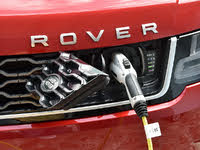 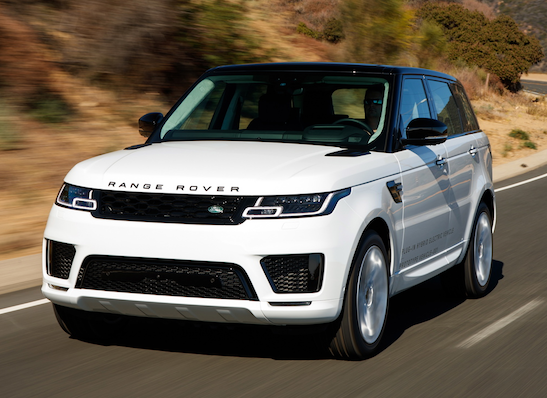 When you think of a plug-in hybrid electric vehicle (PHEV), the image of a dorky little hatchback car probably pops into your mind. The new 2020 Land Rover Range Rover Sport PHEV, however, is an entirely different kind of electrified vehicle. Land Rover says it retains all of its traditional land-roving capabilities while delivering greater efficiency. Based on our week-long test in this SUV’s natural habitat (the swanky suburbs of a big city), it does get remarkably good fuel economy. 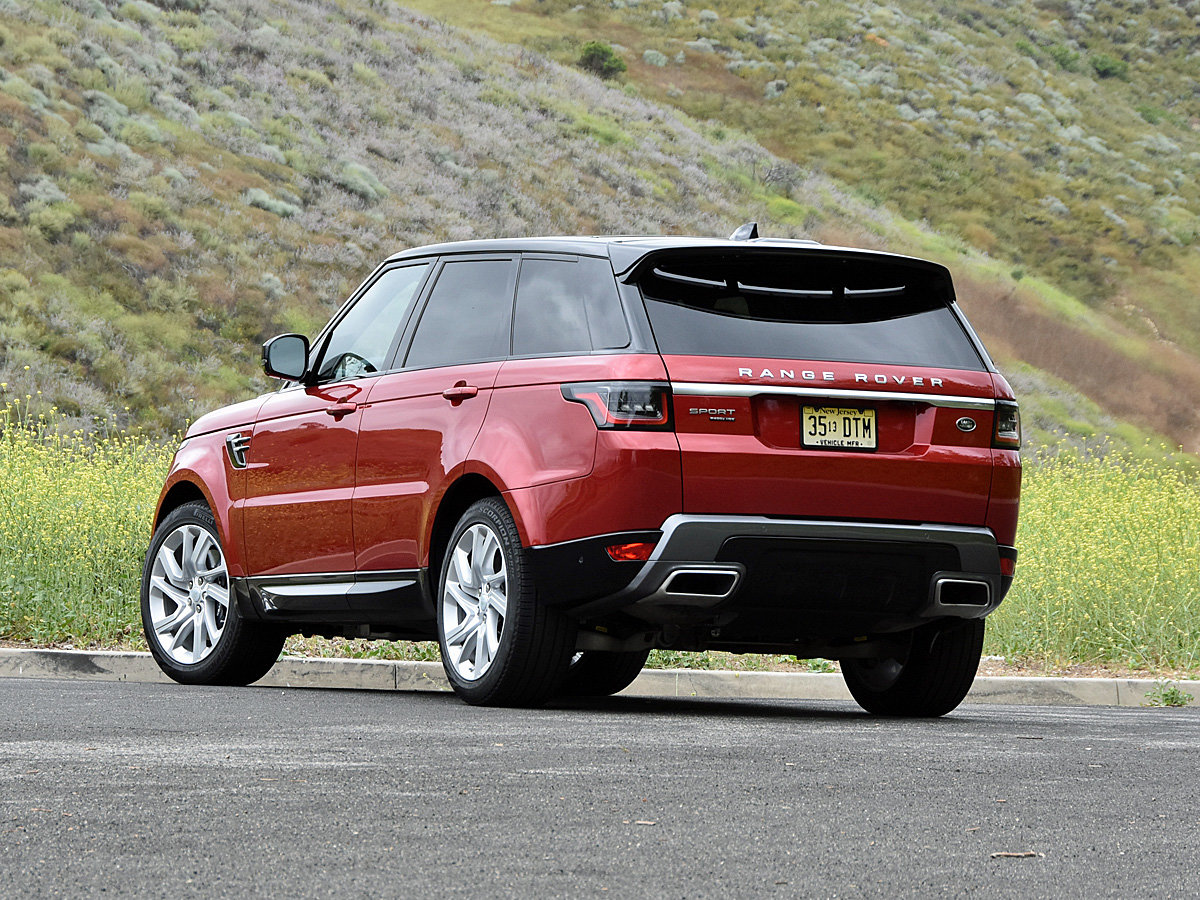 Aside from a subtle “P400e” badge on the tailgate, you can’t tell a Range Rover Sport PHEV from other versions of the SUV. It doesn’t get any gratuitous styling changes, aerodynamic trickery, or a charging-port door on one of its fenders. Instead, the charging port is deftly integrated with the grille. Unless you’re told where it is, you’d never know.

Personally, I like this approach. Land Rover understands that design is a key decision factor when people choose a new vehicle, so it's best not to muck it up with extraneous details that could make the PHEV less appealing. After all, the powertrain already adds $4,750 to the price.

My test vehicle included almost $13,000 in options, and with a $1,295 destination charge totaled up to $93,200. Among the upgrades, the gorgeous Firenze Red paint, black roof, and attractive 21-inch aluminum wheels are worthy expenditures. Combined with the Range Rover Sport’s inherent good looks, these options lent the SUV plenty of presence.

Inside, quality materials permeate the cabin. Everything you see, touch, and use is an accurate reflection of the window sticker. Things don’t always work that way, however, which I’ll explain in this review. 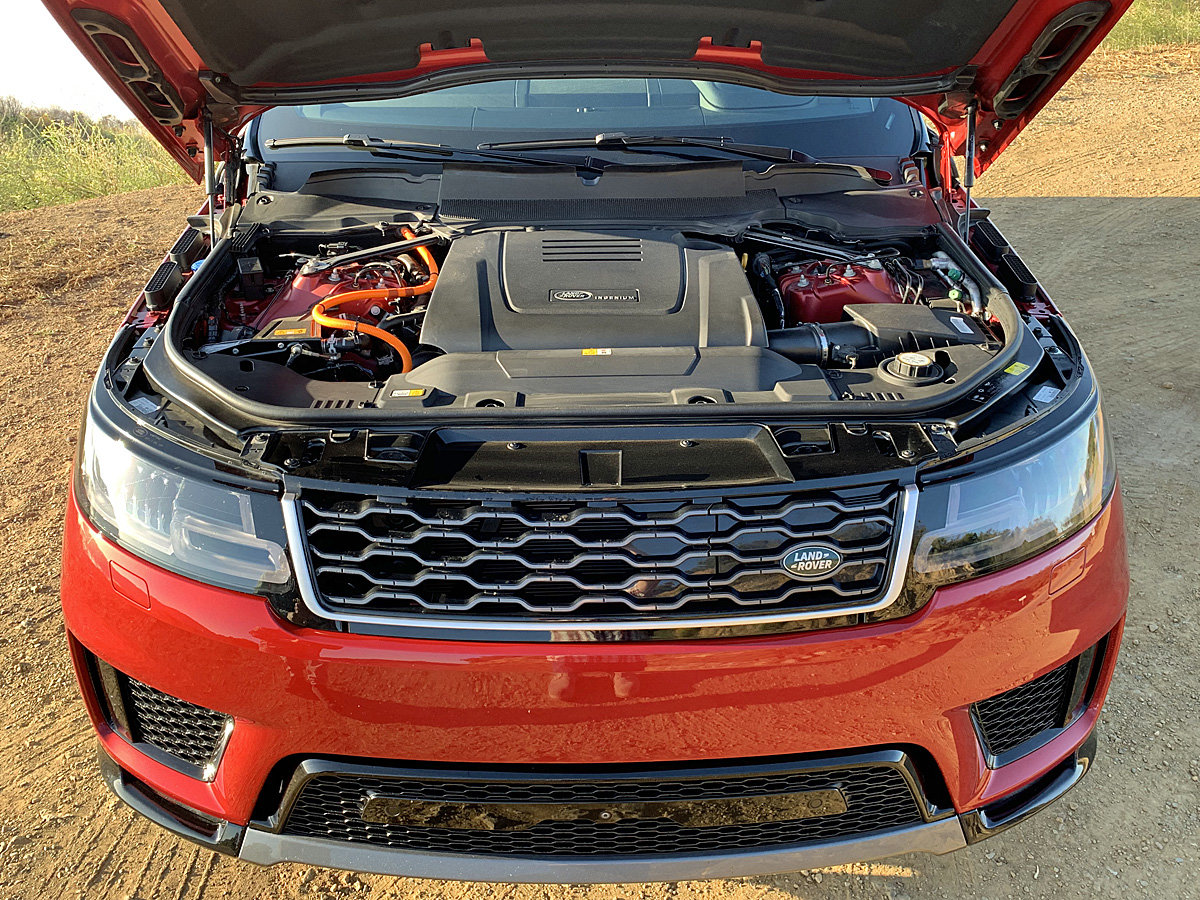 Land Rover says the Range Rover Sport PHEV will deliver up to 31 miles of all-electric driving range. Now, I don’t know why my test vehicle wouldn’t do that, but my Range Rover Sport's inability to remain in EV mode proved frustrating.

To set the stage, the Range Rover Sport PHEV combines a turbocharged 2.0-liter 4-cylinder gasoline engine with a 141-hp (105-kW) electric motor and a 13-kWh battery. Together, these components produce 398 horsepower and a stout 472 pound-feet of torque, ensuring speedy acceleration when needed, combined with electric operation when wanted.

When you climb aboard and start the Range Rover Sport PHEV, you'll find that the car defaults to its gas-electric hybrid driving mode; you're running the gasoline engine, but it's being assisted by the electric motor and battery. If you want pure electric driving, press the EV mode button on the center console. It illuminates with orange backlighting, and away you whir.

Starting off on my testing loop, I chose EV mode in order to see if the SUV could deliver on Land Rover's promised 31 miles of electric driving. However, the gas engine fired up before long. I don’t know what caused this. It could have been because I was running the climate control system. It could have been from excessive acceleration or some of the hills in my area of Los Angeles. The bottom line is that I was unable to determine the Range Rover Sport PHEV’s true EV driving range.

Beyond this, as I attempted to sort things out by turning the EV mode off and on again, the drivetrain seemed to get confused about what it ought to be doing. Once I quit fiddling with the button, the SUV calmed down and went about its business, evidently unconcerned about my desire to operate solely on electricity.

At the moment the trip computer showed zero miles of remaining EV range, I’d traveled 28.4 miles and the SUV was averaging 41.9 mpg. At the end of my 60-mile loop, which includes mountain driving, the Range Rover Sport PHEV averaged 25.5 mpg. That’s a 6.5-mpg benefit over the combined-driving EPA rating for last year's model with a supercharged 3.0-liter V6, and a 1.5-mpg improvement over the turbodiesel.

That sounds good until you consider the new turbocharged inline 6-cylinder engine Land Rover has begun using as the standard powerplant in the 2020 Range Rover Sport. It’s a mild-hybrid powertrain, with light electrification that helps improve efficiency. Official EPA ratings for this new engine were unavailable as this review was published, but I’d bet it will get more than 20 mpg in combined driving, erasing some of the PHEV trim's appeal.

Moving on to driving impressions, the Range Rover Sport PHEV provides quick acceleration, and its standard adaptive air suspension, various driving modes, and upgraded 21-inch wheels and tires helped it feel unexpectedly athletic on a mountain road, yet comfortable to drive for long stretches of time on highways. The steering isn’t slow like Land Rovers of yore, but it’s not fast, either. Also, in spite of this SUV’s 5,400-pound curb weight, the regenerative brakes worked effortlessly. They are grabby, however, making it hard to execute smooth, clean stops.

As far as recharging the battery goes, this proved another source of frustration. Land Rover says it takes 14 hours to fully recharge the Range Rover Sport PHEV when using a standard household wall outlet. But on several mornings I found the battery at only 75% capacity despite having left the SUV plugged in for at least that amount of time.

My advice is to forget about this SUV’s EV driving mode and attempting to maximize travel solely on electricity. Plug it in when you can, drive it in the default gas-electric hybrid mode, and save yourself the confusion and frustration. 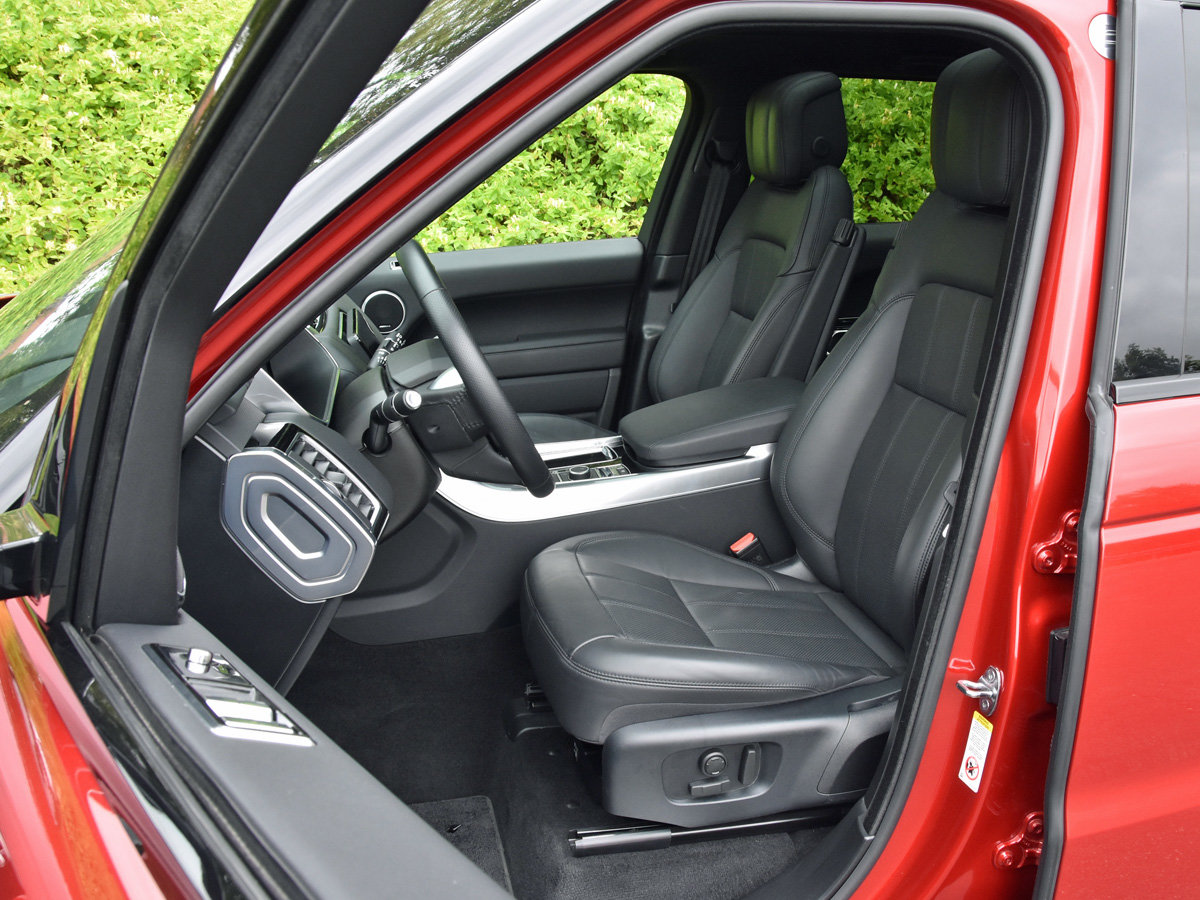 In addition to its higher price tag, the Range Rover Sport PHEV suffers a shortage of cargo space. Land Rover houses the battery beneath the vehicle's raised cargo floor, shrinking the standard version’s already tight 27.5-cubic-foot space behind the back seat. Worse, anything you carry back there threatens to fall out when you open the tailgate. Be sure to secure anything that can roll.

Aside from its compromised cargo area, the Range Rover Sport PHEV adeptly schleps five people to and fro. There’s not much in the way of practical storage, especially when the SUV is equipped with the optional refrigerated center console bin, but a dual-glove-box design helps.

Front-seat comfort is excellent. Both chairs are heated, ventilated, and offer a wide range of adjustment. That said, they’re also equipped with narrow, adjustable inboard armrests, which proved utterly useless and not nearly as comfortable as the densely padded center console armrest. Note that if shorter people are going to drive or ride in this vehicle on a regular basis, you’ll want to either lower the air suspension or get the optional side steps to make entry and exit easier.

A panoramic glass roof lightened the otherwise somber mood of the black-on-black interior. Gesture control operates the sunshade, but I found it easier to just push the button on the headliner, which worked every single time. 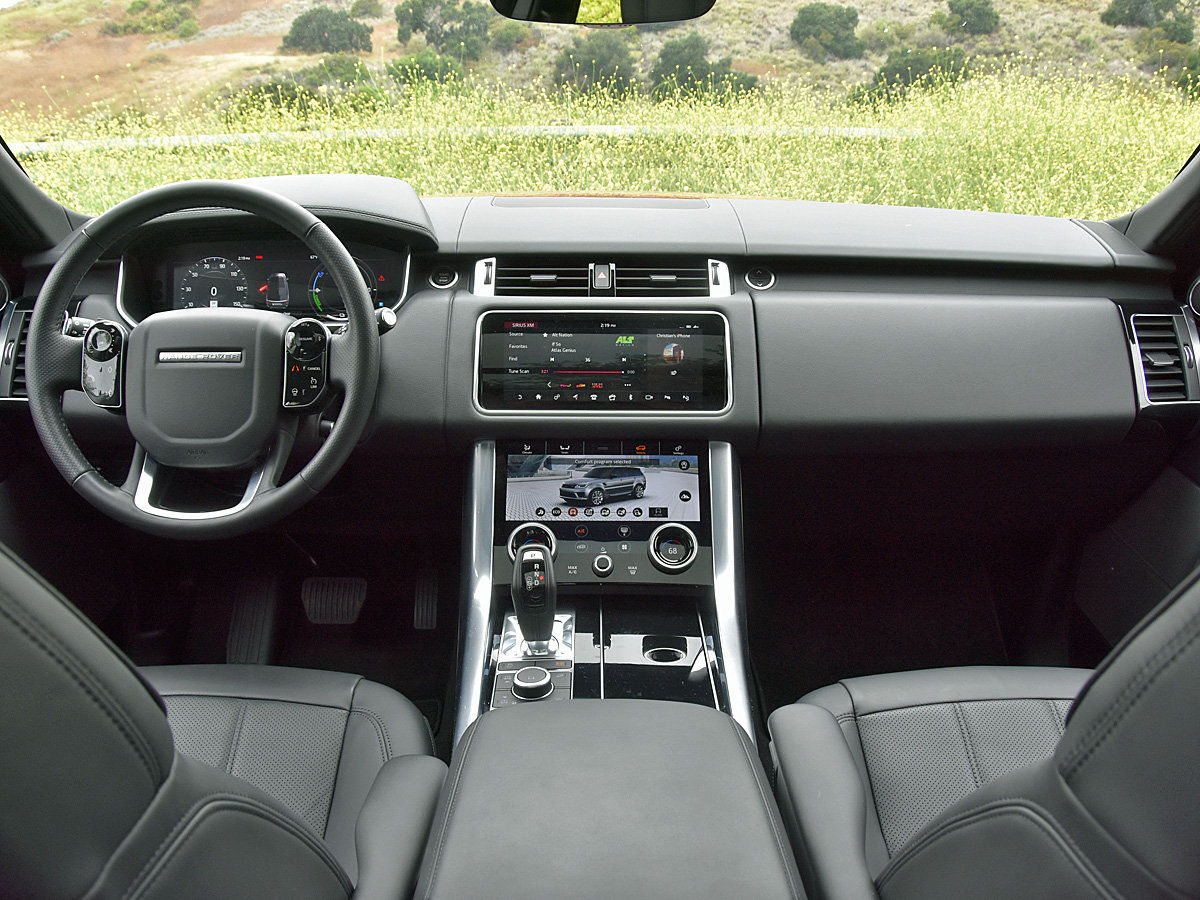 If you’re not adept with technology, forget about buying a Range Rover Sport. You’ll just get angry every time you drive it. And even if you’re comfortable using touchscreens, apps, voice commands, and gesture controls, this SUV still possesses the power to frustrate its driver.

That was my experience, anyway. After spending an hour going through the owner’s manual and setting up the InControl Touch Pro Duo infotainment system to my preferences, I still had occasional trouble trying to recall the best way to go about accessing a specific feature or function. Beyond this, the system would sometimes behave in unexpected ways, showing information I didn’t knowingly request, or exhibiting a delayed reaction to input. The lack of haptic feedback from the touchscreen doesn’t help, either.

No doubt, the Range Rover Sport PHEV is a complex vehicle, and touchscreen technology is the best way to manage that complexity. Also, Land Rover provides easy access to primary stereo and climate functions while retaining a clean and modern interior aesthetic. Just expect occasional befuddlement and bemusement with the technology.

And if you’re a technophobe, find something else to drive. 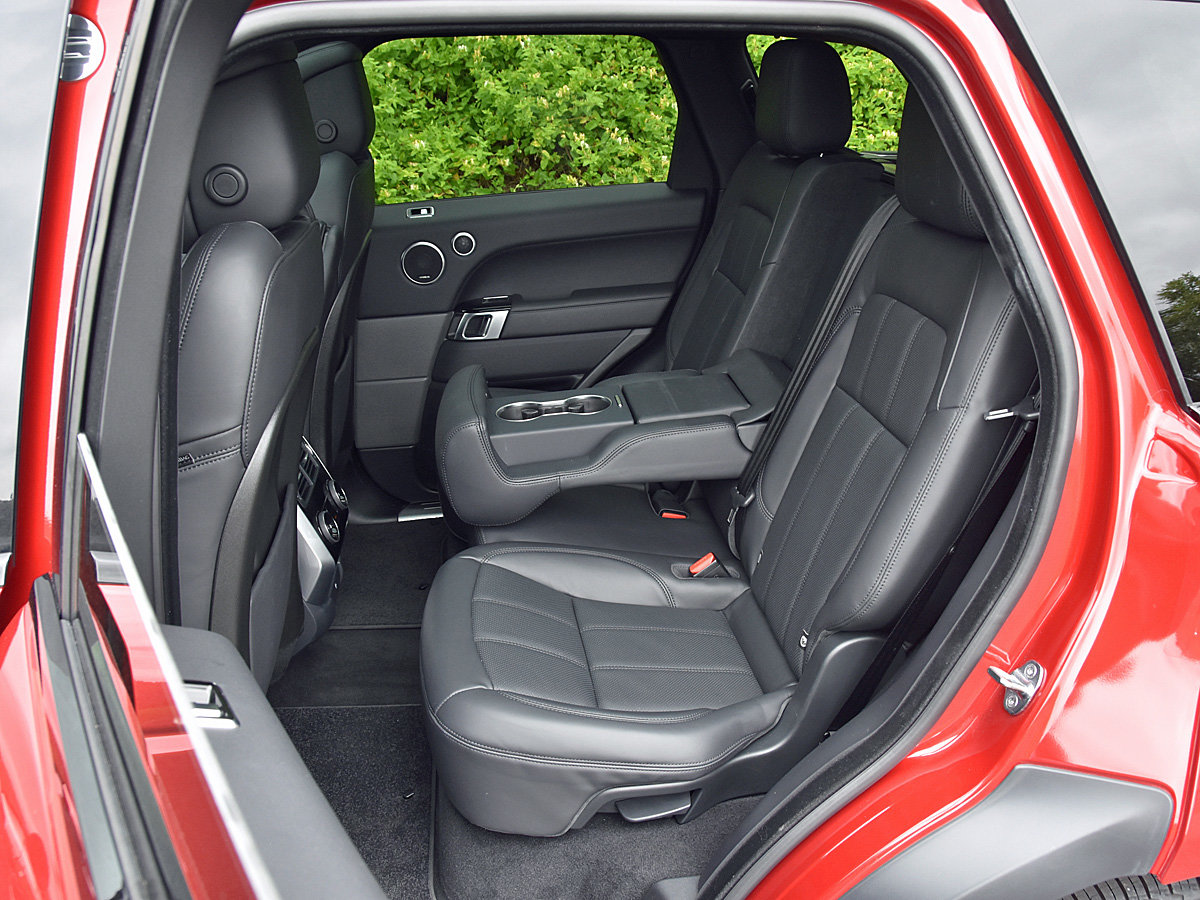 It’s a good thing that the Land Rover Range Rover Sport comes with lots of advanced driver-assistance systems (ADAS), because the onboard technology can easily distract a driver. Then again, so can the new steering-assist system included in the Range Rover Sport's optional Driver Assist Package.

Even with its heavy battery and electric motor helping to lower its center of gravity and its adaptive air suspension working to limit excessive body motions, the Range Rover Sport PHEV suffers from head-toss. That’s a reference to how the driver’s and passengers’ heads can waggle when a vehicle with a higher center of gravity travels over uneven pavement.

It is important to drive smoothly to limit this phenomenon, because sudden steering motions can also induce head-toss. But when you’ve got the new steering-assist technology switched on, you’re negotiating a curve in the highway at 70 mph, and the system is aggressively trying to center the Range Rover Sport as you attempt to steer along your chosen line, everyone aboard gets to experience the sensation.

Beyond this, I thought the lane-keeping assist system worked too abruptly. And that’s why I elected to shut these two lane-discipline features off.

Commonly, crash-test ratings for high-priced, low-volume vehicles are unavailable. That’s true when it comes to the Land Rover Range Rover Sport. This rig weighs nearly 5,500 pounds, though, making it heavier than almost every other car or SUV on the road. And in a collision, mass matters. 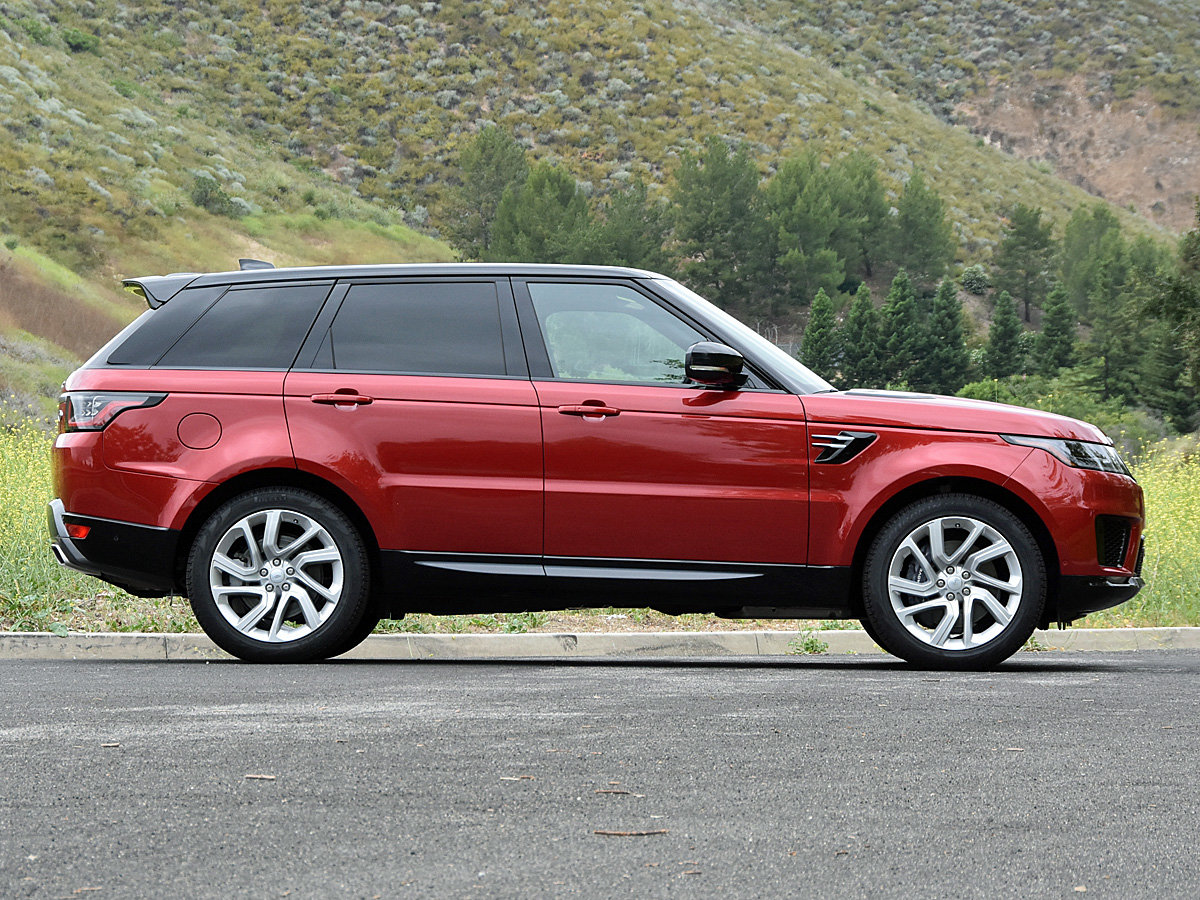 Nobody buys a Range Rover Sport for its cost-effectiveness unless they're looking for a lower-priced flagship Range Rover. Therefore, the new PHEV version isn’t about saving money through greater efficiency.

Neither is it about proclaiming to society that you’re an ecologically sensitive member of the tribe. In this price class, anyone significantly concerned about the environment is buying a Tesla Model X with the standard-range battery, which uses fewer of the precious metals that the long-range and performance battery packs require.

Rather, the Range Rover Sport PHEV is about environmentalism combined with off-road adventuring. It’s about taking frequent short trips mainly using electricity or saving the battery charge for use in specific situations. It’s about fewer carbon emissions through improved overall fuel economy. And it’s about all of these things while flying under the radar.

What's your take on the 2020 Land Rover Range Rover Sport?

Users ranked 2020 Land Rover Range Rover Sport against other cars which they drove/owned. Each ranking was based on 9 categories. Here is the summary of top rankings.

Have you driven a 2020 Land Rover Range Rover Sport?
Rank This Car