Looking for a Used CR-V Hybrid in your area? 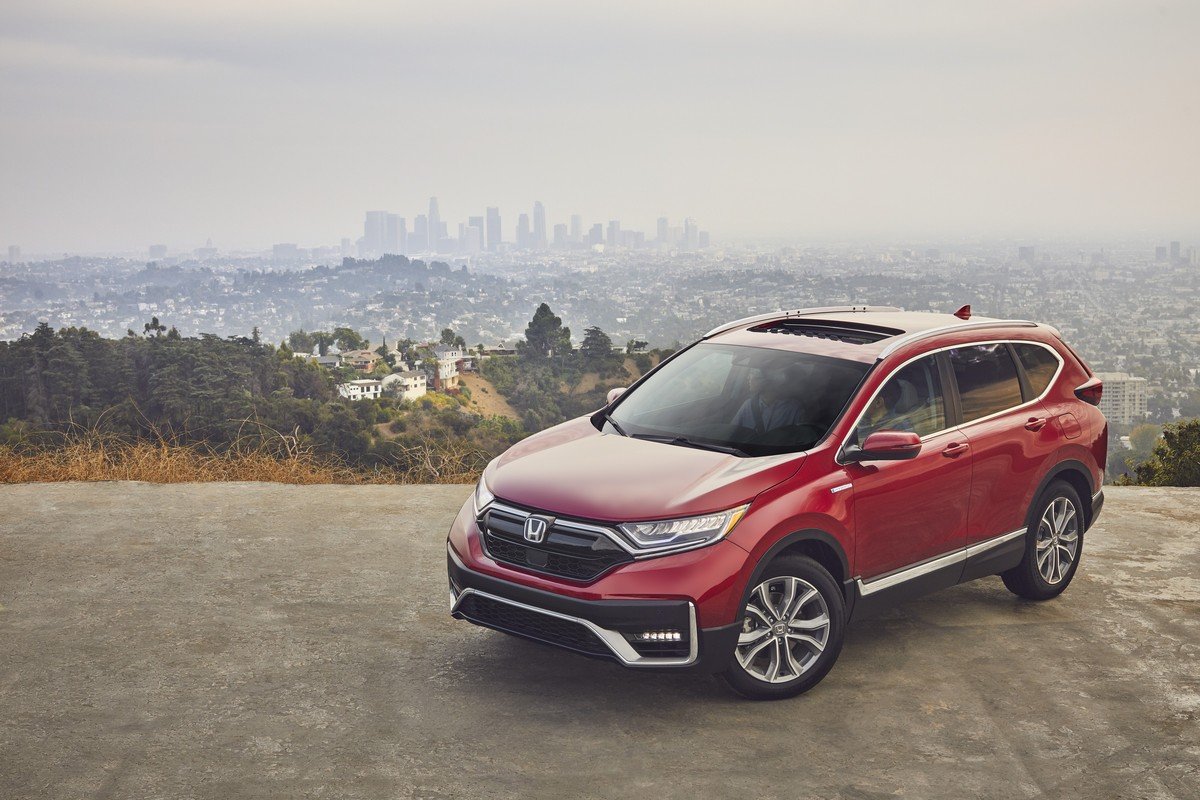 One of the forerunners to today’s seemingly never-ending onslaught of crossover SUV debuts, the Honda CR-V entered the market when SUV meant body-on-frame truck and CUV meant, well, nothing. The year was 1996 and the only other crossover option in the U.S. was the Toyota RAV4, which went on sale the year prior. Since then, hybrid technology has become commonplace. Yet, Americans have lived without a battery-assisted Honda crossover. That finally changes, with the debut of the 2020 Honda CR-V Hybrid. 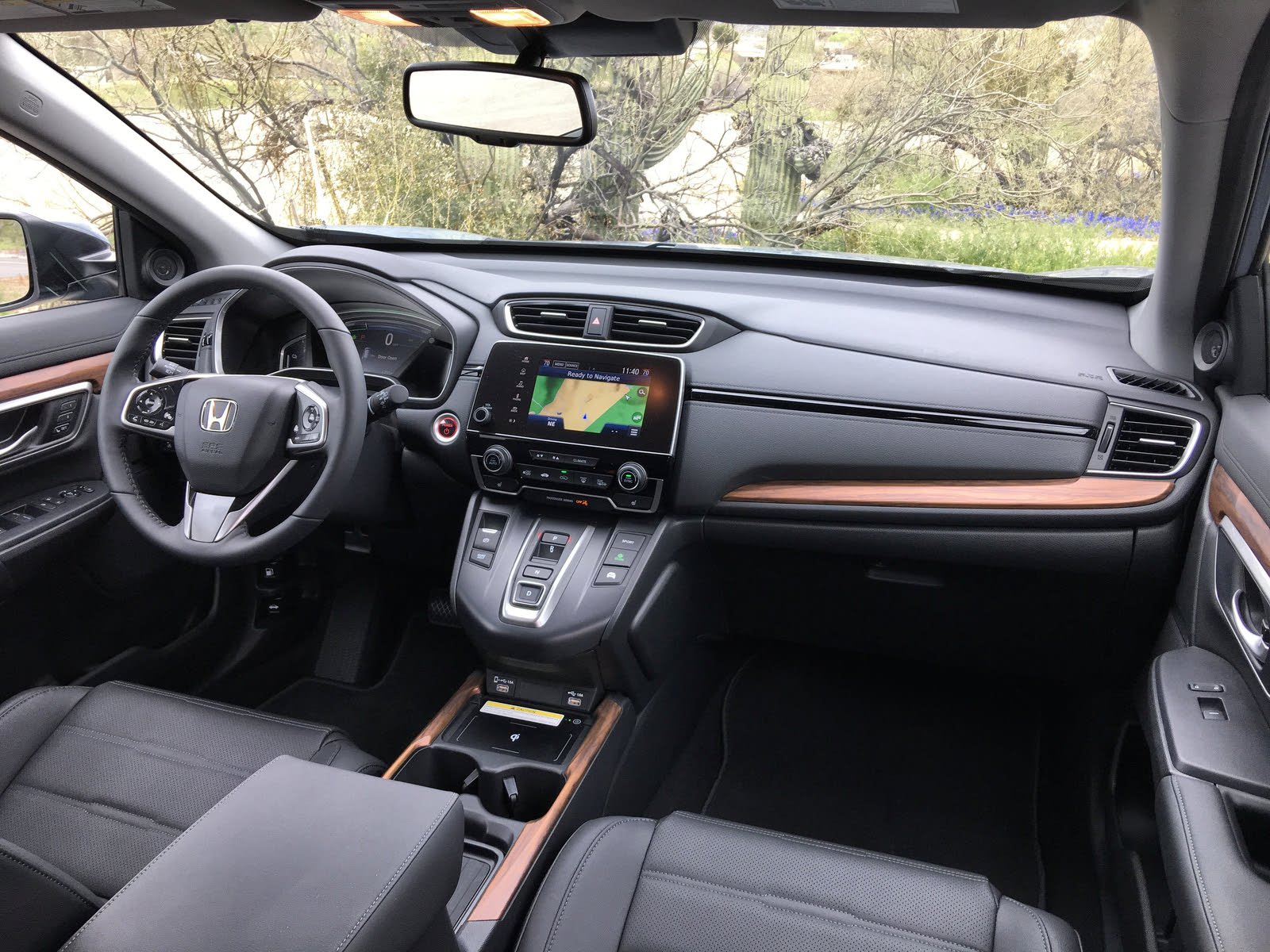 Having been all-new for 2017, the 2020 Honda CR-V enjoys a mid-cycle refresh—one that includes its first-ever hybrid model. The hybrid is a visual and dimensional twin to the gasoline-powered CR-V. Length, width, and height figures are exact (182.1, 73.0, and 66.5 inches, respectively). Even the 19-inch alloy wheel pattern of our Touring test car was the same. Interior-wise, we find the same story. The cabin is a blink-and-you’ll-miss-it carryover. The hybrid features the same dash and multi-function center console. The 7-inch infotainment screen, the steering-wheel-mounted functions, and the driver information panel are unchanged as well.

From afar, squinting is required to notice the differences. But the distinctions are there, even if fraternal.

Exterior badging is the quick giveaway. CR-V hybrids feature blue-outlined Honda emblems and “Hybrid” designations on the A-pillars and tailgate. A rear lower bumper that features a hidden exhaust arrives as a subtler styling change. Also, EX models and above are outfitted with LED fog lights, which aren’t available on gas versions.

On the inside, the gear shifter has been replaced with a push-button gear selector. This coincides with Honda’s other available hybrids, the Accord and Insight. In the name of fuel-efficiency, paddle shifters no longer shift gears, but instead adjust the brake regeneration aggressiveness. And although the instrument panel doesn’t change, the information does. It now reflects the vehicle’s driving modes, which are Normal, EV, Econ, and Sport. 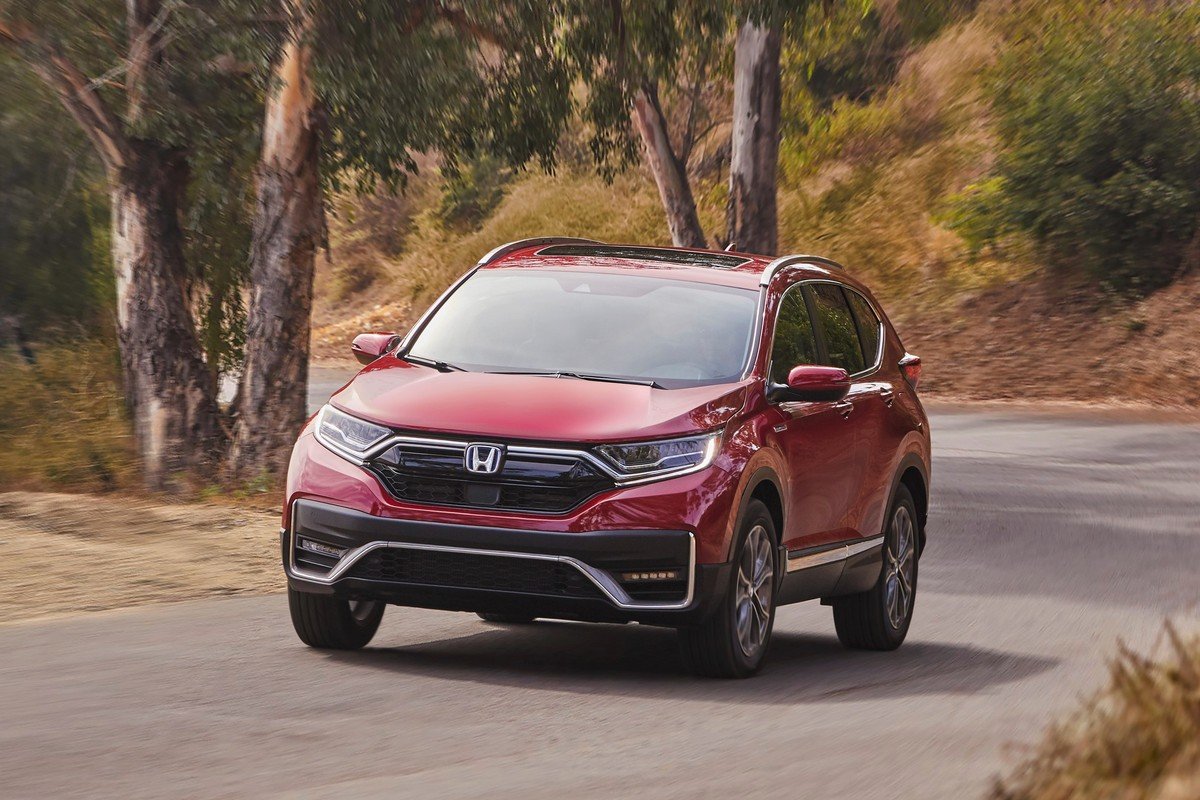 All 2020 Honda CR-V Hybrid models come equipped with all-wheel drive (AWD) and feature a two-motor hybrid system powertrain. The CR-V Hybrid combines a 2.0-liter 4-cylinder gasoline engine with an electric generator/starter motor and a propulsion motor. These systems work together to propel the vehicle, removing the need for a conventional automatic or continuously variable transmission. In terms of gearing, the CR-V Hybrid is tuned with four fixed-ratio gear sets and a lock-up clutch.

The fuel economy difference between the two is night and day, too.

The hybrid is EPA-rated at 40 mpg city, 35 highway, and 38 combined. A comparable AWD gas model doles out 27/32/29. In-house, the fuel savings advantage is obvious. However, versus its only competitor hybrids—the Ford Escape and Toyota RAV4—the Honda CR-V Hybrid ranks third.

Tooling around Tucson, Arizona, with our CR-V Hybrid Touring AWD test car, I saw nearly 41 mpg during a 65-mile city drive. Temperatures were near 70F, but no fuel economy tricks were employed. No hypermiling. No excessive coasting. No only-Econ-mode driving. In fact, all drive modes were tested, with Sport being the most preferred due to its more exuberant torque and throttle response.

Regarding EV mode, the system operates on electricity alone for up to only a mile. Even then, doing so requires a specific checklist of variables such as battery strength and acceleration. The CR-V Hybrid switched out of EV mode easily and often enough to render it almost silly. Great for parking lot trolling, I suppose.

Other than the brake-regen adjustments, not much else is offered in terms of driving options with the CR-V Hybrid. The RAV4 offers an additional Trail mode, while the Escape offers four selectable EV-specific settings. Ride comfort and handling are as I expected with the CR-V: stiff leather seats but good steering feel.

On roads rough or steady, the CR-V Hybrid was compliant, with the AWD kicking in as needed. And thanks to the hybrid drivetrain’s on-demand torque, it more fun to drive than the gasoline model. But if your daily commute involves long distances, the RAV4 and Escape would be less back- and butt-breaking. 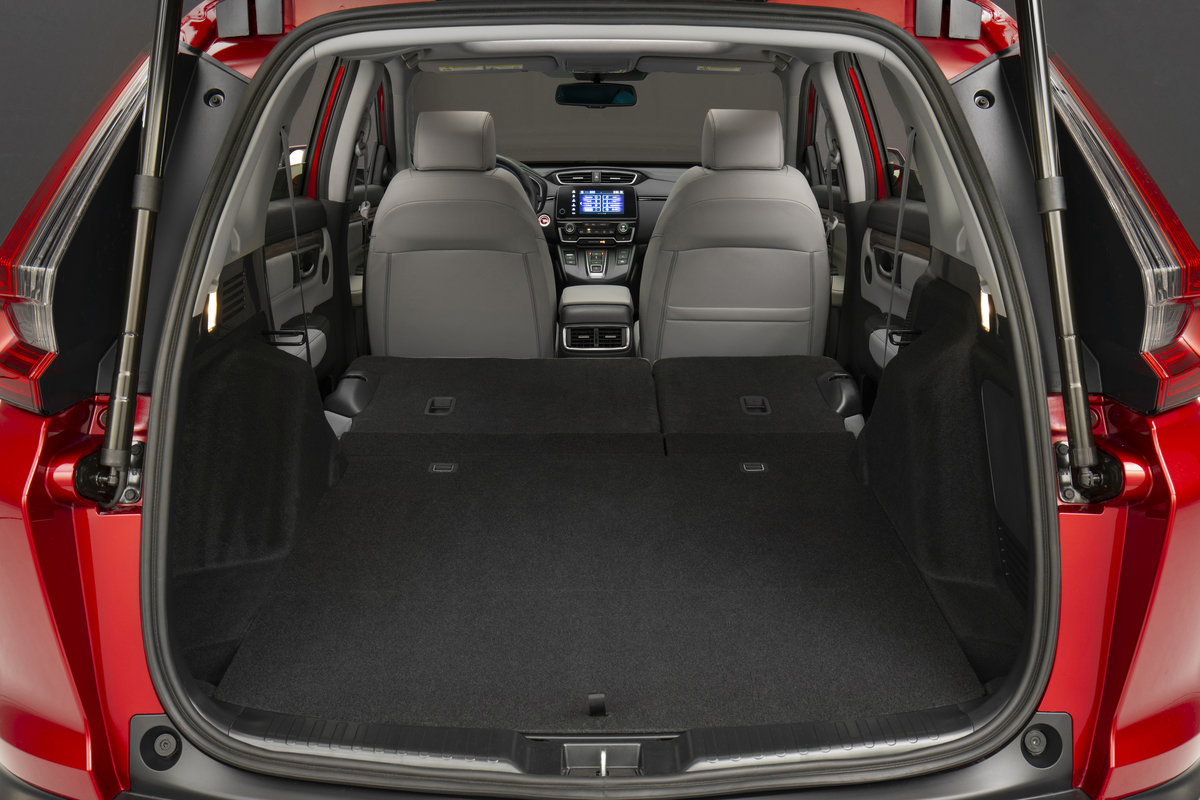 Given that all CR-V models are the same in terms of sheet metal and size, the hybrid is forced to compromise with cargo capacity. In order to accommodate the battery pack, which is located beneath the cargo floor, the CR-V Hybrid offers 33.2 cubic feet behind the rear seats and up to 68.7 cubic feet when they are folded flat.

Although a drop from the non-hybrid’s 39.2 and 75.8 cu ft, the CR-V Hybrid still offers more volume than the Ford Escape Hybrid. The Toyota RAV4 Hybrid takes the rear-seats-up cargo crown with a cavernous 37.6 cu ft. When folded down, its numbers slightly beat out CR-V Hybrid at 69.8 cu ft. But the Honda hybrid does feature one of the lowest cargo floors for easy loading and unloading, while also offering a class-competitive 8.2 inches of ground clearance.

And other than losing some shopping bag space, the CR-V Hybrid maintains passenger comfort by offering more overall space than its direct competitors. The CR-V beats out the Escape and RAV4 variants in front headroom and rear legroom.

The CR-V Hybrid also is equipped with a configurable center console bin, which has a sliding cover than can be pushed upwards and out of the way to hold larger items. A medium-sized gift bag fit into the space easily and wasn’t hampered at all when the armrest was put down. However, speaking of that armrest, its adjustability is perhaps too eager. The sliding feature is great for personalizing comfort, but the locking mechanism on our test car was too loose. Even when leaned on, the armrest slid to and fro without warning. 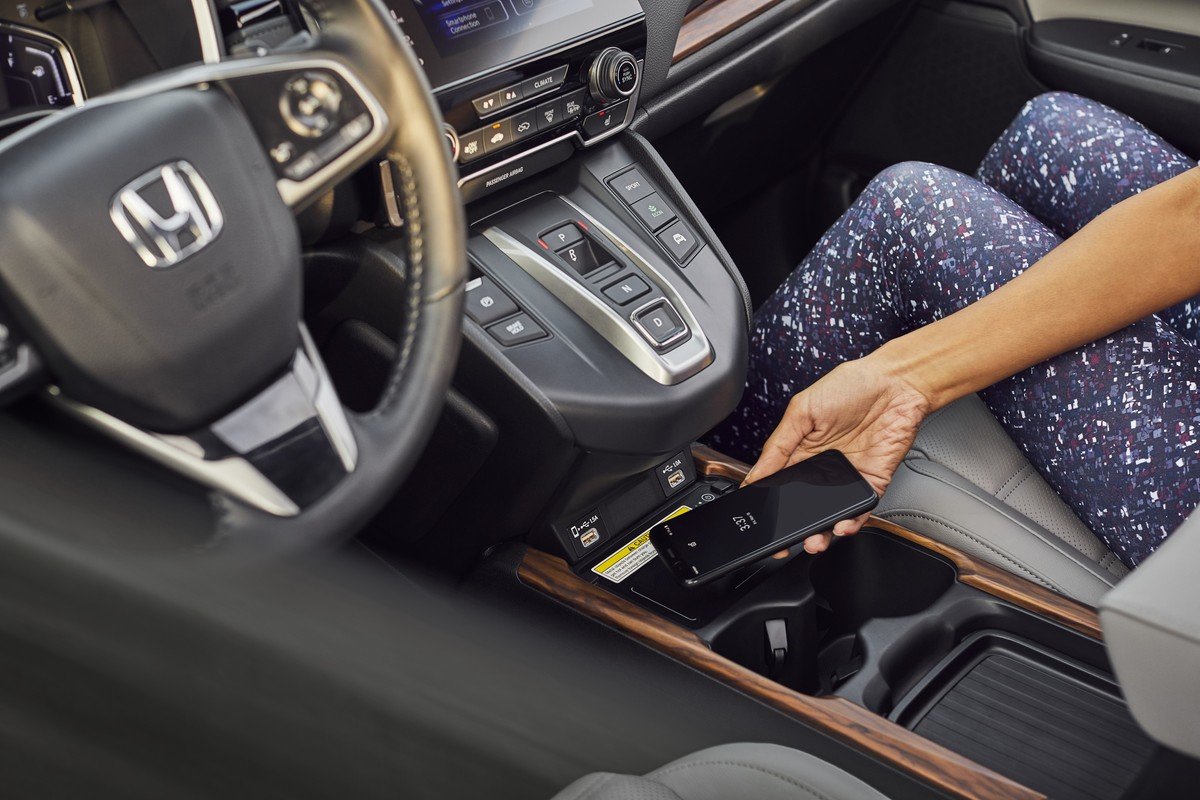 All CR-V Hybrids come standard with Bluetooth connectivity, Pandora compatibility, and a single 1.0-amp USB connector in the front console. Other amenities standard on the hybrid but available only on higher trim levels on its gasoline counterpart include keyless entry/lock, push-button start, and automatic headlights.

Still, the real tech and infotainment goodies don’t start until the EX trim, where a 7-inch touchscreen display, Honda Link, smartphone integration, SiriusXM and HD radio, a 180-watt stereo, and an additional 1.5-amp USB port in the front plus two 2.5-amp USB charging ones in the rear are now standard. Navigation, wireless device charging, and a 330-watt premium audio system are reserved for the top-of-the-line Touring trim.

Fussing about with the information systems does bring about some frustration. As is the issue with most touchscreens, there is no haptic feedback from the CR-V screen. Also, to turn off the automatic beep sound, which occurs on every tapped command or page view, requires the following steps: Home, Settings, Vehicle, and then a long scroll down a couple of pages until you find “Beep.” In contrast, the RAV4 merely requires a quick stop in Settings.

The overly complicated procedures don’t stop there. The same can be said with the instrument panel. Yes, plenty of usable driver and vehicle information is provided, but only after flipping back and forth through the various menus—a distraction in itself while driving. 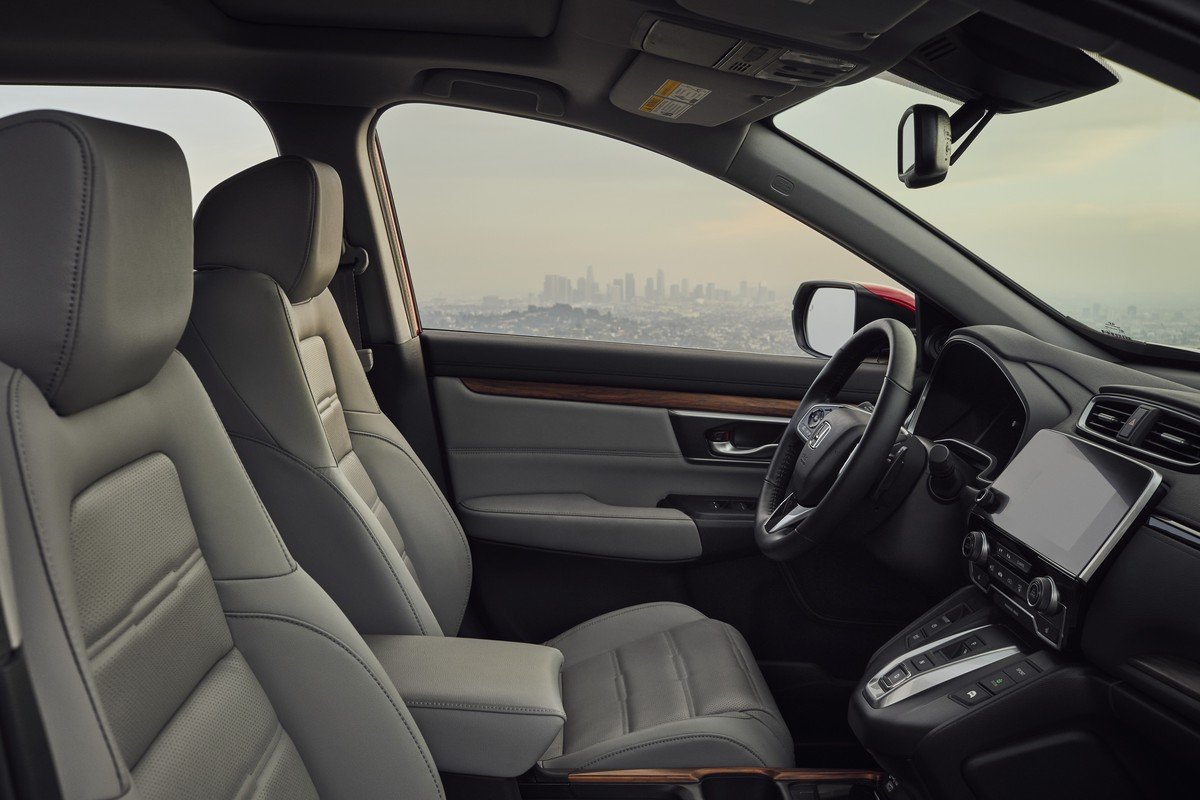 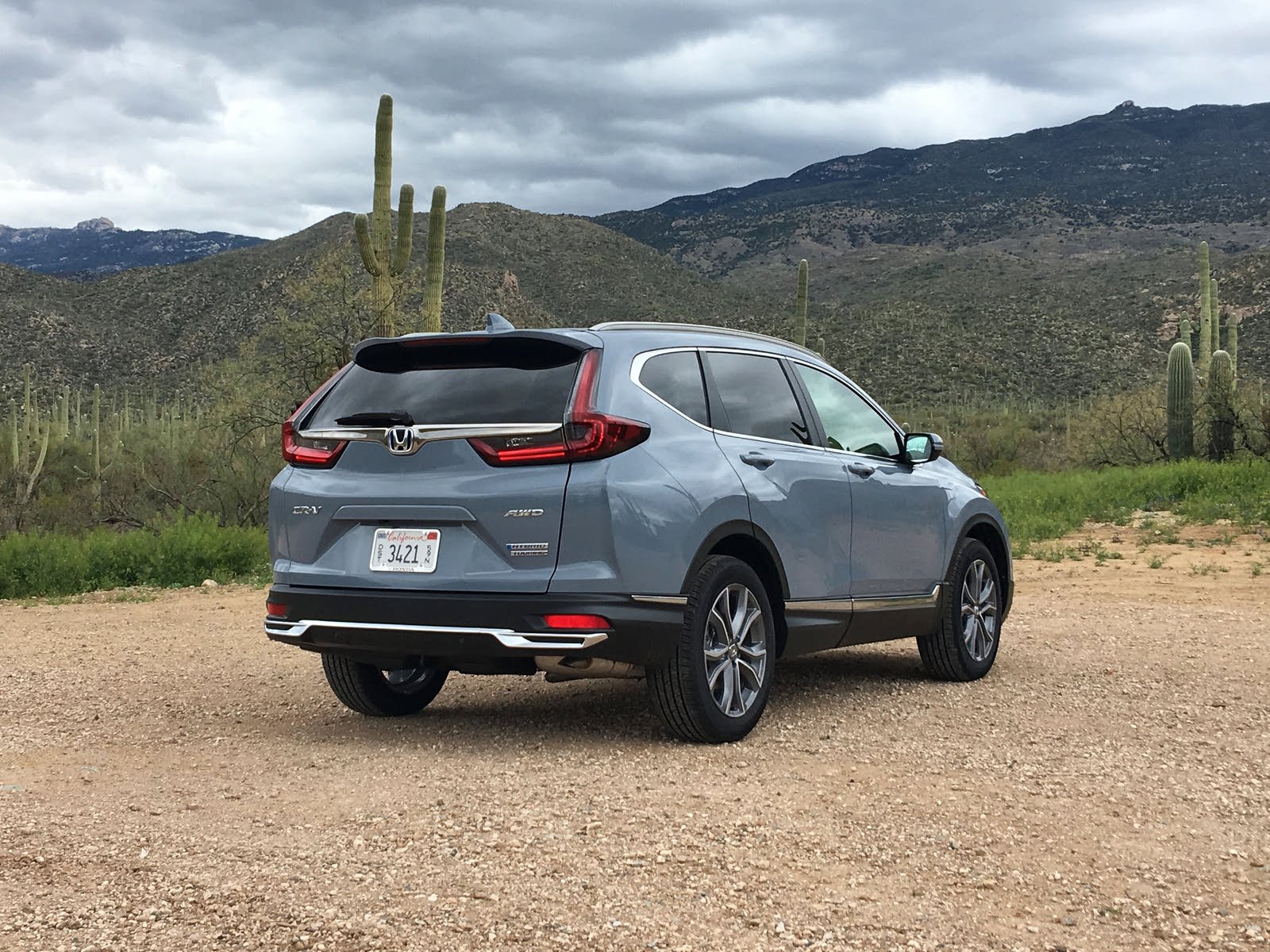 With improved fuel economy, a stouter powertrain, quicker acceleration, engaging dynamics, plenty of standard safety features, and little compromise on cargo and people volume, the CR-V Hybrid is the all-around best CR-V. In terms of which trim makes most budget sense, unless you really need leather upholstery, in-car navigation, and a power-liftgate, the EX is more than enough CR-V to satisfy, and it starts at $30,260—unlike my fully-equipped Touring test car which priced in at $37,070, including the destination fee.

Now when compared to the hybrid models of the Ford Escape and Toyota RAV4, the choice becomes more muddled. The CR-V Hybrid does start at a lower price than the Escape ($29,755 for AWD) and RAV4 ($28,350), but the Escape offers better fuel economy, more technology, and drive modes that truly benefit fuel-efficient driving. And the RAV4 has sleeker styling, is more comfortable, offers better handling, has tons of cargo space, and with ToyotaCare, comes with no-cost maintenance and roadside assistance for 2 years.

At the end of the day, the Honda CR-V is still king in terms of compact SUVs, having sold more than 5 million since its inception. But all three of these competitors sell hundreds of thousands of units each year. All in all, with currently (and surprisingly) only three options in the compact SUV hybrid space, each one has a fair shot at consideration.

Have you driven a 2020 Honda CR-V Hybrid?
Rank This Car

Looking for a Used CR-V Hybrid in your area?

Hello. I have problem with starting my car. In the morning I pressed start button without break pedal, car turned on and started defrozing. When I came back, car was turned off and nothing worked. ...

My key fob locks and unlocks all of the doors, but it will not open my trunk. Does this mean that my battery is dying or is this function broken on my fob?

Just purchase a 2020 AWD Honda Hybrid CRV. It is loud Gutless and frankly unable to do any mountain driving. It can not climb any hills. Frankly enbarrasing to drive. It reminds me og moms 1972 F...

How To Purchase A Car With Bad Credit?