An unknown star in the compact luxury sport sedan market. 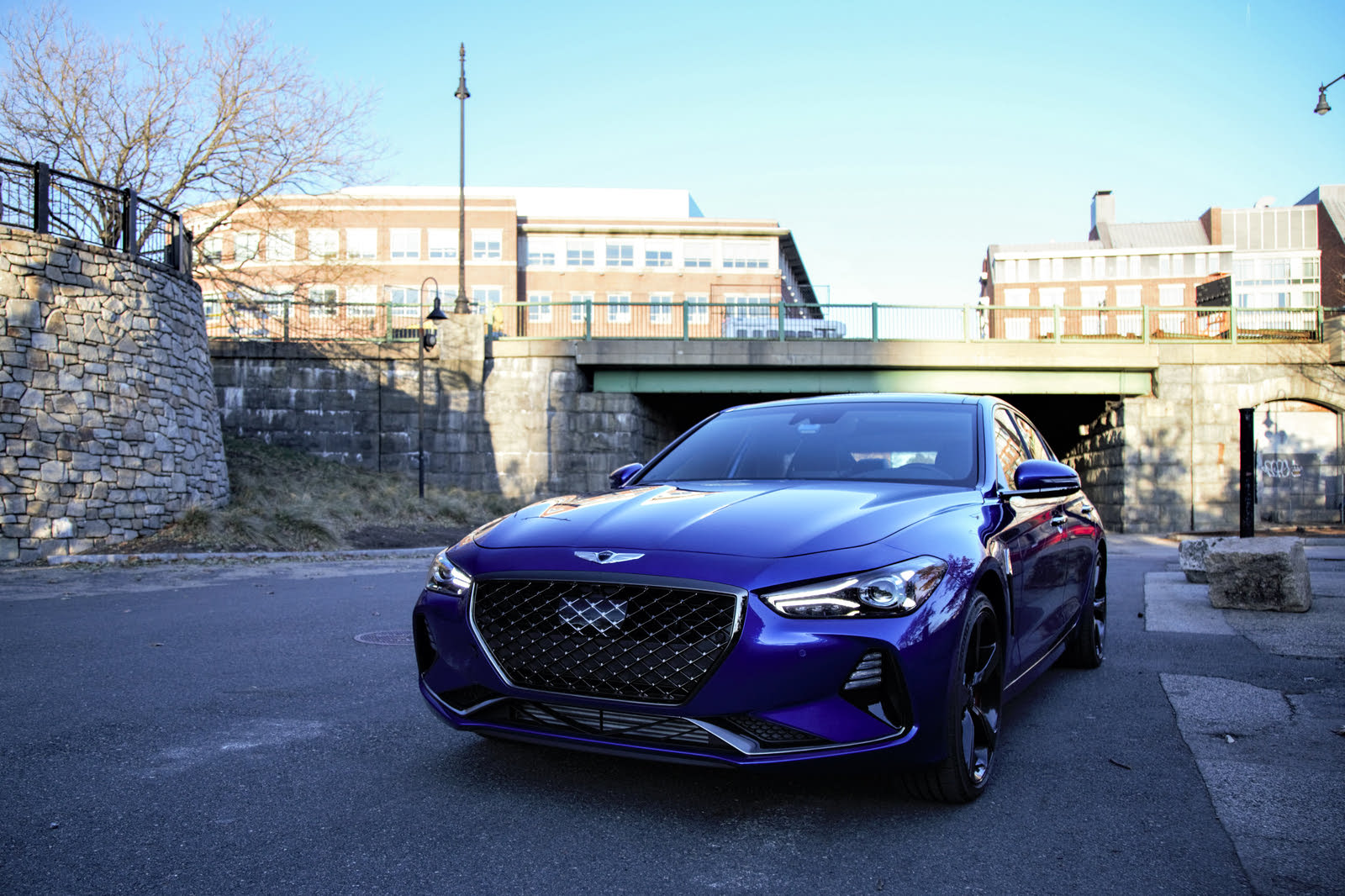 The Genesis G70 has everything going for someone who wants a small, sporty sedan. Speed, sound, style, quilted stitching, valet service—everything that starts with an "s" except status. The mass market doesn't notice Genesis. But this upstart brand, like established brands Alfa Romeo and Jaguar, has an uphill battle to fight against the big players. So what? That's their problem. You get a special car that people will notice and ask about, and you won't find an identical one (or four) parked next to yours. Sprinkle a fantastic warranty on top and boom, the deal's done. 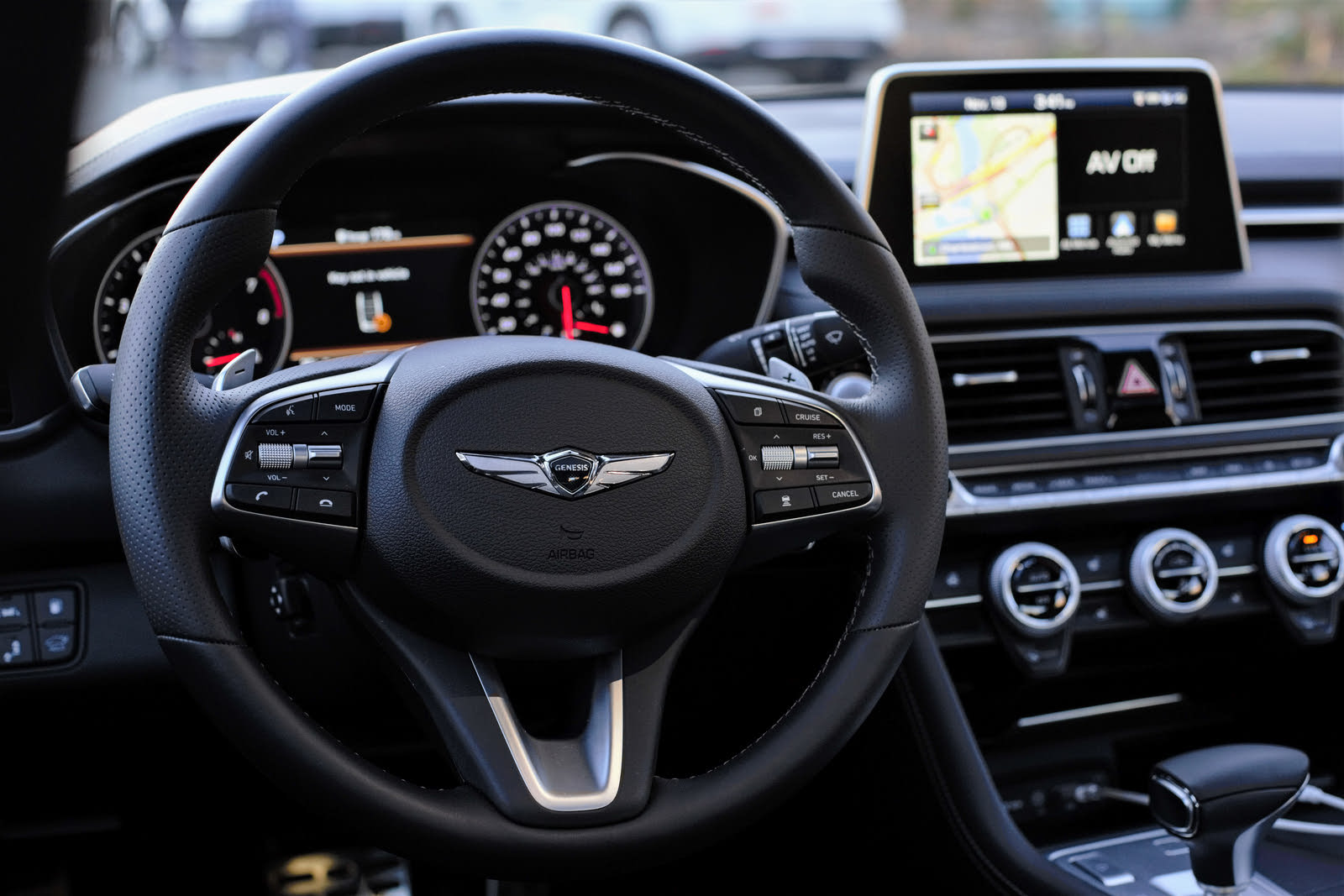 The 2019 Genesis G70 was the first all-new Genesis built from scratch. Nothing changes for 2020 or 2021, not until the young luxury brand applies its newfound double-bar lighting, seen on the 2020 G90 and 2021 GV80, for the G70's 2022 refresh. While it shares engines and the basic chassis with the Kia Stinger—another fine-looking machine—the G70's styling looks like nothing else in the Hyundai-Kia empire. It has all the poise of the segment's best-seller, the BMW 3 Series, with a low-slung stance, short tail, long hood, and enough (but not too much) surface detailing to guide and capture the eye around the chrome brightwork, like the crosshatch grille and side blade on the front fenders.

The G70 3.3T Sport we tested is to our taste, and it's more aggressive than the G70's 3.3T Prestige trim level. On gray, five-spoke, 19-inch wheels announcing red brake calipers and staggered size tires, and with the car's chrome trim bronzed and darkened, the G70 urges you to step inside.

There's more impressive style when you do. Prestige and Sport models add quilted Nappa leather on the seat inserts and curved on the doors—they're high quality and as rich to the touch and beautiful to observe as you'd find in a loaded-up Mercedes-Benz, Audi, or BMW. Piping on the seats, contrast stitching running down the side of the dash, and a few splashes of aluminum trim make the cabin feel significantly above its pay grade. Lower trims lose this soft leather and the quilting, but the effect is the same. Quality is evident, from the silver-painted switches to the knurled dials and blue-faced instruments. Twist the driving mode dial, and it returns to center, nice and damped. Only the infotainment system's 8-inch touchscreen feels out of place, with its small size and cheesy graphics. But that's a stretch. The G70 invites you back, and you won't get tired of saying yes. 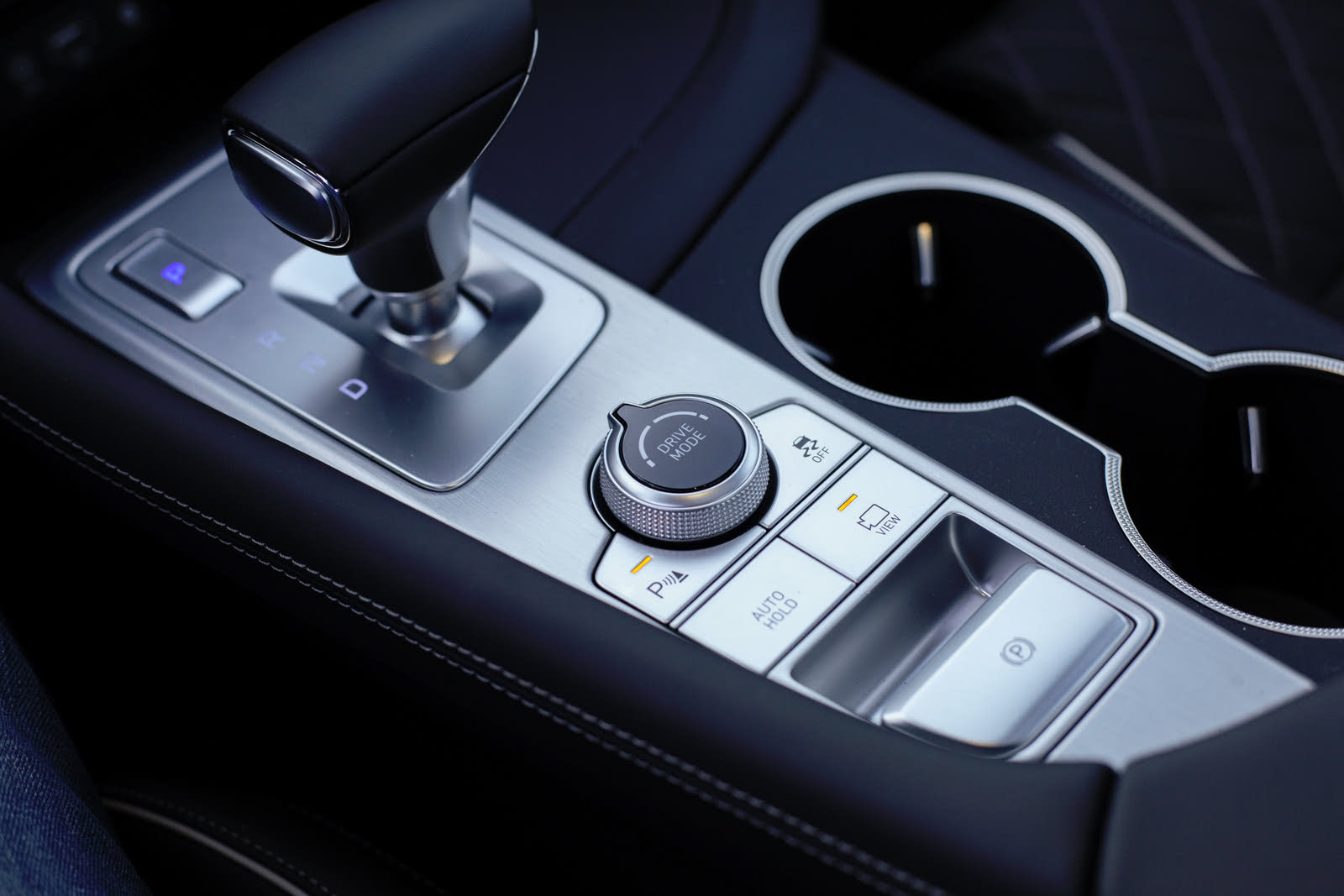 The G70's optional 3.3-liter twin-turbo V6 commands almost $10,000 more than the single-turbo inline-four. You very much get what you pay for. What you get is a punch in the chest and the deep satisfaction—echoed by the deep, throaty exhaust—of reaching speed without exertion. With the 3.3-liter V6, there's 376 pound-feet of torque at just 1,300 rpm, so right off the line, the G70 straight rips, and its 365 horsepower ensures the fun doesn't quit. This is a real sport sedan. It sounds great, it pulls hard, and the road noise is muffled enough to trick passengers into believing they're cruising at 65.

The eight-speed automatic transmission kicks down quick and knocks off decent shifts, but it's not so quick as the ZF unit found in the BMW 3 Series, and the Sport driving mode is not so smart that it anticipates sudden stabs of the throttle seconds after backing off into a calm cruise. Interestingly, there's another mode called Smart that claims to automatically detect whether you're driving normally or aggressively, but in our testing, it always felt like the G70 was in Comfort.

Where the transmission may lag, the steering and suspension put that criticism to bed. A limited-slip rear differential is standard on all V6 models. The Sport's two-stage adaptive dampers and wider rear tires put the power down in the tightest of curves, while the steering is impeccable for a modern car with an electric power assist. The feel and precision are up there with the greats, like the Alfa Romeo Giulia. Ride quality is always composed and never shaky. Hyundai had no idea how to build a setup this well-sorted just five years ago, but with its first compact rear-wheel drive (RWD) platform, it has excelled.

RWD is another reason the G70 feels so balanced, as the weight of the car's powertrain is more evenly distributed than that of a front-wheel drive (FWD) car. All-wheel drive (AWD) with torque vectoring to slow the inner wheels around tight turns is optional on every G70 except the G70 2.0T Sport, which is the only G70 available with a six-speed manual transmission. While we've yet to test that version, it's awesome that it exists.

Back to the base car: It comes with a 2.0-liter turbo four-cylinder engine with 252 hp and 260 lb-ft of torque at an equally low 1,400 rpm. Satisfactory numbers from a practical powertrain, no doubt. But in terms of vibration, noise, and general power, it's a pipsqueak next to the sonorous I4 in the BMW 330i. Really, no one else but BMW and Honda can make a great turbo-four that makes the driver not want a six, so this isn't really the fault of Genesis. But what it does do is make the performance gap very obvious between the two G70 powertrains—and for a car offering that much power when other competitors charge thousands upon thousands more for six-cylinder muscle, you ought to go all the way.

For 2020, Genesis made all-season tires standard on the G70 3.3T Sport AWD we tested, as opposed to summer-only (as now standard on RWD 2.0T and 3.3T Sport models). The Sport also features larger Brembo brakes, the standard car's brakes and suspension are excellent, too. Regardless of drivetrain, the goodness in every G70's chassis is always present. It's just about how fast you want to go. 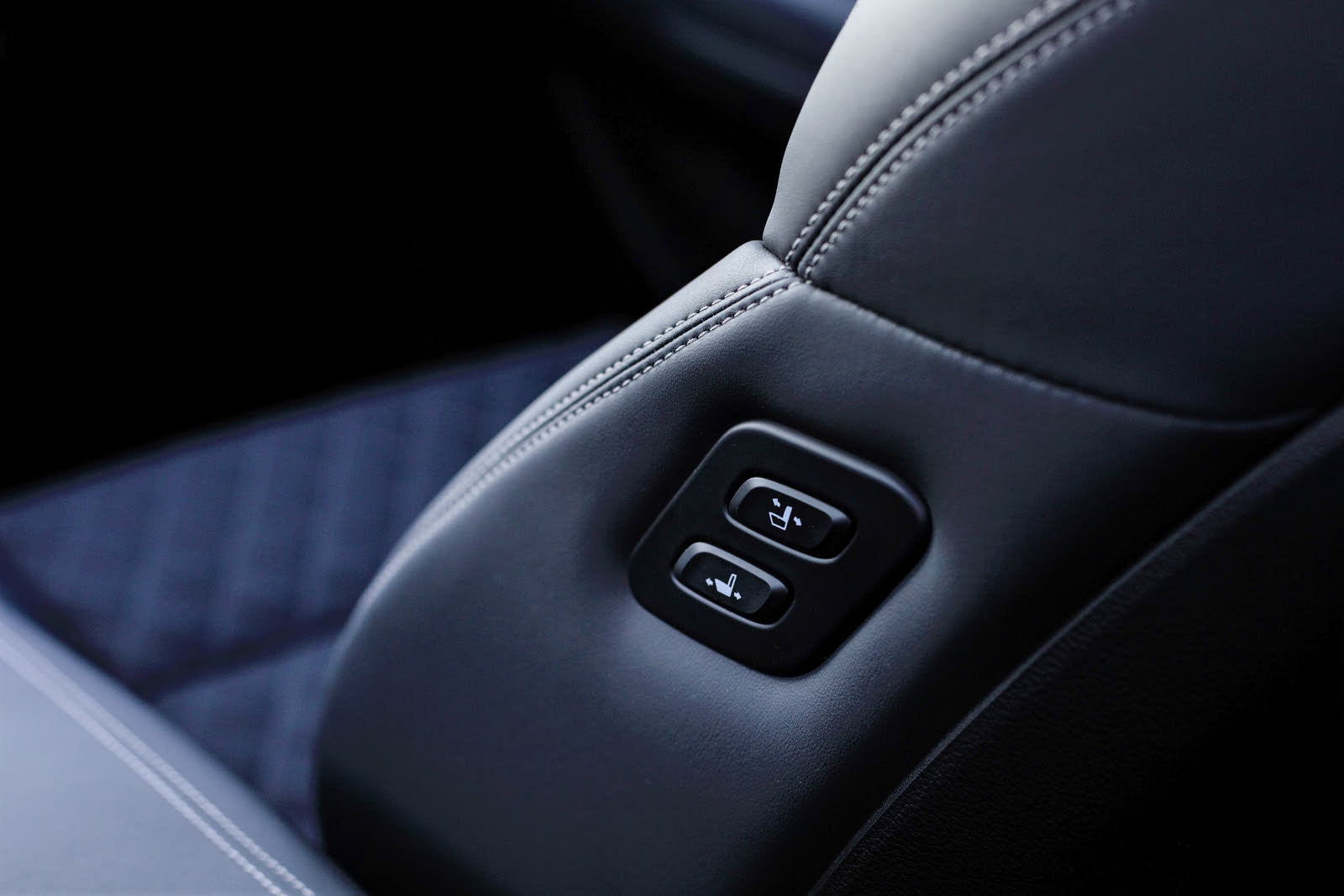 For a new car, the G70 is about as simple and straightforward as can be. Plenty of physical buttons dominate the space. A row of shortcuts for the stereo, nav, settings, and a programmable custom button are sandwiched between two knobs for volume and tuning. Below these, large climate controls pop out with individual buttons for the heated and ventilated front seats, plus two more buttons that appear to hang below each temperature dial. Slide the cover at the bottom of the center stack, which is canted a few degrees to the driver's reach, to reveal a large tray with a wireless charging pad and USB and AUX ports.

Attractive analog gauges flank a large color display in the instrument panel, which can control more vehicle settings and show info like turbo boost. The main touchscreen is fast and easy to swipe around, though the wide-set typeface on the various icons and the small buttons on the map display suffer on legibility. Otherwise, this is an easy car to use.

Rear-seat legroom is on the tight side, though that's overlooked by supportive seats, available heated rear outboard seats with three stages, and central vents. Controls for the front passenger seat are on the left bolster, so the rear passenger or driver can slide it forward—weird in a compact sedan, and weird that the passenger seat moves in 12 ways versus the 16 on the driver's side, yet helpful. Also, when activating Sport mode, the driver's seat bolsters inflate to hug you on those tight corners you'll be carving (or that one exit ramp). The trunk, with 11 cubic feet of cargo space, is tiny by any measure. Visibility is good in all directions, and thankfully, conveniences like a proximity key fob and garage door openers come standard. Leatherette comes standard, while leather and a softer Nappa leather paired with a soft headliner are optional. 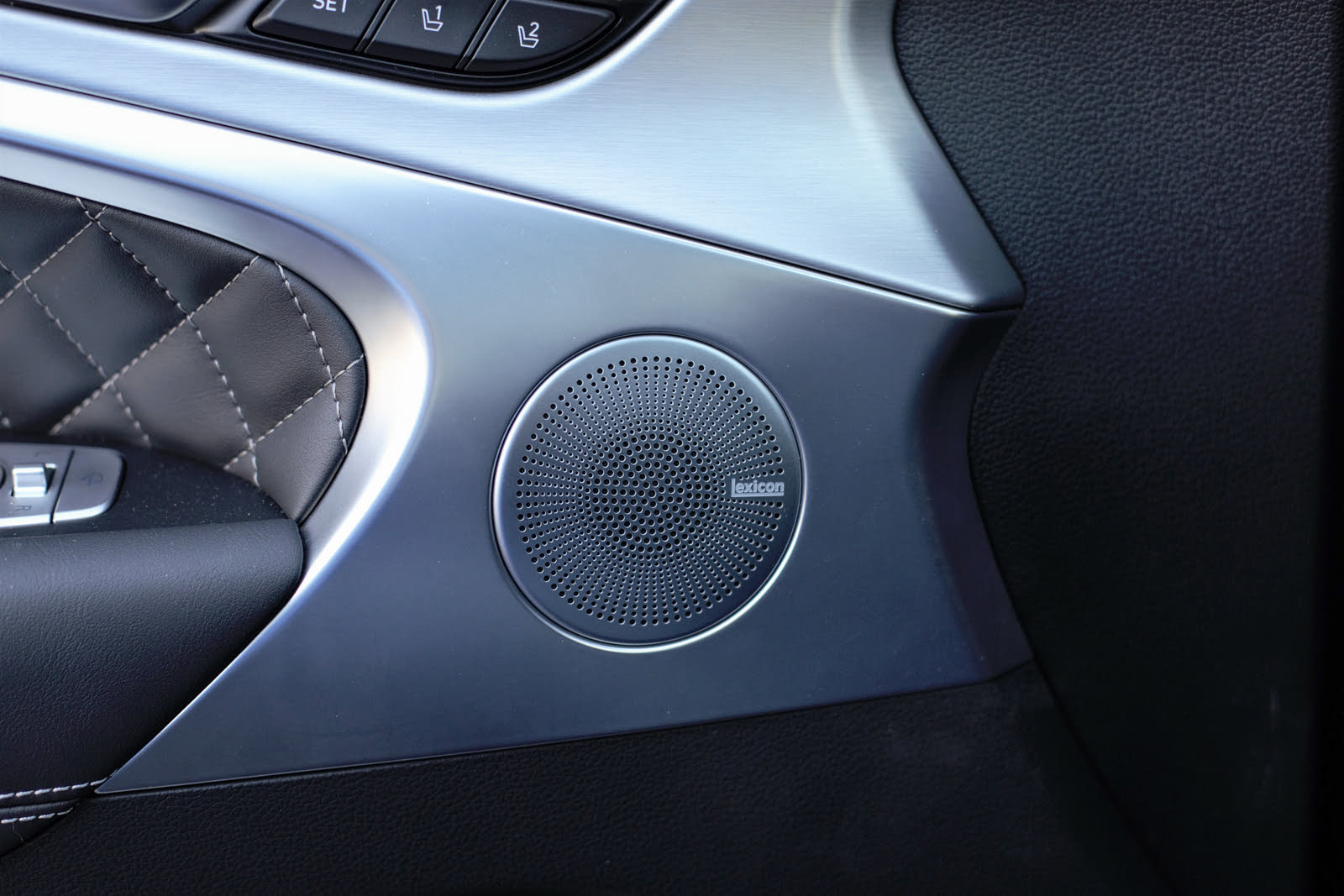 In terms of technology, the G70 comes well equipped, if a bit behind the times when it comes to software. Apple CarPlay and Android Auto come standard. The Elite trim, one step above the base Advanced, has the 15-speaker Lexicon stereo (which makes compressed SiriusXM music sound pretty good), parking sensors, heated front seats, and a power steering column. A heated steering wheel and rain-sensing wipers are on the Prestige. New for 2020 on the top Sport trim is a power closing trunk lid.

What's lacking is a thoughtful and reskinned interface for the infotainment and instrument panel screens. They're straight out of older, low-cost Hyundai and Kia models and not at all like the sweeping, fully redesigned widescreen system in newer sedans like the 2020 Hyundai Sonata. This is often the case with car models that a company introduces in between software updates, and it's frustrating here on a luxury model that commands top dollar. But like we said, most everything works well. 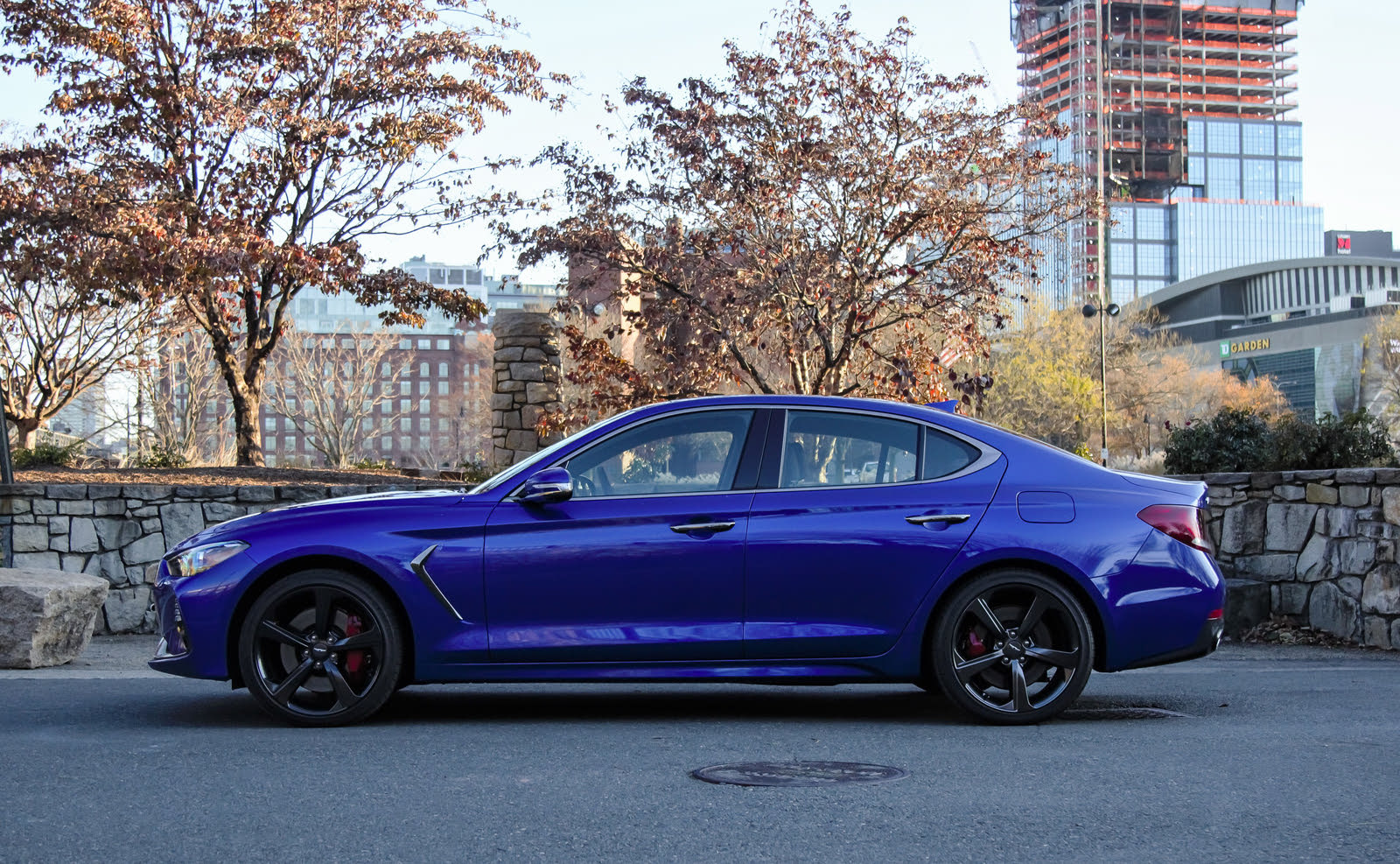 Seemingly every driver-assist technology and safety feature available comes standard on the G70, including adaptive cruise control and a lane-keeping function that together work as a semi-automated system on marked highways. Navigation is optional and comes with fast voice recognition, the usual live traffic data, and a sharp head-up display.

The 2020 G70 has not been rated by the National Highway Traffic Safety Administration (NHTSA). It is a Top Safety Pick+ by the Insurance Institute for Highway Safety (IIHS), for scoring the best ratings in six crash tests, headlights, and for its standard forward emergency braking. Pedestrian detection, blind-spot monitoring, auto high beams, and a driver attention monitor also come standard. A driver's knee airbag is included. 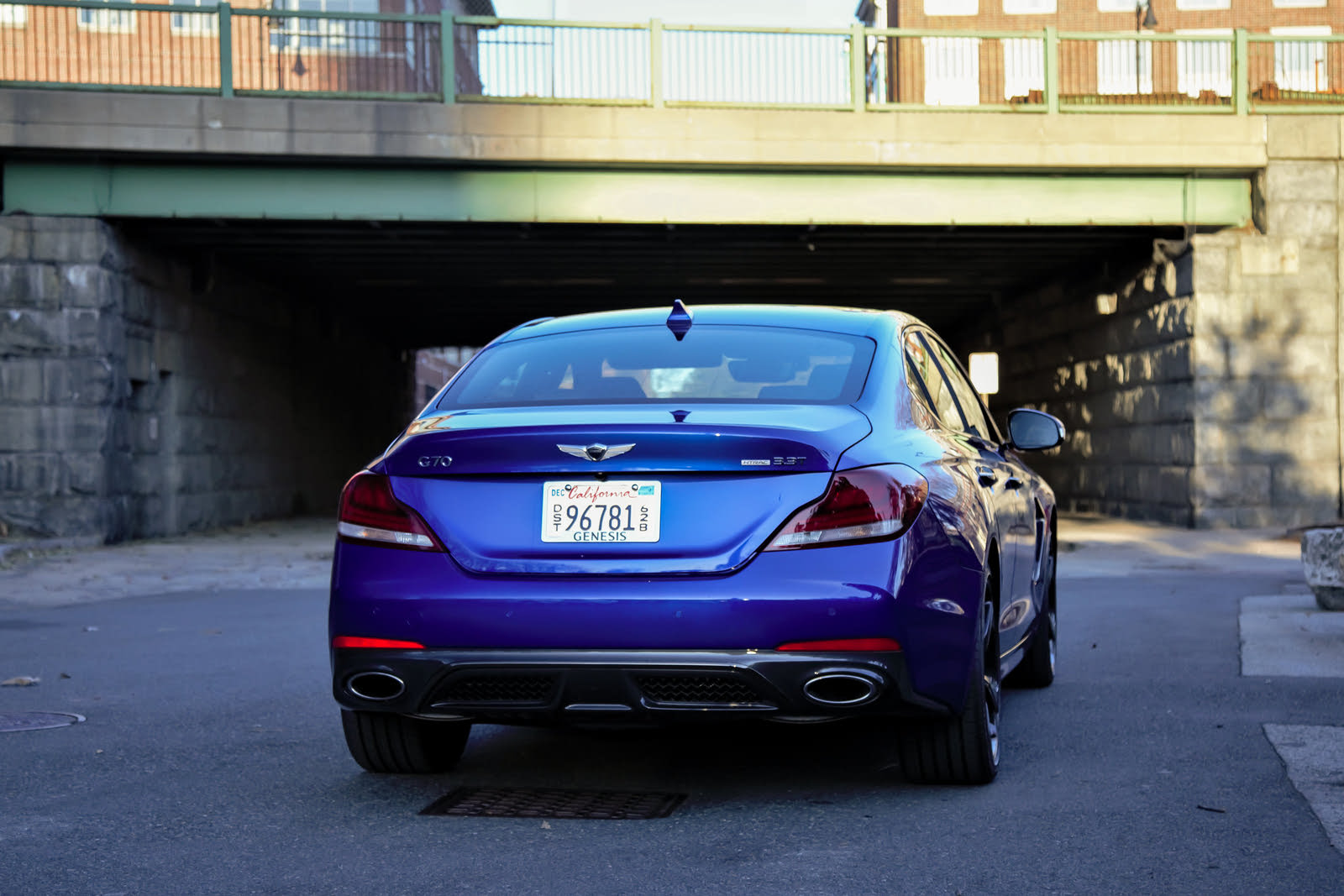 At $35,450 to start, the 2020 G70 isn't a superior value until it's fully loaded like our test car, a Genesis G70 3.3T Sport AWD, at $52,250. Here, loaded with tech, high-end interior furnishings, a potent engine, and large wheels, Genesis delivers a genuine luxury car and a true sport sedan at thousands, if not $10,000 or more, less than a comparable BMW, Mercedes-Benz, or Audi. Consider an Alfa Romeo Giulia Ti Sport with similar equipment is the same price as our tester, and it comes with a turbo-four!

That it doesn't have all the latest digital tech on the dash isn't the biggest concern. The dynamics, the feel, the style, these elements are what makes any G70—especially with the big V6—feel like a premium, well-oiled machine that will reward its driver for years to come. And some of those years are guaranteed well past what the competition offers: A five-year/60,000-mile warranty, 10-year/100,000-mile powertrain warranty, and three-year/36,000-mile included maintenance with pickup/dropoff service and loaners, without setting foot in the dealership. The only problem? We wish we could have kept this test car for good.