Looking for a Used Mustang Shelby GT500 in your area?

In the new 2020 Mustang Shelby GT500, Ford builds the most powerful street-legal car in its history. We go to Las Vegas Motor Speedway to test its mettle on the drag strip and the track. 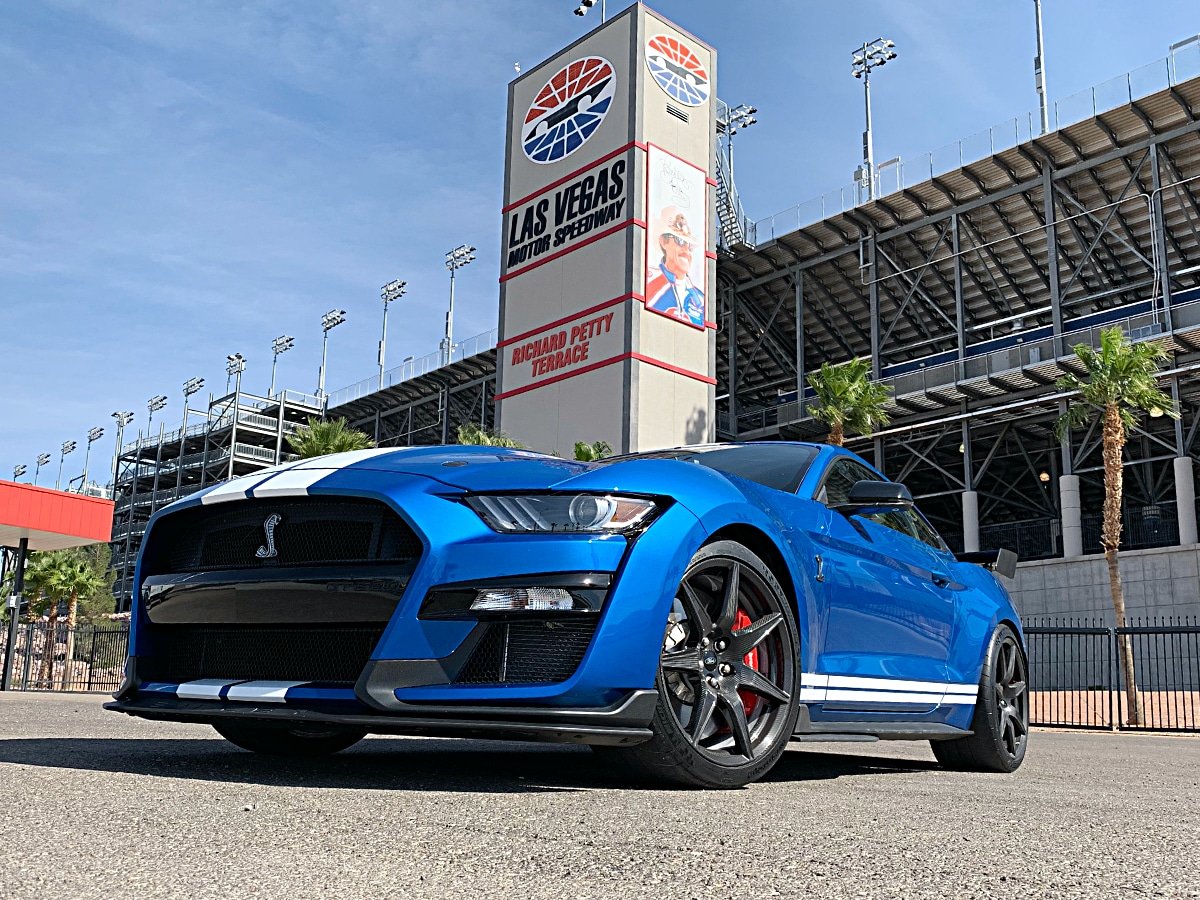 Chevrolet, Dodge, and Ford wage continuous battles for supremacy in order to win the hearts and minds of American consumers. Mainly, the war’s busiest front lines are in the pickup truck, SUV, and performance car segments. With the new 2020 Ford Mustang Shelby GT500, Dearborn finally has a legit combatant to take on the Camaro ZL1 and Challenger Hellcat. But it doesn’t come cheaply. 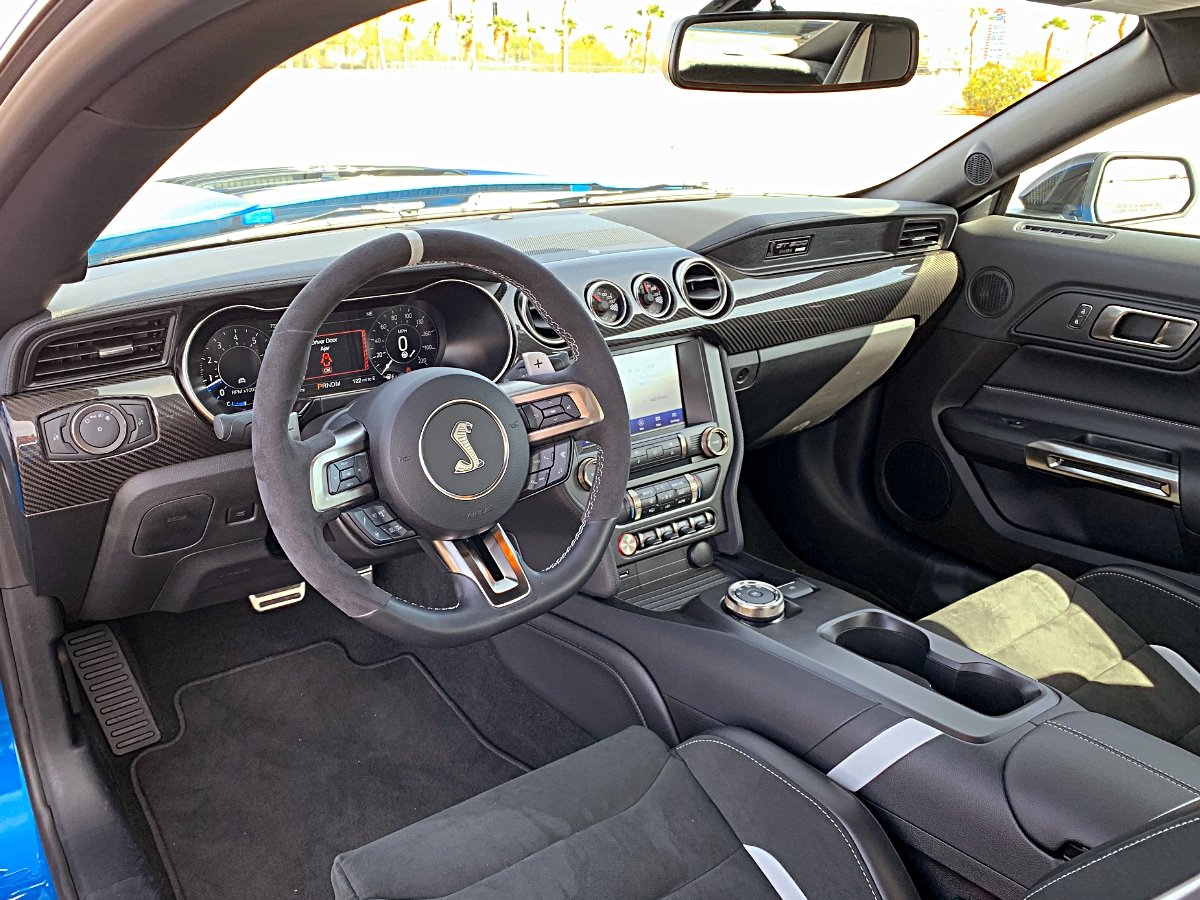 Until now, the Shelby GT350 (and its track-tuned GT350R variant) was Ford’s most formidable Mustang. Priced beneath the most powerful versions of the Camaro and Challenger, the Shelby GT350 was the more sophisticated member of the trio, less about outright oomph and more about driving dynamics that can rival cars twice its price.

Compared to the Shelby GT350, the new Shelby GT500 gets a reworked front end designed to maximize both downforce at speed and system cooling. A massive louvered hood vent also contributes on these fronts, along with a new standard rear spoiler and rear diffuser panel.

Dressed up with optional white vinyl racing stripes and carbon-fiber adjustable racing wing from the Mustang GT4, and the carbon-fiber wheels that come in the pricey Carbon Fiber Track Package ($18,500), our Kona Blue test car looked terrific. But it was just begging for a speeding ticket.

Inside, the Shelby GT500 isn’t much different from other Mustangs. The meaty steering wheel with a silver centering mark and partial Alcantara suede trim is delightful to hold. A plaque on the dashboard reminds occupants of this Mustang’s exclusivity, and the center console is revised to accommodate the GT500’s unique transmission. As part of its expensive option package, the test car had both Recaro performance seats and exposed carbon fiber on the dashboard.

Instrumentation is excellent and easy to reference at a glance. The shiny controls, however, suffer glare in sunlight and are clearly more about form than they are function. Quality is a mixed bag of high-end add-ons contrasting sharply with base Mustang rental car plastics. It's critical to remember that you’re paying for performance, not luxury. 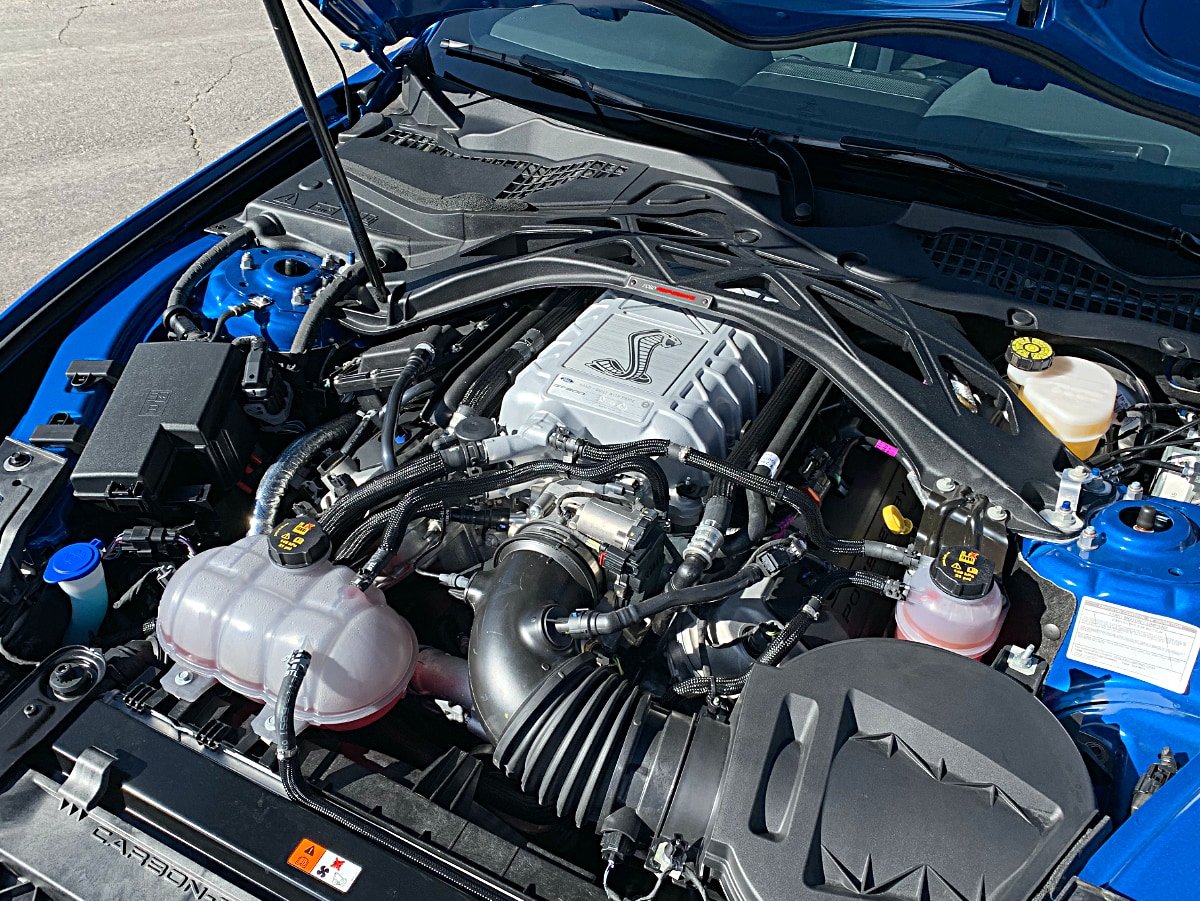 Considering the full engineering upgrade bestowed upon the Shelby GT500, the ask is a relative bargain compared to the Shelby GT350.

The star of the show is a hand-assembled 5.2-liter V8 engine with a 2.65-liter supercharger snugged between the cylinder banks. Output measures 760 hp at 7,300 rpm and 625 lb-ft of torque at 5,000 rpm, and the only transmission is a new 7-speed dual-clutch automated manual transmission (DCT). The DCT offers fully automatic, semi-automatic, and fully manual modes, and paddle shifters provide control over gear changes. A carbon-fiber driveshaft puts the power to the rear wheels through a limited-slip differential.

The end result, according to Ford, is acceleration to 60 mph in 3.3 seconds, a quarter-mile trap time of 10.7 seconds, an electronically limited top speed of 180 mph, and fuel economy ratings of 12 mpg in the city and 18 mpg on the highway.

To demonstrate the Shelby GT500’s character as a daily driver, a road-tripper, a drag-stripper, and a track rat, Ford invited me to Las Vegas Motor Speedway for a day of driving. With a good-natured warning that local police knew to be on the lookout for a swarm of Shelbys, the automaker handed over the key fob and sent me across suburban Vegas and into the local mountains.

With the car’s various settings and modes set to the equivalent of “chill,” I spent a morning driving public roads and sticking relatively close to the posted speed limit. In doing so, I averaged 14.8 mpg and realized several things about the GT500.

This is an easy car to drive in traffic. Thanks to the DCT and adaptive damping suspension, the Shelby is as docile as a Mustang GT when you can’t go fast. While purists may lament the lack of a manual transmission, its omission doesn’t bother me one bit.

This is a loud car, even with the active exhaust system in its normal setting. Certainly, it did not help that the test vehicle was missing its rear seat, turning the back half of the cabin into a booming echo chamber. Nevertheless, you’ll want to plan to yell when speaking to a passenger.

This is an uncomfortable car when equipped with the Recaro performance seats, which have hard, unyielding bolsters that are unfriendly to wider folks like me.

Back at Las Vegas Motor Speedway for the afternoon, the Mustang Shelby GT500 is more at home on both the drag strip and the track. Thanks to its Line Lock tire warming technology, which transforms the car’s pricey rubber into billowing clouds of acrid smoke, and to its Launch Control system, I managed a quarter-mile time of 11.189 seconds and 130.23 mph.

Those numbers accompanied my third run down the drag strip. As in, my third run down any drag strip, ever. Sure, I was half a second off Ford’s claimed quarter-mile time, but when a car makes a novice like me that fast, imagine what it can do for someone with experience.

The testing day wrapped up with a 10-minute session on a closed road course, where this Mustang proved it’s not a one-trick pony. On the corners, kinks, rises, and dips of a track, the Shelby GT500 parts company with its straight-line muscle car past and matches the heavy artillery most commonly emerging from Germany.

Learning a course and gaining absolute trust in a car within such a short span of time isn’t possible, but the Shelby GT500’s sheer capability and relatively forgiving nature make it easier.

This snake can bite, though, as I discovered when I applied too much throttle too early while exiting a corner. The stability control caught the slide early, and with more time in the saddle and on the track, I’d no doubt come to love this tail-happiness. But at that moment, I was glad to have the safety net. 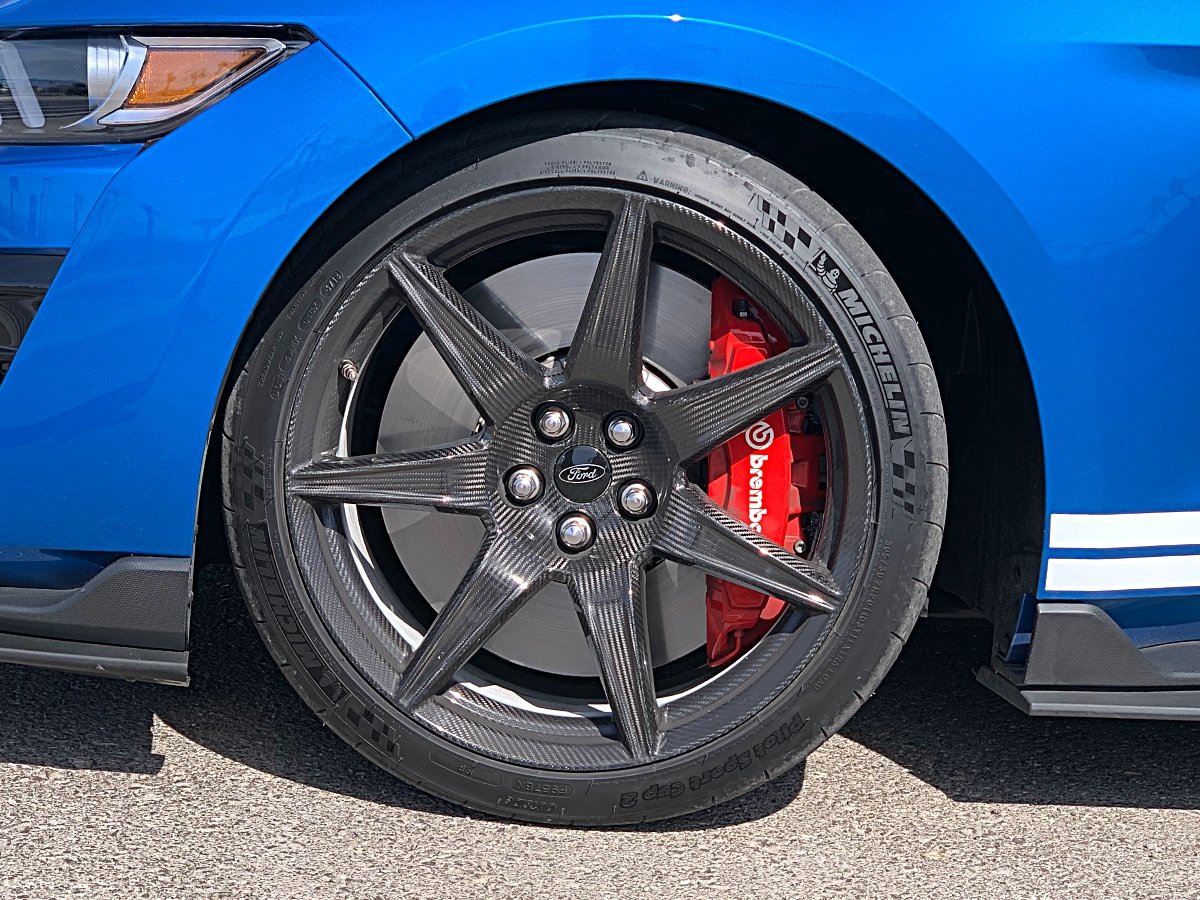 Though the Shelby GT500’s mission is outright performance, it functions just as well as any other Mustang in terms of comfort, features, and utility.

Standard 6-way power-adjustable sport seats are wrapped in leather and Miko suede, facing a dashboard equipped with dual-zone automatic climate control. The optional Recaro performance seats include pass-throughs for 5-point racing harnesses, and racing is when they’re at their best. Otherwise, the snug and hard bolsters can be torturous.

As is true of all Mustangs, the Shelby GT500’s back seat is useful only for shorter adults or children, and even then the driver and front passenger must move their seats forward to accommodate them. The Carbon Fiber Track Package deletes the back seat to reduce weight, but this also amplifies road, wind, and exhaust noise.

Interior storage space is nearly non-existent. The cupholders are the most accommodating location for things unless you use the glove compartment. Trunk space is sizable for a car like the Shelby GT500, measuring 13.5 cubic feet. And don’t forget that you can always toss extra things into the backseat since you’re unlikely to have rear passengers along for the ride. 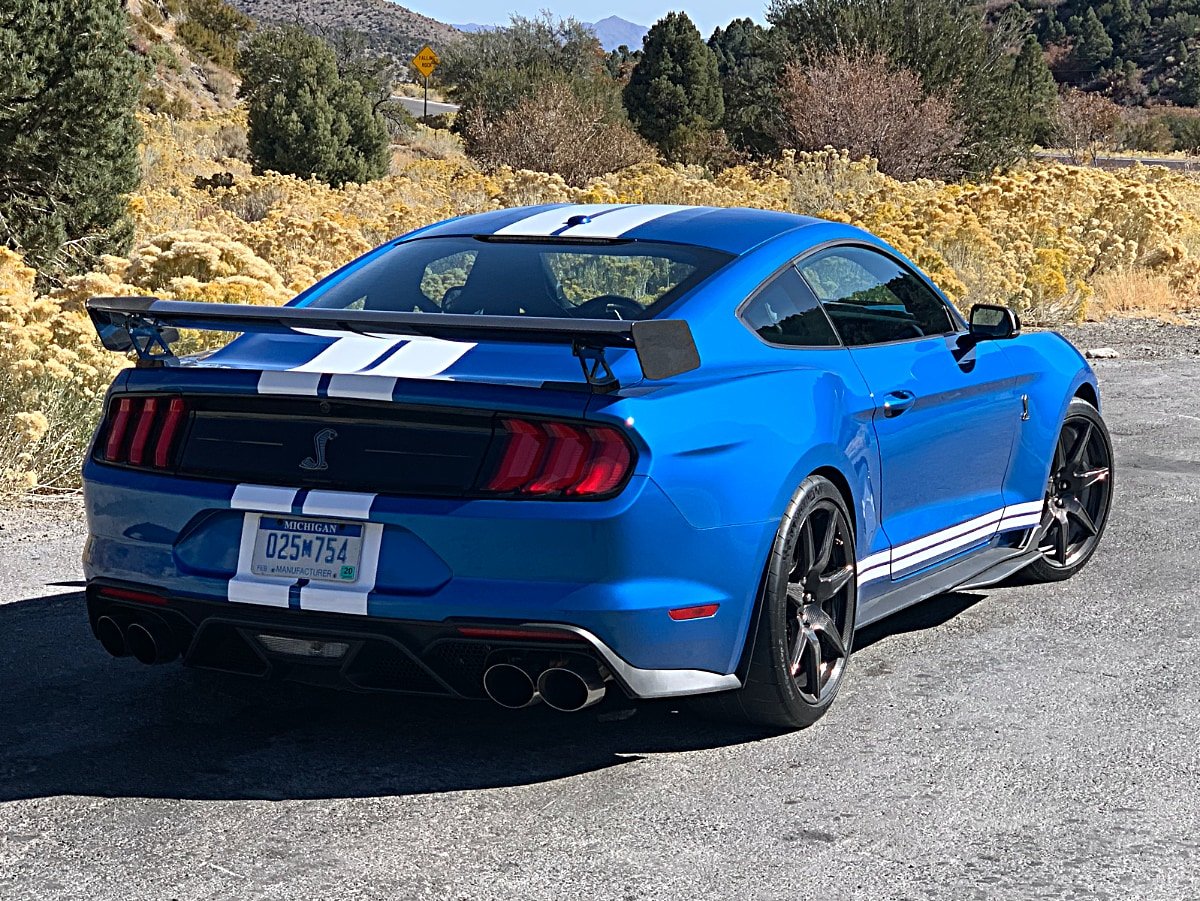 From an engineering standpoint, the Mustang Shelby GT500 is undeniably high-tech. Otherwise, with just a few exceptions, the rest of the car is about getting back to basics.

Digital instrumentation is standard, rendered on a 12-inch display through themes that correspond to the selected driving mode. For example, in Normal mode, it mimics classic round analog instrumentation. In Track mode, an oversized ribbon of a tachometer and a big digital speedometer dominate the display.

A Technology Package adds a navigation system and a 12-speaker B&O Play premium sound system to the car. The latter is useful for overcoming the excessive noise in the cabin, while the former took me on an unexpectedly circuitous route back to the racetrack. 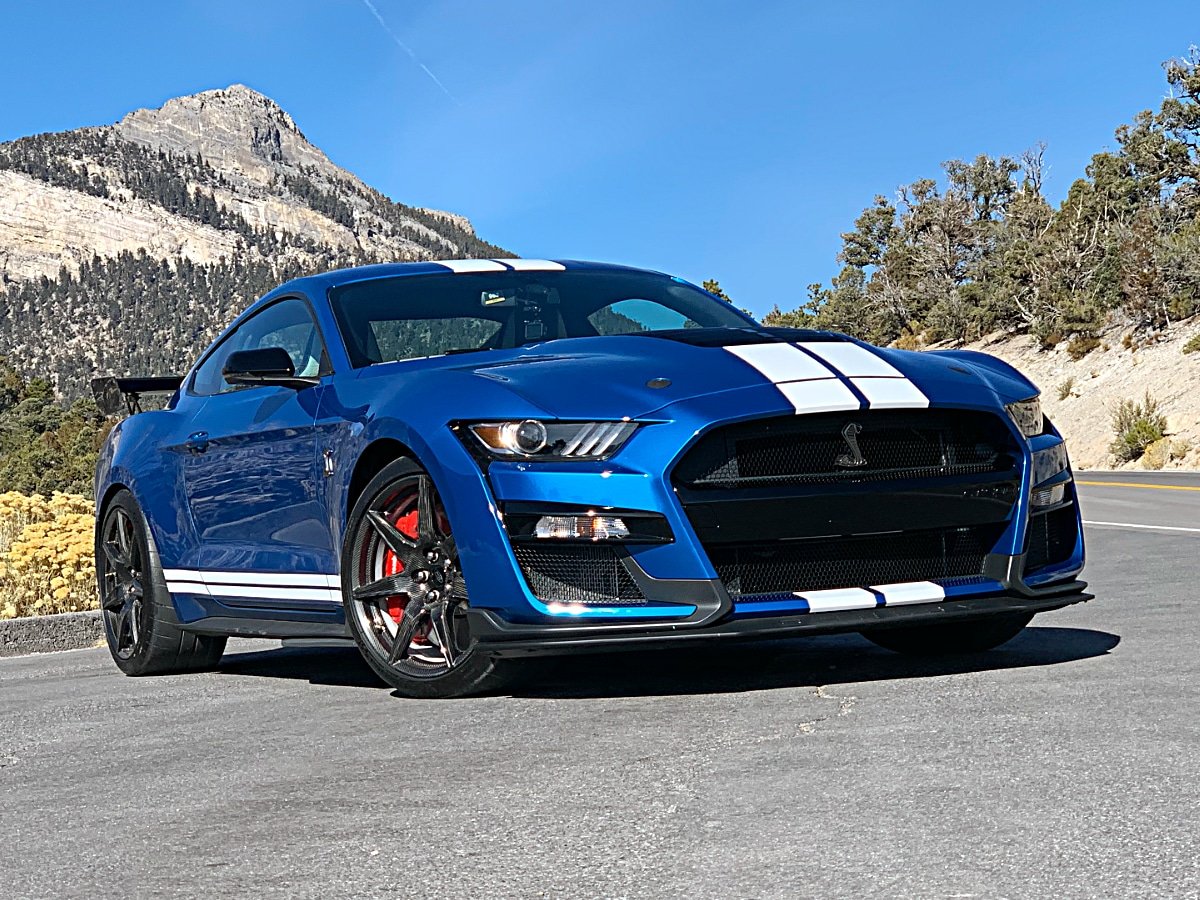 The internet is full of viral videos featuring Mustang drivers showing off and losing control, which is why it’s important to keep the traction and stability control systems turned on when driving on public roads. Additionally, the Shelby GT500 is equipped with a standard reversing camera and a blind-spot driver’s side mirror, which provides a small convex portion that helps you to see in the car’s left blind spot.

A blind-spot monitoring system and rear cross-traffic alert are included in the Technology Package, but you won’t find any other driving assistance systems in this car. Given the Shelby GT500’s mission, that makes sense. After all, this car is all about maximizing driver enjoyment and not leaning on technology to save you when you’re not paying attention.

In crash testing performed by the National Highway Traffic Safety Administration (NHTSA), the Mustang Shelby GT350R earned 5-star ratings in every single assessment, including rollover resistance. The Insurance Institute for Highway Safety (IIHS) tested the Mustang GT coupe, giving it a Good rating in most respects. In the small overlap, frontal-impact test for the driver’s side of the car, the Mustang gets an Acceptable rating. 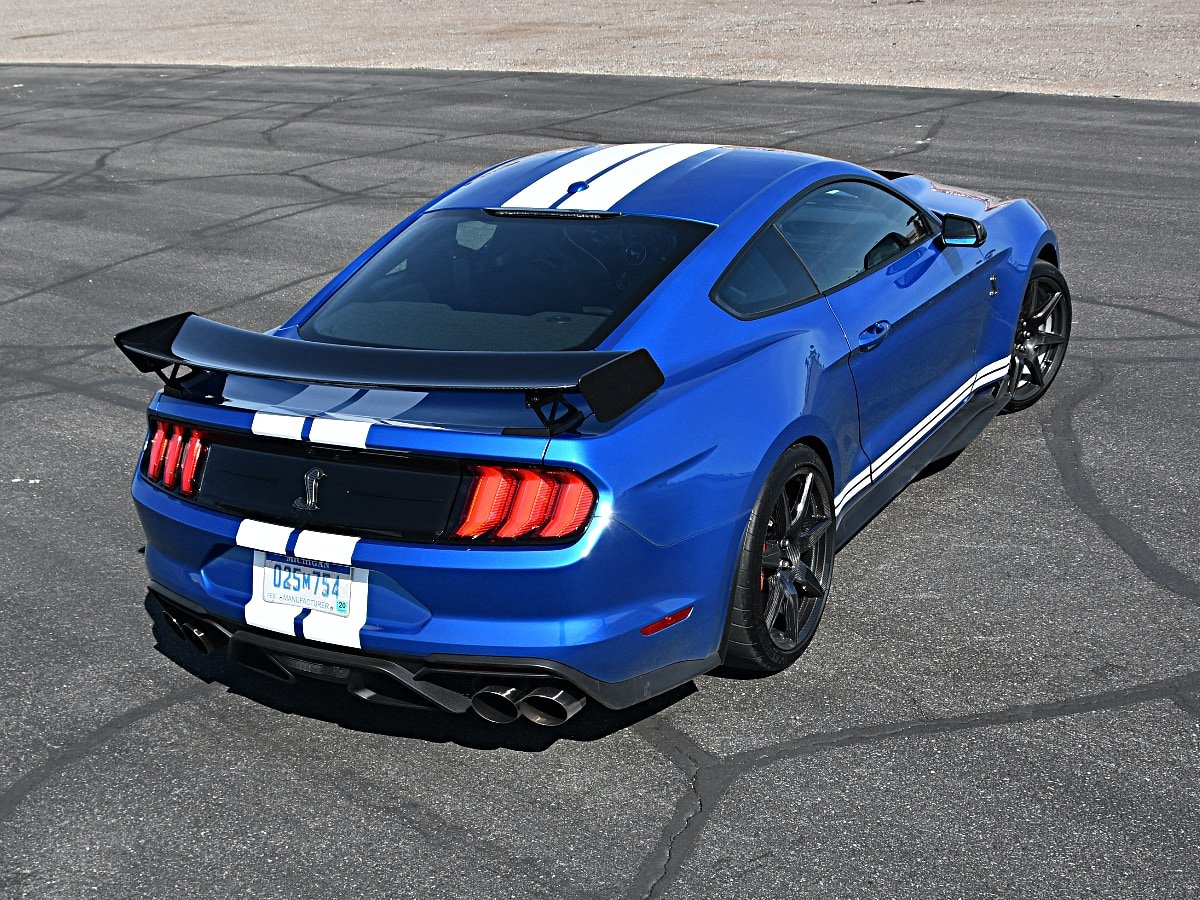 At its starting price, the 2020 Ford Mustang Shelby GT500 is more expensive than its main rivals from Chevrolet and Dodge. In fact, it costs $605 more than a Challenger Hellcat Redeye, which is even more powerful, if not as talented on the track.

Especially at its as-tested price of almost $97,000, an argument can be made that a Shelby GT500 is not a cost-effective way to obtain maximum performance. After all, a Tesla Model S Performance costs about the same, spanks the ‘Stang to 60 mph, screams through the quarter-mile in 10.5 seconds, and tops out at 163 mph. And the Tesla can comfortably carry four adults and plenty of cargo.

If you’d rather stick with gasoline, similarly-priced alternatives such as an Audi RS 5 or a Mercedes-AMG C 63 aren’t quite as fast as the Shelby GT500, but they are more sophisticated in terms of quality, comfort, materials, and pedigree. And the Audi has all-wheel drive, making it agreeable to drive in foul weather.

Clearly, there are ways to feed your need for speed that do not require the purchase of a Shelby GT500. But if you want to own the most powerful street-legal Ford in history (so far), nothing else will do.

Henry I love it! Everyone around me makes nonverbal comments with their Hellcats and Cameros. I ROLE UP in this...enough said! Lol

GuruVL12Y I really admire this; car more over the Nissan GTR and the 2020 Porsche 718 Spyder. This, Shelby 500 has a ton of more options/ Safety features for alot better HP and much better pricing then the competitors. I'm getting the 2020 Shelby 500 for sure when i turn 45.

Looking for a Used Mustang Shelby GT500 in your area?

WHY WAS I CHARGED TWICE TO UPGRADE MY ACCOUNT