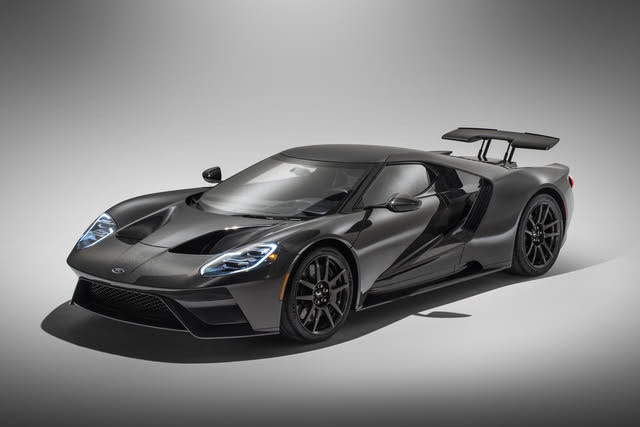 Ford began production of the latest Ford GT at the end of 2016 and will continue building the car at its factory in Ontario until 2022. Total production across those six years should be fewer than 1,500 GTs. To keep things interesting Ford has updated the GT for 2020 with more power and a new special edition. A new “Liquid Carbon” option leaves the GT’s carbon-fiber body shell fully exposed and comes with standard carbon wheels, while a restyled Heritage Edition adds a black pinstripe to divide the blue and orange colors that harken back to the old Gulf Oil–sponsored GT40 race cars from the 1960s. Carbon wheels are also available with the heritage livery for the first time in 2020. In total, the 2020 Ford GT is available in seven different colors.

More important than the paint, though, is the power. Sitting behind the driver in the GT is a 3.5-liter twin-turbo EcoBoost V6 coupled to a Getrag 7-speed dual-clutch automatic. For 2020, it makes 660 horsepower, or 13 more than the 2017-19 cars do, and Ford claims the engine now has a broader torque curve. Among the upgrades to achieve that figure are revised engine cooling and airflow as well as larger intercoolers. Ford also added standard titanium exhaust for 2020, which should enhance the noise it makes, although to Ford GT fans of old, anything but a good, old-fashioned V8 just doesn’t sound right.

Ford shaped the GT’s bodywork with the latest in aerodynamics in mind but also wanted to keep certain styling cues, so people can still see its relation to the older cars. The family resemblance is most noticeable in front, while the teardrop-shaped rear with active rear spoiler is a more serious departure from previous GTs. Under the carbon-fiber skin are a carbon-fiber monocoque chassis bolted to aluminum front and rear subframes. The windshield is made of Gorilla Glass to keep weight down, and the suspension is a pushrod system that locates many of the components inboard. This allows more space for the body’s aerodynamic elements. The brakes use carbon-ceramic rotors from Brembo with six pistons up front and four in back. Wheels are either forged aluminum or carbon fiber.

The interior of the Ford GT isn’t bare-bones, but it is driver-oriented, with little clutter on the dash. It has heavily bolstered carbon-framed Sparco seats, a suede-wrapped steering wheel with a flat bottom and flat top, and a digital instrument display. As for safety, the Ford GT is too expensive for crash testing and the GT comes only with those safety features mandated by law.

The Ford GT was already one of the quickest and most exclusive cars on the road, and the latest 2020 model promises to be even quicker. It is also likely to be highly collectible in the future as well, just like the 2005-06 Ford GT.

Users ranked 2020 Ford GT against other cars which they drove/owned. Each ranking was based on 9 categories. Here is the summary of top rankings.

How much will the price of the 2020 Mustang GT be estimated at in two years?