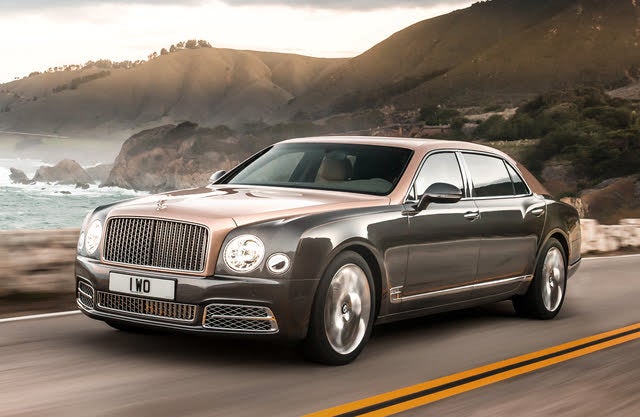 Named after a section of the track at Le Mans, the Bentley Mulsanne was originally a full-size performance sedan built from 1980 until 1992, but Bentley resurrected the model for 2010 as its flagship model. The current Mulsanne got a refresh in 2017 and will cease production in the near future, so there aren’t any major changes for 2020, although there is a limited-production “6.75 Edition” by Mulliner that bids farewell to the Bentley L-Series V8 that has powered Bentleys for decades. Just 30 examples of the 6.75 Edition will be built, distinguished by styling changes such as special stitching, extra chrome badging, and cutaway illustrations of the engine laid onto the gauge faces.

The aforementioned L-Series engine may be an old design, but there’s nothing antiquated about its performance. In the Mulsanne, the twin-turbo 6.75-liter unit makes 512 horsepower and 752 pound-feet of torque. And even though the Mulsanne is a hefty thing at over 5,800 pounds, the engine puts out enough power to get the car to 184 miles per hour. An available “Speed” model also turns things up a notch with 537 hp and 811 lb-ft of torque as well as a 190-mph top speed. The Mulsanne comes with rear-wheel drive (RWD) and an 8-speed automatic transmission.

The Mulsanne also reportedly feels light on its feet for such a big car, and its air suspension has customizable settings for different situations and conditions. As one might expect, though, a large-displacement V8 saddled with two turbos and nearly three tons of hand-built English luxury also comes with dismal fuel-economy figures. The EPA rates the Mulsanne at just 12 mpg combined.

In addition to the prestige that comes with that big square grille and Flying B hood ornament, the Mulsanne justifies its monumental price tag on the inside. Ample leather and premium trim cover most surfaces, and Bentley offers enough choices of color schemes and veneers that few Mulsannes are likely to look exactly alike. All are roomy and luxurious, but noteworthy options include a 20-speaker stereo and dual 10.4-inch backseat entertainment screens that passengers can also pull out and use as tablets. The rear bench seat can also be swapped for rear buckets, and an extended-wheelbase model stretches the car by almost 10 inches, largely to the benefit of the folks sitting in the back.

The Mulsanne hasn’t gone through crash testing and is far too expensive to ever do so, but blind-spot monitoring and forward-collision warning with automatic emergency braking are standard, and adaptive cruise control is optional. After the Mulsanne bows out at the end of 2020, the third-generation Flying Spur introduced last year will take over as Bentley’s flagship sedan.

What's your take on the 2020 Bentley Mulsanne?

Have you driven a 2020 Bentley Mulsanne?
Rank This Car

Where Best To Fix Your Credit ?

Ace Cyber Group is truly the game changer!!!. I was looking to refinance my vehicle but then I didn’t have a good credit. I learned about ACECYBERGROUP@GMAIL.COM on a credit blog and decided to talk...