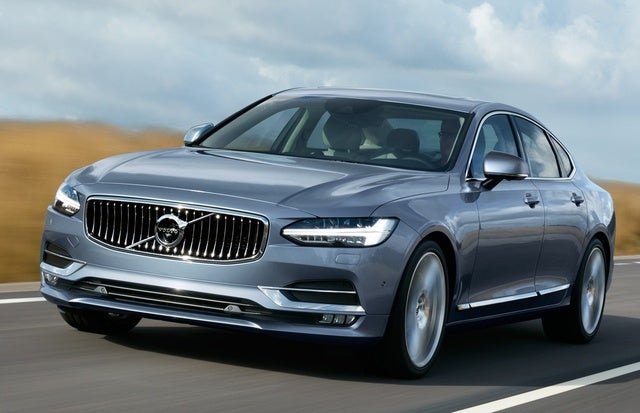 Looking for a Used S90 in your area?

Volvo’s flagship “90” series of vehicles includes an SUV, wagon, and its nicest sedan, the S90. When introduced, the model came in two forms. The shorter version of the S90 straddled the line between midsize and full-size sedan. The longer model offered an extended wheelbase, which provided limousine-like accommodations. But in 2018, Volvo quietly discontinued the shorter model, making the S90 full-size. Bearing that change in mind, it’s not surprising to find that Volvo has carried over the S90 for 2019.

The S90 cuts a handsome figure. The front end distills modern and classic sensibilities into a design that’s recognizable across the Volvo range – especially the “Thor’s Hammer” LED signatures. The midsection is clean and linear, and there’s a striking set of C-shaped taillights at the rear. The interior will delight drivers familiar with Volvo: it offers the same interfaces and basic switchgear as the rest of the brand’s cars, along with sensible Swedish luxury.

Like most of its other cars, Volvo offers the S90 with a choice of three different engines. T5 is the base setup, consisting of a 2.0-liter turbocharged inline 4-cylinder engine capable of 258 horsepower and 250 pound-feet of torque. In standard form, power is routed to the front axle via an 8-speed automatic, but all-wheel-drive (AWD) is an option. Meanwhile, T5’s fuel economy is comparable to that of cars a couple sizes smaller. With FWD, it gets 23 miles per gallon city, 35 highway and 27 combined, albeit on premium fuel.

Finally, T8 gains an electric motor for plug-in hybrid capabilities. Also putting forth V8-like numbers, 400 hp and 472 lb-ft, it gets 71 miles-per-gallon equivalent (MPGe) in hybrid mode, or 29 mpg on gasoline alone, plus 490 miles of total range. As with T6, AWD is standard.

Volvo’s continued commitment to safety means that about every safety option is standard on the S90, which includes everything from a reversing camera to reversing sensors, rear park assist, front- and rear-collision mitigation, blind-spot monitoring, cross-traffic alert, and adaptive cruise control. Only a heads-up display is optional. Thanks to the above, the S90 aced the Insurance Institute for Highway Safety (IIHS) crash tests it underwent in 2018.

With long lists of standard and optional amenities and rear seat accommodations fit for a king, the Volvo S90 continues to play counterpart to some of its garish competitors, positioning itself as the thinking person’s luxury sedan.

Looking for a Used S90 in your area?

I'm currently on the market for a new car. I finally have a career where I can get a little luxury and I'm looking at a S90 preferably a 2019 or a 2020 if I wait for the deals. The only thing holdi...