The 2019 Volvo S60 packages athleticism and beauty in a competitive small luxury sedan. 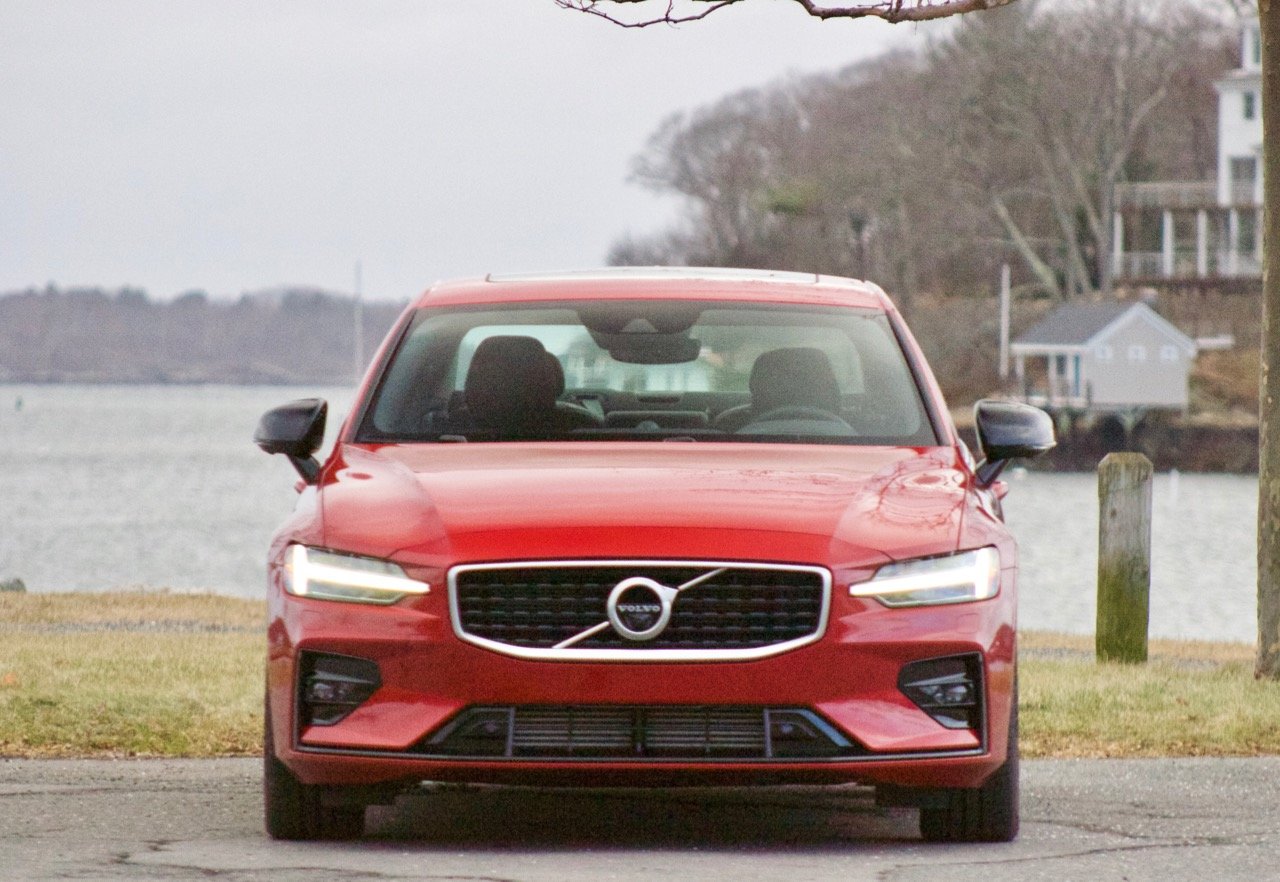 The Volvo S60 competes with the likes of the BMW 3 Series, Mercedes-Benz C-Class, Audi A4, Lexus IS, and Infiniti Q50. But the S60 wasn't always so competitive. In fact, dating back to 2000, it was kind of its own thing, the closest competitor being Saab. Well, Saab is no more, and Volvo woke up, realizing it had to make a sedan with mass appeal. From a visual standpoint, it’s hard not to find the S60 appealing. 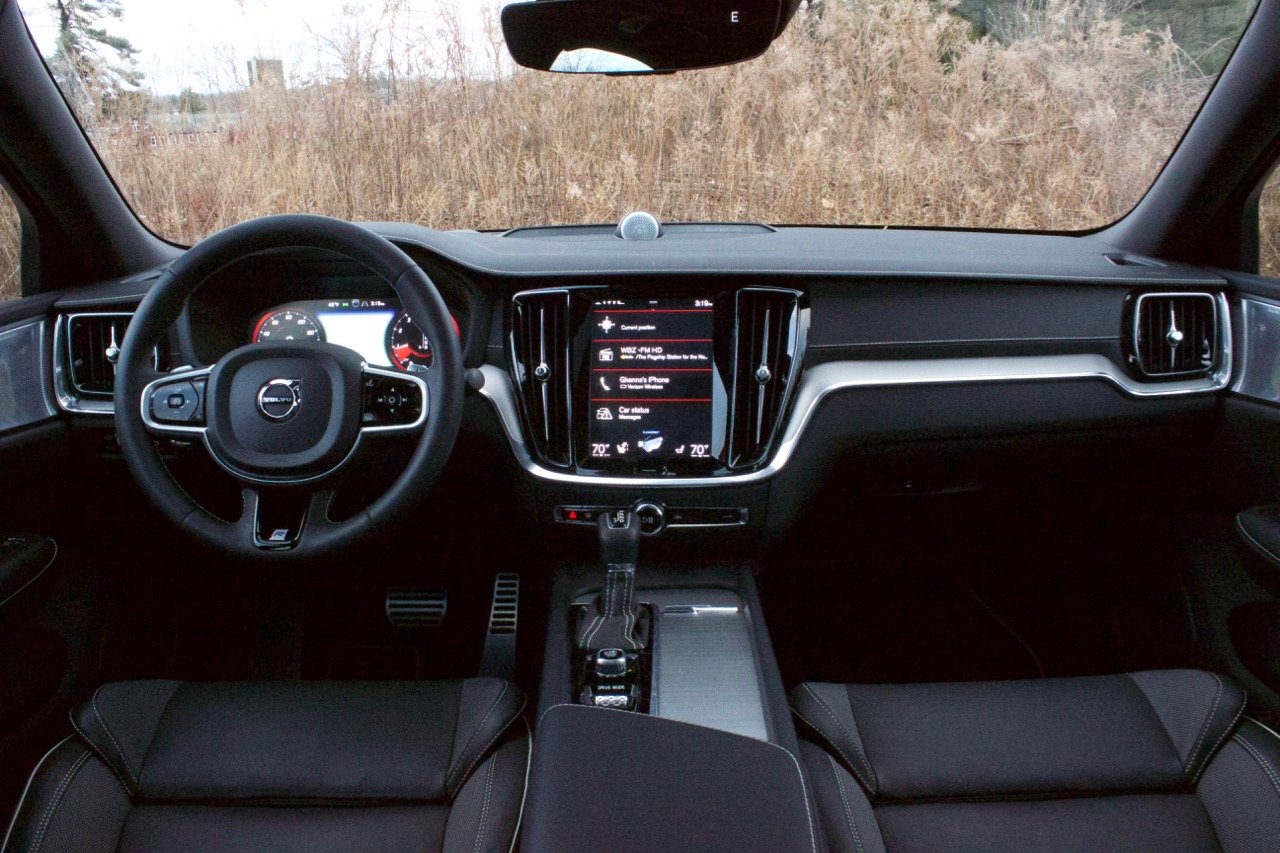 It’s funny, Volvo has managed to completely change its image from quirky to sexy over the past decade. With the S60, the flagship Volvo S90 sedan’s design has been scaled down to fit a small luxury platform that competes with cars like the BMW 3 Series and Audi A4. This results in a bit more flair than you’ll find in the S90. Outside, the straight lines and precise angles are still there, but the S60’s rear fender and C-pillar combine to give it an athletic stance.

You don’t need a degree in art history to see the beauty in the new Volvo S60. It might not put function first, but the design is so good, you'll want to investigate it more.

Trims for the 2019 Volvo S60 are Momentum, R-Design, which is what we drove, and the range-topping Inscription. The entry-level Momentum trim comes with a panoramic moonroof, heated wiper-fluid nozzles, dual-zone climate control, a 60/40-split rear bench seat, a power driver’s seat with memory settings, a power front passenger seat, and a leather-wrapped steering wheel. It also comes standard with an impressive list of driver-assistance features and the Sensus infotainment system, with standard Apple CarPlay and Android Auto.

The range-topping Inscription adds genuine leather upholstery, 4-zone climate control, and the contents of the Advance Package (optional on the R-Design and Momentum). The Advance Package adds active bending headlights, a 360-degree camera, a head-up display, and the Pilot Assist semi-autonomous driving system. 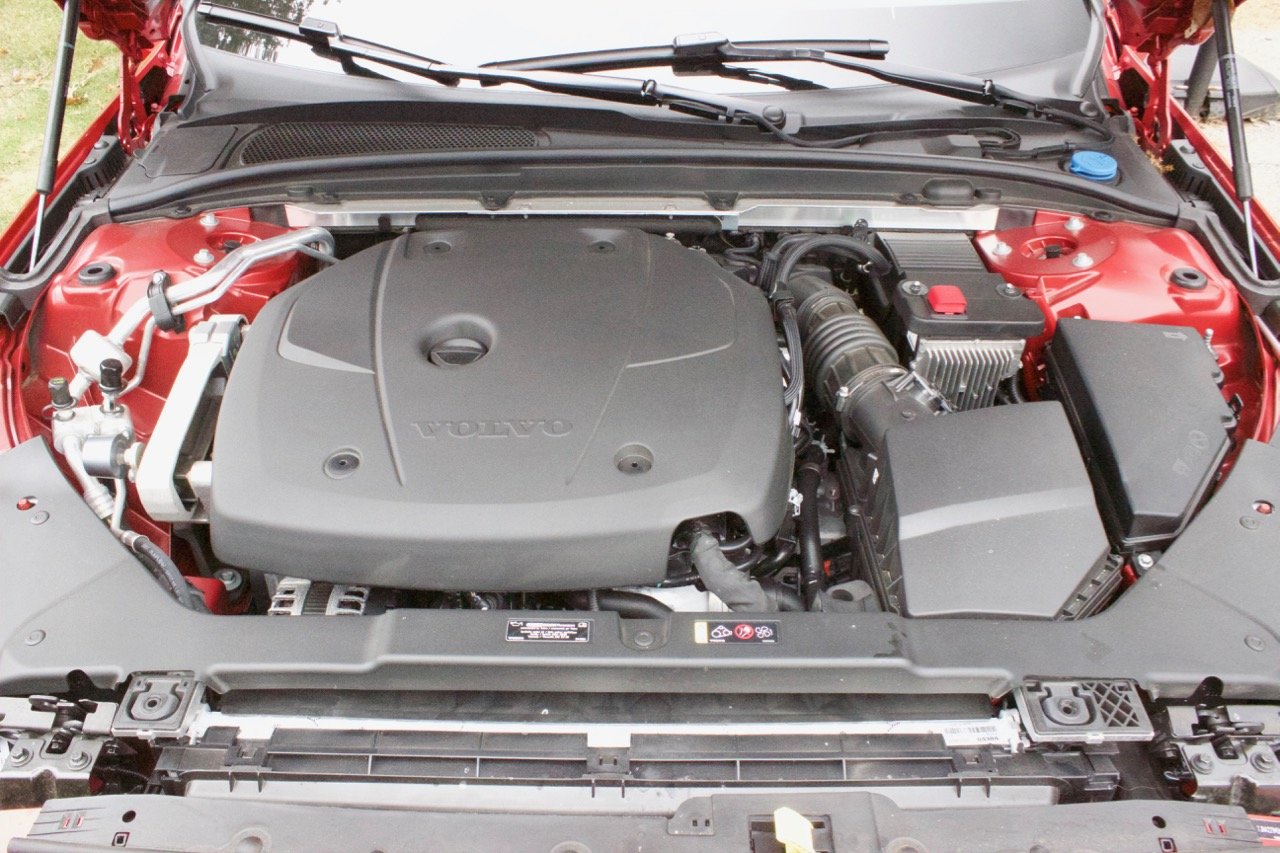 For powertrain options, Volvo uses T5, T6, and T8 designations. The T5 is the base engine: a turbocharged 2-liter 4-cylinder engine making 250 horsepower and 258 pound-feet of torque, sent to front-wheel drive (FWD).

We drove the T6, which also features a 2-liter, 4-cylinder engine, but it’s turbocharged and supercharged, or “twin-charged.” This setup makes 316 hp and 295 lb-ft, sent to all-wheel drive (AWD).

The range-topping T8 is a plug-in hybrid. It uses the twin-charged engine of the T6 to power the front wheels and electric power at the rear. The result is a hybrid AWD layout. The system makes 400 net hp and 495 lb-ft of torque. It can even operate in full-electric mode at speeds up to 31 mph, and it has a 21-mile all-electric range. Be it the T5, T6, or T8, power is routed through an 8-speed automatic transmission.

While the T8 makes the most power, the T6 we drove still provides plenty of acceleration. Too often, Comfort or Normal mode in other cars is designed for optimal efficiency, and you really have to floor it to get the transmission to drop down into a pickup gear. But in the S60 T6, throttle and transmission responses are instantaneous.

Despite being based on an FWD layout, the S60 feels like a firmly planted rear-wheel-drive (RWD) sedan. It stays flat through corners, and it's even available with a performance suspension setup for an extra $200—well worth it.

Volvos sometimes have a stiffness to them, be it from the thickness of the doors, the thickness of the steering wheel in your hands, or the tactile feel of the indicator stalk. In the past, I’ve found this stiffness to be a bit awkward, but in a sportier car like an R-Design, it practically calls for you to push back against it. I’ve polled some past owners, and they say that’s part of the “Volvo charm.” Whatever the reason, it makes me want to drive this car just a bit harder.

The T6 with its AWD is estimated to return 21 miles per gallon city, 32 highway, 25 combined. In a week of combined city and highway driving, I found fuel economy of 23.2 mpg. It should be noted, though, I often had it in Dynamic mode and did a bit more city driving than highway.

With the T5, fuel economy is estimated at 24 mpg city, 36 highway, 28 combined. As for the T8 and its plug-in hybrid setup? No word on its overall fuel economy yet. 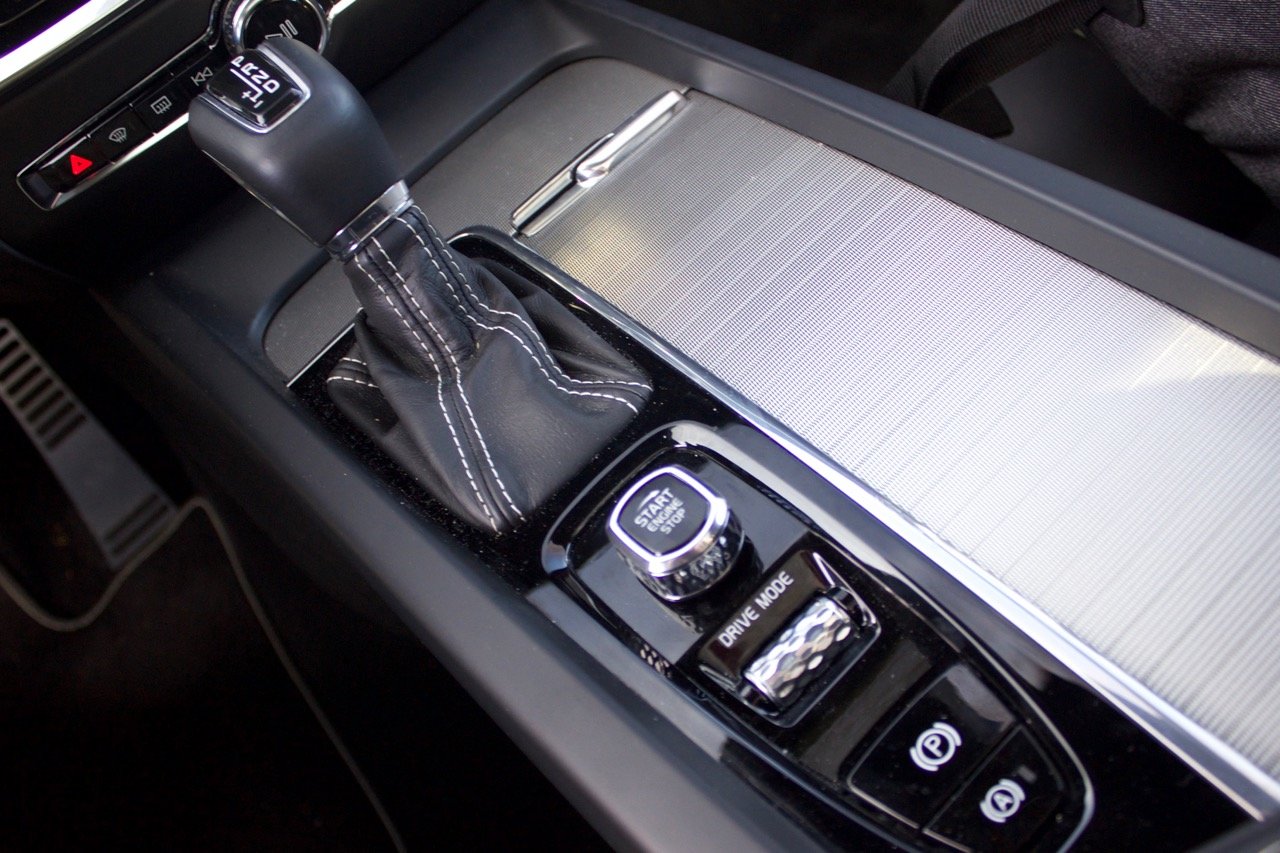 Volvo has clearly taken a form-over-function approach with its interior aesthetic. That’s not to say functionality has been thrown out the window. Steering-wheel-mounted controls are sensible enough, and the S60 offers plenty of cubby and compartment space. But I don’t love the choices Volvo made for many of the S60’s physical controls. The starter’s location (down between the front seats) and weird turn-away action are awkward. If you have long arms, you have to almost “T-Rex Arm” to use it.

Even harder to reach is the drive-mode selector, which is a weird little roller you have to roll and depress to use. The roll function allows you to use your thumb rather than squeezing your whole hand down there, but it’s still awkward.

Luckily, Volvo made one crucial choice: It went with a conventional shifter. Just a simple lever with a trigger button and your typical P-R-N-D layout. That’s more of a revelation than you might imagine. In the modern luxury market, every automaker has its own proprietary shifter design, and Volvo’s old one was one of the worst. Using the more familiar shifter design in the S60 was a smart choice for Volvo.

Backseat space is pretty decent in the S60. It’s not super roomy, but considering the competition in this segment includes the cramped Lexus IS, the rear seats in the S60 are comparatively pretty spacious. And the S60's 11.6 cubic feet of cargo space is about average for the class. 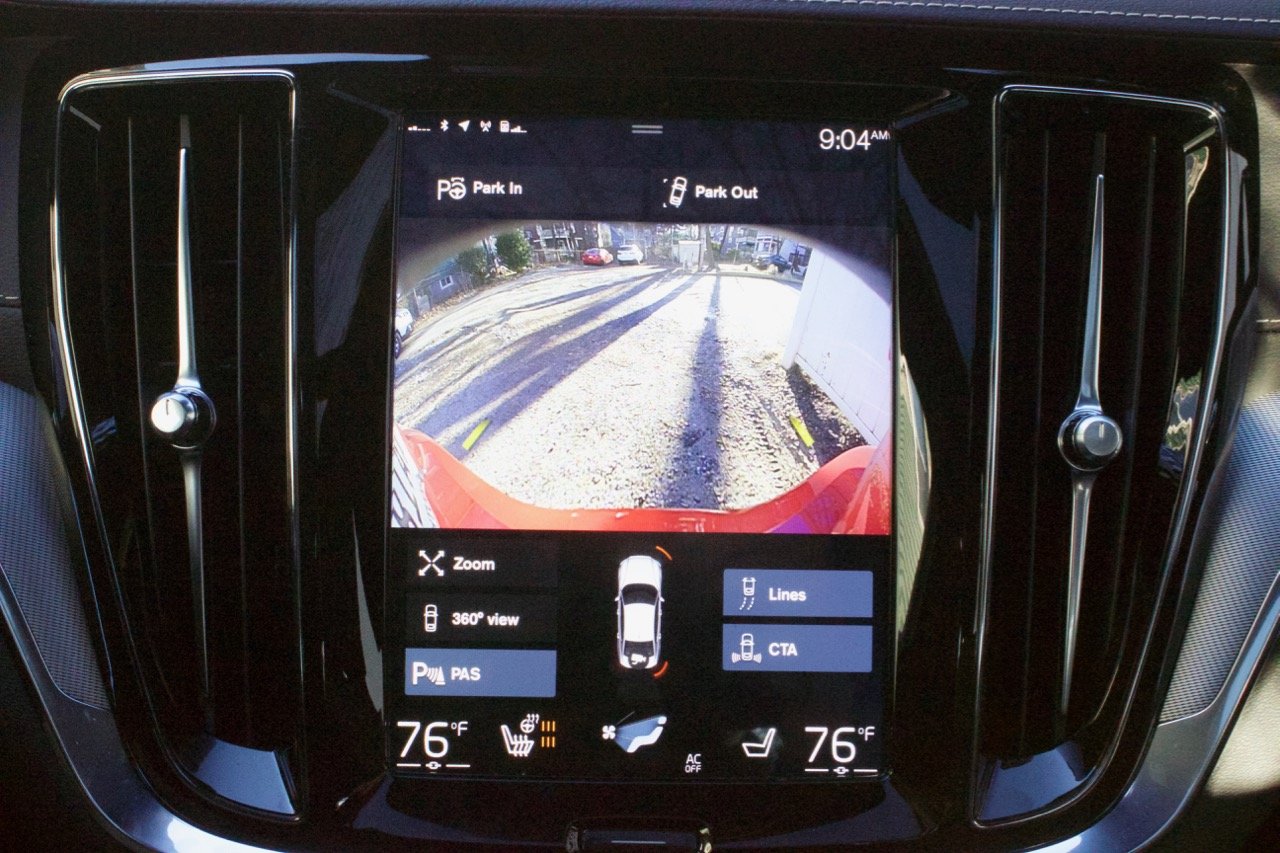 It’s hard to ignore the massive Sensus touchscreen infotainment system in the center of the dash. Many infotainment systems go for the Android/Apple imitation look, and the results can be quite mixed. But Volvo’s Sensus takes a tablet-like approach to menu navigation and graphics, and it looks great.

But here’s the problem: Too many features are tucked away into the screen. For example, if you want to change the temperature in one of the car's specific climate-control zones, you have to press the temperature icon, then select the temp, then close it. Given that you could just have a climate-control dial down below the screen, that’s three touches too many. Even rivals like BMW and Mercedes-Benz have dedicated climate controls below their infotainment screens.

There’s a steep learning curve to finding all the features available from the touchscreen, but it’s not all bad. There’s a Volume dial down below the screen with a Play/Pause button in the middle, and some buttons to skip tracks. Directly below the Sensus screen is the Home button, in case the operator gets lost among the menus and needs to bail out.

The other problem is that the system occasionally lags and even freezes, meaning there’s a chance you may get stuck on a particular function and then not be able to do anything else. Imagine being stuck on a Nickelback song at high volume and not being able to do anything about it, because the menu is frozen on the heated seat controls. No, thank you. 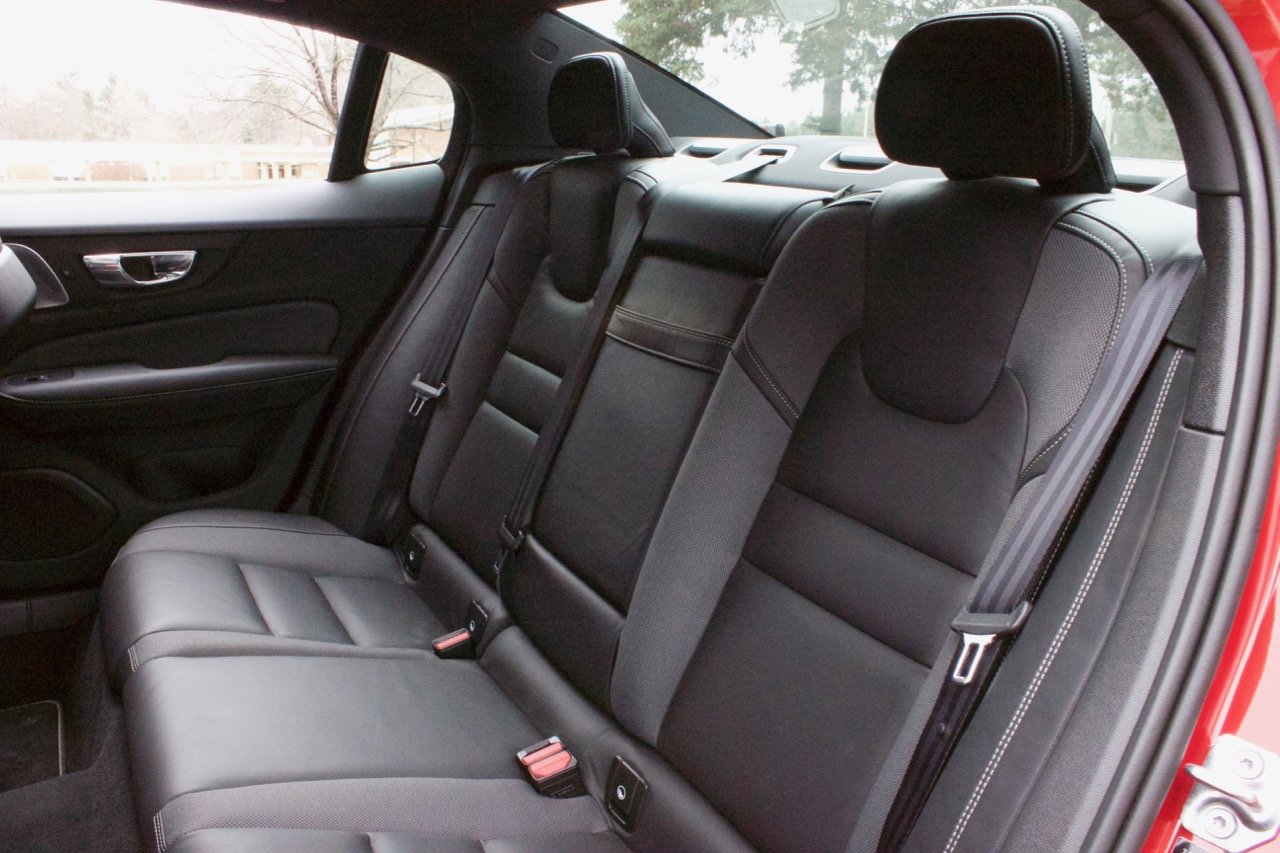 The S60 comes standard with front- and side-impact airbags, a reversing camera, and a tire-pressure-monitoring system. It also comes standard with driver-assistance systems such as forward-collision avoidance, lane-departure warning, and even traffic-sign recognition for the navigation system. 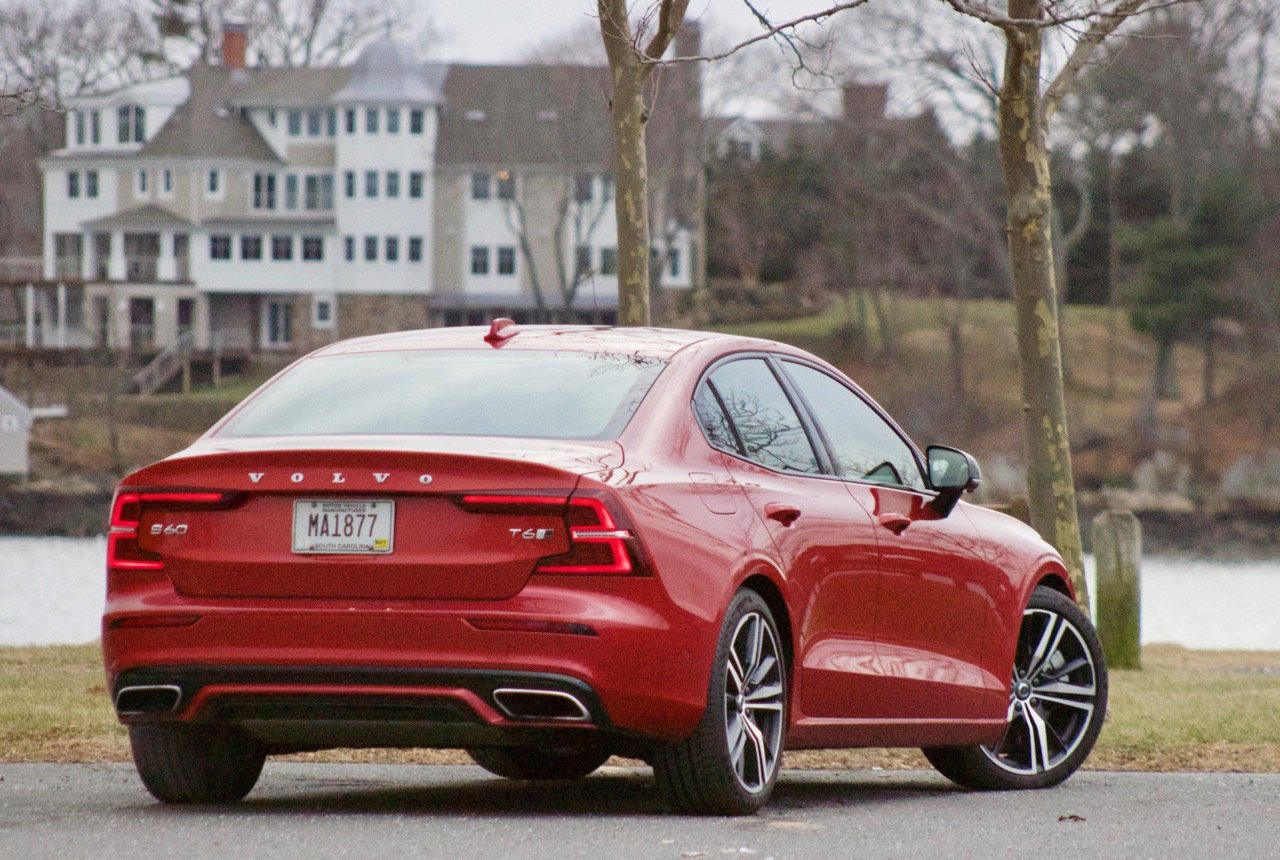 Volvo didn’t provide an official price for our specific R-Design test car—it was considered a pre-production model—but we built it online. The heated rear seats and steering wheel added $750, the Advance Package was $2,500, and the Bowers & Wilkins stereo added $3,200. With these options and packages, the price of our test car likely came to around $54,000.

That pricing falls largely in line with other popular small luxury sedans like the C-Class and 3 Series. Speaking of that competition, consider the qualms we had with the S60’s Sensus and the controls. Then look at the competition: Nearly every other luxury brand has some unique user interface that hasn’t really been optimized for daily use. BMW’s iDrive has gotten better, but from Mercedes-Benz COMAND, to Audi MMI, to Lexus Remote Touch, to Infiniti InTouch… if you actually want the best controls, buy a Toyota, Kia, or Jeep.

But here’s the thing: The styling of the S60 is so fantastic, so mature, so upscale, that we can overlook its warts. The S60 looks stunning inside and out, and just as importantly, it drives with the taut composure many buyers want from an upscale sports sedan.

Rcheskiewicz It's funny that this car score a 6 on tech, and a 6 on form and function. Your review didn't even touch on some of the more advanced systems this vehicle is equipped with, how easy is it to enter pilot assist/adaptive cruise control? The menu's on Sensus, once set initially, don't ever need to be adjusted again, a lot of which you shouldn't be trying to adjust while driving anyway. Everything else is central and accessible from the main screen quickly. Your starter, while different, is right next to the shifter, easy to see, unlike some brands that hide it behind the steering wheel or in some awkward position on the dash.

GuruC2R1V There is no problem reaching the starter or the gear shifter. Admittedly, the latter is a strange device but very easy to use. To take off four points in the tech category because there is a learning curve involved in the screen functions is very unfair. As mentioned above, if you’re fiddling with the screen while driving, you shouldn’t be.