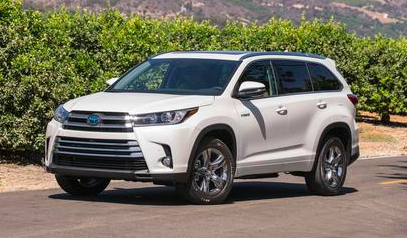 The Highlander, Toyota’s reliable rugrat hauler, has been around for nearly 20 years. Now in its third generation, it’s crawling across the finish line in anticipation of the fourth generation’s arrival later this year. As such, our hybrid test model's looking a little long in the tooth—especially in the tech department. New LED fog lights have been added to the two top-tier trims this year, as well as some black plastic cladding for LE and XLE trims' rocker panels, but otherwise, things remain unchanged in this generation of the Highlander Hybrid’s final year. 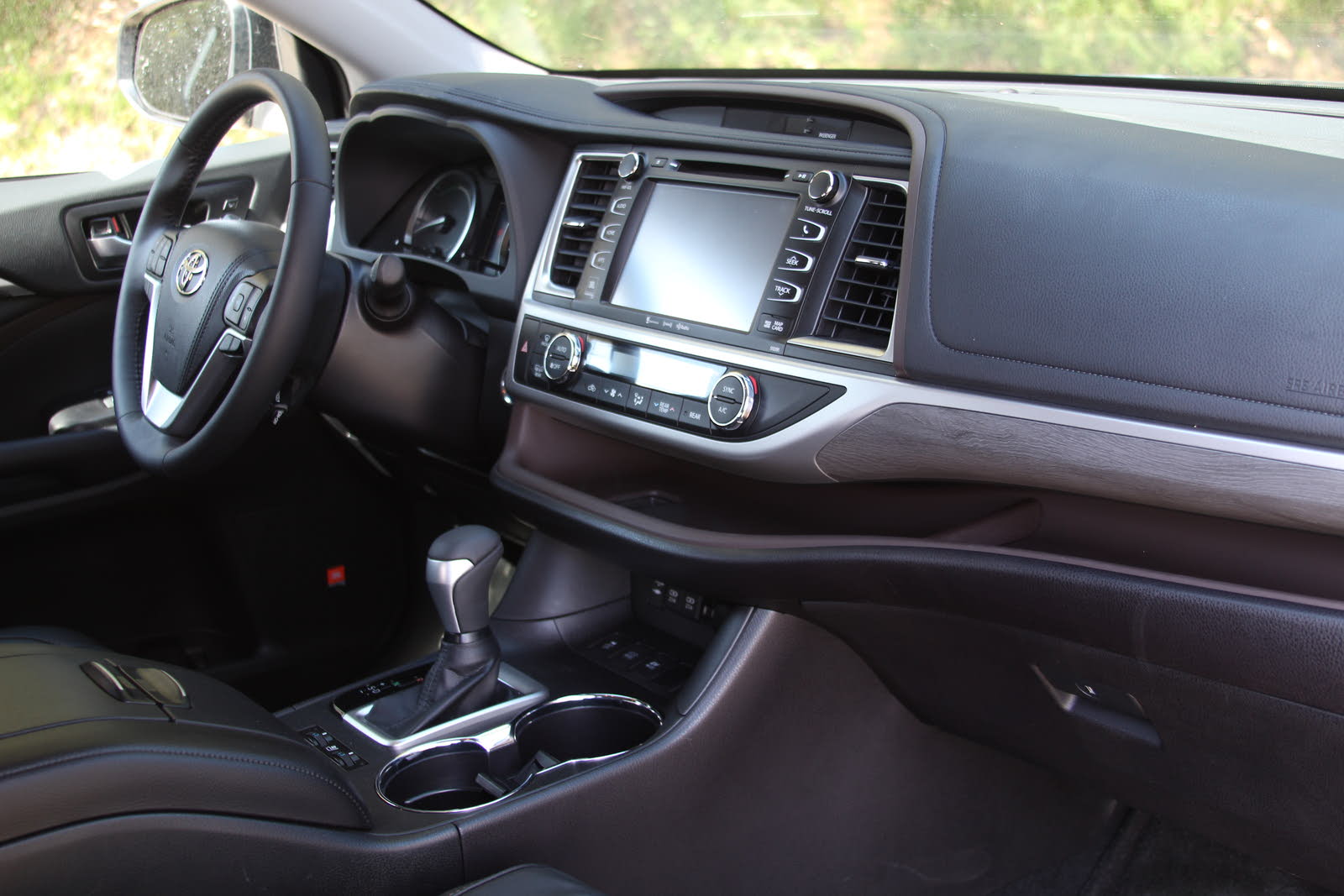 If you've been looking for a hybrid 3-row crossover and don’t want to pay luxury money, your options are limited to the Highlander, and they always have been. In the car world, competition drives innovation, and with no competition to speak of, the Highlander has been cruising along with some very outdated tech. While the outdated infotainment would be enough to turn off many shoppers, Toyota’s refusal to include tech favorites like Android Auto and Apple CarPlay has put the Highlander Hybrid in a unique position in the market.

Still, that doesn’t mean you should discount the Highlander Hybrid entirely. With a wealth of standard safety features as well as safety and reliability scores that would make any manufacturer jealous, this vehicle is a great place to put your family.

The trim lineup starts with the LE, and while I often advise skipping over the base trim, this is not one to overlook. Not only are you getting the Highlander Hybrid's incredible standard safety suite, but the Hybrid’s base trim gets a 3.5-liter V6, as opposed to the 2.5-liter 4-cylinder engine in the conventional Highlander LE. Likewise, the Hybrid offers standard all-wheel drive (AWD), which is optional on the conventional Highlander. Other notable standouts include a windshield-wiper de-icer, keyless entry and ignition, dual-zone auto climate control, and a 6.1-inch touchscreen, all for the Highlander Hybrid LE’s base MSRP of $37,320.

An extra $5,060 will get you into the XLE, where you’ll enjoy a long list of notable upgrades. A sunroof, heated power front seats, tri-zone climate control, and upgraded interior materials will make your experience inside more enjoyable, while foglights, a power liftgate, and a traditional power outlet in the second row will give you some added utility. Tech upgrades include satellite and HD radio, navigation, an 8.1-inch touchscreen, and some added safety tech in the way of blind-spot monitoring and rear cross-traffic alert.

$45,860 will get you the Limited trim. Here, comfort is upgraded via heat and ventilation for the leather front seats, a driver's seat memory system, and second-row captain’s chairs which drop passenger capacity by one. LED running lights and rear parking sensors add a bit of extra safety, while a 12-speaker JBL stereo means all your passengers will get to enjoy the same sound quality throughout the cabin.

My week with the Highlander Hybrid was spent in the Limited Platinum trim. With a starting MSRP of $48,980, most of the upgrades are tech-related. Automatic wipers, a 360-degree parking camera, front parking sensors to match the rears, and heat for the steering wheel and rear outboard seats all aim to make life easier, while a panoramic sunroof will make the cabin a nicer place to spend some time. The only option mine had was a $264 charge for carpeted floor- and cargo mats. With a $1045 delivery fee, that brought my walkaway price to $50,289. 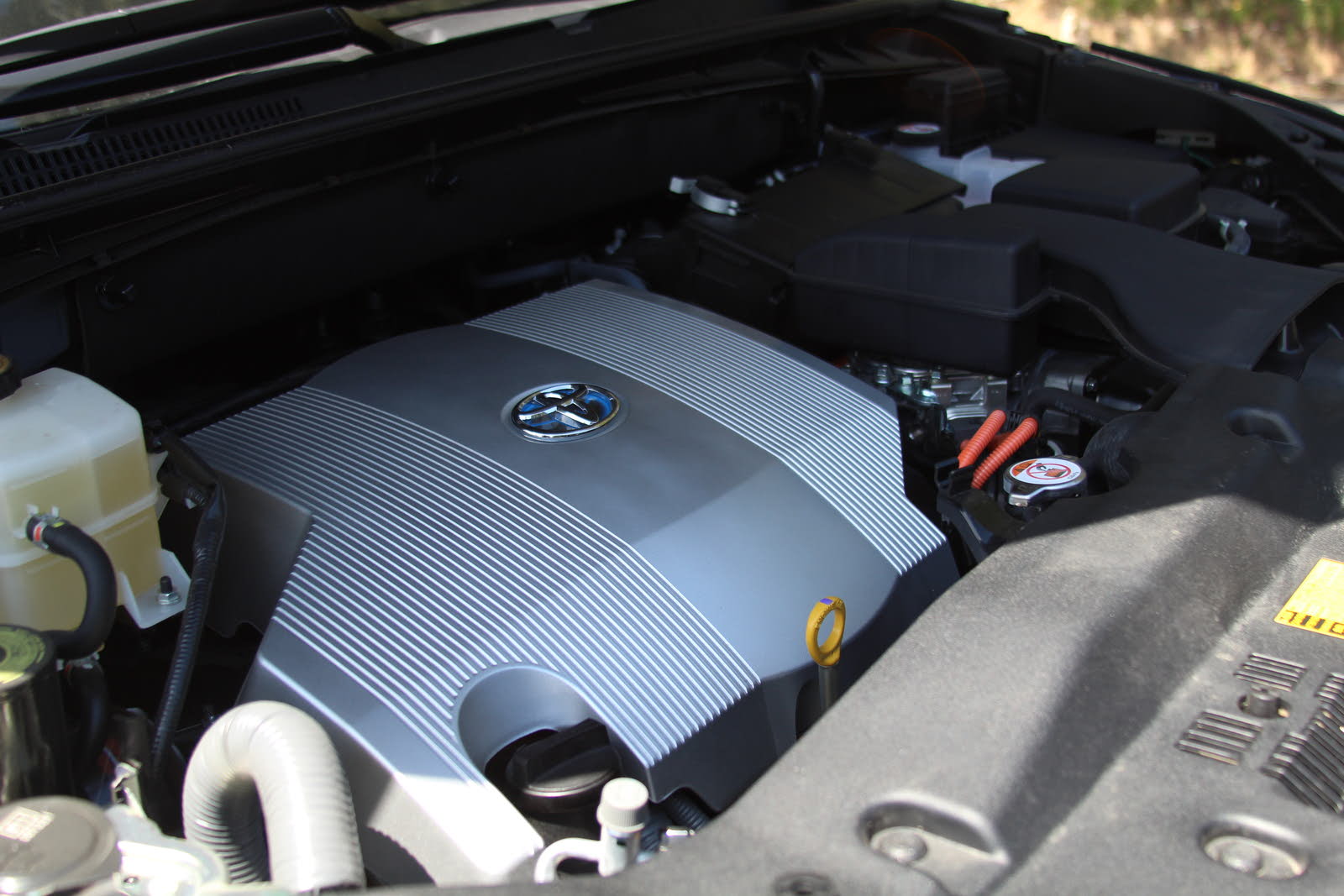 Whereas most hybrids (and even the base conventional Highlander) gravitate toward 4-cylinder engines, the Highlander hybrid starts with a 3.5-liter V6 engine. Paired with 3 electric motors for 306 net system horsepower, the setup is unfortunately held back by a very lackluster CVT. There’s plenty of power for around town and highway passing, but the CVT drones so loudly that I was convinced there must be a 4-cylinder engine under the hood, struggling to move all that bulk. You can expect 60 mph to come in about seven and a half seconds, and properly equipped, the Highlander Hybrid can tow up to 3,500 pounds—a 1,500-pound penalty from the conventional model.

While a unibody crossover with no low-range gearing typically isn't considered "rugged," the Highlander Hybrid can actually handle a bit of off-road duty thanks to a slightly sophisticated standard AWD system and 8 inches of ground clearance. Don’t have any aspirations of rough, rugged, off-road adventures, and you should be satisfied.

While an EPA-estimated 29 mpg city, 27 mpg highway, and 28 combined (29 for the base LE Hybrid) is a nice upgrade from the conventional Highlander’s 21/27/23, I had trouble trying to replicate those numbers. Hills, cargo, extra passengers, and hard acceleration (like when trying to merge or pass) will destroy your advantage here, making it much harder to justify the extra cost of the Hybrid. Doing the math, if you go with the base Hybrid LE, you’re going to spend $37,320—nearly $6,000 more than the conventional Highlander LE—to get a theoretical extra 6 mpg. That’s a thousand dollars per mpg.

The numbers improve a bit higher in the trim lineup, with the price difference between the top-tier Limited conventional and Limited Hybrid being a little more than $3,000, but with expected fuel savings of only a few hundred dollars per year versus the regular V6 Highlander, that just doesn’t add up to me—especially considering I couldn’t get it to roll in EV mode for any substantial amount of time. If you press the pedal more than 20% or encounter any hills, the gas engine engages. There’s nothing more frustrating than a feature you paid for that simply doesn’t work. 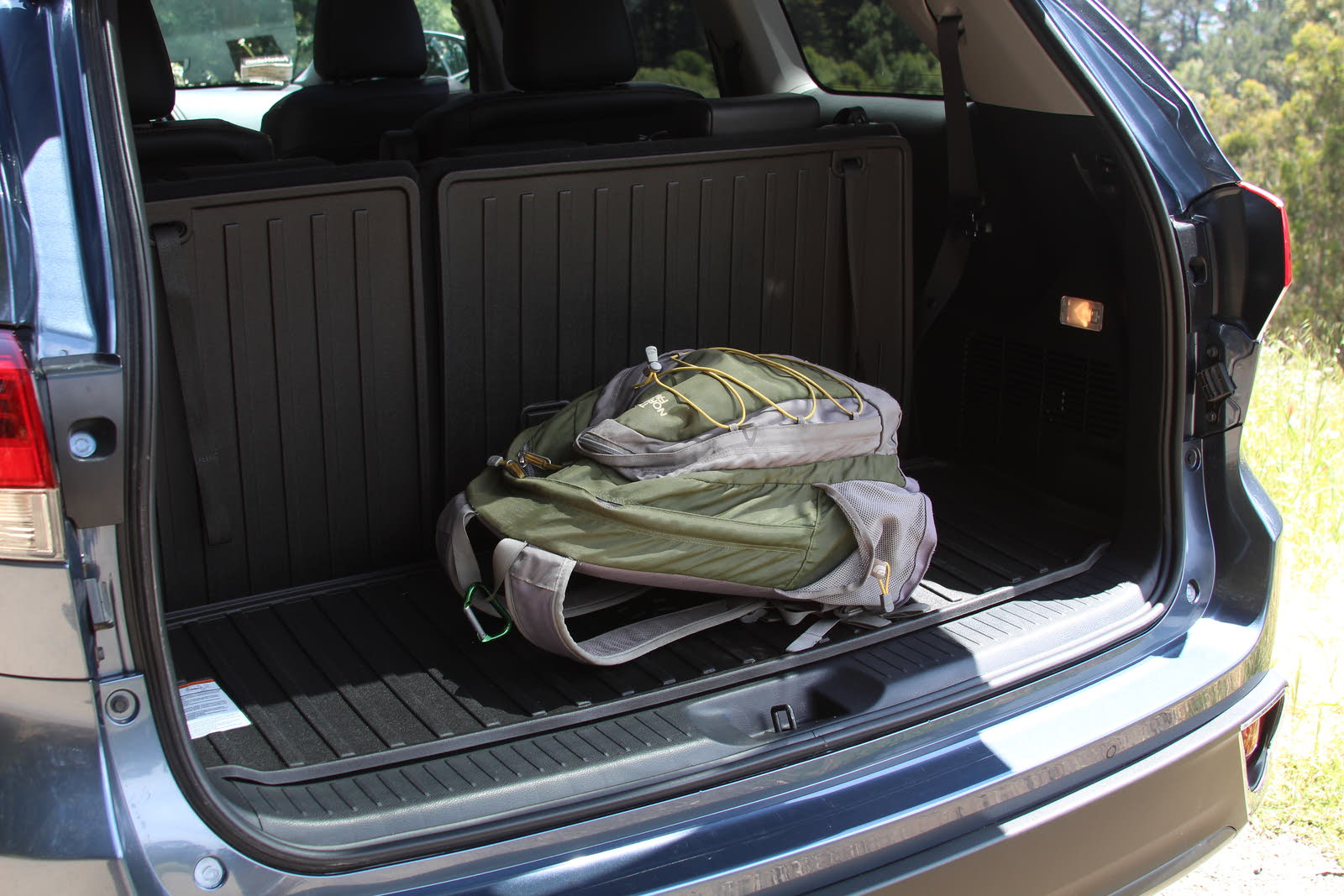 One distinct plus with the Hybrid is that the addition of the batteries did nothing to impact the Highlander’s 13.8 cubic feet behind the rear seats. Drop all the seats and you’ll be treated to 83.7 with fold-flat rears, which make loading a breeze. Competitors do offer more rear cargo capacity, but 13.8 should be fine for most jobs, and interior space in the second row is a nice tradeoff here, though you’ll find the third row cramped.

The Hybrid model hasn't been tested, but special note should be made for the fact that the Insurance Institute for Highway Safety (IIHS) has given the conventional Highlander's child-seat hardware its highest rating of Good for ease of use, and that’s supremely important for anyone having to shuffle seats around on the regular. The second-row captain’s are quite easy to slide, if a bit heavy, and there are plenty of USBs as well—three up front and two for the second row, though none for the third.

I do have a complaint about the infotainment system that’s solely sequestered to its physical design. The buttons and dials are simply too far away for either the driver or the passenger to reach comfortably, meaning you’ll have to lean forward in your seat quite a bit before you can adjust anything. Also, the buttons alongside the touchscreen don't have any feel to them, so you’re never really sure if you’ve successfully pressed them. Hopefully these issues will be addressed with the 2020 Highlander due later this year. 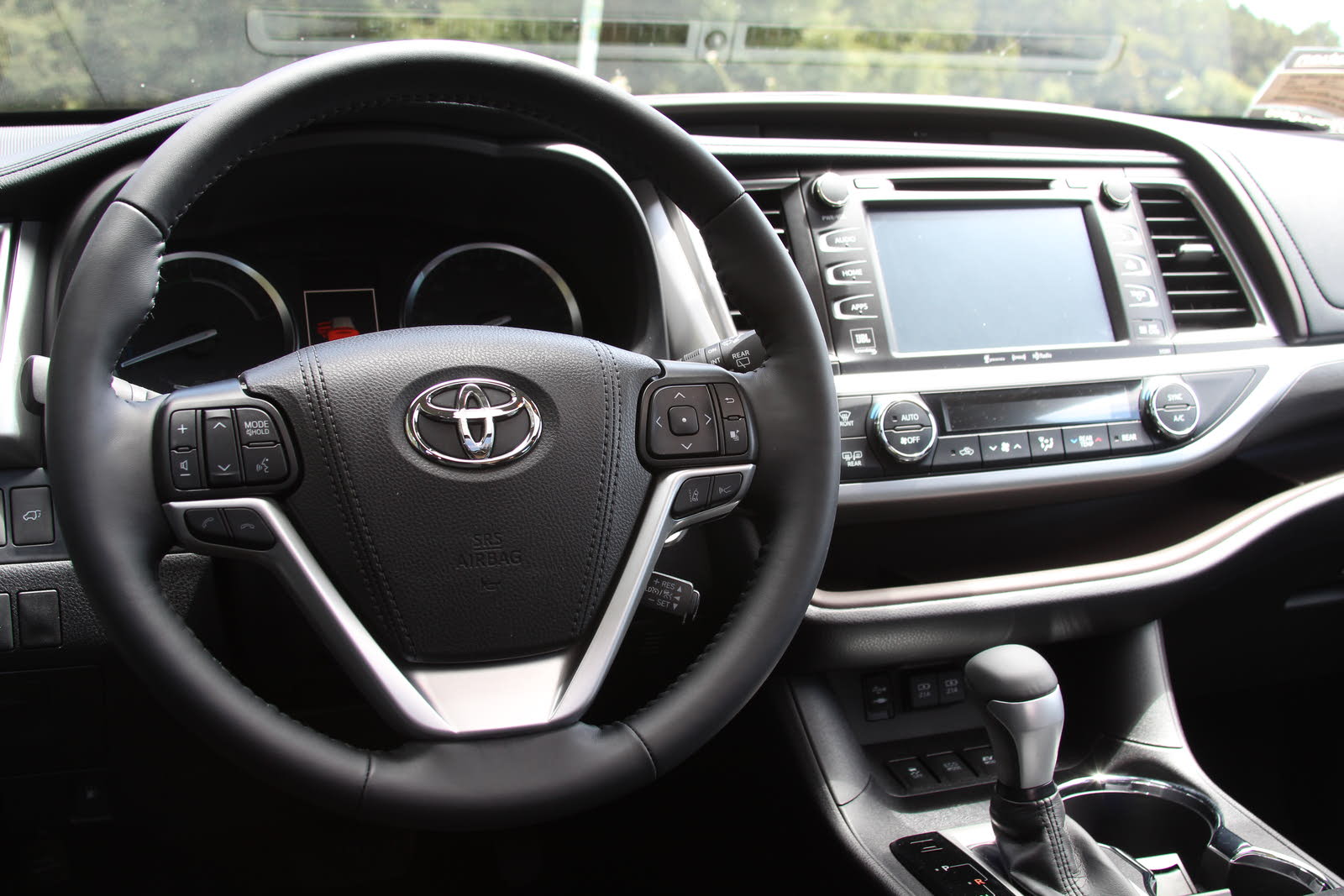 The Entune system, even with this updated interface, is still antiquated and outdated. The lack of Android Auto or Apple CarPlay is a serious and continuing offense that we can only hope will be righted with the release of the next generation. Some praise is due for the inclusion of all these USB ports, especially considering they’re standard. Standard safety systems shouldn’t be ignored here either; they're a major part of the Highlander’s appeal.

The base, 6-speaker stereo is a little overwhelmed by the Highlander Hybrid's vast space; it's hard to fill all those cubic feet with sound. We recommend the upgraded 12-speaker JBL system, but it's a shame you can get it on only the Limited and above. To make the most of the tech available, you should at least consider the XLE with its second-row household-style power outlet, 8.1-inch touchscreen, satellite and HD radio, and navigation. 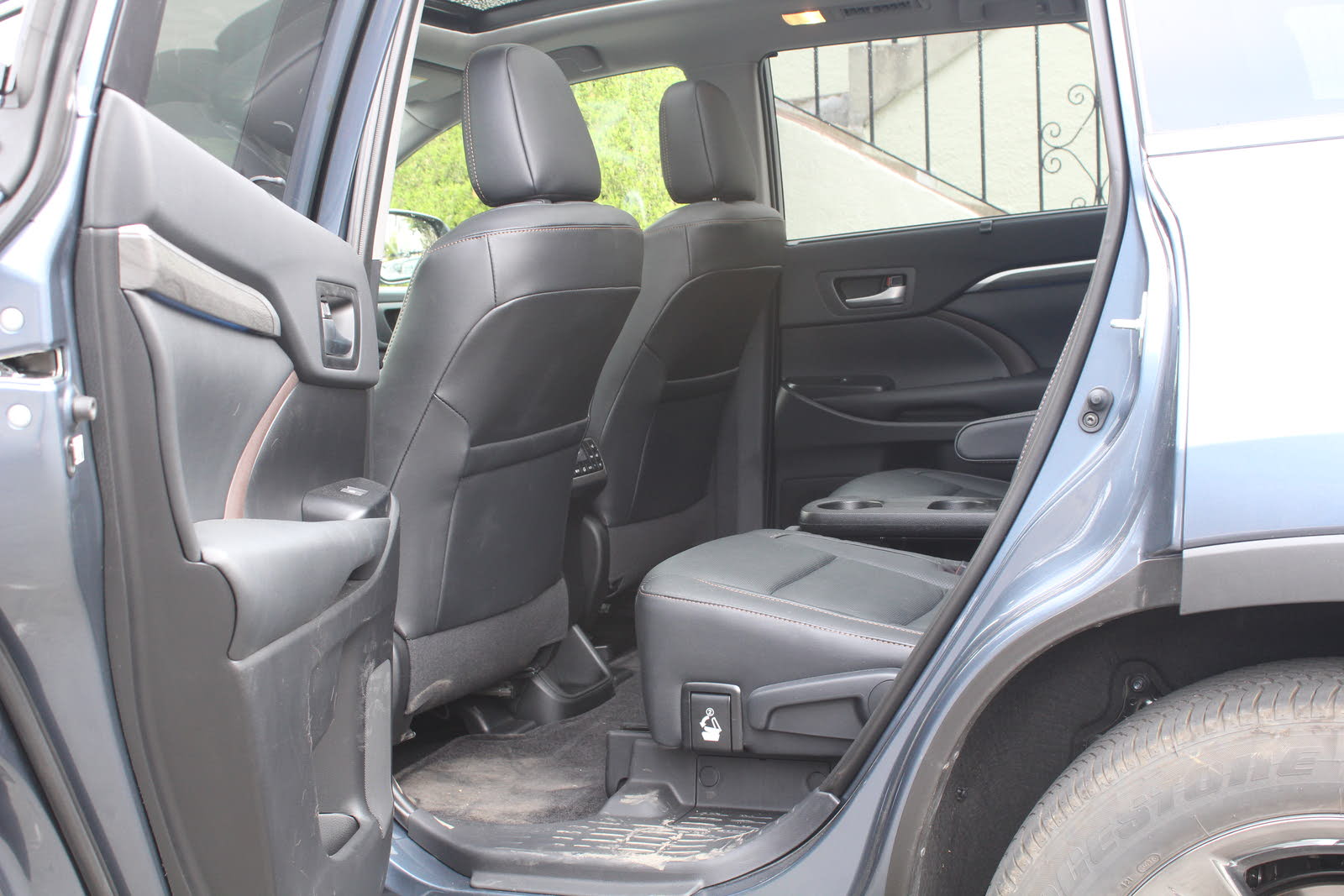 In the end, this is the Highlander Hybrid’s strong suit. You can’t expect it to be the fastest, the most nimble, the most rugged, or the most tech-laden, but you can expect it to be safe. Every Highlander—Hybrid or otherwise—comes standard with a pre-collision system featuring pedestrian detection, auto high-beams, dynamic cruise control, and lane-departure alert with steering assist. Go with the XLE or higher, and you’ll get blind-spot monitoring with rear cross-traffic alert as well. That all adds up to a 5-star safety rating from the government’s National Highway Traffic Safety Administration (NHTSA) and the identical 2018 Highlander being named a Top Safety Pick from the IIHS.

But there’s some bad news there as well. For a vehicle and company that prioritizes safety so heavily, braking is less than ideal. A regular Highlander drops from 60 mph in a very lengthy 128 feet, nearly the worst in the segment, and with the Hybrid tacking on another 300 pounds with the electric motors and batteries, that number is only going to get worse. This car is also not very composed under hard braking, which isn’t reassuring and not something I’ve noticed with the conventional Highlander in previous tests. 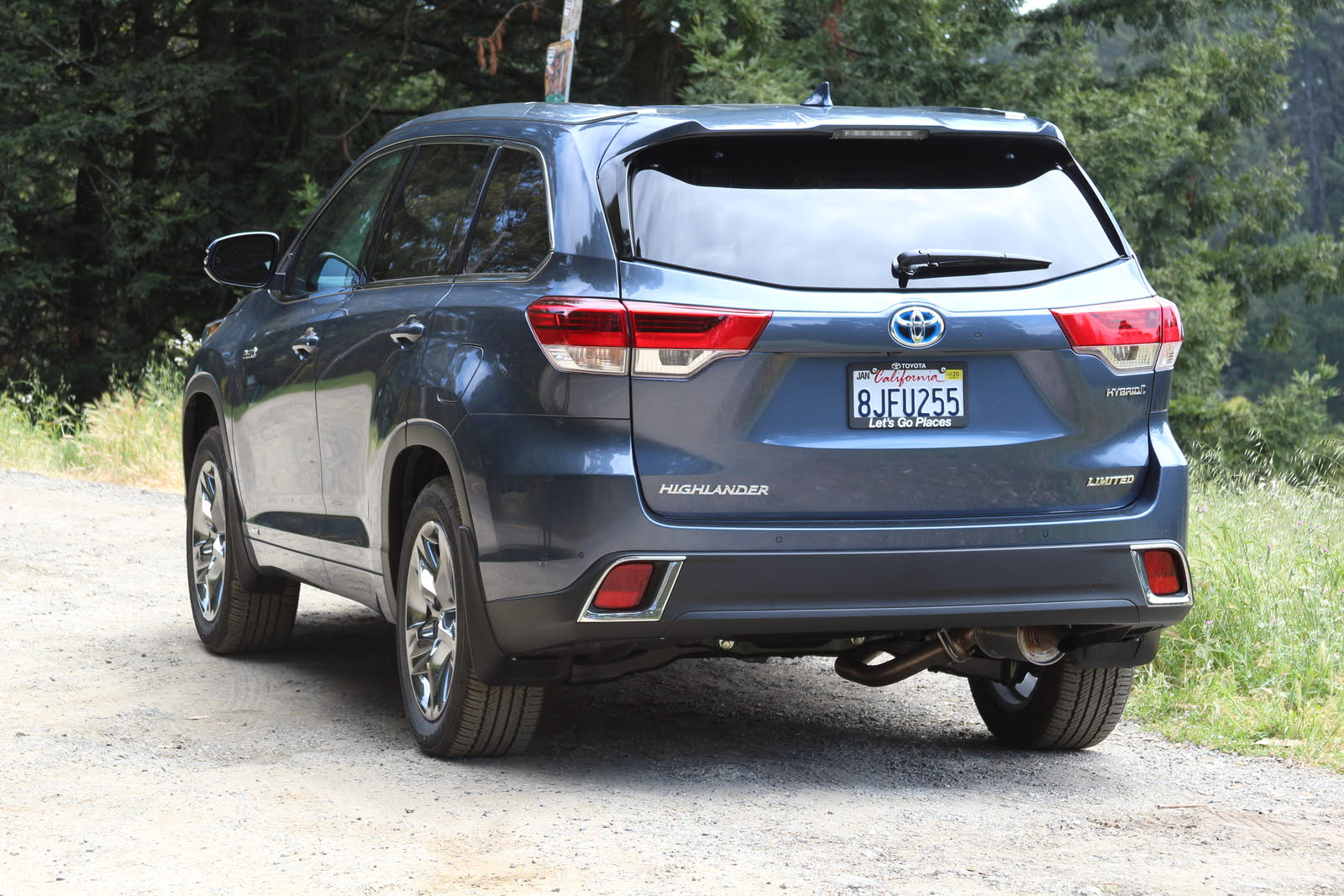 Given the extra money you have to shell out for the Hybrid and the penalties that come along with that decision, I can’t really say that it’s a cost-effective decision. The regular Highlander has its strengths and a place in the 3-row crossover field—the safety ratings and reliability alone demand your attention—but with the extra money you have to pay for Hybrid privilege, with the weight penalty you’ll suffer and the little benefit you’ll receive in the form of increased efficiency, I just can’t see spending the extra money—especially considering there's a redesign waiting right around the corner. For now, patience is your friend. There’s a better Highlander on the way.

What's your take on the 2019 Toyota Highlander Hybrid?

Have you driven a 2019 Toyota Highlander Hybrid?
Rank This Car

Just bought ‘19 Hybrid Toyota Hylander Platinum AWD and after 800 miles after starting when I put it in gear it makes a high pitch whining noise. It’s worse in Reverse. When I accelerate it stops....

My 2019 Hylander Hybrid Will Not Hold A Charge More Than 4 Days .Why?

My 2019 Highlander Hybrid will not hold a charge more than 4 days if it is not started and run before this time period.The Toyota dealer says there is nothing wrong with the car. I have never had a ne...

122 views with 6 answers (last answer about a year ago)

Is The Advertised Price On CarGurus Binding?

How binding are the prices advertise on your site. My question arises from Whitby Toyota. They sent out a price through CarGurus for$47,995.00 for a 2019 Highlander Hybrid. I requested contact and h...