The 2019 Subaru Forester continues to set the curve in a segment it helped make popular more than 20 years ago. 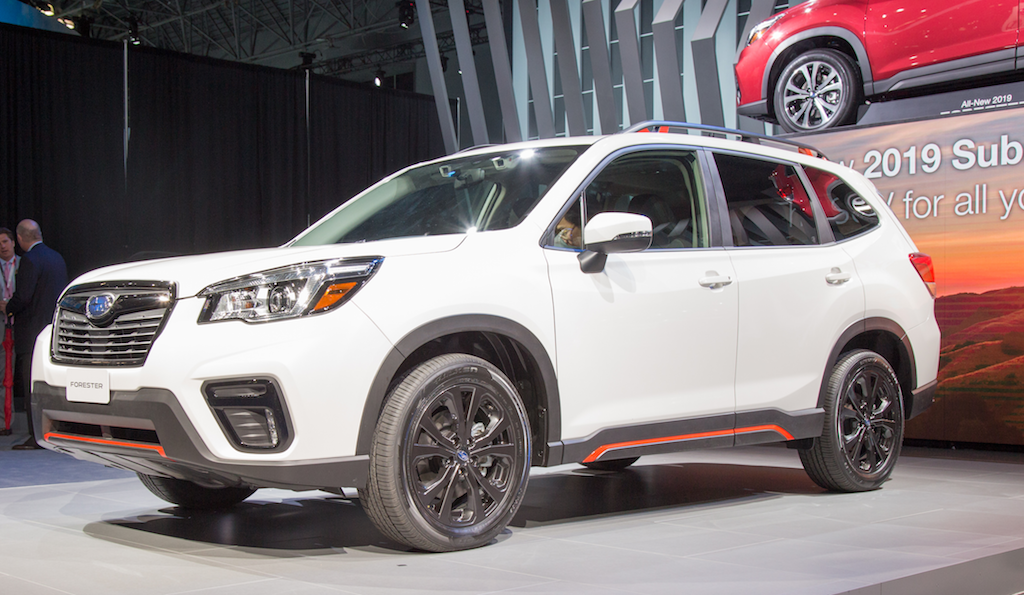 Consumers are hungry for all-weather capability, plenty of space for passengers, and plenty of space for the gear that comes with those passengers. Crossovers can offer all of this, while also providing solid fuel economy. So, it makes sense that crossovers of different sizes and price ranges are dominating the new car market. Nearly every automaker out there today offers at least one, if not multiple crossovers, in their showrooms.

But while this is a new trend for some brands, Subaru has been offering multiple vehicles that fit the crossover formula for decades.

In particular, the Subaru Forester has been around since 1997. When it arrived, the Forester provided standard all-wheel drive, reasonable fuel economy, plenty of cargo space, and an affordable base price. It was not the first vehicle to come standard with all-wheel drive—that would be the AMC Eagle of the 1970s. But the AMC brand is no more, and the '97 Forester offered all these attributes while also being incredibly reliable, and thus set the blueprint for the modern crossover craze.

The modern compact SUV market includes popular vehicles like the Honda CR-V, Toyota RAV4, Mazda CX-5, Volkswagen Tiguan, and more. With all these rivals, can the all-new 2019 Subaru Forester once again set the curve in this segment? 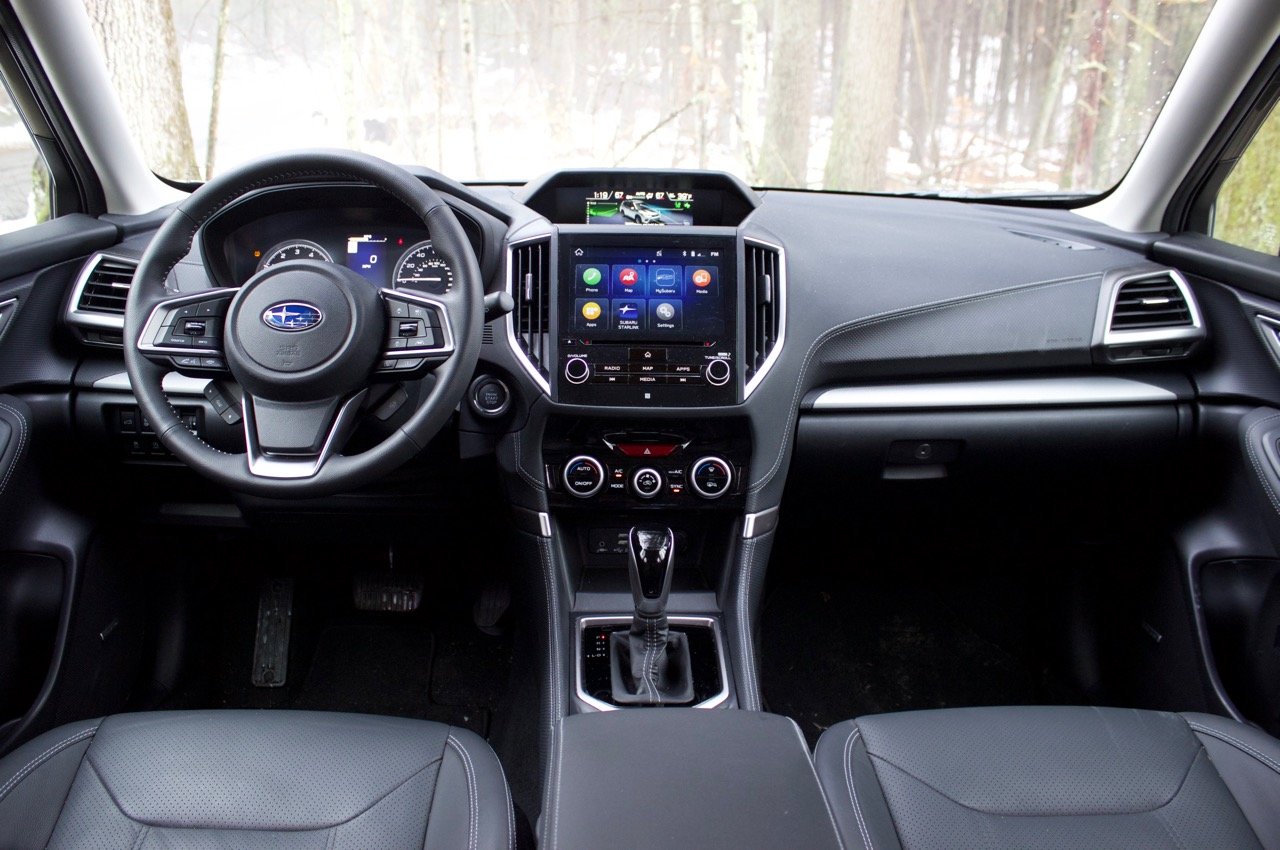 The new Forester is slightly larger and slightly wider than its predecessor. The exterior design is that of a scaled-down version of the new Subaru Ascent, which makes sense since earlier this year we called the Ascent a scaled-up version of the Forester, complete with a third row.

That inspiration continues in the cabin, which looks modern but doesn’t go for the same smooth aesthetic as some competitors. The Forester puts function above all else, so design choices are a luxury that comes after making sure all utility aspects are considered. 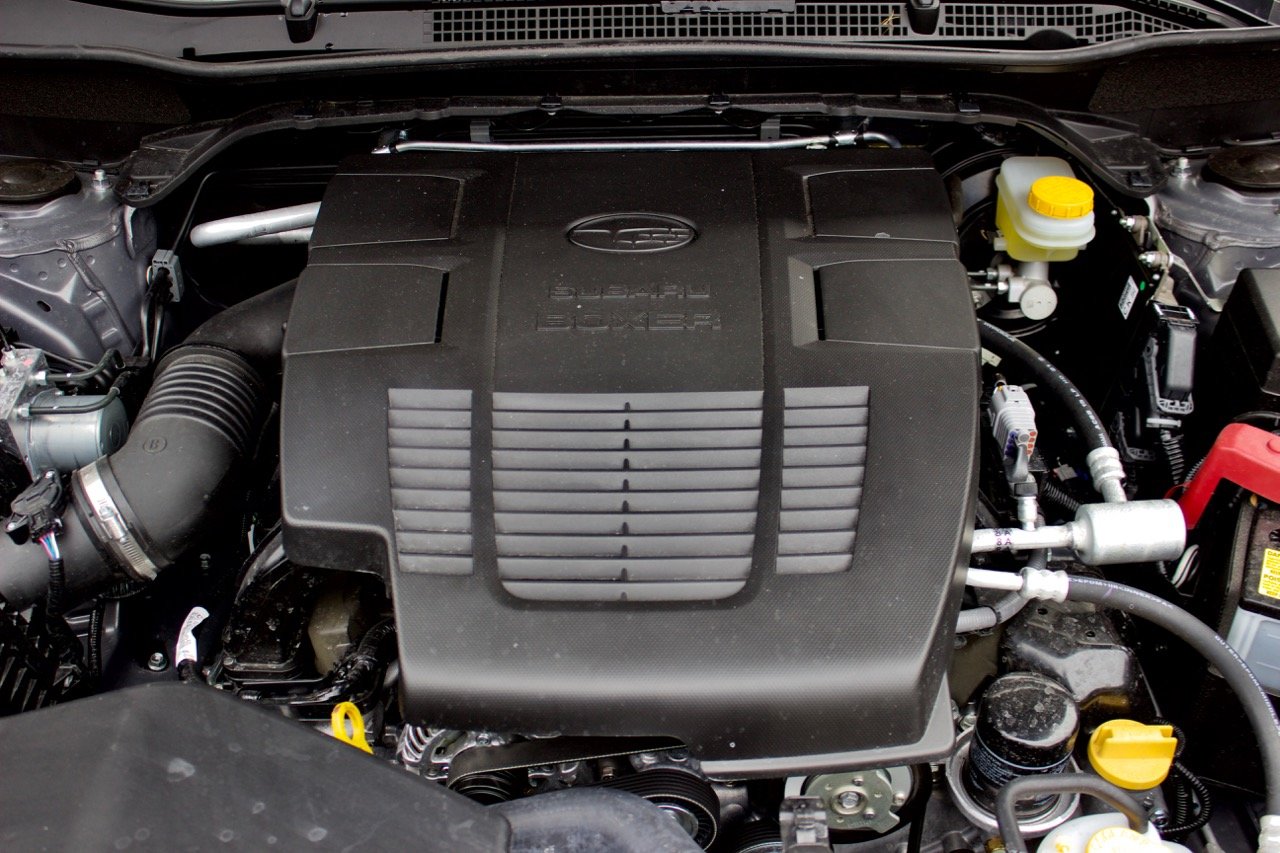 When you open the hood, you might be surprised to find the near-comical amount of open space in the new Forester's engine bay. This has been a recent trend among many automakers, building up the height of the fenders and hood well above the small engine within. This is often done to protect the car's structure against crashes as well, but in the case of Subaru, much of that open space is due to the automaker’s use of boxer engines.

Rather than the inline 4-cylinder engines many automakers in this segment use, the Subaru boxer engine is comprised of two banks of cylinders, laid flat and opposing each other. The two banks of cylinders literally “punch” at each other, hence the name. These types of engines run smoothly and provide a much lower center of gravity compared to inline engines.

In the case of the 2019 Forester, it's a 2.5-liter 4-cylinder boxer engine, making 182 horsepower and 176 pound-feet of torque. Those numbers are up from 170 hp and 174 lb-ft in the previous Forester. The 12-hp bump is welcome, but the torque increase is just 2 lb-ft, and that’s important to note. People think horsepower is the only number that matters, but when you step on the gas, it’s the torque that helps your car make that initial leap forward. And neither this vehicle nor its predecessor had adequate torque.

But the outgoing 2018 Forester was at least available in the 2.0XT trim, which featured a turbocharged 4-cylinder engine, making 258 hp and 250 lb-ft of torque. But this new 2019 Forester? No XT option available. The only engine offered to buyers is this lackluster one.

It is perhaps ironic then that Subaru offers the new Forester in a “Sport” trim, complete with the weak engine as the only option. Subaru may eventually offer a more potent powerplant in the future, but for now, it’s funny how a Sport is offered the year they remove the actual engine that would help the trim live up to its name.

The Forester comes standard with symmetrical AWD, and power is routed to this system through a continuously variable transmission, or CVT. These transmissions are typically designed for efficiency over performance, and the Forester's is no different, resulting in underwhelming acceleration.

There is some hope, as Subaru makes SI-Drive standard across the trim lineup to help get a bit more oomph out of this engine. It works a lot like a drive mode button in other cars, tuning the throttle response, CVT tuning, and power delivery to “I,” for Intelligent, or “S,” for Sport. The buttons are located on the steering wheel. This is a far more logical place for them than down by the shifter, which can be seen in other cars.

You still get toggles down by the shifter, including the dial for the X-Mode terrain-management system. X-Mode works with the AWD and hill-descent control, and it modulates throttle and CVT tuning for optimal power delivery in various driving conditions. All trims get X-Mode, but Premium, Sport, Limited, and Touring trims come with a dual-mode X-Mode system. The dial down below the shifter can select Normal Mode, Snow and Dirt Mode, or Deep Snow and Mud Mode.

Any great automotive feature should be able to perform its task and avoid detracting from the vehicle as a whole. For example, this writer happens to love the Jeep Wrangler, but recognizes that its incredible off-road capabilities come at the cost of general on-road driving manners. This is where Subaru excels, because it has been offering standard AWD for years.

So, despite all the off-roading gadgetry, the Forester has a really smooth ride. It’s light on its feet around town, and despite being on the tall side, doesn’t have too much body roll in corners. Highway driving is refined as well, and the suspension does an incredible job soaking up bumps in the road. It’s one of the few car-based crossovers that doesn’t make me wince right before I drive over a big pothole. Acceleration is still its weakest point, but press S when getting on the highway and you’ll be fine.

Fuel economy for the 2019 Forester is 26 mpg city, 33 highway, 29 combined. In my time with the Forester in mixed driving conditions, I found fuel economy of 28.9 mpg. 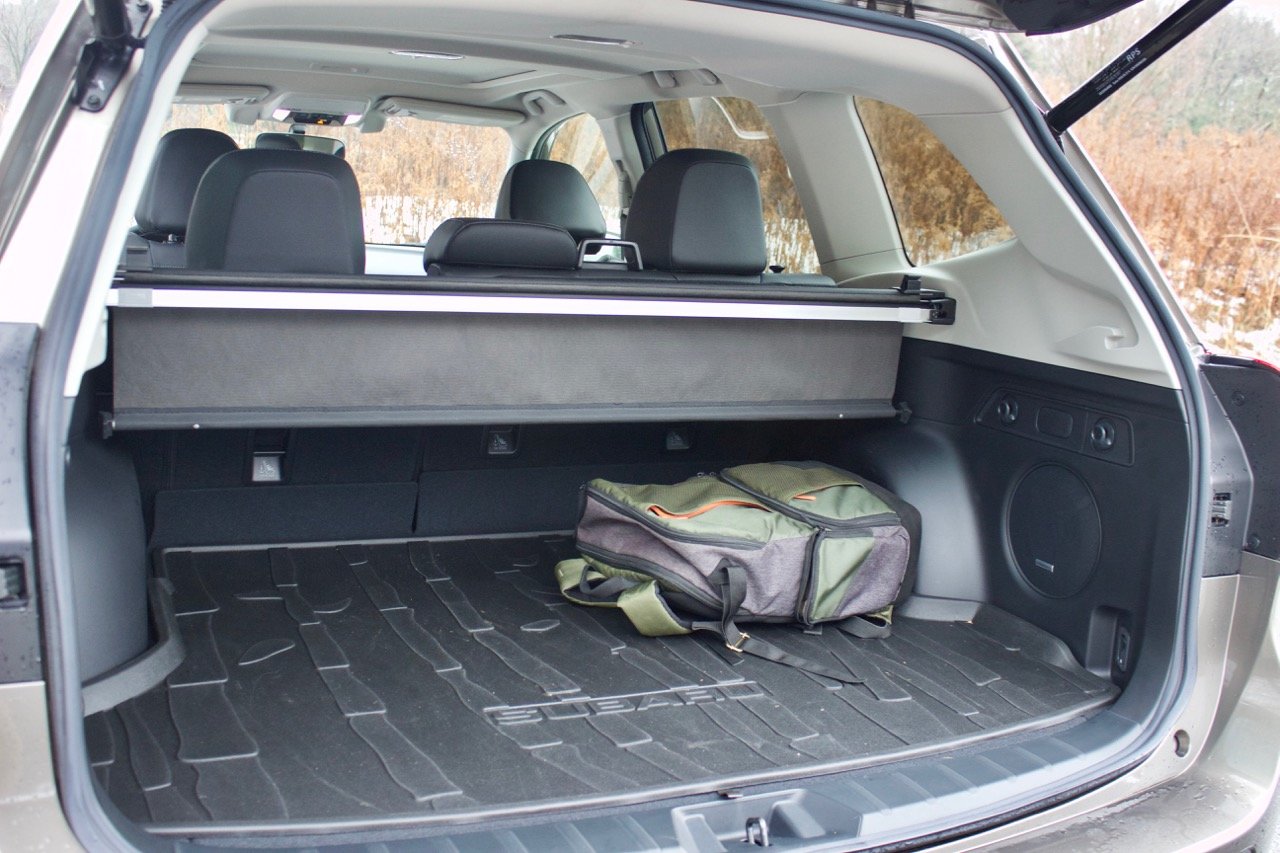 As previously noted, the new Forester is slightly larger than the 2018 model. It’s only a few inches longer and a hair wider, but its tailgate opening is an impressive 5 inches wider. Typically going for the base model of any car means giving up on a few creature comforts, but selecting the base trim of the Forester means you get something the other trims can't offer: a class-leading 76.1 cubic feet of cargo space. All other trims have a still-respectable 70.9 cubic feet. For cargo-space context, the 2018 Toyota RAV4 has 73.4 cubic feet, the Honda CR-V has 75.8, and the Volkswagen Tiguan has 73.5 cubic feet.

The new Forester’s larger wheelbase results in more backseat space, and its 8.7 inches of ground clearance are great for clearing dirt and snow. But the combination of ground clearance and seat height is also a value-add for older buyers, who may struggle with the low seats of a sedan or the high step-in height of trucks and full-size SUVs.

Subaru is one of the few brands that embraces my favorite philosophy: “Function First.” The cabin looks sharp enough, but it has cubbies, compartments, and bottle holders everywhere. The tall greenhouse provides a commanding driving position with plenty of legroom and tons of headroom. The greenhouse, combined with the driving position, also provides excellent rearward visibility. This aspect has become a rarity among modern crossovers, where massive C-pillars and small rear windows have made reversing cameras, blind-spot monitoring systems, and rear cross-traffic alert systems almost a necessity in most rivals. 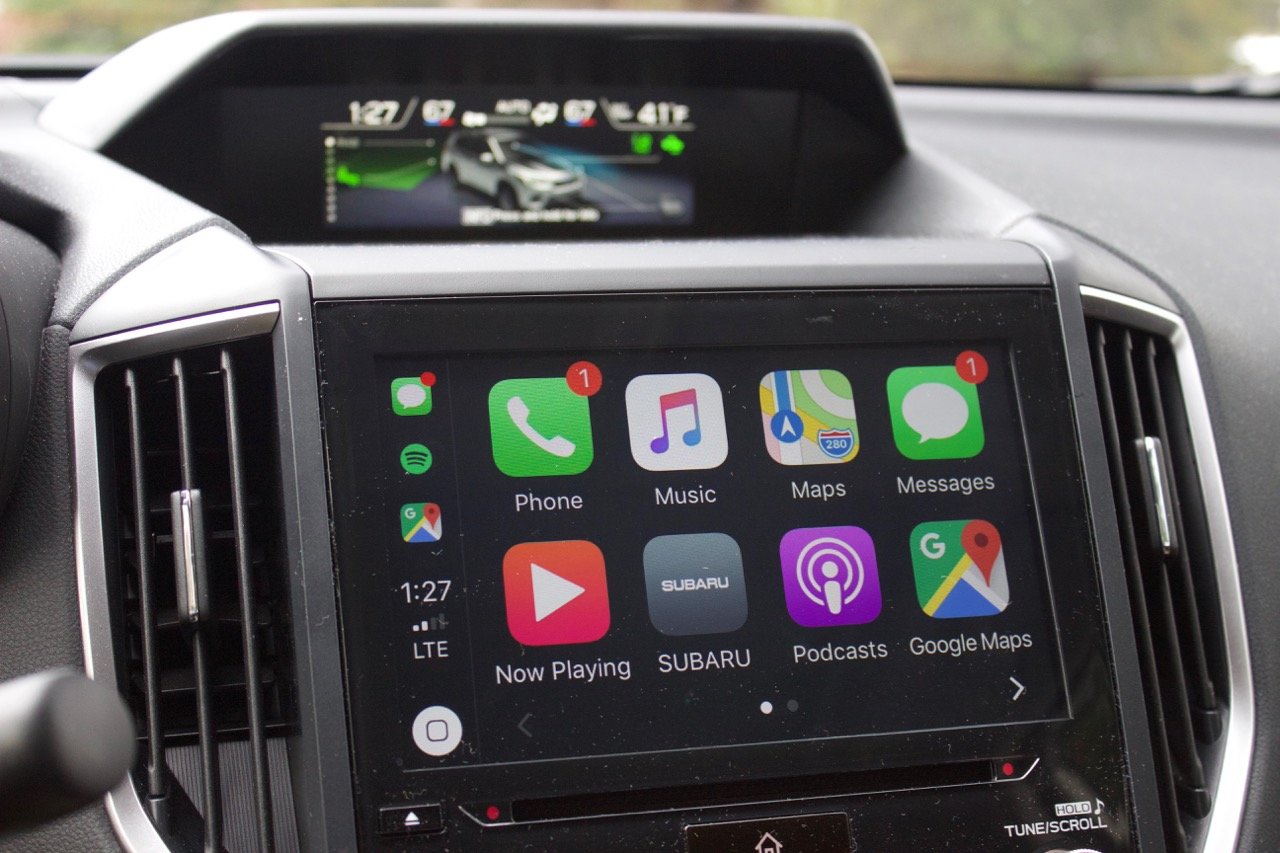 Whether it uses the 6.5-inch screen in the base and Premium trims or the 8-inch screen that’s optional in the Sport and standard in the Limited and Touring, the Starlink system is quite good. Subaru’s infotainment system is responsive, has high resolution, and provides standard Apple CarPlay and Android Auto.

Swiping through menus and navigating the screen is very intuitive, and the icons, colors, and fonts are all easy to read. Transitioning from Starlink to CarPlay and back is quite seamless, which isn’t always a guarantee with modern infotainment systems.

Subaru’s EyeSight suite of driver-assistance systems is mostly about safety, but one particular component is a fantastic tech-based feature. It’s called Lead Vehicle Alert, and it works like this: Say a driver of this new Forester is queued up at a stoplight, the light turns green, and the driver hasn’t noticed it. If the vehicle ahead of the Forester pulls away, and the driver hasn't moved, Lead Vehicle Alert provides an audible beep and a graphic alert. There are many things to distract drivers these days, and Lead Vehicle Alert is a way to make distracted driving less of a nuisance for other drivers on the road. 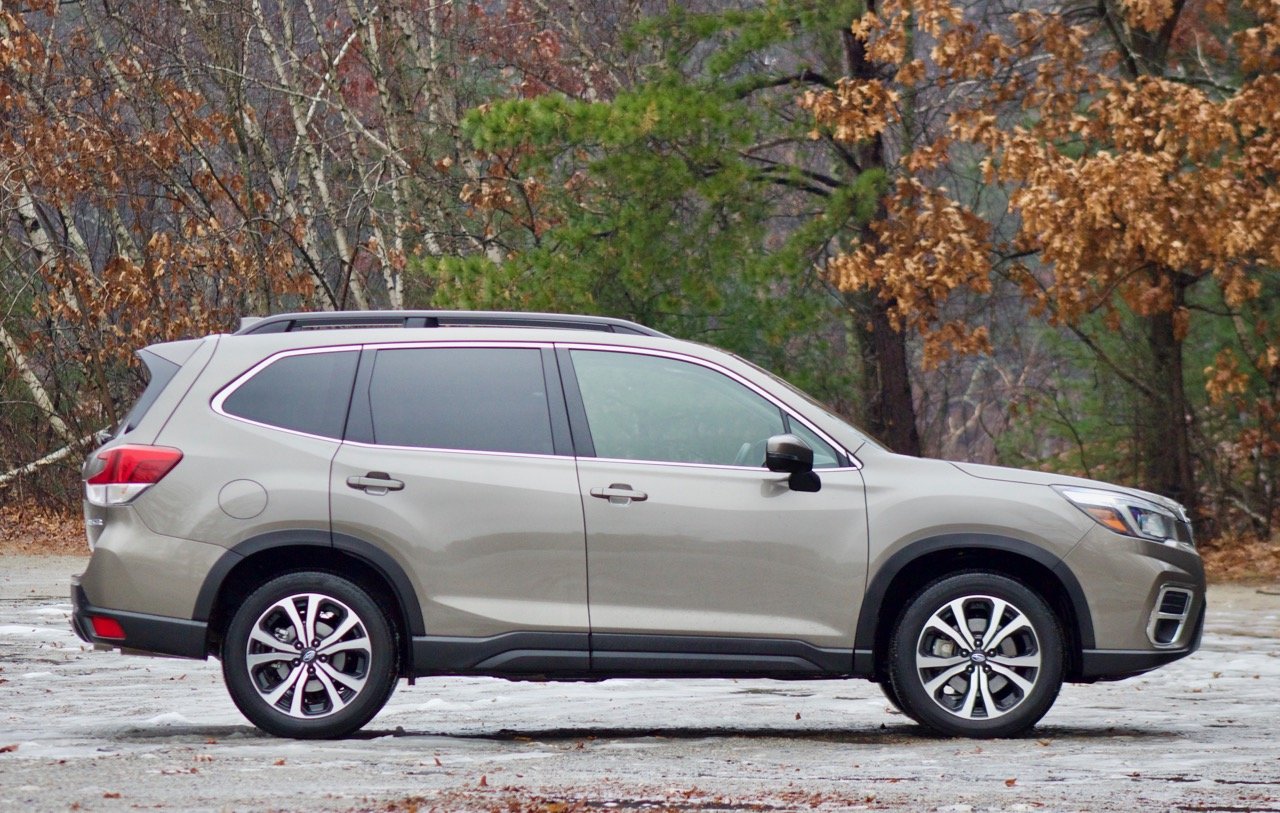 The rest of EyeSight’s driver-assistance features are incredibly helpful, and all come standard on every 2019 Forester. They include forward-collision warning, adaptive cruise control, lane-departure warning, and adaptive headlights. Every Forester also comes with lane-keeping Assist, which looks for the lane lines and provides small steering inputs to keep the vehicle centered in the lane.

Other standard safety features include a full array of front- and side-impact airbags and a reversing camera. All these high-tech systems together make for a very safe vehicle, and the Forester's great visibility ensures you can use your own two eyes to stay aware of hazards on the road as well. 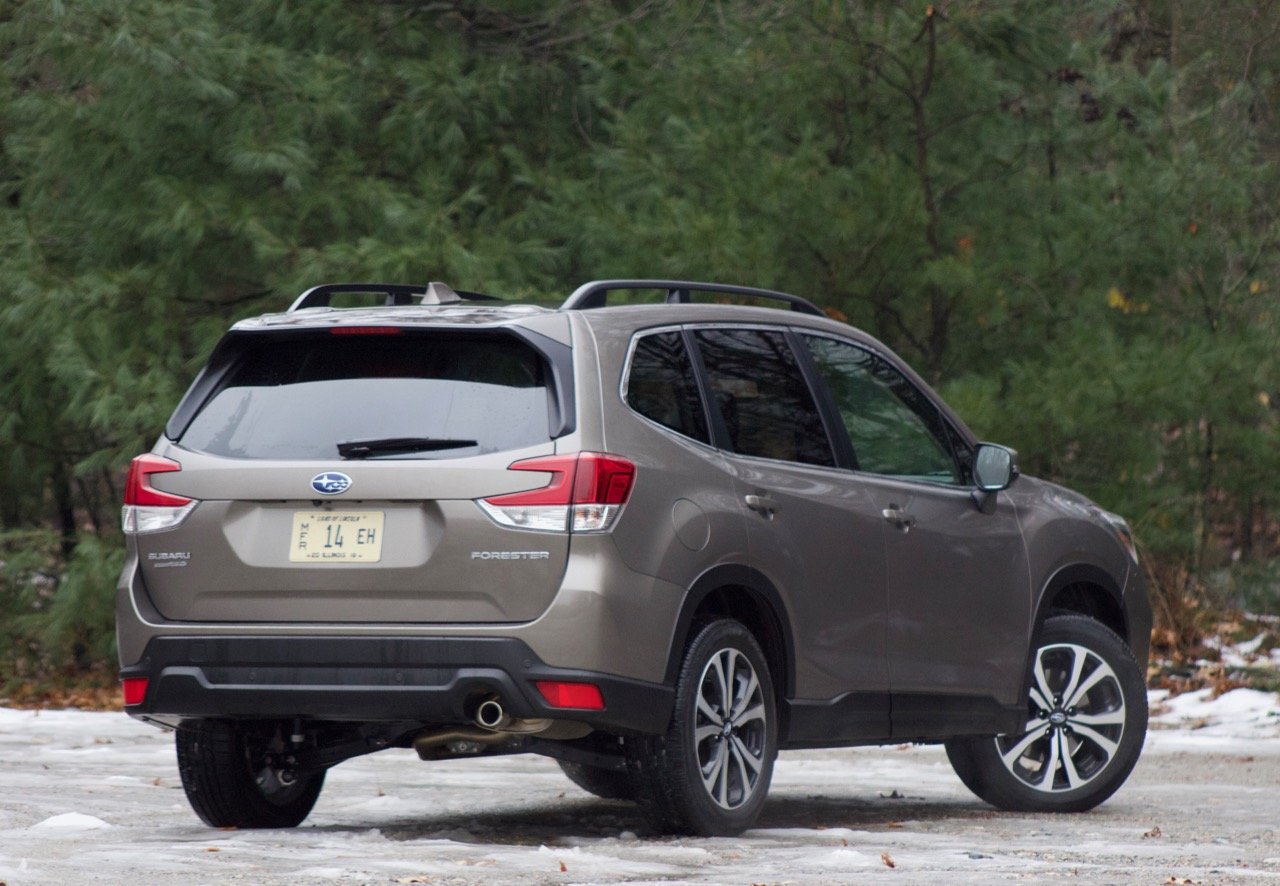 While its pricing is very much in line with the competition, the Forester gives you so much more at each price point. The AWD, the infotainment, the EyeSight system, and even the spacious cabin—they all make the Forester a fantastic value. Subaru has always marched to the beat of its own drum, and this Forester is no different. There might be options in the compact SUV segment with more performance or more luxury, but if utility and value are your top priorities, the Forester is the vehicular Swiss Army Knife you want.

What's your take on the 2019 Subaru Forester?

Goldengirl36 Can you tell me when the 2019 Forester will go on sale? Also, are all trim levels getting the new warning system that alerts the driver when they’re drowsy and/or falling asleep?

GuruTX9NJ With increased compression ratio, does it require premium fuel?

GuruC95CH I bought 2019 forester. For the money there is nothing out there that can touch it for value. Love the driving assist features.

Users ranked 2019 Subaru Forester against other cars which they drove/owned. Each ranking was based on 9 categories. Here is the summary of top rankings.

Have you driven a 2019 Subaru Forester?
Rank This Car

Has Anyone Had A Problem With Their Windshield Going Dark While Driving At ...

I have a 2019 Subaru Forester. At night the windshield gets so dark it is hard to see. The top part of the windsheild seems darker, then lowers down the windshield while driving. Very scary to dri...

When I turn off my 2019 Subaru Forester Sport, which is push button start, an audible tonal/ringing noise happens from under the hood. What is it? I just got the car a week ago and it has 8,000 mile...

My 2019 Forester Rear Gate Won't Open With The Inside Button Or The Key Fob...

The gate on my forester will not open with key fob or the inside button. How do I fix it?

Suhail asked a 2019 Subaru Forester 2.5i Premium AWD General question about a year ago

Forester 2019, the tailgate only locks with the lock button on the gate itself. Allother doors lock with the fob. Once the doors are unlocked, the only way to lock the tailgate is to open it and us...

2.5i Premier AWD with EyeSight Package