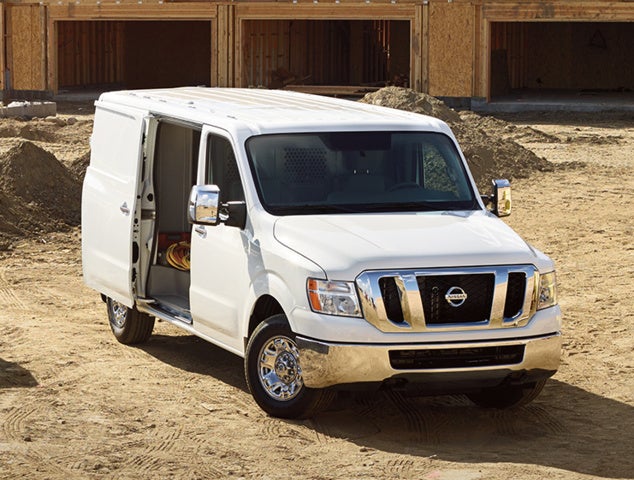 The venerable work van is integral to the successful operation of countless businesses across the country. Yet, General Motors, Ford, and Ram had been the only automakers to fulfill the need of such a work van. Nissan disrupted that long-held status quo when it entered the market in 2012 with the NV cargo van, a model that has maintained its simple utility since its debut. For 2019, the NV gains a new 7-inch display screen and expanded availability of an optional rear-door window package.

Like some of its competitors, the rear-wheel-drive (RWD) 2019 NV cargo van accommodates just two occupants, but it’s available in standard- and high-roof configurations. What the latter lacks in eye-pleasing proportions, it makes up for in versatility. All versions of the NV cargo van stay true to the work-van formula with standard steel wheels, a step-up rear bumper, and windowless side panels that serve as an ideal canvas for company graphics and logos.

In addition to two roof heights, the NV offers buyers the choice of 1500, 2500, or 3500 designation and S, SV, or SL trim level. All 1500 trims and some 2500s are equipped with Nissan’s 4.0-liter 6-cylinder engine that delivers 261 horsepower and 281 pound-feet of torque. With the help of a 5-speed automatic transmission, V6-equipped NVs can tow up to 6,900 pounds. That figure jumps to 9,400 pounds with an available 5.6-liter 8-cylinder engine, which makes 375 horsepower and 387 lb-feet. The V8 pairs with a 7-speed automatic transmission. EPA fuel-economy ratings are not available for either powertrain.

Lacking in some areas but promising utility and versatility in spades, the 2019 Nissan NV has arrived, ready to work.

Have you driven a 2019 Nissan NV Cargo?
Rank This Car