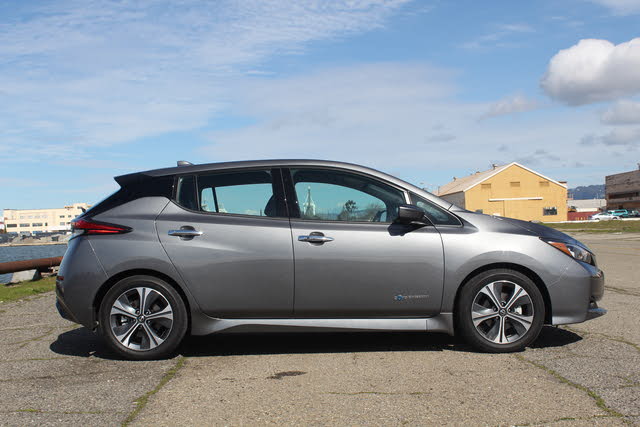 Looking for a New Nissan LEAF in your area?

Average user score
3 ⁄ 5 stars
Based on 5 reviews
Review by GuruR98P2 — Ride was smooth. Weather package had seat heaters and steering wheel which is great if you dont want to eat up your range by heating the car. The other base features didnt match up to the vet 2019 eg... Read More

The 2019 Nissan Leaf leverages new features and a more expensive set of trims with added range to help stay competitive in an ever-expanding field of electric cars. 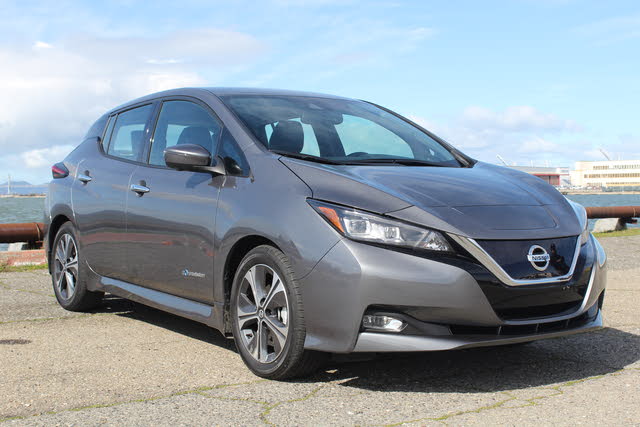 The Leaf is approaching its first full decade of being on sale, and during those years, it’s doubled its range, reduced its charge time, and put its speedometer in the right place. But in that same stretch of time, a whole new crop of electric competitors has also arrived, making the Leaf's previously impressive specs merely par for the electric course. For 2019, the Leaf gains Nissan’s new Rear Door Alert feature that will honk the horn if the vehicle senses you’ve left something in the rear seat after exiting the vehicle. And new for this year, the Nissan Leaf Plus trims will arrive with a 226-mile range, a more powerful motor, and a $5,500 premium over the Leaf’s base $30-grand starting MSRP. 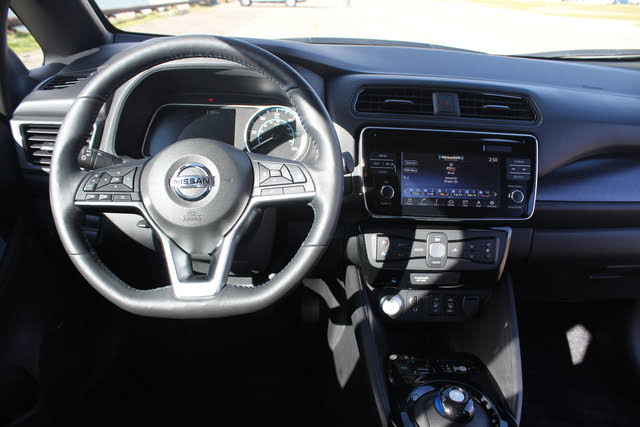 The original Leaf could travel barely more than 70 miles on a full charge. This year, every Leaf can do twice that and, with a Level 3 charger, replenish 90 miles of range in just 30 minutes. Back when I tested the previous-generation Leaf a couple of years ago, it could manage to muster only around 100 miles on a charge, and that was still more than enough for me during my week of testing, including taking a trip up to wine country for the day.

Now the Leaf is in its second generation, and a lot of the older car's weak points have been addressed. The speedometer lives within a traditional binnacle, rather than above it, and the new audio system is a big improvement with standard Android Auto and Apple CarPlay—as long as you don’t get the base S trim. The S trim also doesn’t come with a Level 3 charge pack. If you add it, you’re already within $1,000 of the SV trim, which gets you a lot of other upgrades like navigation and 17-inch alloys, so you might as well start there. Nissan offers standard automatic emergency braking across the lineup and standard adaptive cruise on all but the base S.

The big news is with the upcoming Leaf Plus trims and their extended range, faster and more powerful motor, and upgraded tech. My week with the Leaf was spent in a standard SL trim, which starts at $36,300. Major options and packages began and ended with the $650 SL Technology Package, which added ProPilot Assist for upgraded automatic emergency braking with pedestrian detection, an electronic parking brake, Nissan's Intelligent Lane Intervention, and high-beam assist. There were also charges for splash guards ($200), carpeted floor mats and cargo mats ($190), and a first-aid and emergency kit ($80). With an $895 destination charge, the final price came to $38,315 before federal or state rebates. 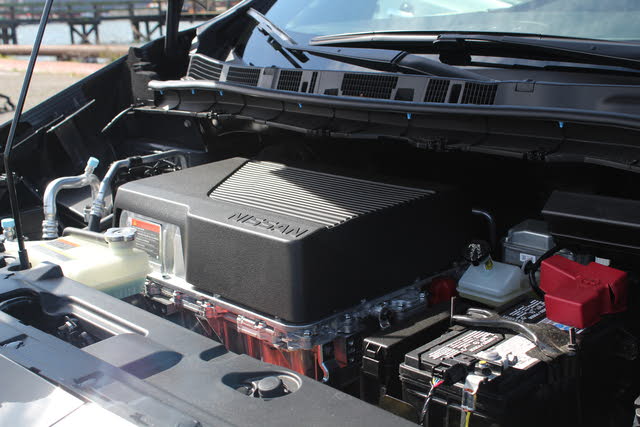 With an EPA-rated range of 150 miles, Nissan has equipped the Leaf to handle daily driving duty for commutes less than 2 hours each way. I’ve tested the Leaf twice now, and over the course of my last test week, I had more than enough juice to run it around town, do my errands every day, and do a full day’s worth of shooting without coming close to running out of energy. Had I needed a quick recharge, the Level 3 charger replaces 90 miles of range in just 30 minutes—quick enough to top off a nearly dead battery during a lunch break.

While the Leaf has never been a road warrior with regard to speed, it sprints from zero to 60 mph in roughly 7.5 seconds, which is plenty fast for most situations and a huge improvement over the first generation’s 10-second time. Plus, with that jolt of electric torque providing the power, it feels faster than those numbers would suggest. More impressive is the Leaf's “e-pedal,” which allows for 1-pedal driving. This has become an expected standard with electric vehicles, at least for this reviewer. If you lift off the accelerator slightly, the car will continue to coast while recuperating energy for the battery. Lifting further will induce engine braking that will actually bring the car to a stop. Nissan claims you’ll be able to avoid using the brake pedal altogether in 90% of stopping situations, and I can confirm that the car will indeed come to a complete stop without using the brake pedal—even on some of the very aggressive hills around the San Francisco Bay area. Over the course of the week, I had to use the brake for only the occasional panic stop.

If the idea of being restricted to 150 miles per charge doesn’t appeal to you, the Leaf's S Plus, SV Plus, and SL Plus trims should catch your interest. Their available 226-mile range does leave the Leaf Plus at a disadvantage to the Chevrolet Bolt’s 240 and the Hyundai Kona Electric’s 260, but only slightly. And the Leaf Plus also gets a performance advantage beyond range. While the regular Leaf’s motor offers the equivalent of 147 horsepower, the 160kW motor in the Plus offers the equivalent of 216 hp. Even better, the Plus’ electric motor spins faster, which means the top speed is 100 mph, as opposed to 93 in the regular Leaf (not that you should be reaching these speeds on public roads). And in case you’re worried about cargo space with the Plus' larger 62kWh battery pack, Nissan developed a new welding process that allows it to fit more battery modules into the same space, so cargo capacity won’t be affected. 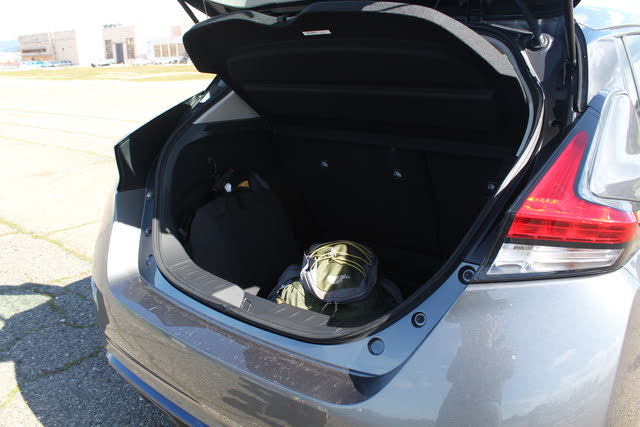 When the Leaf first came out, it was a visual outlier. Some people even called it an eyesore. Today, as the Leaf has evolved over the years, it looks like a lot of compact crossovers on the road, while competitors like the Bolt look a little funky. Whether you consider that a plus or a minus is completely personal preference. The one standout detail for me is the Leaf's gearshift lever—and not in a good way. I found it to be dangerously counterintuitive. If vehicle design encourages a false input even once, it’s not worth it. We’re talking about moving around a ton and a half of metal, after all.

The Leaf's driveability has definitely improved over the years. The 2019 Leaf has more power, plenty of driving range, and better steering feel than the first-generation vehicle. Its total range falls behind the competition's, but the Leaf offers more space than most with 23.6 cubic feet of storage in the trunk and 30 with the rear seats folded. That said, the rear seats don’t fold completely flat, and that will inhibit your use of all that space to a degree. You’ll also likely be left wanting more storage up front.

I wouldn't recommend the base S trim because of the omissions I mentioned previously, but chief amongst those is the lack of a standard Level 3 charge pack. This comes with the SV trim, and with it, any ideas of range anxiety should disappear completely. Your only concern will be in finding a charging station that isn’t already occupied. 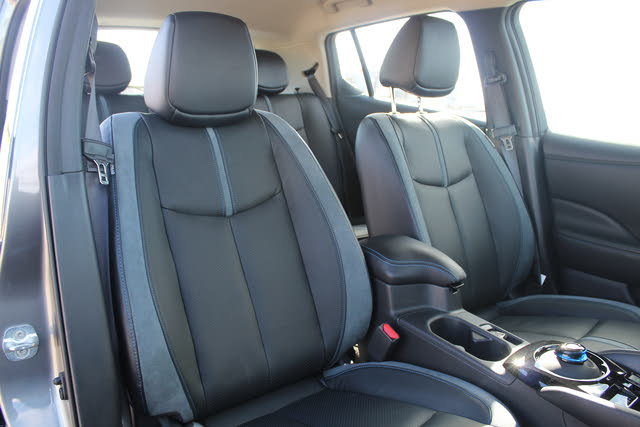 Avoiding the base S trim, the SV comes standard with Android Auto and Apple CarPlay, and the upgraded audio and infotainment features with this second generation are big improvements. The 7-inch touchscreen offers easily understandable menus with some helpful hard buttons for those who aren’t that savvy, and you get HD and satellite radio, plus real-time traffic for the navigation system. But a lack of USB ports in the cabin—my test car had only one—is very perplexing, especially in a car as tech-focused as the Leaf. This needs fixing.

The Plus trims offer some upgrades, however. The infotainment screen increases to 8 inches, and more importantly, they offer over-the-air updates, so you’ll always stay up to date. It seems a cruel omission that the same feature isn’t offered with the smaller screen, but I suppose Nissan needs to justify the Plus' price increase any way it can. 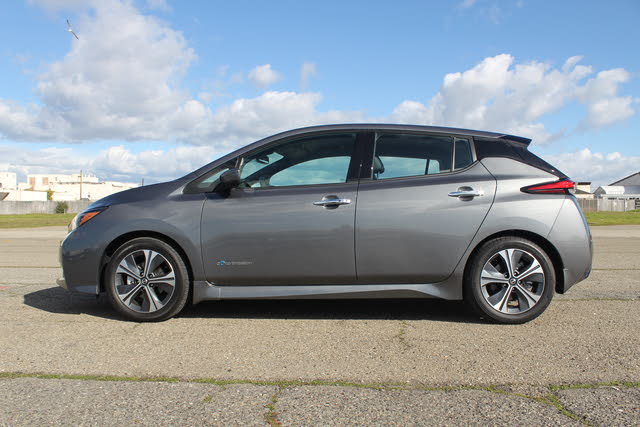 For me, what really gives the Leaf an advantage over the competition is Nissan’s ProPilot Assist. This is a low-level suite of semi-autonomous safety features that will steer, brake, and accelerate your car in single-lane situations—on the highway and in stop-and-go traffic. This isn’t a truly hands-free system like you’ll find on upper-level offerings, but it’s still a game-changer in heavy traffic, and it did a great job of reducing fatigue and frustration for me. It’s available on all Leaf trims except the base S, and it really stands out against much of the electric competition. The Bolt’s system isn’t as comprehensive, and the Kona offers similar tech only in its top trim. For me, that makes all the difference.

Sadly, braking lands the Leaf in the high-120-foot range for a 60-0-mph stopping distance, and that could be much, much better. Crash-test information from the government’s National Highway Traffic Safety Administration (NHTSA) is not available at this time, but the independent Insurance Institute for Highway Safety (IIHS) awarded the 2018 model top marks in its Moderate Overlap Front, Side, and Head Restraint and Seat tests. The Small Overlap Front test and the Roof Strength test have not been conducted for 2018 or 2019, and it should be noted that when they were last done for the previous-generation Leaf, the Roof test was awarded a top score of Good, but Small Overlap Front received a Poor rating, the IIHS’ worst score. 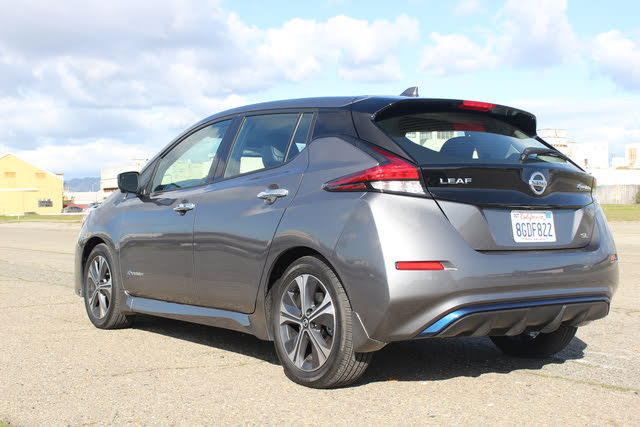 Here’s where the conversation changes. The Leaf has gone from the only player in the game to a distant runner up in a very short time. The Bolt will absolutely smash the regular Leaf's range, but it also costs about $7- or $8,000 more, has less cargo capacity, and offers much poorer interior materials, build quality, and fit and finish. That means you could hop up to a Leaf Plus for the extra $5,500 and still save quite a bit of money over the Bolt with only a slight range penalty. And that’s not even factoring in the available safety systems in the Leaf, which definitely outclass competitors like the Bolt and Kona. There are also federal rebates to consider, although that program seems to be in near-constant jeopardy these days. Overall, if you’re looking for an around-town runabout or a daily commuter, it’s hard to go wrong with the Leaf.

Susan Do you guys do poor credit in house financing?

Guru1XVDX I plan on living in the leaf where legal because housing in the USA is too expensive - Does Nissan or the federal government provide rebates or 108 month payment plans for this typical situation?

Have you driven a 2019 Nissan LEAF?
Rank This Car

Enter your zip to see incentives for a new LEAF in your area.

Why wouldn’t there be any price analysis for a new Nissan Leaf? Hundreds for sale in Northern California. Not a single price analysis.

Under maximum regenerative braking, do the brake lights come on?