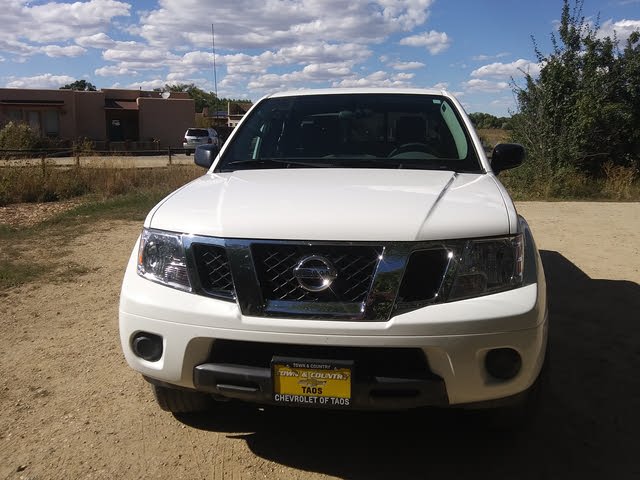 Average user score
4 ⁄ 5 stars
Based on 16 reviews
Review by GuruM72YD — I understand that Nissan used to be Datsun; they have been around longer than Toyota. The Nissan Frontier truck body and the engine has not changed much in many years. To me, that indicates Nissan ... Read more
Review by Guru1KCXN — It is exactly what I wanted. In the past this is the 8th Datsun/Nissan owned. By our family. I have no doubt it will exceed all of the previous ones, although this is the first one that is a truck. Read more
Review by Guru99QYMY — Lots of power. I`m 64 and there is ample room in front and back seats. Would like to see better gas milage. Looks better than any of the other small trucks. Read more

Introduced in 2004, the current Nissan Frontier pickup is among the older automotive designs on American roads. However, as the Frontier enters 2019, Nissan leaves it mostly unchanged. It’s still available in S, SV, Desert Runner, SL, and Pro-4X trims. Updates are limited to a new 7.0-inch color touchscreen for S and SV models and the Cayenne Red Metallic paint color is now available across more of the range. Last year, Nissan introduced a Midnight Edition Package, which includes gloss black exterior treatments on the rearview mirror as well as black gloss aluminum-alloy wheels. Body styles for the 2019 Frontier include an extended cab with a 6-foot bed or a four-door crew cab.

The base powertrain is a 2.5-liter four-cylinder engine coupled with a 6-speed manual. A 5-speed automatic is also available with the four-cylinder engine. It makes just 152 horsepower and 171 pound-feet of torque, and will tow up to 3,500 pounds. The more popular choice is the 4.0-liter V-6, which makes a much more usable 261 hp and 281 lb-ft of torque. It also comes with either a 6-speed manual or a 5-speed auto, and can tow up to 6,700 pounds. The four-cylinder saves at the pump, but isn’t spectacular. It has rated fuel economy figures of 19 mpg city, 23 highway, and 21 combined with the manual compared to 17, 22, and 19 with the automatic. The V-6 will manage just 16, 22, and 19 with the manual.

Like the more popular Toyota Tacoma and other small pickups, the Frontier is a fun and proven off-road tool with its part-time four-wheel drive. The Pro-4X comes with a locking rear differential. Both it and the Desert Runner model add special Bilstein shocks. The Pro-4X also features skid plates on the fuel tank, oil pan, and transfer case for when the going gets rough.

Given its price and its workhorse capability, the Frontier is fairly basic on the inside. Extended cab models have small and flat jump seats in the back, but even the proper seats in the crew cab models are utilitarian. Behind the seats, the bed is 63.3 inches in length on extended cabs and 59.5 inches on crew cabs.

Base S models get minimal equipment – even power locks and windows are optional. The SV makes those features standard, also adding alloy wheels and tinted windows. The SV is also available with a package that adds dual-zone climate control, a better stereo, leather-wrapped steering wheel, heated seats, and a spray-in bedliner. Stepping up to the SL model adds quite a bit to the price, but it also adds leather seats, navigation, and premium audio.

The off-road-oriented Pro-4X gets contrast stitching for the shift knob and steering wheel, chrome around the gauges, and an available package that adds special logos on the seats, power front seats, heated mirrors, moonroof, and roof rack.

The design of the Nissan Frontier predates most of the active safety features that drivers have become used to on new cars today, and Nissan hasn’t retrofitted any of them to the Frontier. Hill-start assist is the only safety feature to speak of other than optional parking sensors. In crash testing, the Insurance Institute for Highway Safety (IIHS) gave the Frontier its top Good scores in all tests with the exception of a Marginal rating for its small overlap test. The IIHS also gave the Frontier’s halogen headlights a poor rating.

While there isn’t anything fresh or exciting about the 2019 Frontier, it is also the cheapest small pickup on the market. For casual hauling and off-roading, a properly equipped Frontier is a great value for buyers who aren’t concerned with all the frills or having the latest and greatest.

What's your take on the 2019 Nissan Frontier?

GuruLLDPQ Absolutely!!! Best truck for the money in the world. F-150's are SHIT. FORD IS SHIT. PERIOD.

Have you driven a 2019 Nissan Frontier?
Rank This Car

How Do I Remove My Listing?

The vehicle I am interested in has been in a accident. Sometimes things don't get replaced or repaired properly. Should I have issues because of the previous accident, do you have a return policy or...