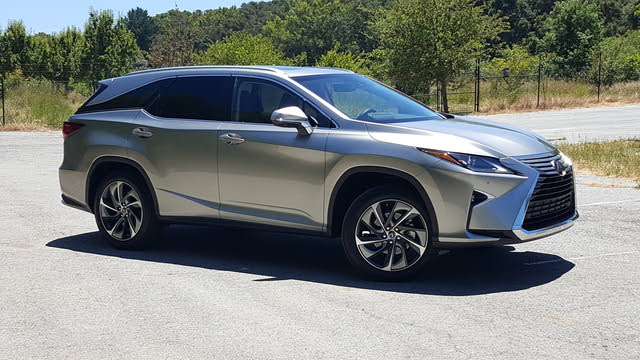 Lexus launched its first RX model in 1999, when the car-based crossover segment was still in its infancy. Since then, the RX has been through several iterations, including the current-generation version that debuted for 2016 and the introduction of a three-row L version in 2018. It's competing in a very popular segment, going up against the likes of the Acura MDX. For 2019, the Lexus RX carries over.

That 2016 overhaul transformed the Lexus RX’s appearance from understated to athletic and bold, thanks to more distinct body lines, sleek LED headlights, and a massive grille shared across the brand’s lineup. In keeping with the more contemporary styling, designers also incorporated standard 18-inch alloys, integrated dual exhaust outlets, and a body-color rear spoiler. Making an even more memorable impression is the RX 350 F Sport, distinguished by black mirror housings, a black honeycomb grille, and a set of unique 20-inch wheels. An optional Luxury Package offers, among other things, alloys dressed with colored inserts.

The RX draws motivation from a 3.5-liter 6-cylinder engine that delivers 295 horsepower and 268 pound-feet of torque to two or four wheels via an 8-speed automatic transmission. While one might expect the more aggressively styled F Sport to pack a stronger punch, Lexus engineers stopped short of adding any power-producing enhancements under the hood. The front-wheel-drive (FWD) RX 350 F Sport, along with the base RX 350, boasts the lineup’s best EPA rating: 20 mpg city, 27 highway, and 23 combined. As expected, opting for all-wheel drive (AWD) will require shelling out a few extra dollars at the pump. Expect 19, 26, and 22.

Inside, the 2019 RX is decked out with the usual assortment of niceties, such as 10-way power-adjustable front seats, push-button start, an auto-dimming rearview mirror, and dual-zone automatic climate control. The 350L uses a power third-row seat to increase seating capacity to seven, and is further distinguished from the 5-passenger RX 350 with standard leather upholstery, triple-zone automatic climate control, and various memory settings. With the F Sport comes heated and ventilated front bucket seats, steering-wheel-mounted paddle shifters, aluminum trim, and a G-force meter for those times when the RX is being hustled along a curvy back road. The options list includes genuine wood accents, a head-up display (HUD), heated front and second-row seats, a panoramic moonroof, and a sensor-activated power liftgate.

In terms of infotainment, the 2019 Lexus RX is equipped with a standard 8-inch touchscreen that can simultaneously display different functions, such as audio and climate controls. Advanced voice recognition is also included, as is a 9-speaker sound system and Lexus Enform Connect, which grants users access to a host of additional apps and a multitude of Lexus services. Depending on their needs, RX owners can use Enform to transform their vehicle into a mobile Wi-Fi hotspot. A more traditional navigation system is also offered, featuring a 12.3-inch screen, touch-pad control, and satellite radio. Unfortunately, Apple Carplay and Android Auto are not available.

Crash tests have not been conducted on the 2019 Lexus RX 350 or 350L, but the 2018 model earned a Top Safety Pick award from the Insurance Institute for Highway Safety (IIHS). Results from National Highway Traffic Safety Administration (NHTSA) were nearly as impressive, with a 5-star rating going to the AWD RX 350 and a 4-star rating to both RX 350L versions as well as the FWD RX 350.

Pairing style with luxury, the Lexus RX remains a leader amongst the ever-growing selection of midsize crossovers.

Vin is from Canada dealership is the factory warranty good in the US??