For 2019, Jeep puts a new face on the capable and comfortable Cherokee and backs it up with new features and a turbocharged engine.

The Jeep Cherokee, in its various forms, is not like the rest of the compact crossover set. While most rivals offer rugged, capable vehicles, the Cherokee delivers more. Its 4-wheel-drive and terrain-management systems are proven, and the Cherokee’s Trailhawk trim is the only small SUV that can actually hang off-road with the likes of the iconic Jeep Wrangler.

This capability puts it at a unique crossroads—it provides Jeep shoppers with a pretty capable SUV, but one that's more affordable than the Grand Cherokee. The Trailhawk also offers Wrangler buyers a potential alternative with better on-road manners.

Add to this that the Cherokee has been redesigned for 2019. Are the looks enough to make compact SUV buyers flock to it? And is the Trailhawk capable enough to make a Jeep shopper consider a Cherokee over the Wrangler? 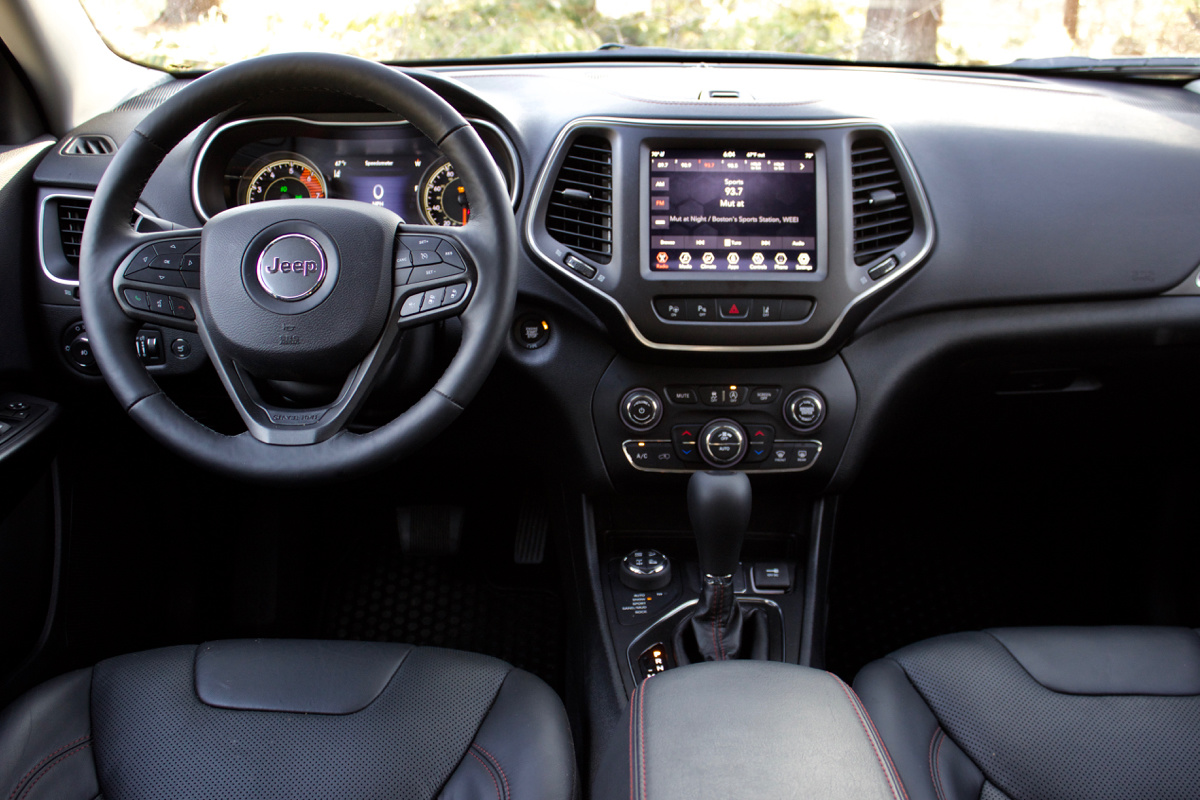 Let’s address the elephant in the room. The styling of the previous Cherokee could generously be described as… polarizing. Rumor has it the “KL” generation of the Cherokee was originally supposed to be a Fiat, but it was brought into Jeep’s stable as a result of the Fiat Chrysler Automobiles merger. When you look at the Fiat 500L, 500X, and even the overseas Fiat Panda, it gives credence to that rumor.

Just as importantly, Jeep designers had to work with a spiritual predecessor that looked like a box on wheels—a beloved box on wheels, but still, not ideal for car design in the 21st Century. With that in mind, it's fair that Jeep took the clean-slate approach to design when introducing the Cherokee in 2013. When it debuted, the Cherokee didn’t look like anything else on the road, and it eventually grew on many buyers.

Thankfully, the new front-end design is far more conventional. It swaps out the isolated daytime running lights and headlights that look like fog lights for a typical, headlight-above/fog-light-below configuration.

As for the dash and cabin area, not much changed for 2019, which is smart—Jeep knows not to mess with a good thing. The Cherokee’s dash feels like that of a downsized Grand Cherokee, with a sensible, logical control layout. The inside of the Cherokee blends form and function, with plenty of cubbies and compartments right where you want them. This is a design that works very well for everyday life.

Trims for the Cherokee are Latitude, Latitude Plus, Limited, Trailhawk, Overland, and Trailhawk Elite. Standard equipment on the Latitude includes a 7-inch touchscreen running the latest version of the Uconnect infotainment system, which supports Apple CarPlay and Android Auto. It also includes a standard USB port, a 12-volt outlet in the trunk, Bluetooth connectivity, and a 3.5-inch thin-film-transistor information screen between the gauges.

Buyers can opt for the Latitude Plus, which swaps out the base steel wheels for 17-inch aluminum ones and swaps out the base cloth seats for premium vinyl (I guess you could call it “pleather”). It also adds an 8-way power driver's seat, SiriusXM satellite radio, an additional USB port in the center console, and remote keyless entry with push-button start. The Latitude Plus mostly opens itself up to various options packages that are not available to the Latitude trim.

If you're going for luxury, the Overland trim is the way to go. It boasts plenty of added chrome, a unique lower front fascia, and 19-inch polished aluminum wheels. It also comes standard with the hands-free power liftgate, a tonneau cover for the rear cargo area, upgraded Nappa leather, and heated and ventilated front seats.

The Trailhawk trim adds an off-road suspension that provides an additional inch of ground clearance. It has a distinct look, with dark wheels, accents, and grill—pretty much anywhere that was chrome on the Limited or Overland is black on the Trailhawk. The dark hood is designed to reduce glare, which is important while cresting a hill. The final pieces are the red tow hooks—this is a detail that could easily look ridiculous, but works quite well. The Trailhawk is also the only Cherokee available in Pearl White, Firecracker Red, and the fantastic color of this vehicle: Hydro Blue. These colors all work very well with the black accents, making for an aggressive-looking SUV. 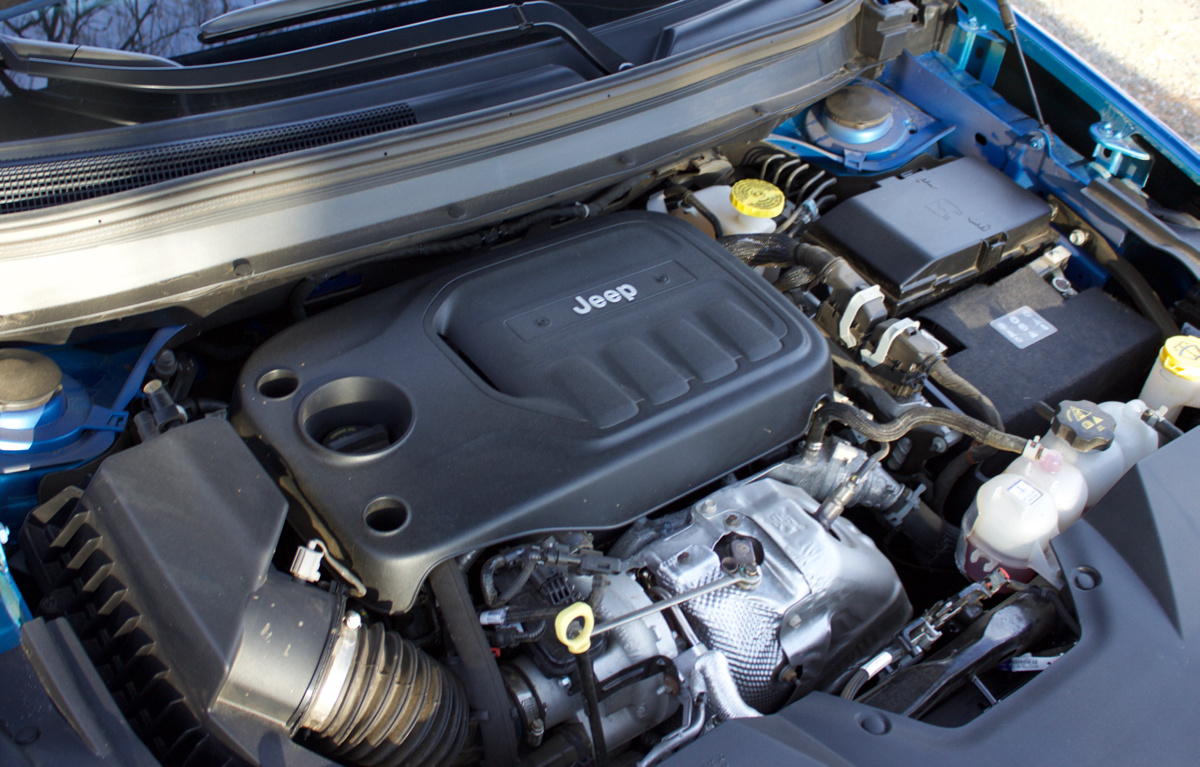 A new engine joins the lineup for 2019, but first, the carryovers. The base 2.4-liter 4-cylinder engine makes just 180 horsepower and 171 pound-feet of torque, and it's standard on the Latitude, Latitude Plus, and the front-wheel-drive (FWD) version of the Limited.

The 4-wheel-drive (4WD) Limited, Overland, and Trailhawk all come standard with the trusty and stout 3.2-liter V6, which makes 271 horsepower and 239 pound-feet of torque. This engine is optional on all lesser trims.

Our test model featured the new-for-2019 turbocharged 2.0-liter 4-cylinder. It has stop-start capability and makes an impressive 270 horsepower and 295 pound-feet of torque. This engine is optional across the lineup, but not available on the base Latitude.

A 9-speed automatic transmission is standard across the lineup, routing power to the front wheels or all four, which can be further divided into several available 4-wheel-drive systems.

Drivers can toggle through various drivetrain setups with the Terrain Management System dial, which is down by the shifter. In most versions of the Cherokee, it has Auto, Snow, Sport, and Sand and Mud. Opting for the Trailhawk adds a Rock mode and a button to lock the rear differential.

As fantastic as these features are for the trail, most drivers will spend a majority of the time on roads. On roads and highways, the base 4-cylinder is underwhelming, and the V6 is great, but we knew that. What about the new turbocharged engine? It turns out to provide solid acceleration in low-to-mid-speed settings, but it's quite noisy, and it makes quite a racket when getting up to speed.

In most on-road settings, the Cherokee does a great job soaking up bumps and combining that with composed, responsive cornering. The Trailhawk’s beefed-up suspension takes things a step farther, absorbing the worst conditions possible, including big potholes. That makes this a terrific SUV for New England roads.

When it comes to hitting the trail, any vehicle with Active Drive II will be quite capable, but it's the Trailhawk that manages great capability without feeling as rough as a Wrangler.

Although you're able to climb up and down trails, you don’t feel as connected to the ground as you would in the more traditional Wrangler. The Cherokee’s crawl control systems are more akin to cruise control for the trail. Rather than a direct driveline and using low-range gearing (like in the Wrangler), the crawl control automatically modulates the ABS to crawl along. You can get up or down tough trails, but it’s a completely different feeling than some off-roaders will expect.

The most efficient variant of the 2019 Cherokee will feature the new turbo engine with FWD. It should return fuel economy of 23 miles per gallon city, 31 highway, 26 combined. As one might imagine, the Trailhawk has the worst fuel economy of the bunch, returning just 18 city, 24 highway, 21 combined.

The turbo engine in the Trailhawk does a bit better at 20 miles per gallon city, 26 highway, 22 combined, although it requires premium fuel. In our week of driving the turbo Trailhawk, we observed combined fuel economy of 21 miles per gallon. 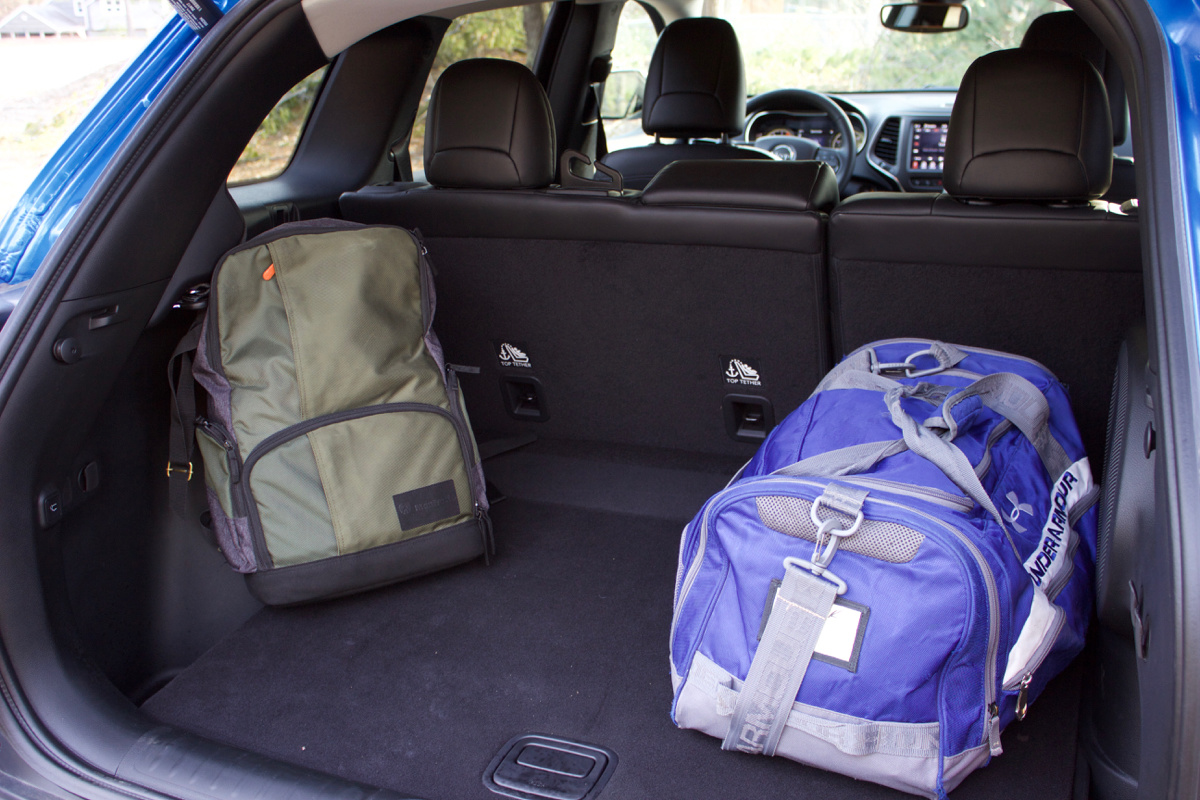 As stated earlier, the control layout is highly functional—and carried over from last year. This layout is shared with other models and ideal for being able to reach down to change a control without looking while on the road. There are also plenty of storage solutions within the driver's reach, including deep pockets in the front doors, a helpful tray by the shifter, and a deep center console.

Out back, the Cherokee adds a hands-free power liftgate as an option for 2019. This is great for when your hands are full of gear and you don’t want to put it down to dig out your keys. It should be pointed out that these systems are new, and the sensor did not always pick up our foot while attempting to use it.

And once you open that hatch, the Cherokee’s available cargo space is not that impressive. Jeep claims it made some adjustments to improve cargo space, but from what we can tell, it has just 25 cubic feet of cargo space, and 54 when you drop the rear seat. Those numbers are subpar for the compact crossover class. The class leader is the Honda CR-V, and it has 37 cubic feet for cargo, or 75 with the rear seats folded. 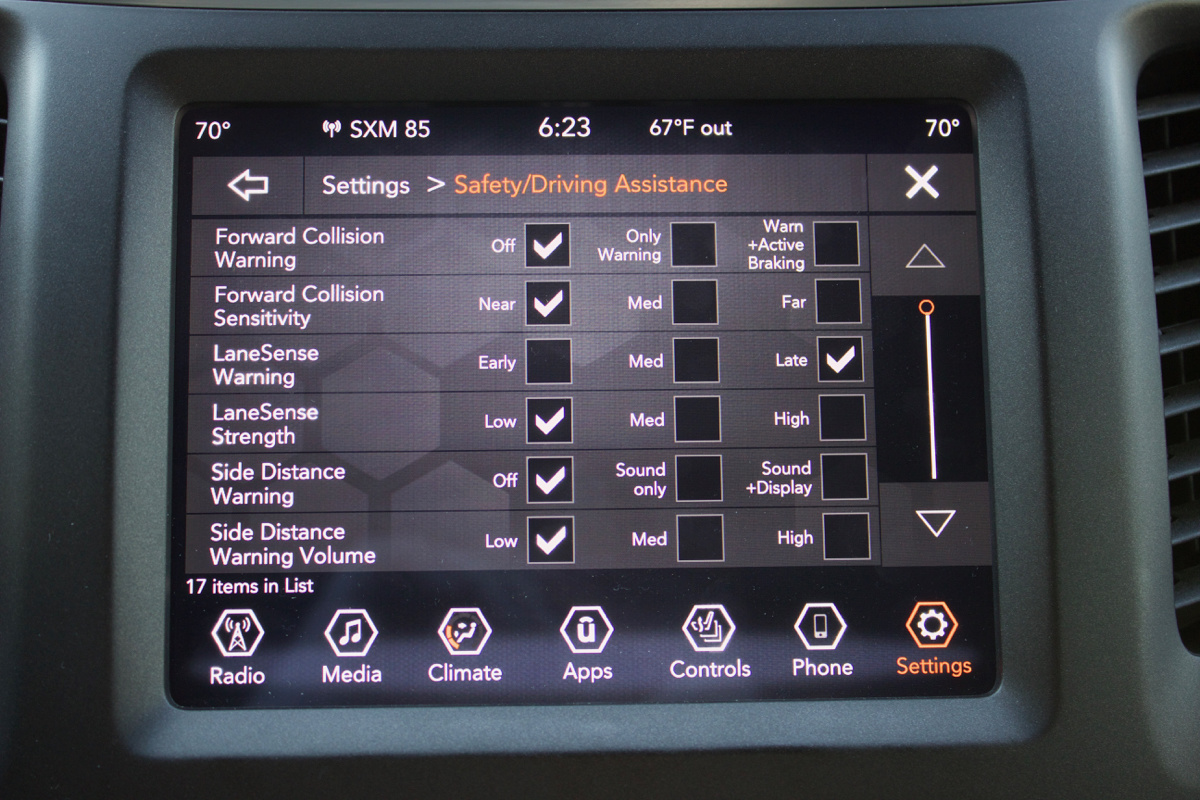 For 2019, Jeep makes the 7-inch Uconnect touchscreen, which includes Apple CarPlay and Android Auto, standard equipment in the Cherokee. This 7-inch screen appears only in the Latitude and Latitude Plus—all other versions come with the larger 8.3-inch Uconnect system. Both systems feature the latest version of Uconnect, which has been updated, and the new fourth-generation system features crisper, sharper graphics, improved responsiveness, and pinch-to-zoom on the available navigation system.

The touchscreen menu features a great layout, with dock buttons on the bottom of the screen for major features like radio, media, controls, navigation, phone, and more. Many screens are customizable, and you can even drag and drop items as you see fit.

There might be automakers doing some really unique things, like wireless charging and gesture control, but at the end of the day, we just want the basics to work. Uconnect continues to set the standard for a user interface to an infotainment system. 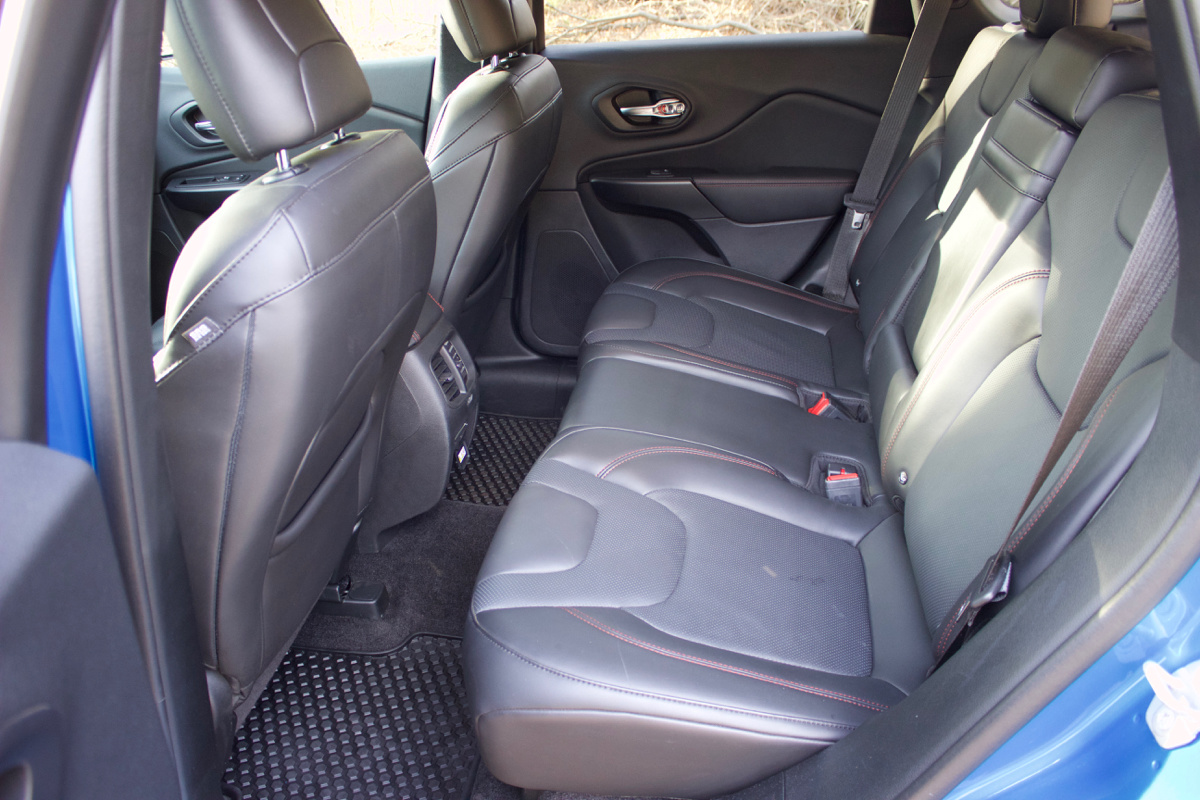 Plenty of safety and driver-assistance features are available on the Cherokee. The Latitude and Latitude Plus are available with the SafetyTec Group, which adds blind-spot monitoring, rear cross-path detection, and rear parking sensors.

A Technology Group is optional on the Limited, Overland, and Trailhawk. It adds forward-collision avoidance and mitigation, lane-departure warning, automatic high beams, automatic rain-sensing wipers, and adaptive cruise control. This package also provides a self-parking feature that works for both parallel and perpendicular spots. 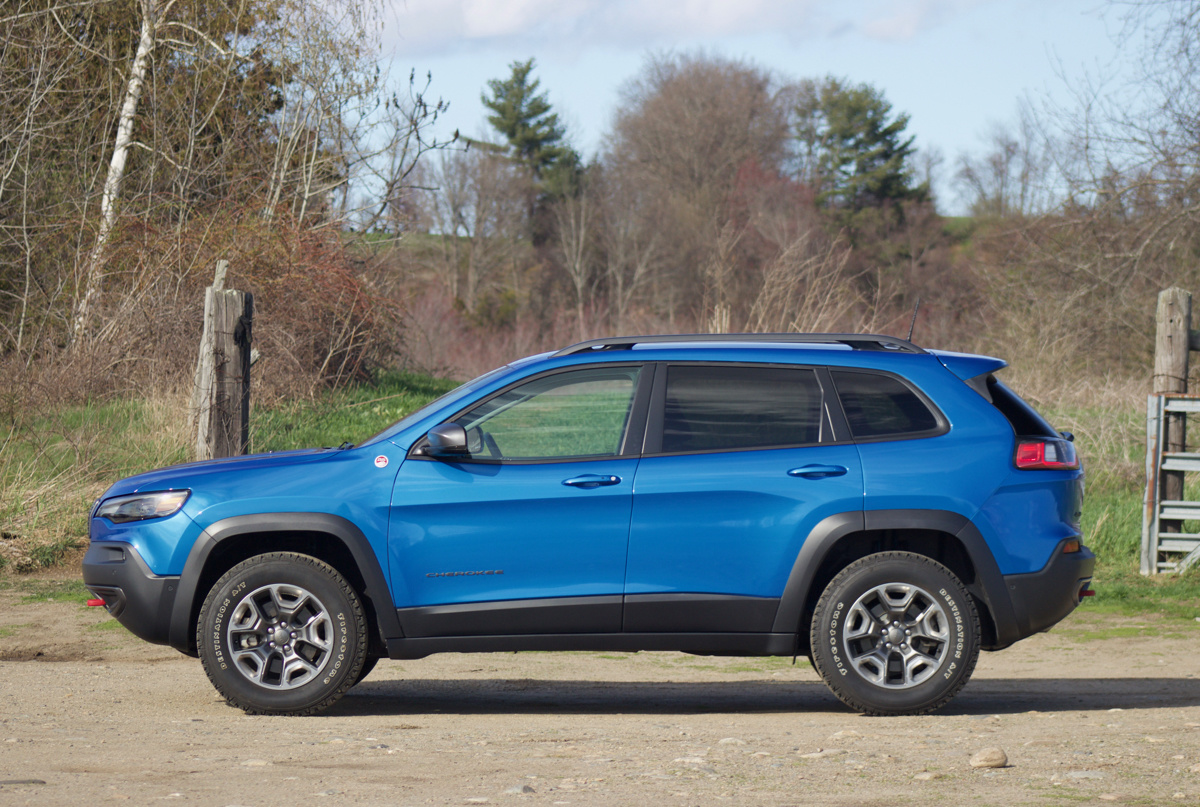 These prices are on the more expensive side of the compact SUV spectrum, but there’s a reason for that—the Cherokee can do things those other vehicles can’t do and go places most compact SUVs can’t.

The mere fact that the Cherokee Trailhawk can hang with a base Wrangler on many trails speaks to how capable this small SUV really is. But if we’re to judge the Cherokee on 4WD capability alone, that would discount its credentials in everyday usability. It now boasts features like the latest Uconnect system and the updated hands-free liftgate to make it a sensible—and capable—crossover for everyday life.

Shannonga32 I love my 2019 Jeep Cherokee Limited. Rides smoothly, has every option I could want and what a quiet ride! I am more happy with this purchase than any other vehicle I have owned! Recommend it highly!

Have you driven a 2019 Jeep Cherokee?
Rank This Car

I started vehicle this morning to find a a vertical rectangular white block in the middle of the media screen, it then turned black. It prohibits viewing of the entire screen nothing in owners manu...

My 2019 Jeep Latitude power steering went out . It is a push to start vehicle. All lights work and so does the radio and horn. But it just won’t start. Then it will say vehicle warming . It sat fo...

Which Other Vehicle Is Interchangable With A 2019 Jeep Cherokee?

Which other vehicle is interchangable with a 2019 Jeep Cherokee Limited 2.0

Where Is The Separate Auto Stop/start Battery Located On A 2019 Jeep Cherok...

Does anyone know where the separate auto/stop battery is located on a 2019 jeep Cherokee Latitude 4X4? My 5 month old jeep won't start and jumping it didn't work. Nothing happens, no clicking or nois...

How Do Sell My Car That Isn’t Paid Off Yet?