Plush and pricey, this old-school luxury SUV has a few tricks—but not many. 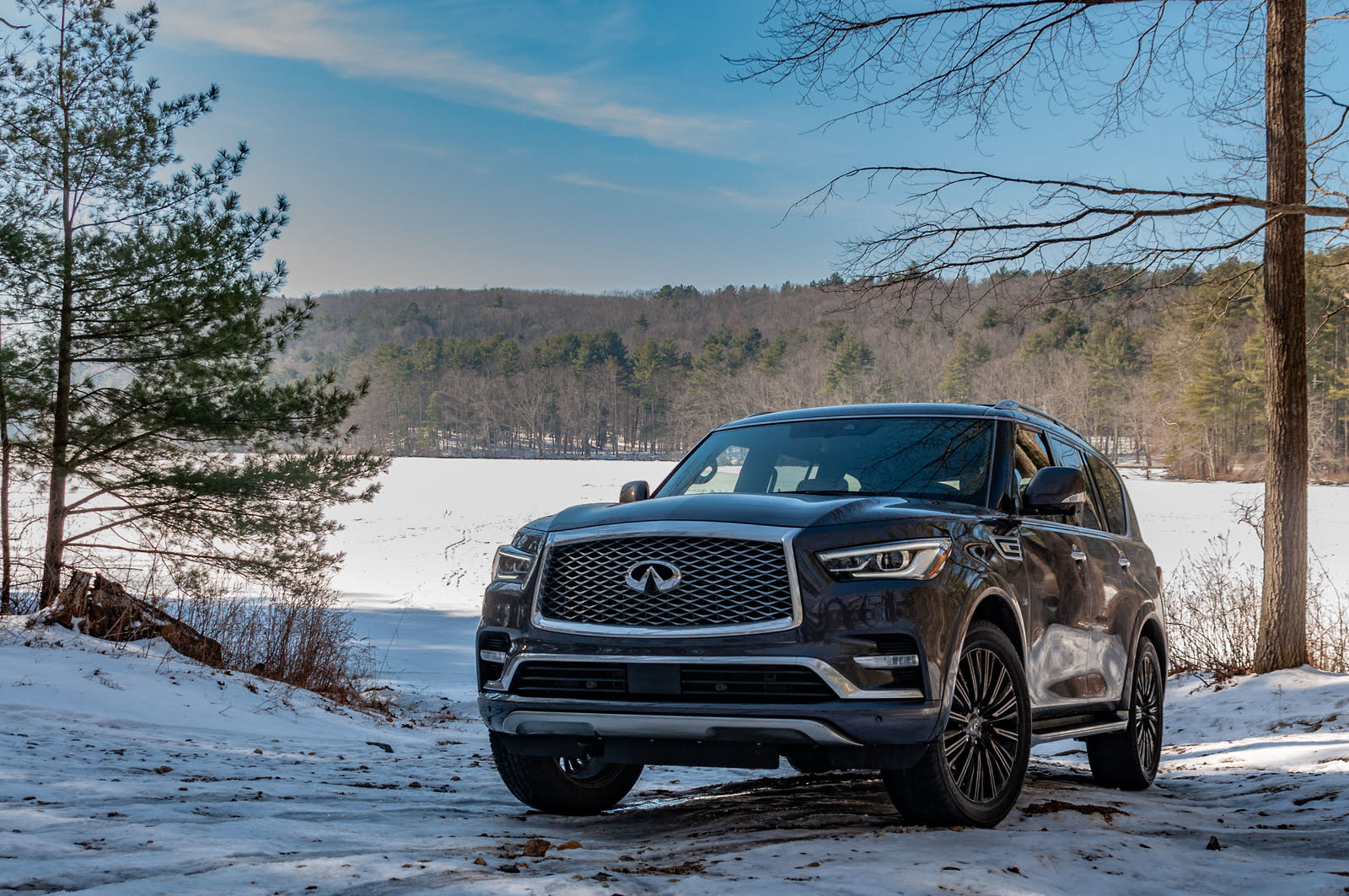 Maybe you’re considering a giant SUV with a fancy badge. If so, you presumably enjoy an unlimited gas budget. You’ve peeked at the Cadillac Escalade, Range Rover, and Mercedes-Benz GLS, and maybe the brand new Lincoln Navigator and BMW X7.

The QX80 is anything but new. Yet, unlike the equally old Lexus LX 570, it still moves off the shelves in decent numbers. This model hasn’t seen a major overhaul since it arrived as the QX56, its previous name, in 2010. Renamed and refreshed for 2015, and refreshed a second time for 2018, the QX80 enters 2019 as a more lavish—and pricier—vehicle. Can this Infiniti SUV stand a chance? 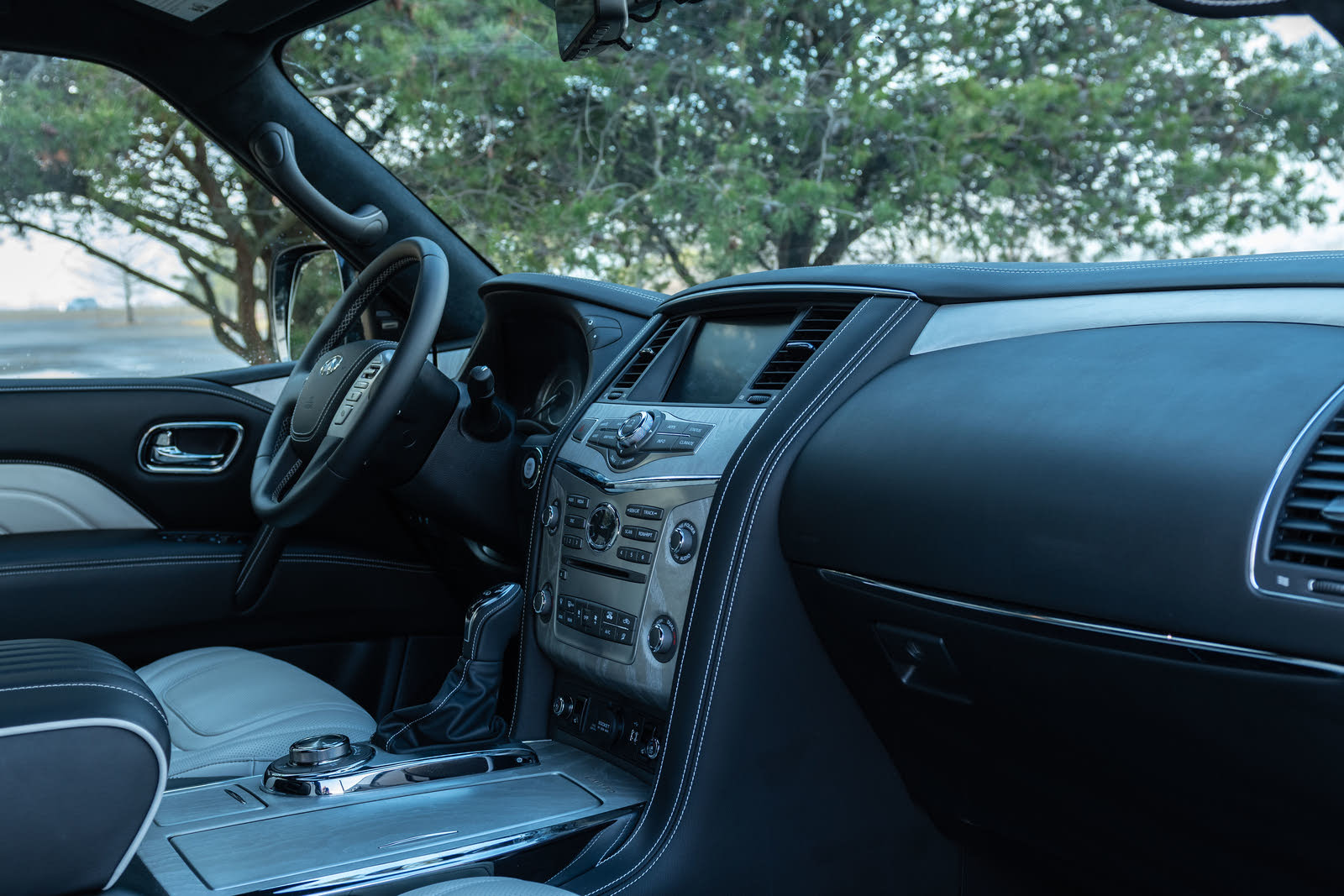 Infiniti restyled the QX80’s front end for 2018 to mirror more plebian rides like the QX50 compact crossover and the Q60 coupe. But the QX80 is Infiniti’s flagship, and despite its age, it still looks the part. Although it's based on the Nissan Armada, which we last tested in 2018, the QX80’s nose is more elegant. Slim, slanted LED headlights flank a curved rectangular grille set in a classic crosshatch pattern. The hood and front bumper have some sensuous curves that offset the upright, boxy profile that starts immediately behind the windshield. The rear-quarter glass, along with similarly shaped LED taillights connected by a thin chrome strip, help to break up the body’s chunkiness. But the QX80 doesn’t shelter its big-rig persona, as evidenced by standard 20-inch wheels, tall side mirrors, and a roof that towers above normal-size people. My only peeve is the set of turn signals on the bulging rear bumper. They're cheap incandescent bulbs and should be integrated into the taillight clusters.

I tested the Limited, a new-for-2019 trim that brings two-tone 22-inch rims, a unique grey metallic paint, stainless steel running boards, and a special black-and-white interior. That color combo introduces black and white leather surfaces, microsuede inserts, and wavy stitching all over the seats. More soft, padded leather covers the steering wheel, doors, dash, center stack, floor-mat edges, and all the grab handles. The roof is covered in microsuede. White and black contrast stitching, white piping on the front and second-row central armrests, and light gray ash wood complete the special effects. Infiniti offers several enticing color choices for the QX80, but the Limited feels the richest. From a quality and assembly standpoint, the QX80’s interior is top-notch, save for the doors. They’re thin-sounding and not well insulated. In freezing conditions, they leaked too much cold air at my feet. 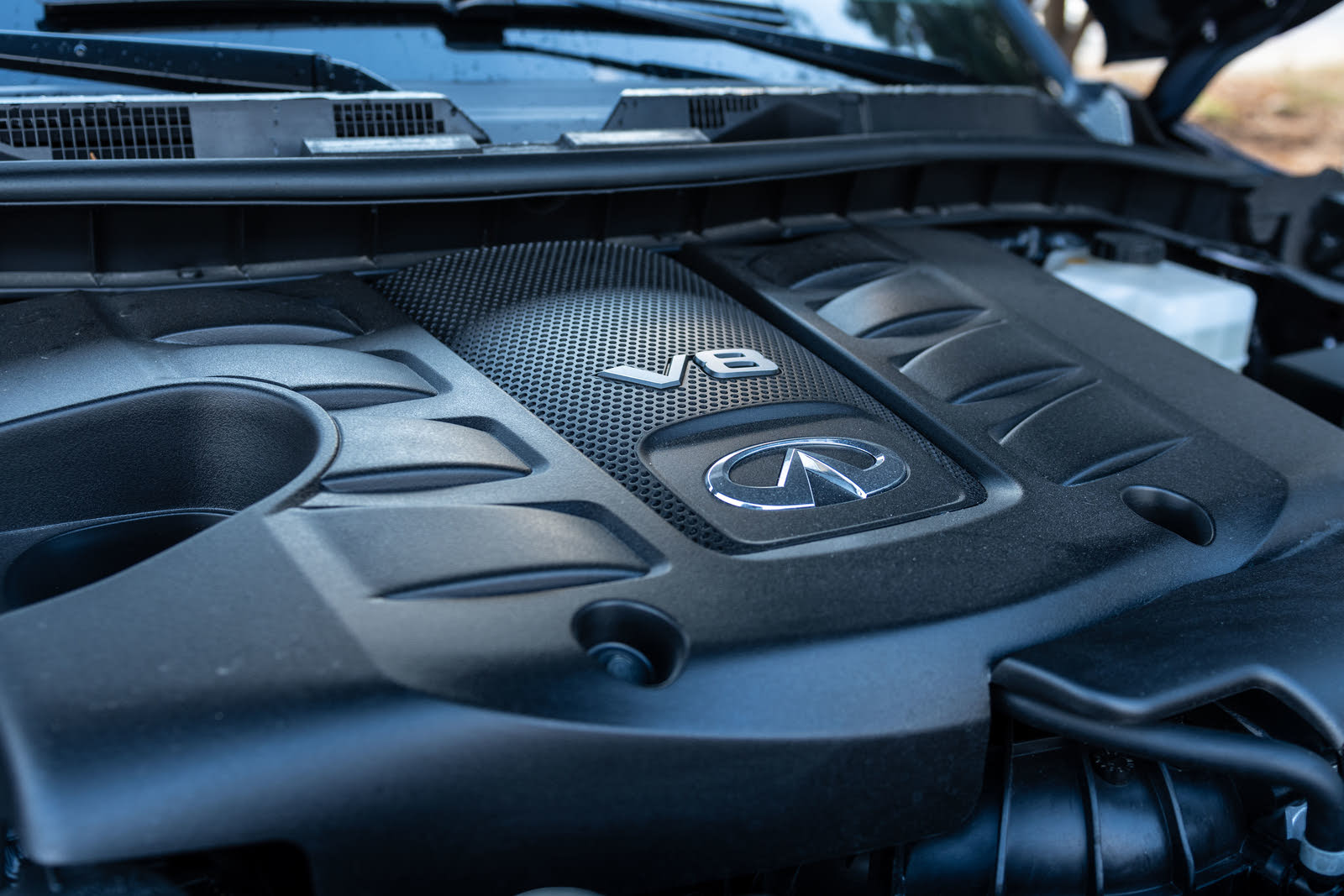 Many large SUVs still use the rugged construction of a body-on-frame chassis because it allows them to tow like champs. The QX80’s 8,500-pound tow rating is more than anything in its class. It’s many hundreds more than unibodies like the Mercedes GLS and BMW X7, and it’s 1,500 pounds above the body-on-frame Lexus LX 570. Even the Escalade can’t touch it. For people with big boats, horses, or a forest of trees to clear, that’s a significant advantage. I didn’t have the opportunity to haul anything but a few adults, yet all of us—more than three tons of steel, iron, and flesh—were easy pickings for the QX80’s 5.6-liter V8. Naturally aspirated and delightfully loud, this engine couldn't care less what’s inside or behind the truck. With 400 horsepower, 413 pound-feet of torque, and 7 gears—plus a low-range transfer case—the QX80 rushes to the kind of speeds that become unsafe in a top-heavy SUV prone to rollovers and crosswinds. The 7-speed automatic is quick to shift, even without a Sport mode or steering-wheel paddles, and can rev-match downshifts like a sports car. The steering is light, yet not wobbly like an LX 570's, which required constant corrections on the highway. The QX80 is remarkably easy to place in the lane.

Rear-wheel drive (RWD) is standard on the QX80 Luxe trim. Selectable 4-wheel drive (4WD) is optional on the Luxe and standard on the Limited. That system can automatically route power to either the front or rear. Or, upon twisting the central-console dial, it will lock the split 50/50 in High or Low range. Snow and Tow modes aid with the throttle and torque application in those conditions.

While this setup can’t match the off-road extremes of an LX 570 or Range Rover with their locking differentials and adjustable-height suspensions, the QX80 has some on-road tricks. First, the QX80 features a fully independent suspension instead of a solid-axle setup. Unlike an SUV with anti-roll bars, a QX80 equipped with Hydraulic Body Motion Control can better adapt to fast corners and rough surfaces. These aren't traditional dampers that vary their stiffness by electronic valves, nor are they air springs. Each damper’s hydraulic chamber is interconnected by a cross-linked series of pipes, so that compression and rebound motions from one damper can instantly counteract the motions from an adjacent or opposite damper. Only McLaren, the supercar maker, has a comparable suspension system. It works, mostly. The ride is controlled, and the QX80 doesn’t stumble into turns, but three tons and a high center of gravity are omnipresent. Over rough road patches, the QX80 will still shake in protest.

Fuel economy is traditional, in that it’s terrible. I averaged 15 mpg over 580 miles of mostly highway driving. The EPA rates the QX80 at 13 mpg city, 19 highway, 15 combined with 4WD (and 14/20/16 with RWD). Other competitors gulp, too, but not at the rate of this giant Infiniti. 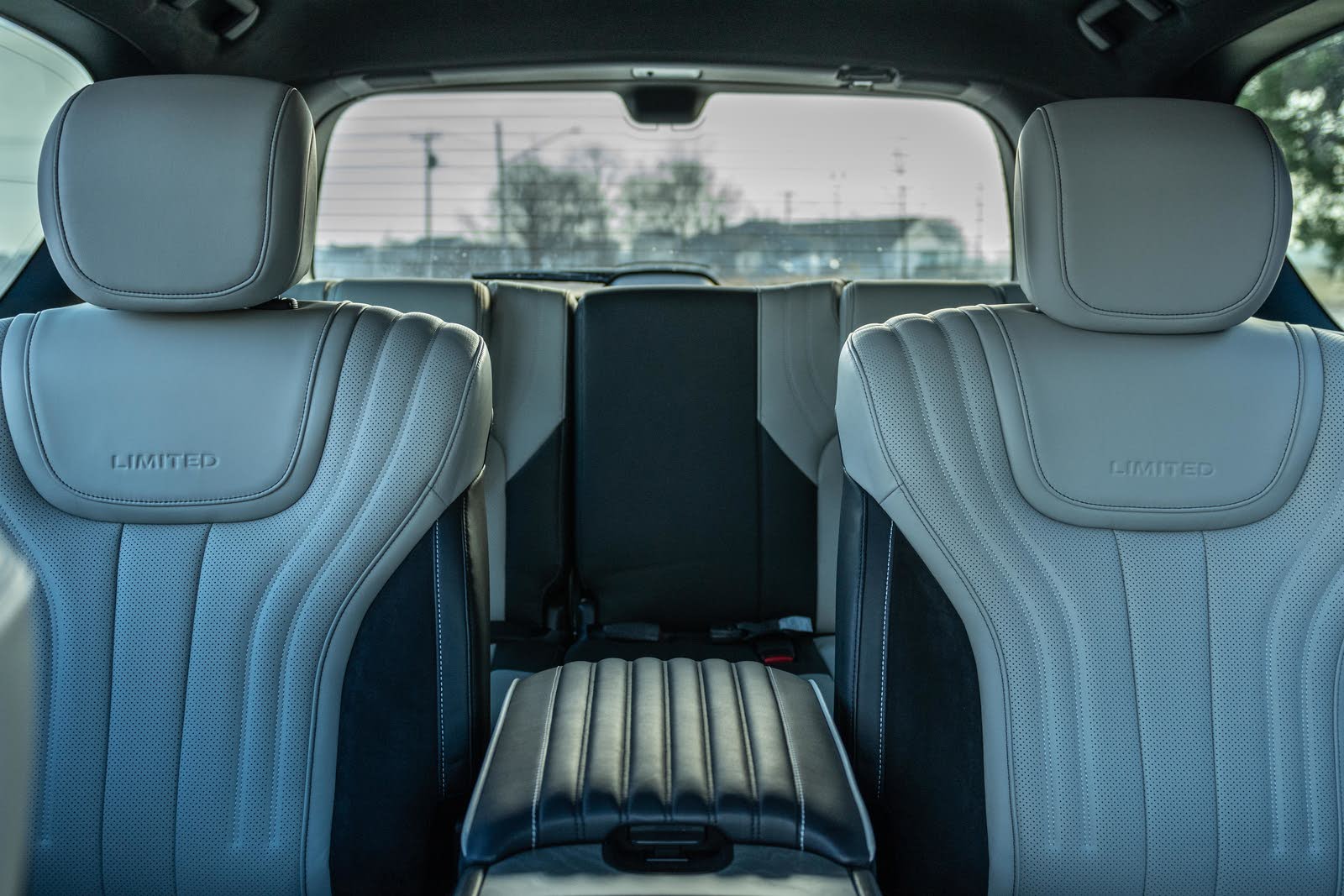 Seven-passenger seating with second-row captain’s chairs is standard, as are power-reclining and folding third-row seats. A second-row bench that allows for 8 passengers is a $250 option. I prefer the captain’s chairs, which are just as luxuriously appointed and comfy as those in front. They tip forward to make third-row access easier, and Infiniti offers an option to handle this with the flick of two switches on the center stack. I enjoyed using this feature, but watch out: Those seats will crush anything in their path.

With all seats flat, the QX80 swallows 95.1 cubic feet of cargo (the Navigator is larger still, with 103.4 cubic feet) or 16.6 cubic feet with all seats upright. Regardless, it’s roomier than a doctor’s waiting room. Shoulders never touch. The twin central armrests are wide enough for arm wrestling. Inside, they boast more storage space. Vents atop the ceiling and what Infiniti calls a “mild-flow” vent atop the dash ensure a steady breeze, along with standard 3-zone climate control. What’s missing is a cooled drink bin and 4-zone climate, both of which you’ll find in a Range Rover. The heat isn’t that strong, either. On a cold day, it took a solid half-hour to approach a comfortable warmth at the max setting. It’s a good thing the Limited comes with heated front and second-row seats, plus a heated steering wheel. 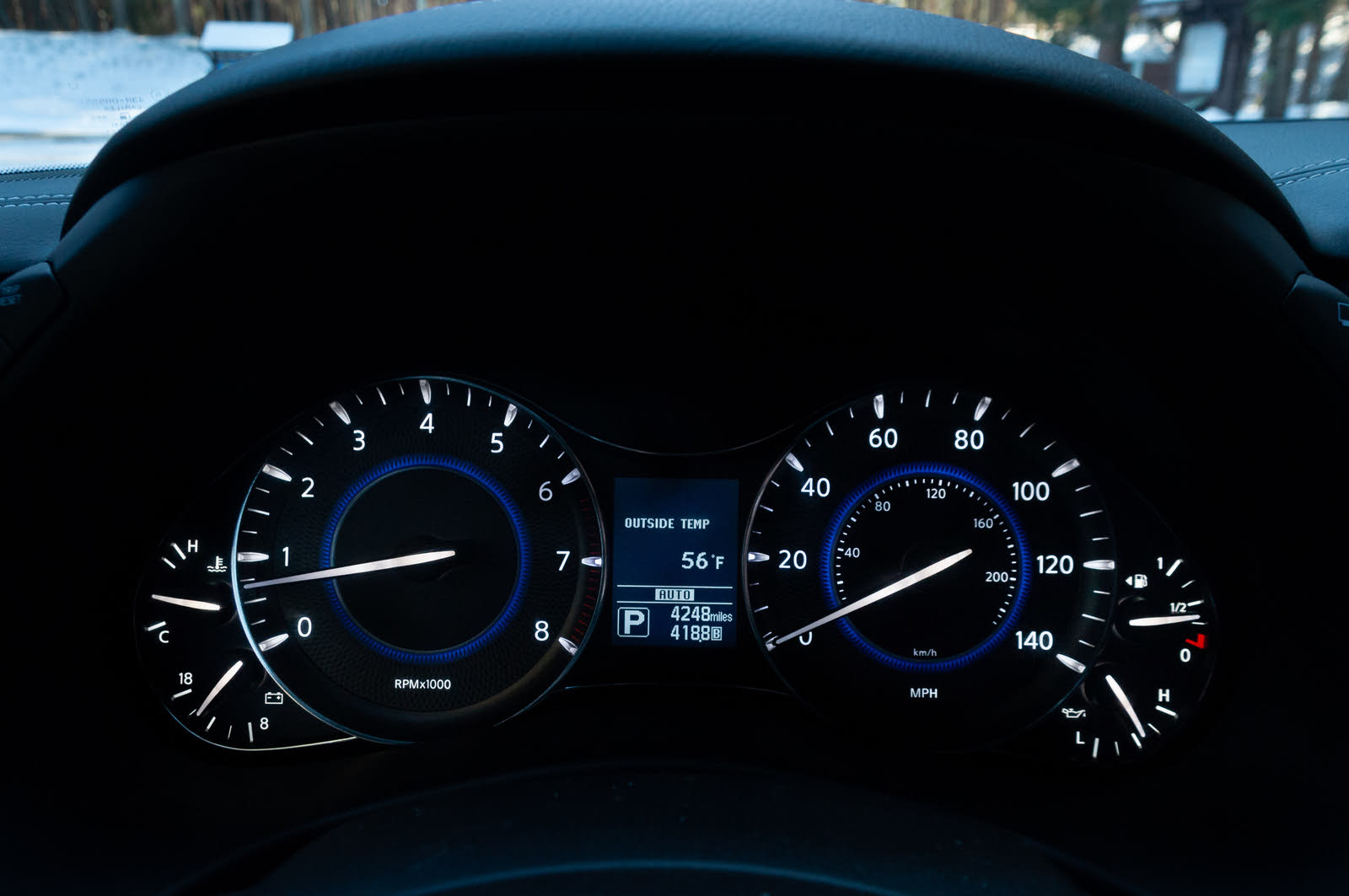 The dash is easy to use on the go, with large knobs and well-marked buttons for all controls. A twisting, 4-axis rotary knob controls the main touchscreen, which is simple to use but, like the heat, fared poorly in the cold. Sometimes the screen, knobs, and buttons wouldn’t respond until the interior warmed itself. But that’s not the real reason the QX80 bombs the technology portion of this test. Just look at the Mr. Coffee display from 1991 on the instrument panel. Pac-Man arcade stands have more resolution than this monochrome display, and arguably, Pac-Man does a lot more in less time. You can’t see next turns, adjust the stereo, or do anything like what's possible in other luxury cars, let alone a Nissan (for a third of the price). It’s useless and almost illegible.

The navigation is poorly rendered, and the entire screen looks old and small. Apple CarPlay and Android Auto are missing. There is no head-up display, panoramic moonroof, or massaging seats. There is no semi-automated driving function like Nissan’s ProPilot Assist. The 15-speaker Bose stereo is only adequate. The QX80’s most impressive feature is its rear-view mirror, which can show a live camera-feed overlay over the physical mirror. The rear entertainment system, with its headrest-mounted screens, can accept USB and HDMI inputs. That’s good. But the QX80 lacks too many expected tech features for an expensive vehicle that’s supposed to showcase the best of Infiniti, and what it offers is acceptable at best. 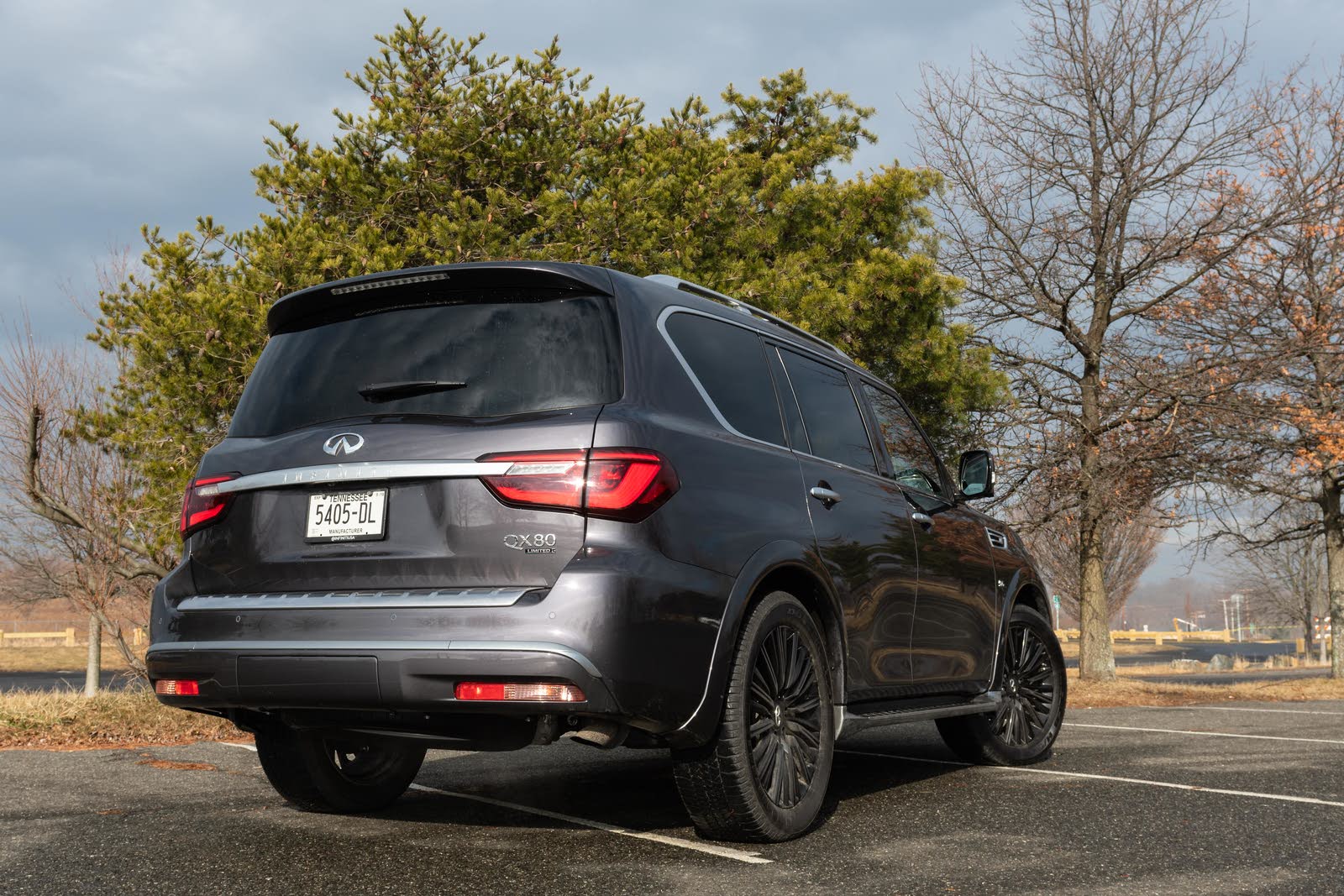 Forward automatic emergency braking with pedestrian detection comes standard, while lane-departure warning, lane-keep assist, adaptive cruise control, rear emergency braking, and blind-spot monitoring are optional. The 2019 QX80 did not fare well in frontal crash tests conducted by the National Highway Traffic Safety Administration (NHTSA), scoring only 2 out of 5 stars for the driver and 3 for the passenger. In side-impact tests, however, the QX80 scored 5 stars. Overall, the QX80 earned a 4-star rating. (These ratings are all for the mechanically identical 2018 Nissan Armada.) The Insurance Institute for Highway Safety (IIHS) has not tested a QX80. Even though its size and weight are substantial, the QX80’s older body structure is not as strong as it should be. 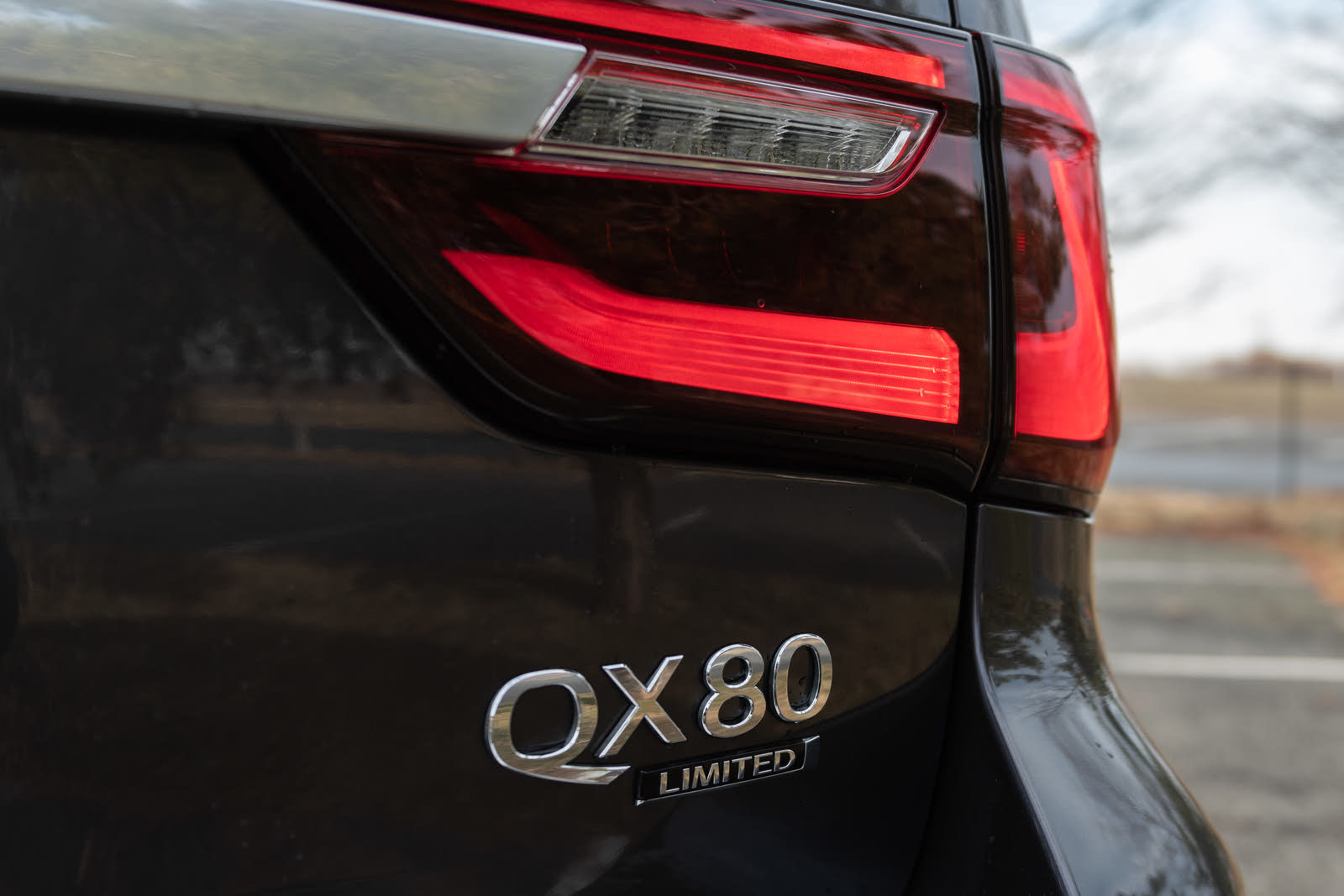 The 2019 QX80 starts at $65,400 for the RWD Luxe, $68,500 for the 4WD Luxe, and $90,100 for the Limited. Our Limited was $91,995 with $500 Anthracite Gray paint and a $1,395 destination charge. As nice inside as the Limited is, it’s simply not worth that kind of money with such outdated and outclassed technology. The performance, comfort, and style are certainly on par with competitors at the QX80’s base price, where you can’t even buy a full-size Range Rover. It’s also quite competitive against the LX 570 and Escalade. That’s the strongest reason to consider a QX80, because you do get a lot for that price.

But at 80 grand and beyond, the QX80 can’t keep up with the freshest, fastest, and poshest trucks from Lincoln, BMW, Land Rover, and Mercedes. Those SUVs handle and ride better. Their interiors are even nicer. Even more damning, the top-end Nissan Armada Platinum Reserve is priced at the bottom of the QX80 lineup despite offering the majority of this Infiniti’s luxury features.

Wimpychicky Too many blind spots on the car since model changes made in 2014. Needs to be fixed. And; as a minor note, the front end could have a little less 'bubble' to it do that when you are entering a crossroad, you would not have to literally stick the vehicle's nose out past the intersection just to see. Forgive me but 'clear sight paths' are a pet peace of mine when driving. The QX60 is even worse when it comes to blind spots. A passenger must sit fully erect with their head all the way back just to see oncoming traffic to your right. That. Coupled with being lower to the ground than the QX80 makes the QX60 even more dangerous. Thank goodness for the cameras.

GuruH8XS8 The QX80 is impractical for a family with two young children in car seats. For families that fit this description, someone would have to uninstall a car seat each time the 3rd row needs to be used. Then reinstall the car seat for their kids to ride along. Once arriving at the destination, repeat the uninstall of a car seat so third row passengers can get out of the vehicle. Then reinstall the car seat when leaving this location for the kids. This is a major oversight on INFINITI's part and should be corrected to include second row captains chairs that tilt up in a fixed position (without folding in half) and slide forward. The Armada has the same problem.

Users ranked 2019 INFINITI QX80 against other cars which they drove/owned. Each ranking was based on 9 categories. Here is the summary of top rankings.

my 2019 QX 80 has continuous starting issues. Battery has been replaced numerous times.

How Do You Handle Shipping?

Looking Nationwide, how do you handle shipping from other locations?