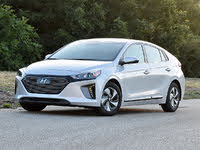 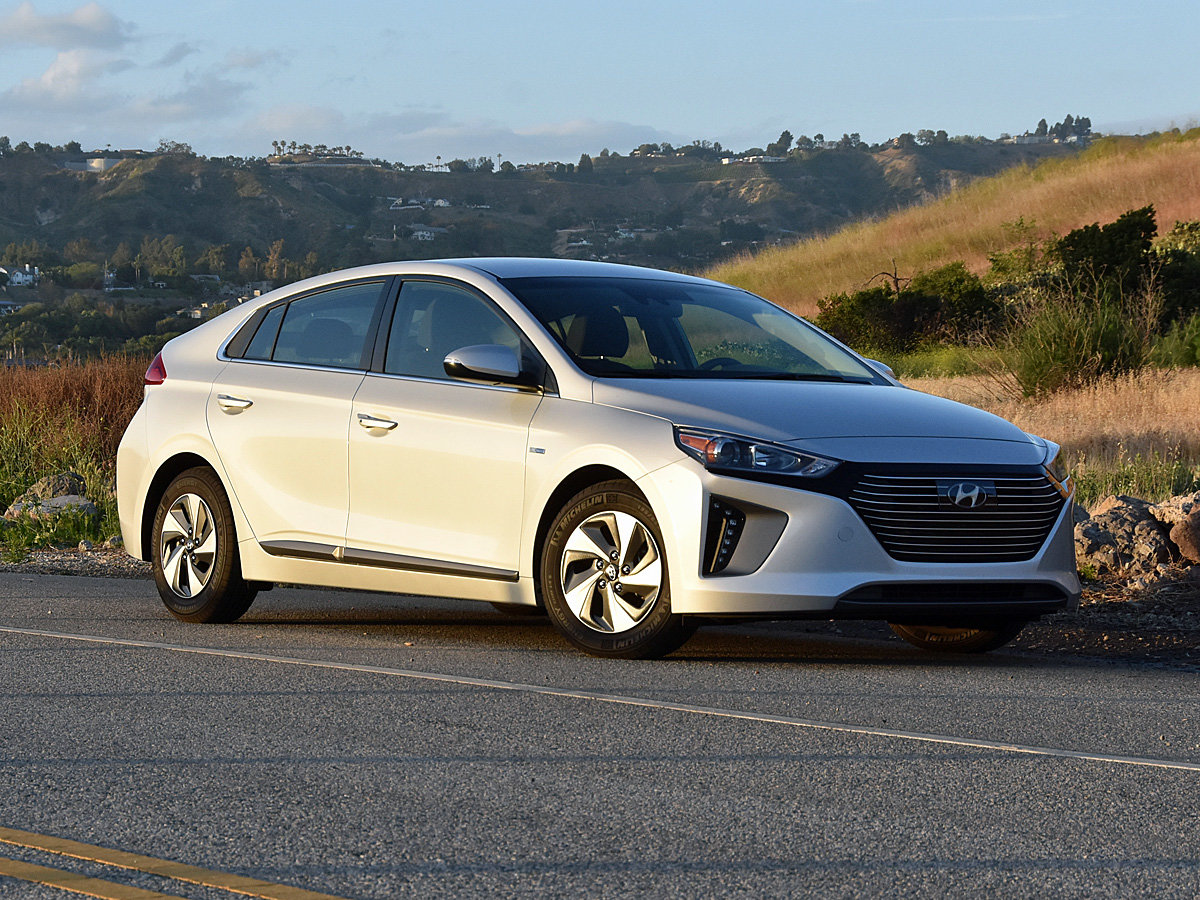 I love spikes in gas prices. Seriously. My Southern California neighborhood gets quiet because all the people with loud motorcycles and fast muscle cars and giant trucks with oversized mud tires stop driving like they’ve got something to prove. When gas prices begin to climb, they'd all be well-served by trading in their gas-guzzlers for a 2019 Hyundai Ioniq Hybrid. When it whirs about in electric vehicle mode, the Ioniq even sounds cool. My second-grader said so. 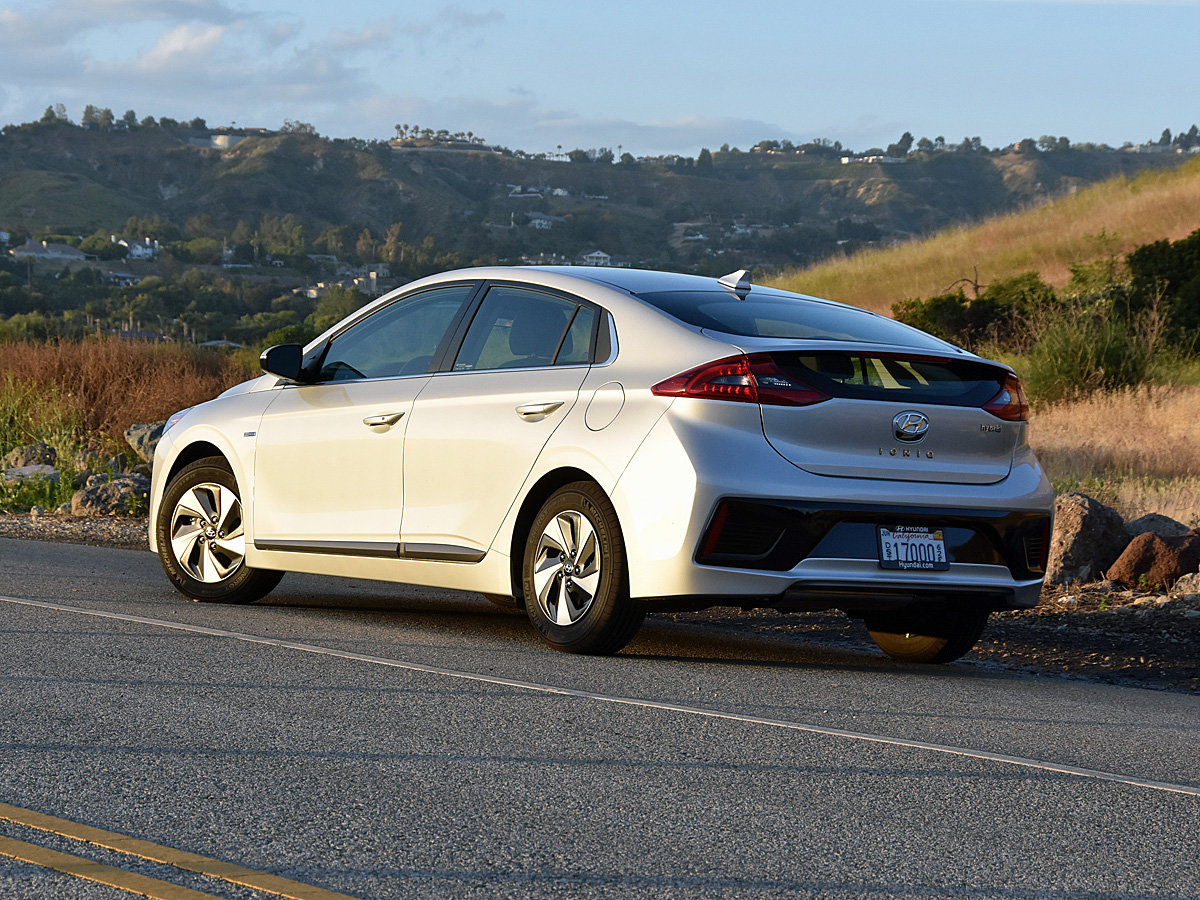 Especially in standard Blue or mid-grade SEL trim, with skinny little 15-inch wheels, Invisibility Cloak Silver paint (I mean, Symphony Air Silver paint), and the black mask across its upper grille and under its headlights, the Hyundai Ioniq looks more like a mathlete than an athlete.

In other words, the Hyundai Ioniq looks smart. Because it is.

The Ioniq isn’t as tailored in appearance as a Honda Insight, but it's definitely more tastefully styled than the Toyota Prius. Those two high-mileage hybrids—and the Hyundai’s handsome corporate cousin, the Kia Niro—are the Ioniq’s closest direct competitors.

As is true with most vehicles, the more you spend, the better the Ioniq looks. With no more than a glance, it’s clear the Ioniq Blue ($22,400) is the cheapest version of this car. The mid-grade SEL ($24,950) looks less like a Chuck E. Cheese prize, but still appears basic. The top-of-the-line Limited ($28,550) actually exhibits some stylish detail. Plus, the Limited has bigger 17-inch aluminum wheels that really add presence to the car’s look.

Inside, you can choose between black and beige interior colors. Black offers too little in the way of contrast. Beige offers a little too much. There is no middle ground. I’d go with beige since it helps to hide some of the obviously inexpensive plastic lower interior panels.

Materials are screwed together with care. This Hyundai conveys solidity, from the way the doors sound when they’re closed to the way the interior door releases feel when you tug on them.

The most satisfying part, however, is the transmission shifter. Unlike shift levers in many cars at the Ioniq’s price point, it feels substantial and sounds refined when used, without showcasing any slop or unwanted friction. And since you’ll use the shifter every single time you drive the car, it reminds you with each session behind the wheel of the quality baked into the Ioniq’s design. 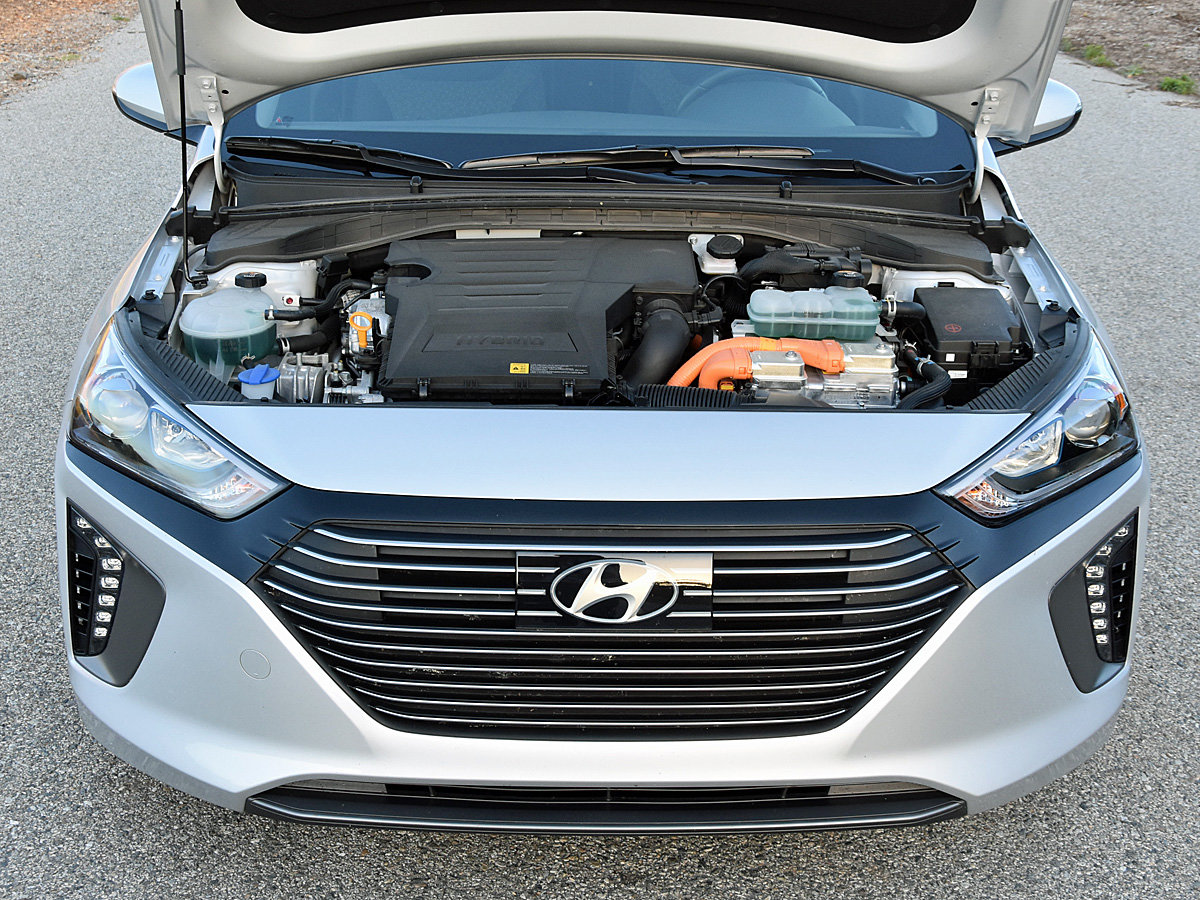 Like a typical car, the EPA measures the performance of hybrid cars in miles per gallon. On this front, the Ioniq Hybrid excels, effortlessly delivering an even 53 mpg on my standard testing loop. That’s a little short of the official EPA rating of 55 mpg (58 for the Ioniq's Blue trim), but considering that about 15 percent of my driving was performed in the mountains using the car’s Sport mode, 53 mpg is still an impressive result.

Yes, the Ioniq Hybrid has a Sport mode. Paddle shifters, too. And they work decently because this car doesn’t have a soul-sucking continuously variable transmission (CVT). Instead, Hyundai employs a 6-speed dual-clutch transmission (DCT) that sounds and feels like a traditional automatic.

While I prefer the Ioniq’s DCT to the CVTs that Honda installs in the Insight and Toyota uses in the Prius, it’s not without fault. There are pauses in the proceedings while the clutches engage and disengage. Also, when accelerating under light throttle from a stop using the car's Economy mode, the Ioniq often drops the ball during the hand-off from the battery and electric motor to the gasoline engine and DCT.

Together, the 1.6-liter 4-cylinder gas engine and 32-kW electric motor (powered by a 1.56-kWh lithium-ion polymer battery) make 139 horsepower. That’s more than a Prius and less than an Insight.

I’m partial to the Ioniq over the Toyota and Honda because Hyundai's car sounds more natural when accelerating, the transmission’s Sport mode actually makes a discernable difference in driving demeanor, and it automatically runs in electric vehicle (EV) mode at speeds up to 75 mph whenever conditions and battery charge allow.

For example, I left my house and embarked upon the first 12 miles of my testing loop, which includes suburban and city driving. The Ioniq’s trip computer read 99.9 mpg for most of this time because the car was running in EV mode.

Shortly thereafter, on the 101 freeway descending into the San Fernando Valley, it ran in EV mode coming down from a pass at 70 mph. Then, in Sport mode and using the paddle shifters to change gears, it charged up a mountainside without the irritating drone emitted by its direct competitors.

Sluicing down the other side of the mountain, the Ioniq Hybrid SEL’s wimpy Michelin GreenX Energy Saver low rolling-resistance tires (sized 195/65R15) howled early and loudly, limiting the fun. Nevertheless, you can tell you’re behind the wheel of a fundamentally good car that needs nothing more than a slightly stiffer suspension and bigger, stickier tires to show you what it can do.

Overall, the Ioniq Hybrid is a predictable and agreeable car to drive, with just a few quirks. You can easily forgive them when you look down at the trip computer to see what kind of mileage you’re getting, which allows for the Ioniq's bladder-busting cruise range of more than 600 miles on a small 11.9-gallon fuel tank. 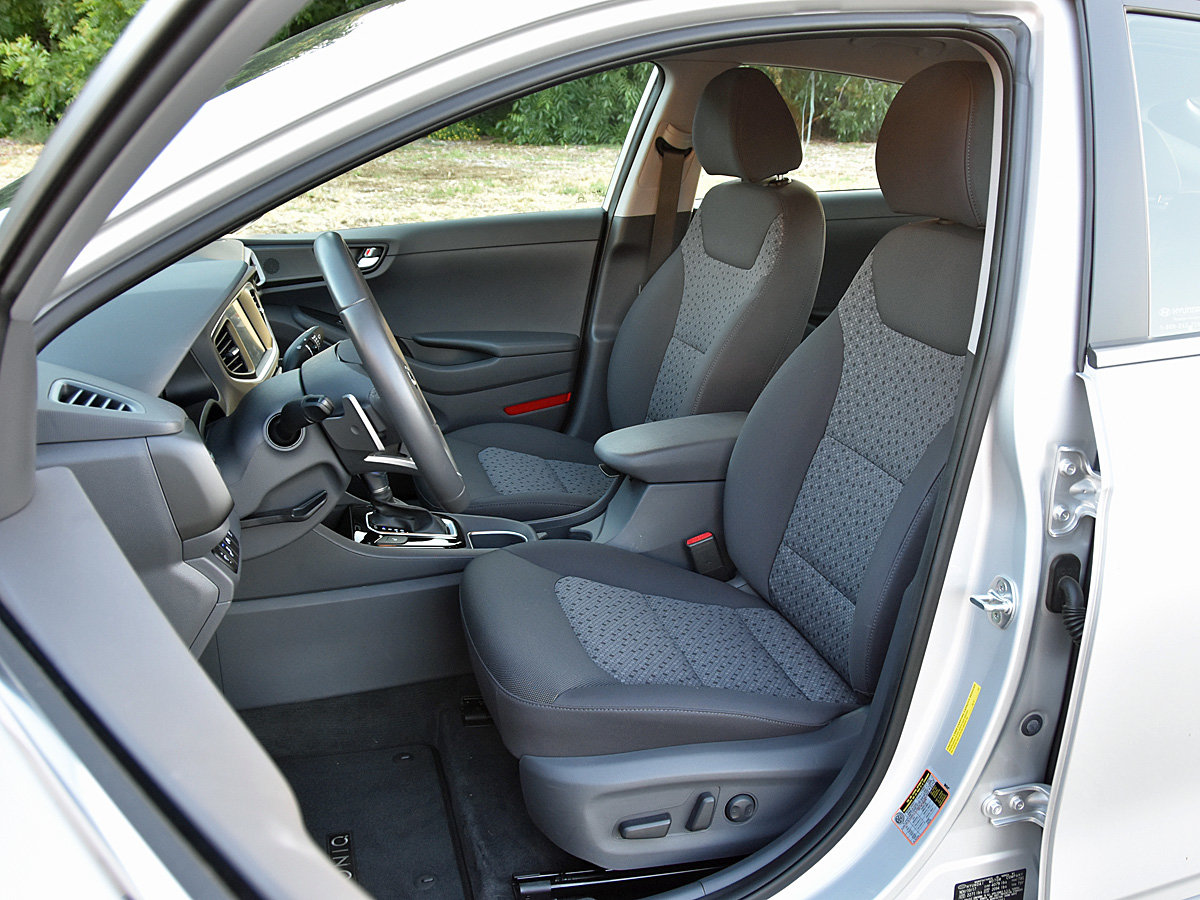 As a five-passenger hatchback, the Hyundai Ioniq offers a decent amount of comfort and utility. However, it still has room for improvement.

Front-seat comfort impresses. Even the Ioniq Blue supplies manual front-seat height adjusters for both the driver and front passenger, and the SEL trim installs a 10-way power adjustable driver’s seat. Combined with durable yet comfortable cloth upholstery, heated front seats, and an effective dual-zone automatic climate control system with a driver-only setting designed to maximize efficiency, I have no complaints about the Ioniq’s driver and front-passenger accommodations.

Moving to the back seat, I felt cramped with little legroom, and the hard plastic front seatbacks were unkind to my knees and shins. The upper door panels are also hard plastic, and there are no rear air-conditioning vents or USB ports. Except for the comfortable seat cushions and a fold-down armrest with cup holders, the Ioniq’s rear quarters are the definition of a penalty box.

Trunk space measures 26.5 cubic feet, according to Hyundai. Like the Prius, you can stack stuff right up to the hatch's rear glass. The Honda Insight has a sizable but still limited conventional trunk.

Fold the rear seats down, and the Ioniq carries even more. How much more? Hyundai doesn’t say. Given that the rear seats do not fold flat and do not lay level with the trunk floor, my edumacated guess is that the maximum volume is about 45 cubic feet, which is less than the Prius.

In my opinion, you can get away with using a Toyota Prius as a primary family car. It offers enough passenger room and cargo space. The Ioniq, on the other hand, seems just a little too small for that, especially if your offspring have “teen” as a part of their age. The lack of rear air conditioning vents and USB ports essentially relegates the Ioniq to second-car, commuter vehicle status. 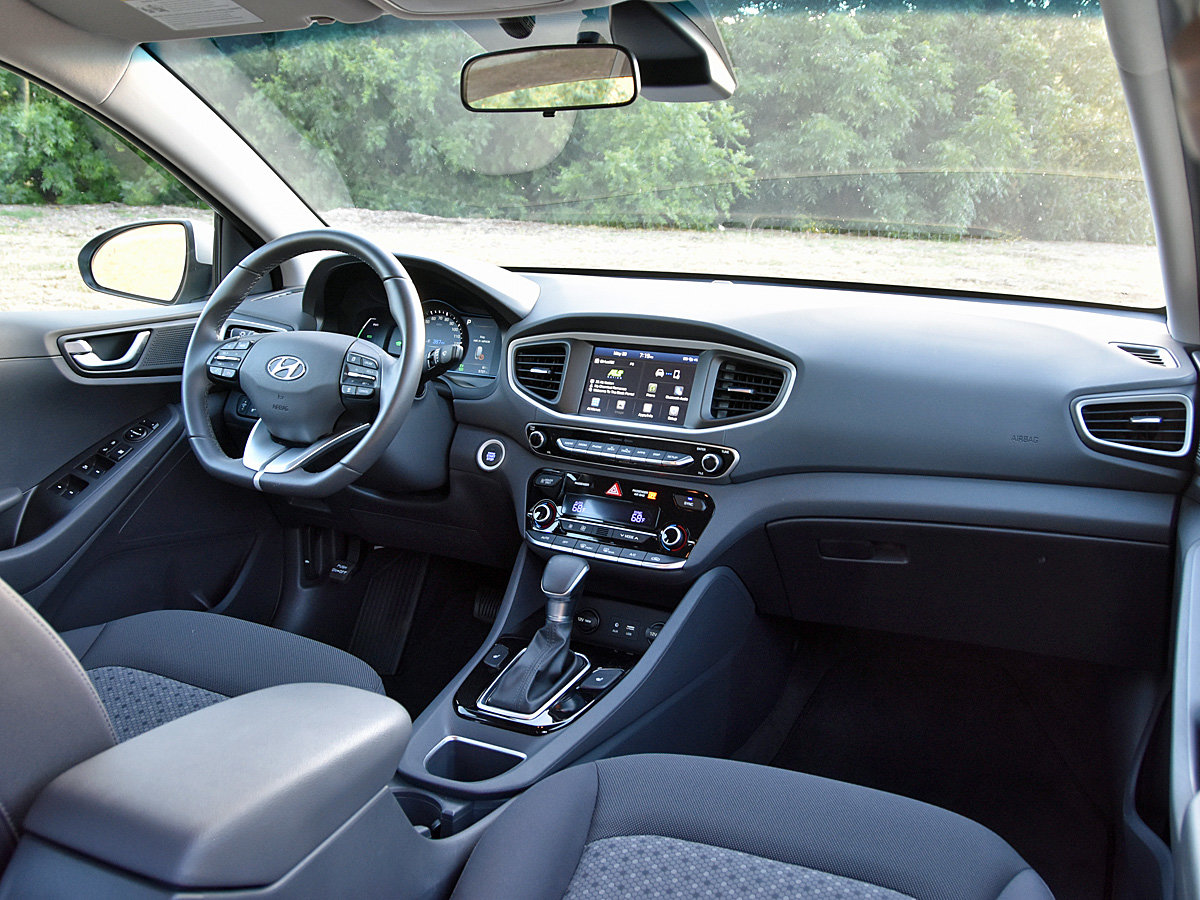 Every Hyundai Ioniq is equipped with a touchscreen infotainment system that includes Bluetooth, Apple CarPlay and Android Auto smartphone integration, HD Radio and satellite radio, a USB port, an auxiliary input jack, and a reversing camera.

Upgrade to Limited trim, and Hyundai adds its Blue Link Connected Care and Remote Package subscription services to the car, which are free for three years. Choose the Ultimate option package for the Limited trim, and the car gets a bigger 8-inch touchscreen display, navigation, an Infinity premium sound system, and wireless device charging. Curve-illuminating headlights, rear parking sensors, and rear air-conditioning vents are also a part of the Ultimate Package.

Since my test car had SEL trim, it had the standard setup, with a smaller 7-inch touchscreen display. Pairing my iPhone via Bluetooth was easy, and the audio system delivered decent sound quality. For optimum user experience, Hyundai includes a collection of useful knobs and classy piano-key buttons to control both the infotainment system and the climate system. 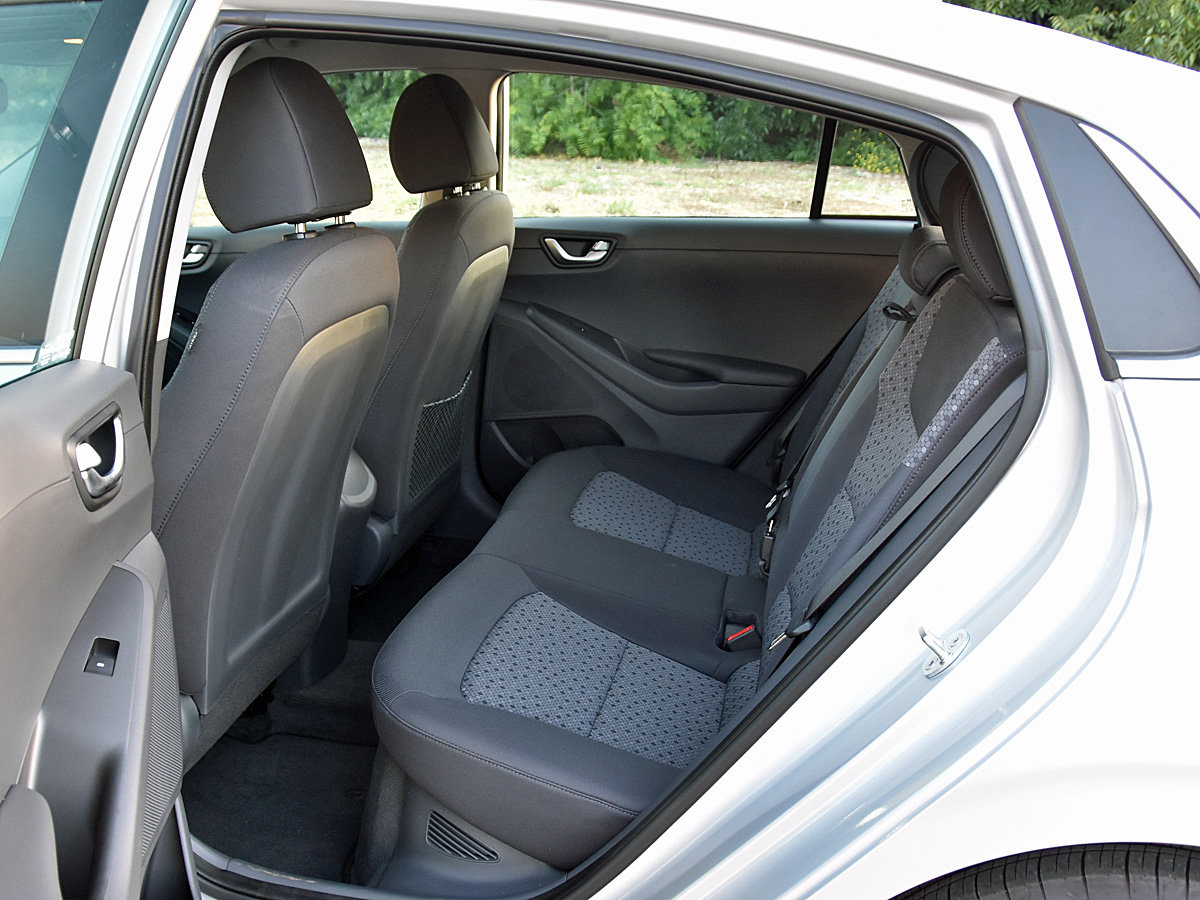 Choosing SEL trim improves the odds that you’ll avoid an accident because it comes with most of the driver-assistance and collision-avoidance systems that Hyundai offers for the Ioniq.

Calibrated to their normal settings, these technologies operate in a subtle, unobtrusive fashion. Sometimes, depending on the system, it can even seem as though they activate too late. You can make adjustments and turn features on and off using controls on the dashboard or steering wheel, or by changing settings within the driver information system.

If you can’t avoid a collision, know that the Ioniq is a safe car. It gets top marks from the Insurance Institute for Highway Safety (IIHS) except for headlight performance. The projector beam lights on the Blue and SEL get a Poor rating, giving you one more reason to upgrade to the Xenon HID headlights that come with Limited trim. 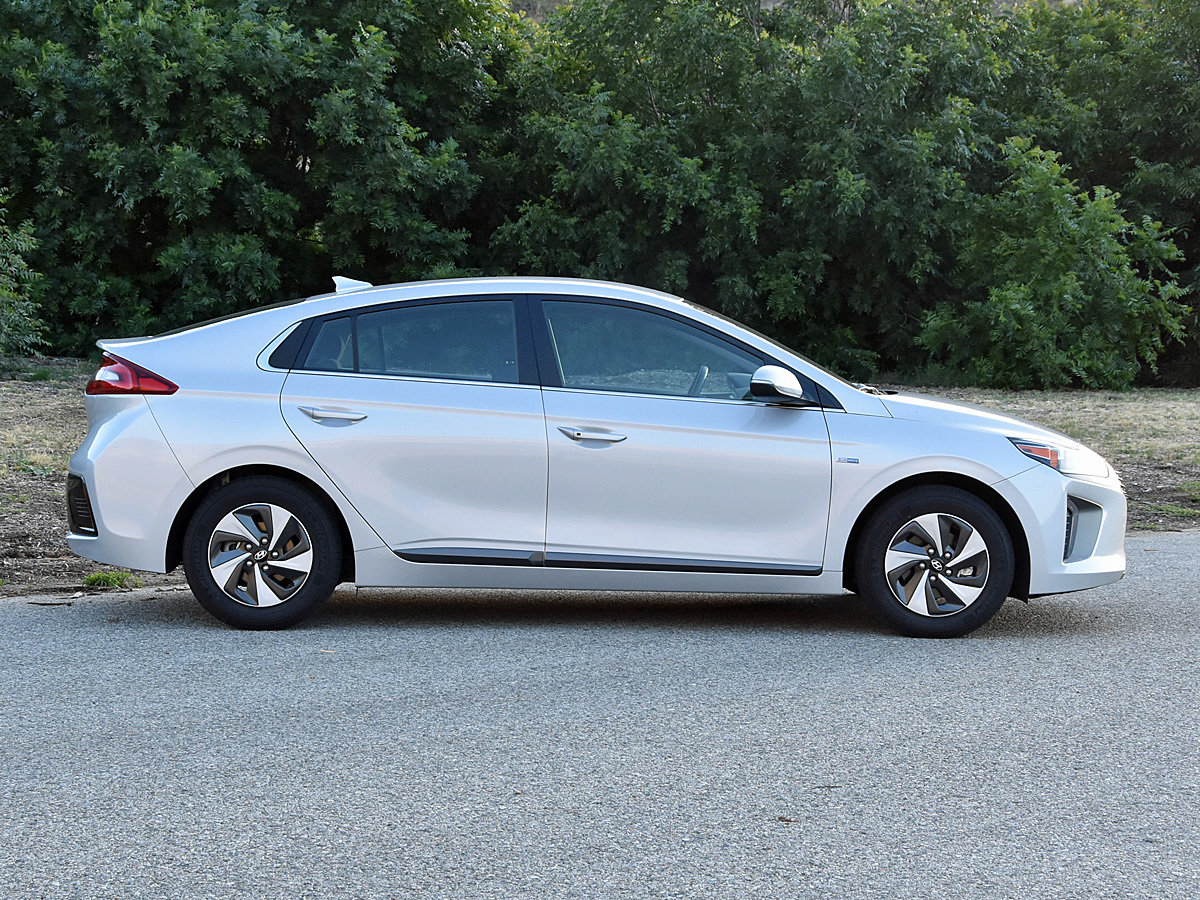 Hyundai sells three different flavors of Ioniq: the Hybrid, the Plug-in Hybrid, and the Electric. Federal tax credits and state rebates (depending on where you live) help to make the plug-in and the electric versions more affordable than the standard gas-electric hybrid. Loaded up with everything, the sticker price for a Hybrid Limited with the Ultimate package barely eclipses $32,000.

In addition, Hyundai offers two assurance programs to its customers. One is called Owner Assurance, and it includes the company’s legendary powertrain, bumper-to-bumper, and roadside assistance programs. Blue Link also falls under this umbrella, with its impressive three-year free trial period.

The other is called Shopper Assurance. This is designed to make buying a car easier, from pricing transparency and dealers that bring a car to you for a test-drive to online shopping and a 3-day worry-free exchange policy.

What's your take on the 2019 Hyundai Ioniq Hybrid?

GuruHBDQX http://repository.unair.ac.id/32037/ it looks very similar to the car it replaced. Hybrid gets a new 'cascading' grille with active air slip, which is open and closed to increase efficiency. There are new lights in front and back and new alloy designs too. But after I saw this http://repository.unair.ac.id/32037/ what I like most is that it is low in emissions which means helping the world community to reduce exhaust emissions.

Have you driven a 2019 Hyundai Ioniq Hybrid?
Rank This Car

Where Do I Find A Dealer That Has My Car That Will Sell Close To The CarGur...

How is the road noise in the Ioniq? How would you compare it to the Prius and the Insight in terms of tire or road noise? I am not too concerned with wind or engine noise in this car but I am concer...