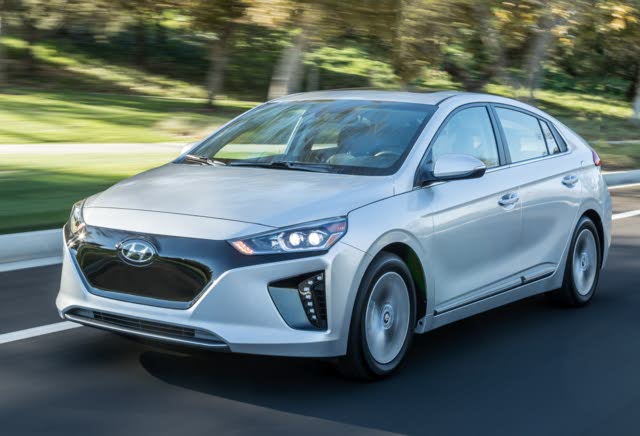 As a fully electric vehicle, the Ioniq Electric uses an electric motor and 28 kilowatt-hour lithium-ion polymer battery to put out 118 horsepower and 218 pound-feet of torque. It’s good for 136 miles-per-gallon-equivalent (MPGe) and 124 miles of range. While the latter figure isn’t as good as some competitors, it more than meets most commuters’ daily needs. With the standard 6.6 kWh on-board charger and integrated cable, Hyundai estimates a 220-volt “Level 2” charger will take 4.5 hours to bring the battery from depleted to full. The Ioniq Electric also supports “Level 3” DC fast-charging that replenishes 80% of battery capacity in under 20 minutes. What’s more, every model gets paddles behind the steering wheel that control the severity of the regenerative brakes, from zero (off) to three (maximum regeneration). This allows for one-pedal driving, which lets you slow down the car and recapture kinetic energy by letting your foot off of the accelerator, rather than tapping the brake pedal.

The Ioniq Electric’s interior is approachable. It features an understated and modern design with familiar controls. The 7-inch LCD instrument cluster mimics readouts from a conventional gasoline-powered car and all the controls have dedicated buttons and switches, rather than complicated touch screens. Even the push-button gear selector is laid out ergonomically. The Ioniq Electric seats five people, although those in the back may find headroom lacking, as a result of the car’s aerodynamically sloped roofline. Behind the rear seats, there’s 23 cubic feet of cargo space. The seat splits 60/40 and folds to accommodate bulkier items.

The Hyundai Ioniq Electric doesn’t have the same range and performance as the Chevrolet Bolt and Tesla Model 3, but it undercuts those cars by thousands of dollars. Still, the Nissan Leaf offers a bit more performance and capacity for about the same starting price. However, there’s plenty to admire in the Ioniq Electric’s presentation as a simple, friendly car with no learning curve. The warranty, which is unlimited for the battery pack for its first owner, is more than competitive. And, like most other electric vehicles, it is eligible for the full $7,500 tax credit. So if you’re a resident of California and the Ioniq Electric meets your needs, be sure to check it out.

What's your take on the 2019 Hyundai Ioniq Electric?

Have you driven a 2019 Hyundai Ioniq Electric?
Rank This Car