For the 50th anniversary of one of the greatest car movies ever made, Ford presents the latest version of the Bullitt Mustang, with extra style, extra power, and extra attitude.

Every once in a while, an automotive icon comes along that changes not just the car industry, but multiple industries. I’m talking about examples that go beyond car models. Not just the Beetle, but Herbie the Love Bug. Not just the Charger, but the General Lee. Inarguably, the greatest of these is the Bullitt Mustang. Fifty years ago, it was driven through the streets of San Francisco by the coolest actor the world has ever known—Steve McQueen—in the greatest car chase ever captured on celluloid. For the 50th anniversary of the movie, the Bullitt takes a Premium GT fitted with the Performance Pack and adds mostly cosmetic changes: logo and spoiler deletes, a blacked-out grille, unique Bullitt badging, chrome trim, a cue-ball shifter, digital gauges, and these gorgeous, Bullitt-specific 19-inch wheels wrapped in Michelin Pilot Sport 4s tires. There’s also the usual Highland Green paint job that mimics Steve’s example, but it’s not just aesthetic changes here. The Bullitt also gets a special exhaust and the intake from the GT350 that results in a 20-horsepower boost, an extra 8 mph on the top end, and the second-best sound you’ll ever hear a Mustang make. Sorry, Bullitt, but the GT350 still takes the top spot there. 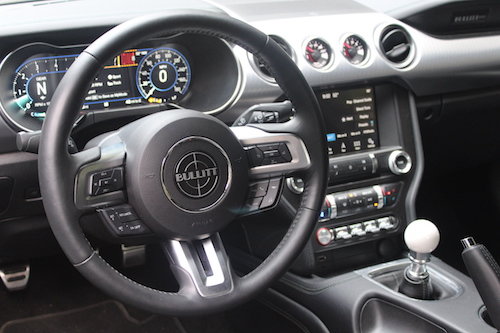 Beyond that, you’re not really going to feel the difference here, not with regard to speed anyway. Twenty horsepower sounds like a lot, but in a car that’s already sporting a claimed 460 hp (a number that’s almost certainly downplayed for a variety of reasons), that 4% boost isn’t really enough to feel anything other than superior to any Mustang with 20 hp less than you. Still, power is power, and I’ll take it. You can also rest easy knowing your Bullitt will top out at 163 mph—8 more than the regular GT.

To make the Bullitt, Ford took the GT with the Performance Pack—which adds larger brakes, Michelin Pilot Sports, suspension tuning in the form of stiffer front springs and a thicker rear anti-roll bar, an upgraded radiator, and a more aggressive diff ratio—and adds all the changes listed above. That means the starting price for the Bullitt is $46,595, quite a jump from the standard GT’s $35,355, even if you add the $3,995 Performance Pack. My Bullitt was also fitted with the $2,100 Bullitt Electronics Package that got it blind-spot monitoring, a Bang & Olufsen stereo, a driver memory system, and voice-activated touchscreen navigation. Additionally, because the Bullitt comes standard with the Performance Pack, the $1,695 MagneRide dampers are an available option and were included in my test example. This brought the final price, with a $1,095 delivery charge, to $51,485. 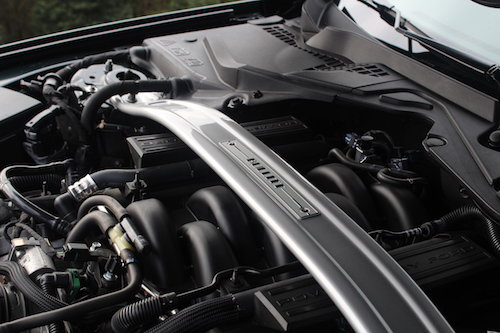 With a nearly 500-hp V8, adaptive dampers, and a 6-speed manual, you’re going to have some fun. Sixty miles per hour will arrive in just over 4 seconds, and as you climb up toward the car's 7,400-rpm redline, you’ll be treated to a raucous symphony of violence both front and back that’ll deliver you in style to the end of the quarter-mile in about 12.5 seconds. That’s quick enough to get some attention.

But don’t expect a plush ride here. Even with the adaptive dampers, things were quite stiff in the Bullitt. Given this edition is more about style than all-out performance, I would’ve been happy with a slightly more sedate suspension tune, but the ability to flick out that rear end at will and hold it to your heart’s content is a more-than-acceptable tradeoff in my opinion.

The 6-speed transmission is complimented by a more aggressive rear end that never leaves you wanting for more torque, and an extremely forgiving clutch paired with rev-matching for downshifts and hill-holding means anyone can hop in the Bullitt and drive away. That’s a very good thing, as the Bullitt is available only with a 6-speed manual transmission. And with an 18.5-foot turning radius, it’s not a total pain to drive on the street, either.

I’m sure that if you’re considering the Bullitt, fuel economy isn’t very high on your list of priorities, but the Bullitt doesn’t do terribly here considering its powertrain. Estimates of 15 mpg city and 25 highway won’t win you any awards from Greenpeace, but they're pretty impressive regardless. Even better, those numbers are actually achievable. If you’re really giving it the beans, expect those numbers to drop down into the single digits, but in regular spirited driving with some weekend trips down the coast tossed in for good measure, those EPA estimates are easy goals to reach. That means your wallet won’t be crying all the way to your local track, where you can then drop the Bullitt into one of several performance driving modes, including ones specifically designed for the drag strip and road courses. 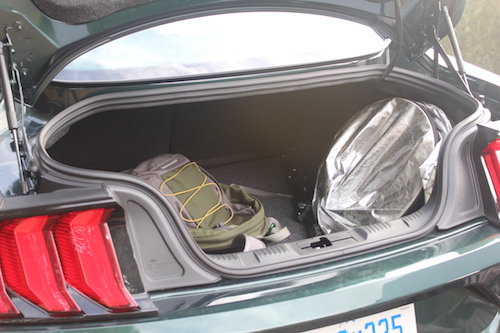 The Bullitt’s function is to look good, sound mean, and be fast. All three of those boxes are checked with authority in the best possible way. If you’re hoping to haul 4 adults around in comfort or swing by your local DIY store for the supplies to hang drywall in your new addition, you’ll be disappointed with the car's 13.5 cubic feet of storage. As it stands, the Bullitt delivers everything it promises in spades.

The big disappointment here is the same as with every Mustang. All the aesthetic enhancements inside are gorgeous, but they still don’t fully mask some of the cheap plastics and sloppy fitment you can encounter behind the wheel. With more than a half-century’s worth of heritage behind it, the Mustang just deserves better. With a price tag that eclipses 50 grand, the Bullitt demands it. Ford, it’s just time to do better. 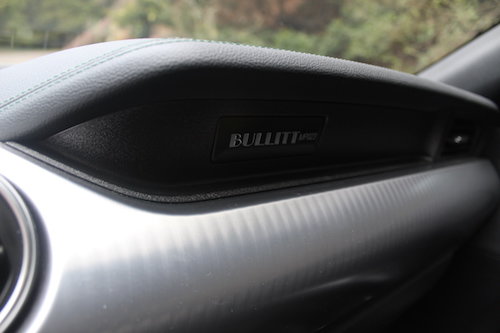 The Mustang used to be the Luddite of the automotive world, hanging onto tech relics like carburetion, pushrod engines, and live rear axles long after the rest of the industry had already gone through several generations of technological evolution. But that’s no longer the case. The Bullitt's engine is modern, its suspension is modern (and optionally adaptive), and its rear is independent. More than that, you can choose your personality profile in your Mustang these days, with selectable drive modes that vary from slightly sedate to vaguely violent.

Mess with the screens behind the wheel, and you’ll find features like line-lock to allow you to warm up your tires at will, track timers, drag mode, and unique gauge layouts to complement each. It’s a long way from your father’s (or likely your grandfather’s at this point) Mustang, and it means America’s true pony car is more versatile than ever. With the Bullitt Electronics package, you get the aforementioned blind-spot monitoring, upgraded 12-speaker stereo, and voice-activated navigation, and everyone gets the newest version of Sync infotainment, though I’d still recommend using the standard Android Auto and Apple CarPlay. They’re just better systems, overall. If you’ll take a bit of advice, keep the interface in “Night” mode, as that just matches the interior much more pleasantly than the bright “Day” colors. 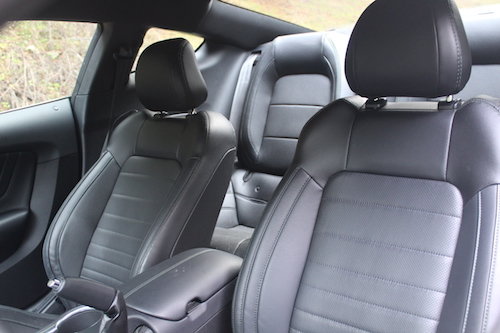 The big news here is in the braking. While the standard Mustang can stop from 60 mph in 111 feet, the Bullitt cuts that down to 105, which should really just be the normal benchmark. Otherwise, there’s a lot of good news to be had. Just like the regular Mustang, the Bullitt enjoys a 5-star safety rating in every category from the government’s National Highway Traffic Safety Administration (NHTSA). The independent Insurance Institute for Highway Safety (IIHS) was also kind, though it awarded an Acceptable rating for the driver’s side small overlap test and a Marginal rating for the child safety latches. 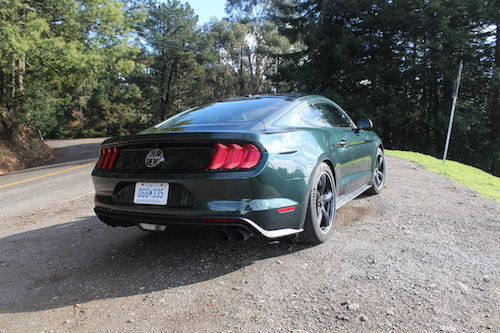 Now to be fair, Dad’s Bullitt didn’t have an independent rear suspension, magnetic dampers, or nearly 500 horsepower, not to mention multiple drive modes (including one for track and strip), navigation, or all the safety systems. If you’re okay with the regular GT’s price, the Bullitt’s extra 3 grand seems well worth the money for the style alone, not to mention the added performance, but I still can’t pretend this is a cost-effective endeavor.

Users ranked 2019 Ford Mustang against other cars which they drove/owned. Each ranking was based on 9 categories. Here is the summary of top rankings.

Have you driven a 2019 Ford Mustang?
Rank This Car

Why Do You Keep Changing My Down Payment

What Is A Rebuilt Title

What Years Of The Ford Mustang Will Interchange With Body Parts,

Need to get body parts for my 99 ford mustang, interior, what years are the same?

I got my 2019 base model mustang gt with the performance package about 2 months ago with 400 miles on it. Since then I’ve put 15000 miles on it, upgraded most of the interior (sync 3, instrument c...

I am not a dealer and just trying to list my car. iWhat ever happen to your site for selling a car??? It use to be straight forward and easy to us. Now it is a mess, confusing difficult to use.