Looking for a Used X7 in your area? 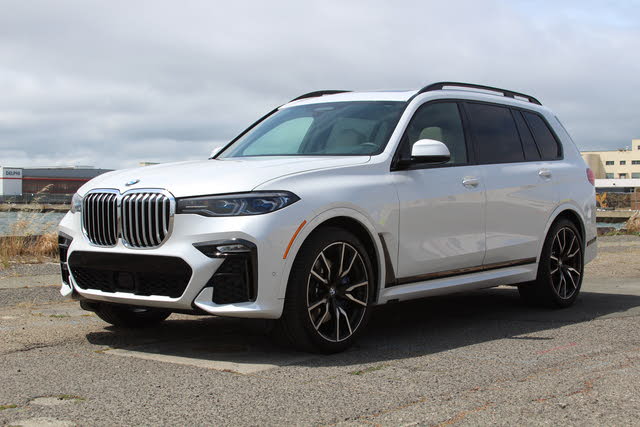 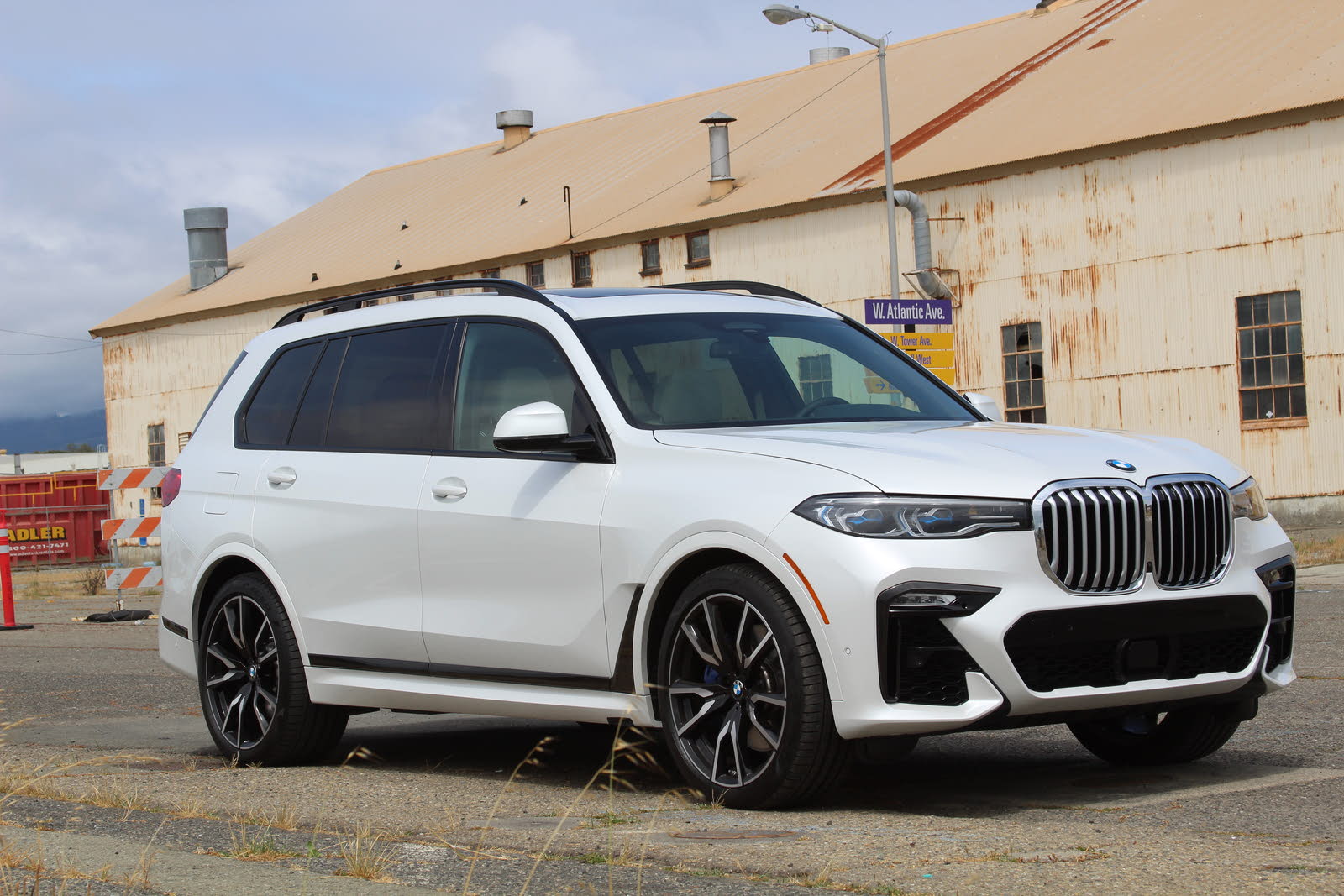 It’s been a long, strange trip watching companies like Porsche and BMW—companies built on the reputations of their sports cars and sedans—begin to make crossovers and SUVs, but it’s hard to argue they haven’t been successful. With models like the X3 and X5 putting up sales numbers that often outperform their sedan counterparts—other than the 3 Series, of course—you knew BMW wouldn’t leave all that delicious full-size SUV money on the table for long. With the 2019 X7 and its dedicated three rows of seats, BMW fans with increased passenger needs will no longer be forced to rely solely on the X5's optional (and cramped) third row. 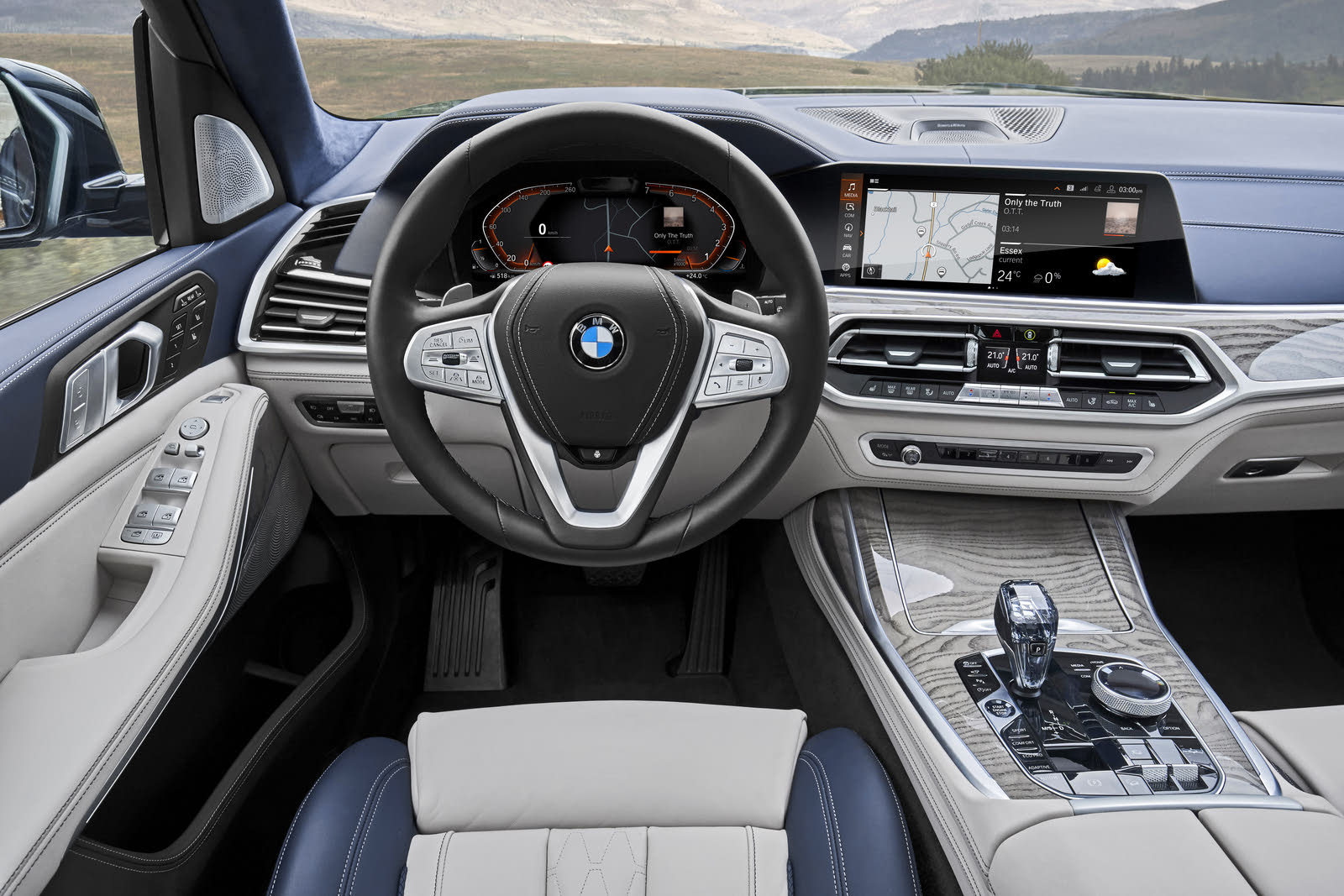 If you think the X7 is just a bloated X5, you’re wrong. Or at least, only half right—specifically the front half, where the two are nearly indistinguishable at first glance, until you notice the X7's bigger headlights and grille. Along the sides and in the back, the differences are more obvious, but it all sort of falls apart. For me the real appeal of the X5's styling can be found in its side profile; it looks as though it’s leaning forward, ready to jump off the line. The X7 looks more like it’s leaning backward, with the rear end stretched out a bit.

And in truth, that is what happened. Sure, the X7 is 3 inches taller than the X5—and that does make a huge difference inside—but its biggest distinguishing factor is its length. Nearly a foot of extra length means the third row in the X7 is truly usable, even for adults; that’s something I would never say about the X5. The X5 is actually just shy of an inch wider than the X7, but with the extra length and headroom extending into that third row, you’ll never notice the X7's narrower quarters.

That length does have a drawback, however. When I tested the X5, I was pleased to find how clear the sightlines were to the rear. In the X7, things have shifted enough that most of that visibility has disappeared. The small rear windows and the very large B- and C-pillars effectively block most of your rear view, and even with 4-wheel steering, I often found myself needing to do three-point turns in parking lots.

The X7 can be had in one of two flavors: xDrive40i and xDrive50i. Each is distinguished by its powerplant. While the former sports the ubiquitous and silky turbocharged 3.0-liter inline-6, the latter upgrades to a twin-turbocharged 4.4-liter V8. Both are mated to the ZF's venerated 8-speed automatic. The xDrive40i's $73,900 MSRP will get you all-wheel-drive (AWD), an air suspension, 4-zone auto climate control, a panoramic sunroof, adaptive LEDs, and power everything. A 12.3-inch touchscreen handles the majority of duties on the tech front, providing navigation, an updated iDrive interface, and subscription-based Apple CarPlay.

That all comes with the xDrive50i’s $92,600 MSRP, along with the engine upgrade, a 16-speaker Harman Kardon stereo, multi-contour front seats, and genuine leather.

There are several packages available for either trim, including the $1,200 Cold Weather package with heated rear seats, front armrests, and steering wheel, and 5-zone climate control. The $1,700 Luxury Seating package takes those multi-contour seats and adds ventilation and massage, while an Off-Road package gets you skid plates front and rear, a mechanical locking differential, and four selectable off-road driving modes, all complemented by unique graphics in the gauge cluster for $1,650.

Many people will go for the Premium package, lured by the soft-close doors, remote engine start, heated and cooled cupholders, a head-up display, and the infotainment system's finicky gesture control system, which is all an unfortunately shaky return for the $3,000 purchase price. Finally, the xDrive50i is solely eligible for the $2,100 Executive package, which adds adaptive LED laser headlights, LED lighting to the panoramic sunroof, and real glass for the gear selector and other buttons and inputs. 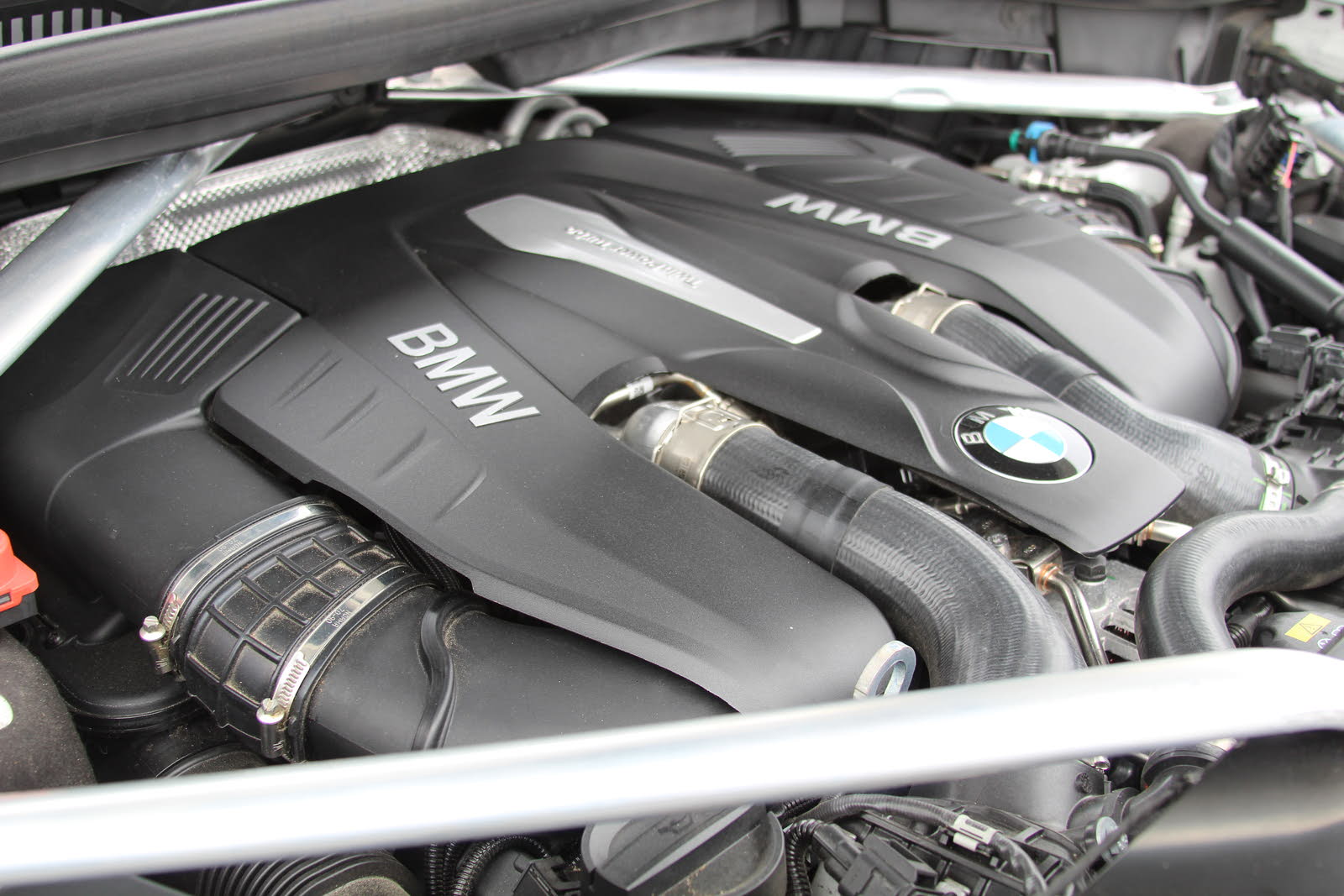 With the 3.0-liter turbocharged inline-6, you get 335 horsepower and 330 pound-feet of torque sent through an 8-speed automatic. I tested this engine and transmission combo in the X5 and was extremely impressed by its smooth operation, linear power band, and sound—quiet at idle and throaty when pushed. However, I do wonder how much the X7's extra weight would tax that engine.

There are no such concerns with the xDrive50i’s 4.4-liter, twin-turbocharged V8. Its 456 hp and 479 lb-ft of torque motivate the X7’s 5,500 pounds with ease and deliver a strong growl when pushed. It’s just as smooth as the inline-6, just as refined, but when you get on it with the six, you get a nice little aggressive purr that lets you know all that power is sitting there, just waiting for you to use it. Here it’s a growl, with the guts to back it up—good enough for a 5.2-second 0-60 time. And that’s not bad for a two-and-a-half-ton vehicle.

With numbers like that, you can’t expect magic at the gas pump, but the X7 doesn’t do terribly. The EPA estimates a return of 15 mpg city, 21 highway, 17 combined, and I was easily able to replicate those numbers. Still, with the inline-6 returning 20/25/22, I’d want to drive the xDrive40i and see if the smaller engine can handle the job, as the jump up to V8 power is expensive.

Speaking of large, there’s no getting around the X7's size. That extra weight, extra height, and extra length all impact its handling, and you’ll notice that as you push through turns. A Dynamic Handling package aims to help, as it adds 4-wheel steering, M Sport brakes, and BMW’s Active Comfort Drive with Road Preview, which watches the road ahead to predict suspension changes and inputs. It costs $3,850 in the xDrive40i, while the xDrive50i adds an M Sport differential and ups the price to $4,750.

The 4-wheel steering and many M Sport upgrades do their best to mitigate the issue, but heavy is heavy, and tall is tall. Despite BMW’s marketing, don’t go to the dealership expecting a sports car. That said, I can’t think of anything this big that handles this well. 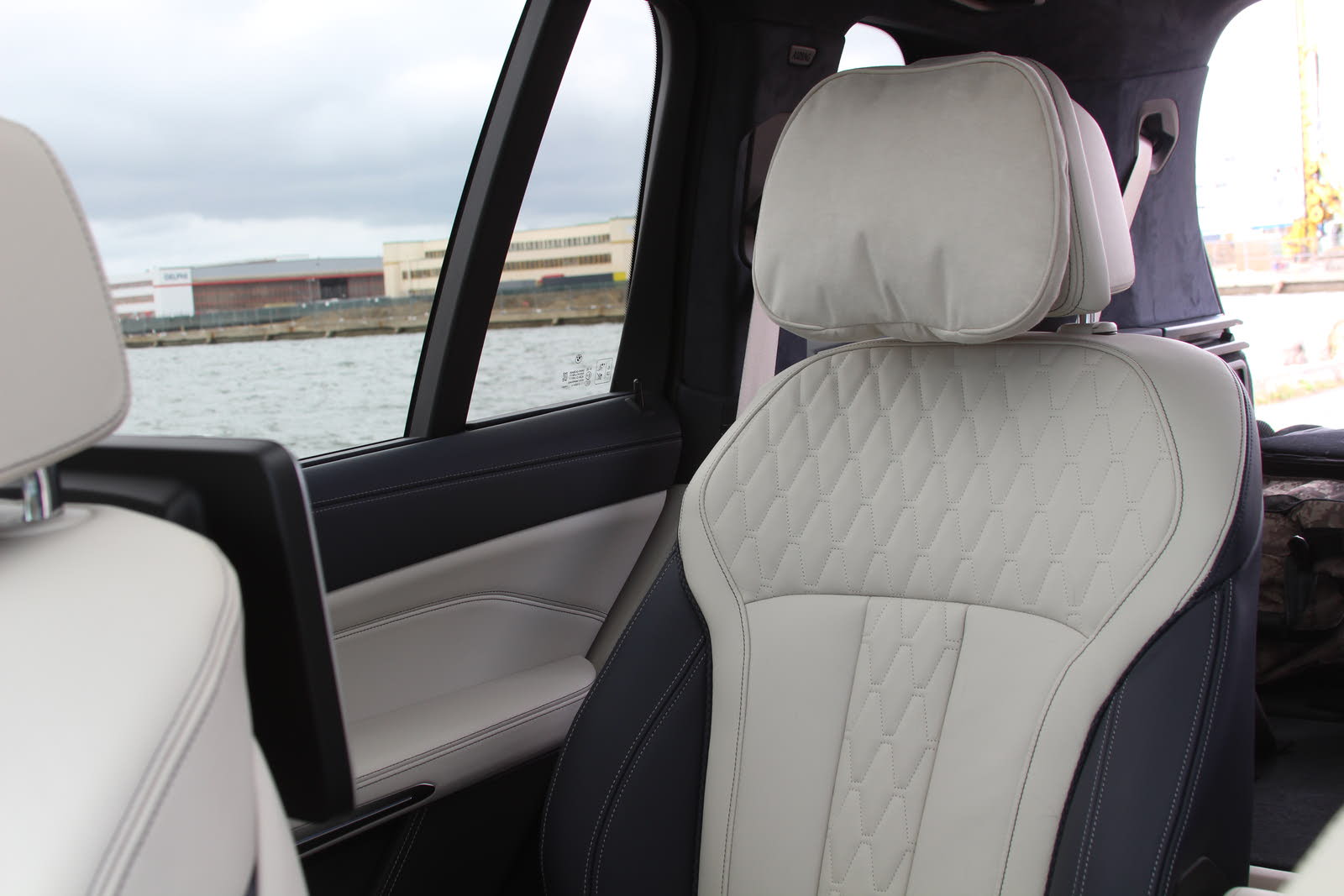 If you want to comfortably put three rows of adults in a BMW, this is your only option. And depending on how much you want to spend, you get to decide your passengers' level of luxury. Check the right boxes, and even third-row passengers can enjoy their own sunroof, climate control, heated seats, and USB-C ports. Of course, this privilege also comes with a penalty, and I’m not talking price. Keep those rear seats in place, and you’re looking at just 12.8 cubic feet of cargo room in the trunk. That’s enough for a couple of backpacks and a few bags of groceries, but don’t think you’re going to load this up with seven adults and their bags and go anywhere. BMW has prioritized passenger comfort here to the detriment of cargo. But if you fold all the seats, you’re rewarded with a very impressive 90.4 cubic feet of space, which is quite competitive for the class.

The X7's size will also make parking lots and tight city streets a bit more of a chore, but things never wade into dangerous or unmanageable territory, and properly equipped, the X7 can tow 7,500 pounds. 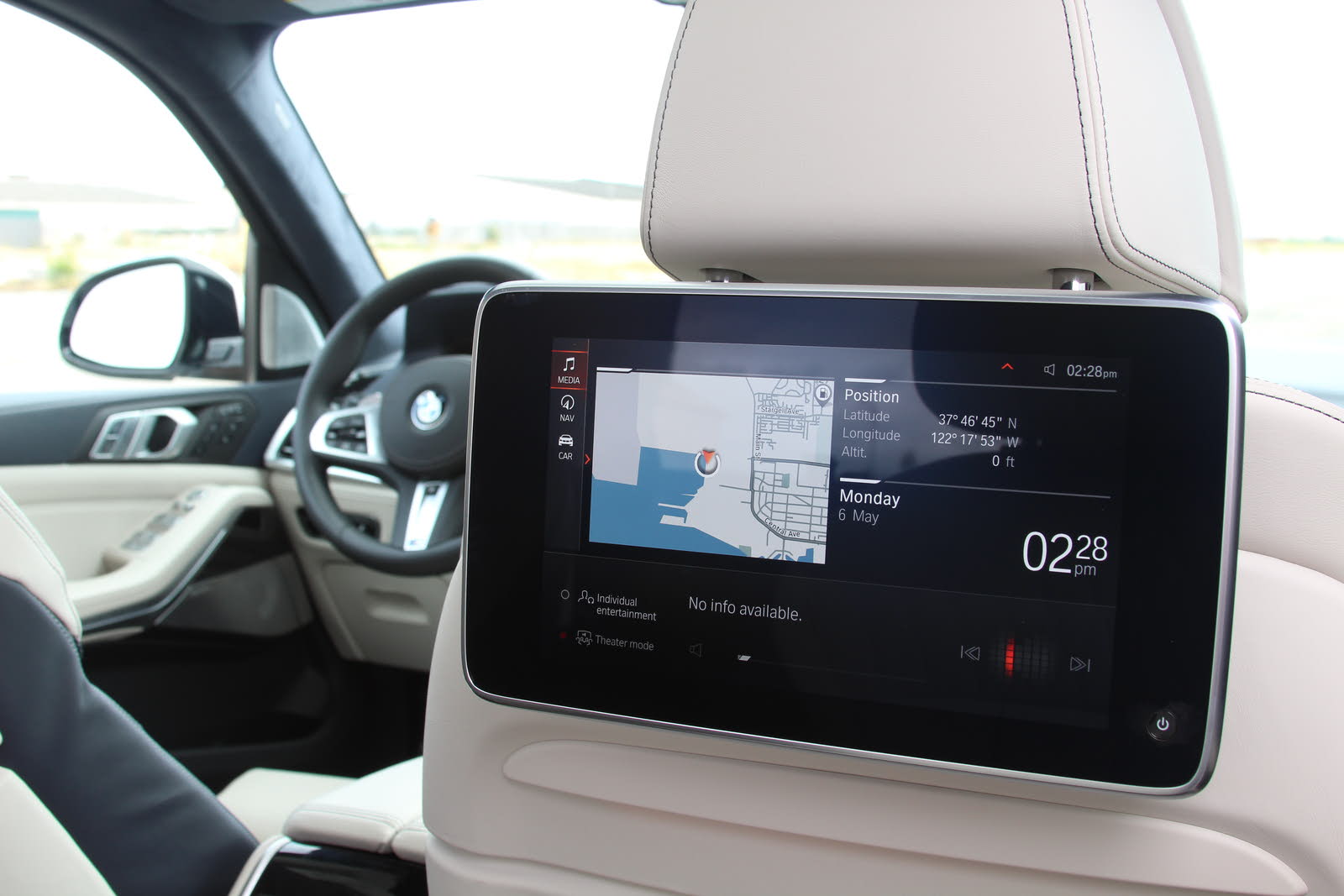 The iDrive system has been massaged a bit, and the result is very BMW—this is an evolution rather than a revolution. iDrive is still a little clunky, but it’s easy enough to use and has some beautiful, sharp screens and cameras. It can also be updated over the air, meaning you won't have to make trips to the dealership for software recalls. A personal highlight for me was the head-up display, which is large enough and comprehensive enough to make traditional gauges almost redundant.

The rear-seat entertainment is another highlight, offering individual control for each screen, as well as joint theater mode. Direct your passengers to look at the navigation screens, and you won't have to hear questions like “How much further?” or “Are we there yet?” ever again. There are more USB-C ports than you can count, including 4 for the second row alone, and if you get the second-row captain’s chairs, every seat gets heat.

But there are some low points as well. Gesture control is still a finicky gimmick that works only around 60% of the time, and while the low-speed autonomous-driving system is an absolute blessing in stop-and-go traffic, the high-speed version is a bit of a mess. It darts and bounces around the lane, gets tricked by shadows, and when I tested it in the X5, the car actually followed a vehicle changing lanes in front of me. This is a feature I would strongly suggest avoiding. 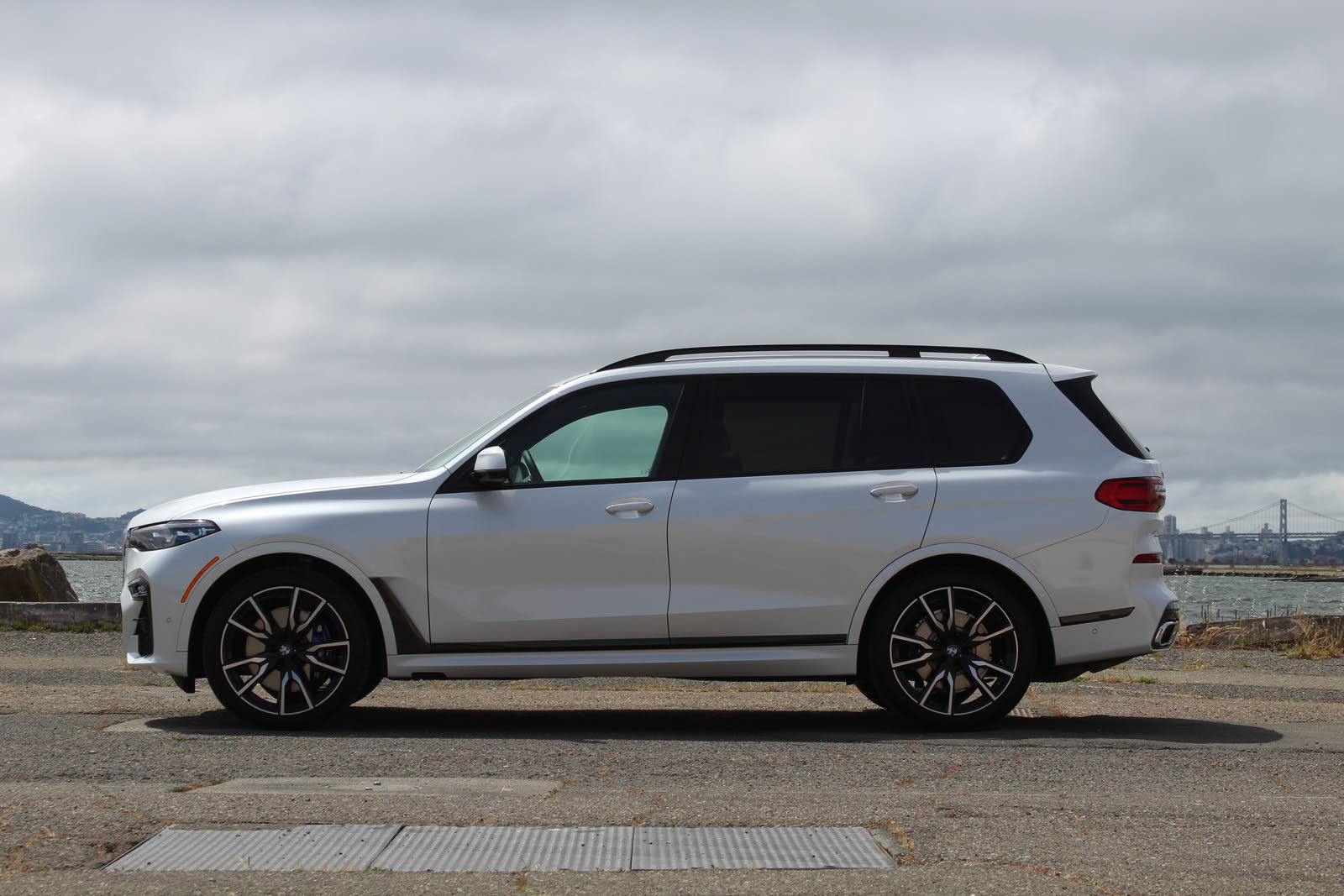 Safety is handled by parking sensors front and rear, a forward-collision warning system with automatic emergency braking, a blind-spot monitoring system, and a lane-departure warning system. To increase your safety, the Driving Assistance Pro package ($1,700) will add adaptive cruise with lane-keep and lane-change assist, evasive steering, and front cross-traffic alert, along with BMW’s automated driving system. A $700 Parking Assistance package will also add a 360-degree camera and an automated parking system.

The 2019 BMW X7 has yet to be tested by the government’s National Highway Traffic Safety Administration (NHTSA) or the independent Insurance Institute for Highway Safety (IIHS). Its long list of standard and optional safety features bodes well for scores, but with its increased height and weight, I’d pay attention to rollover tests.

Braking also concerns me. Distances for the X7 have not yet been released, but with the much lighter X5 taking 120 feet to stop from 60 mph, you can expect to extend that quite a bit with the X7. 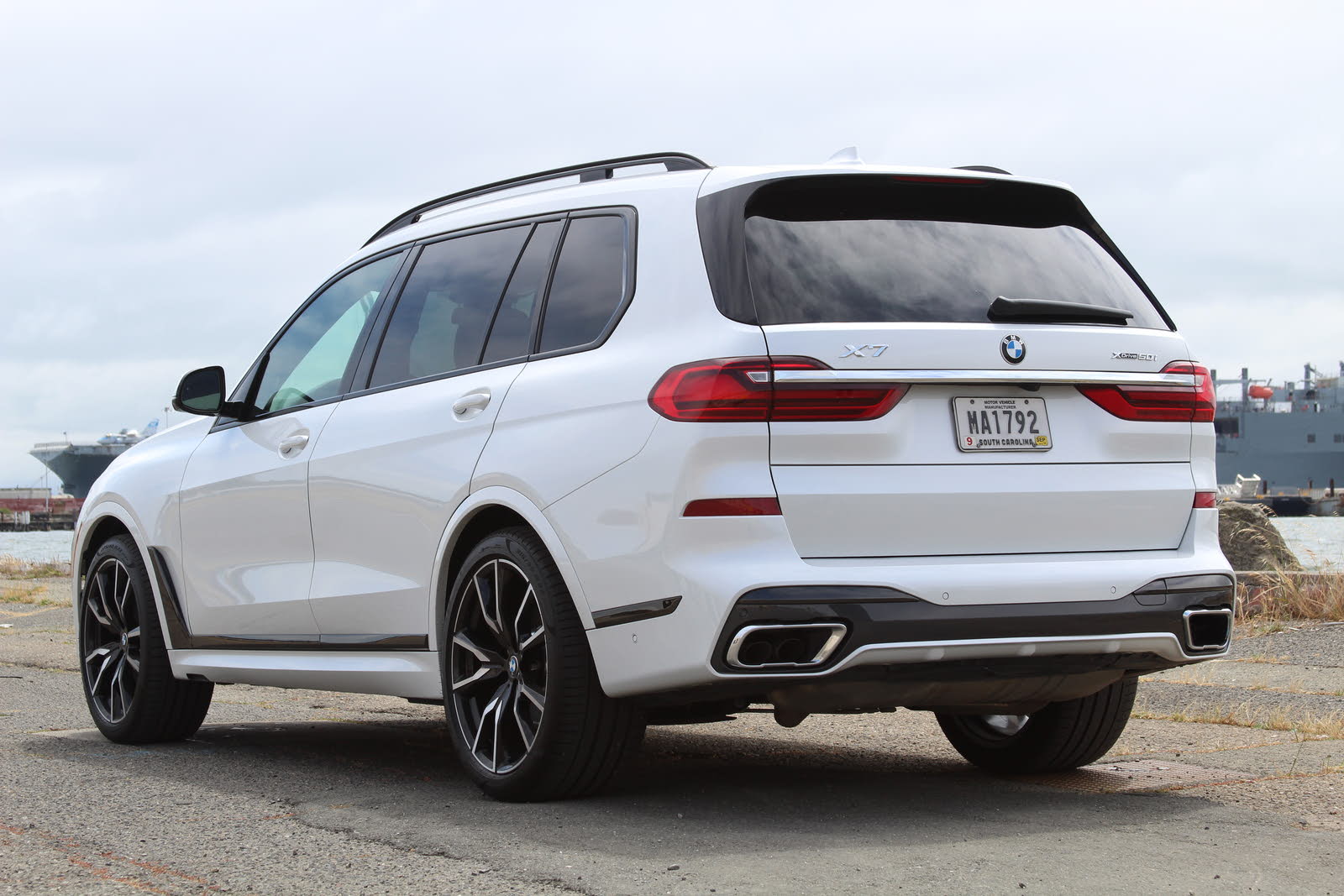 If you’re looking at the BMW X7 as an alternative to options like the XC90 or the Q7, it will very simply cost you more, even in its cheapest configuration. But the X7 offers a higher level of luxury than those competitors, especially when you start wandering through the options list. Certainly, any vehicle that pushes so far past the $100,000 mark can’t exactly be called cost-effective, but with the level of quality and luxury the X7 is capable of providing, it manages to punch well above its weight—so much so that it could be considered a frugal alternative to more exotic upscale marques like Bentley. With that in mind, the X7 might just be the most cost-effective option out there.

Looking for a Used X7 in your area?

Can I Export The Car Out Of USA

this is my favourite car because bmw x7 is best car for me because this car have 12 seat.