Part SUV, part coupe. New mashups like the BMW X4 might offer less utility than traditional crossovers, but they make up for it with superior comfort and driving dynamics. 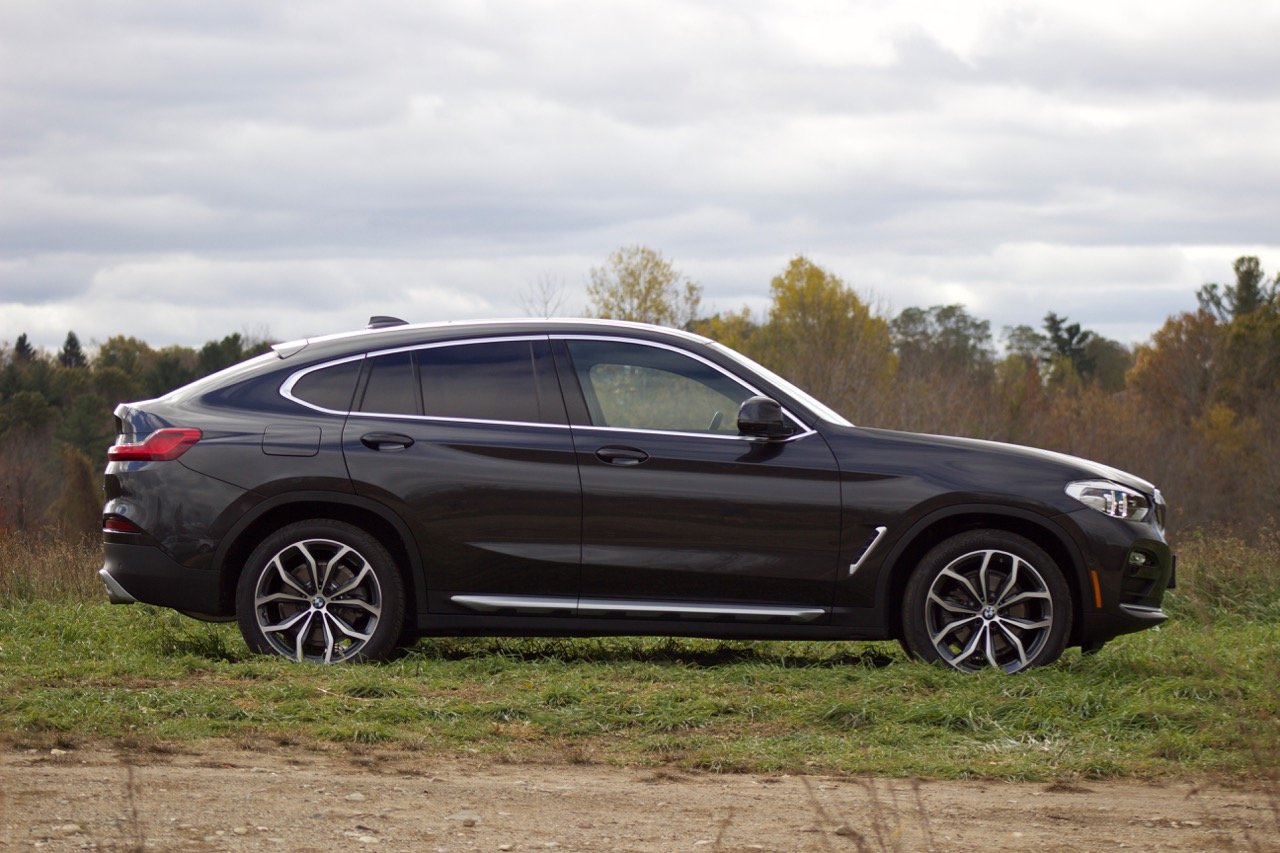 From fastback sedans to coupe-inspired crossovers like the BMW X4, automakers have spent the last decade forging new ground with “in-between” vehicle segments.

BMW classifies the X4 (and the larger X6, for that matter) as a Sport Activity Coupe. If you are up on your corporate jargon, that might seem like a sly rebranding of Sport Utility Vehicle, but minus the Utility. That's not a coincidence. BMW came up with this terminology when it introduced the X6 for the 2008 model year. It hints at "SUV," but doesn’t commit to the utility, so BMW can suggest versatility without actually delivering on that promise.

The first-generation X4 was introduced for the 2014 model year. And despite my derision of the SUV-coupe idea, BMW would not have introduced the second generation this year if it were not popular. It will compete with a similar fastback SUV, the Mercedes-Benz GLC-Coupe, but in a broader sense, the X4 has very tight competition. Other popular compact luxury SUVs include the all-new 2019 Acura RDX, Audi Q5, Porsche Macan, Jaguar F-Pace, and Lexus NX. The X4 even has a competitor in its own lineup—the similarly sized X3.

But the 2019 BMW X4 is slightly longer, taller, and wider than the model it replaces. BMW hopes this will result in a bit more cabin space and an actually usable rear seat. Will it be enough to make buyers choose the X4 over its competition, even from within its own lineup? 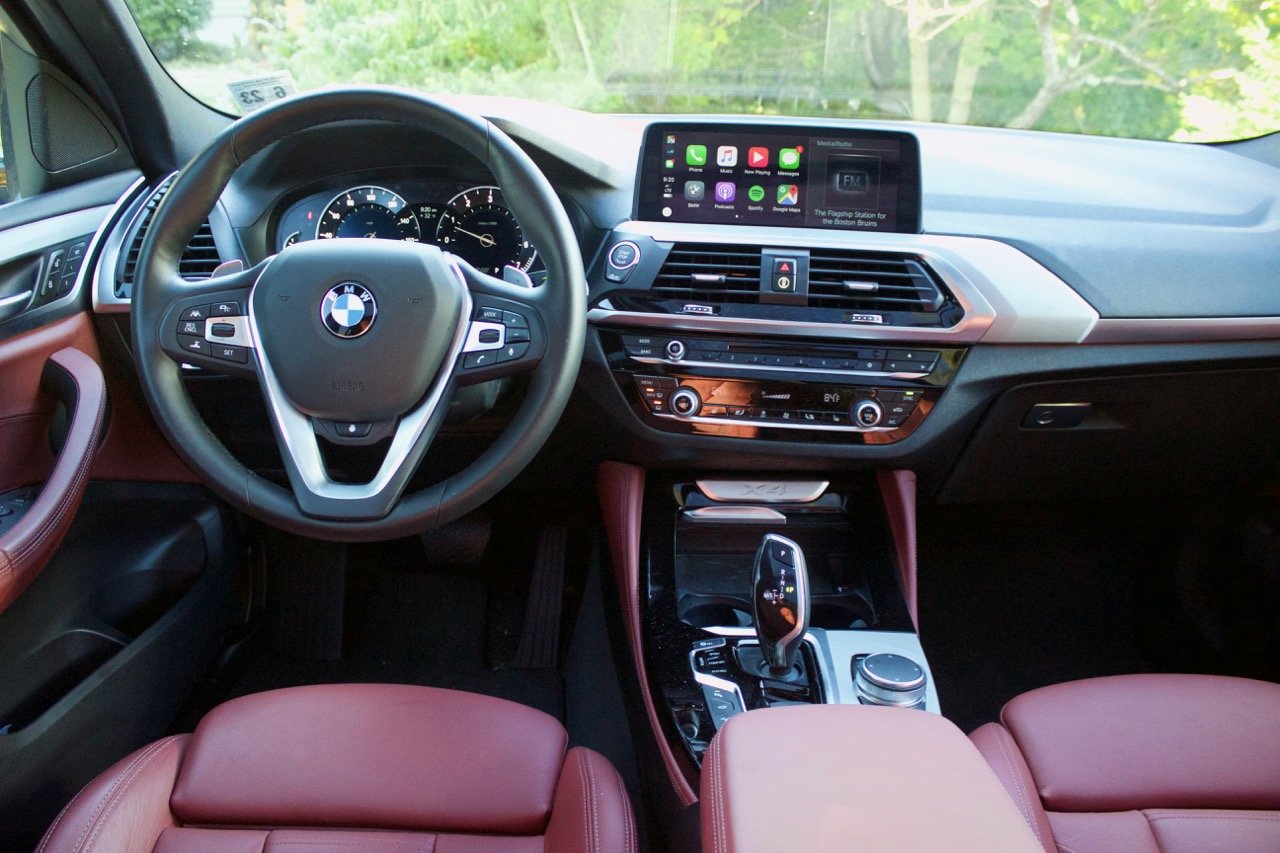 Considering the success of the original X6, the first X4 was inevitable. It followed the similar formula of tall ride height, pronounced fenders, and sloping roof. The problem was, committing to a downsized version of the X6 meant function had to give way to form, and backseat headroom and cargo space suffered.

But with the 2019 redesign, there’s a notable change to the X4's profile. It has a less-pure coupe profile and more of a sloping hunch, like a Kia Stinger or first-generation Porsche Panamera. Paired with its slightly larger footprint, the new X4 does provide more interior space and cargo room.

The X4 is available in either the xDrive30i trim or the more performance-oriented M40i. We drove the xDrive30i, which comes decently equipped, but needed some option packages to make it feel truly luxurious. Standard features include 19-inch wheels, fog lights, power-folding heated side mirrors, a panoramic moonroof, power rear hatch, and rain-sensing wipers.

Our test model included the optional Tacora Red leather interior and a series of packages including the Convenience Package and Premium Package. The Comfort Package adds keyless entry, lumbar support for the front seats, and one year of satellite radio. The Premium Package features a heated steering wheel, heated front seats, head-up display, and gesture control for the iDrive infotainment system. 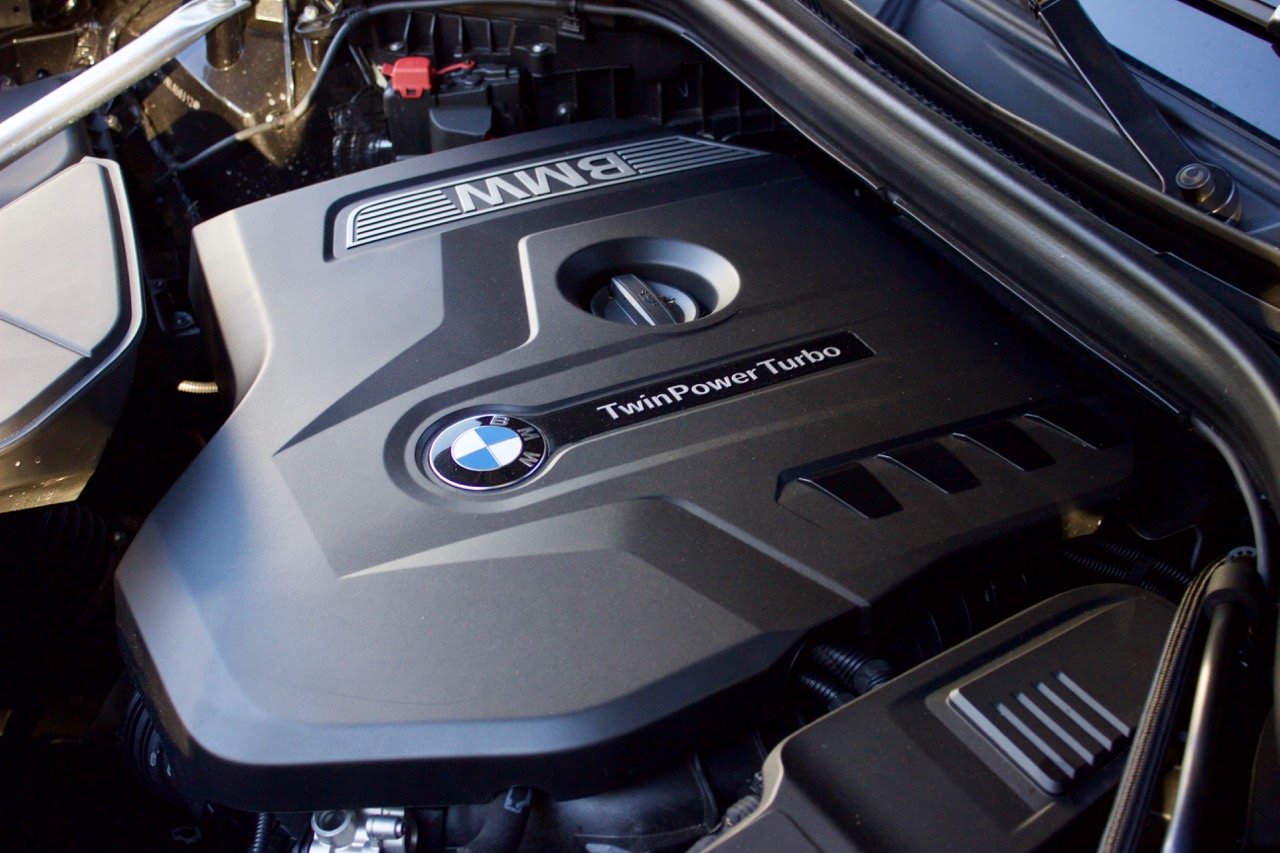 With the X4, the trim name indicates the engine, though automakers have gotten away from closely tying it to displacement. In the past, a name with “30” in it would have indicated a displacement of 3 liters. Thanks to turbocharging, automakers are doing more with less, but putting a smaller number on the back of your car simply won’t fly with luxury brands. So now it’s more closely tied to the engine's output level rather than its physical size.

The xDrive30i we drove features a 2.0-liter turbocharged 4-cylinder engine. It makes 248 horsepower and 258 pound-feet of torque. Moving up to the X4 M40i provides a 3.0-liter TwinPower turbocharged 6-cylinder putting out 355 horsepower and 365 pound-feet of torque. Regardless of engine choice, power is put through an 8-speed automatic transmission to BMW’s xDrive all-wheel-drive (AWD) system. The inclusion of xDrive as standard equipment is a strong selling point for this car and allows it to deliver confident handling in all manner of inclement conditions.

The X4 also comes standard with an M Sport suspension, which provides a combination of soft ride and responsive handling. Moving up to the M40i adds the adaptive M suspension, and our test model came with Dynamic Damper Control (a $1,000 option). The suspension systems, steering response, and throttle/shift mapping can all be tweaked using the Dynamics Driving Control system. Operated via a row of buttons down to the left of the shifter, you can select EcoPro, Comfort, Sport, and Sport+ drive modes. As the name suggests, EcoPro is geared toward optimizing efficiency, Sport and Sport+ are all about performance driving, and Comfort strikes a balance of athleticism and a smooth ride.

So much of what makes the X4 a viable option for driving enthusiasts is its chassis and performance tech. For commuters who are really into carving corners and brisk acceleration, the X4 is far more engaging than much of its competition.

Of course, if you want more performance, you can opt for the X4 M40i and its 0-60 time of 4.6 seconds (compared to 6.0 with the xDrive30i). The M40i also enjoys upgraded M Sport brakes and the upgraded suspension. The M40i has the cornering ability and acceleration to earn at least a piece of the vaunted M badge. Some will scoff that BMW is watering down the M brand with such vehicles, but it’s just keeping up with the similar practice from Mercedes-Benz and AMG-badged vehicles. The M40i proves BMW doesn't have to compromise when it comes to crossovers and performance.

And while the M40i is certainly an exciting driver’s crossover, the xDrive30i is a well-rounded machine. It strikes that fantastic blend of performance and comfort, and much of that can be tweaked with the push of a button. That said, I wish the braking on the xDrive30i was more aggressive. With the M40i, its large brakes can take a big bite, but with the xDrive30i, emergency braking requires planting the pedal to the floor.

The xDrive30i is not only more well-rounded, it's the more efficient of the two X4 variants, returning fuel economy of 22 mpg city, 29 highway, 25 combined. In our week of mixed city and highway driving (with a bit more highway miles than city) we observed fuel economy of 26 mpg. If you opt for the M40i, fuel economy falls to 20 mpg city, 27 highway, 23 combined. 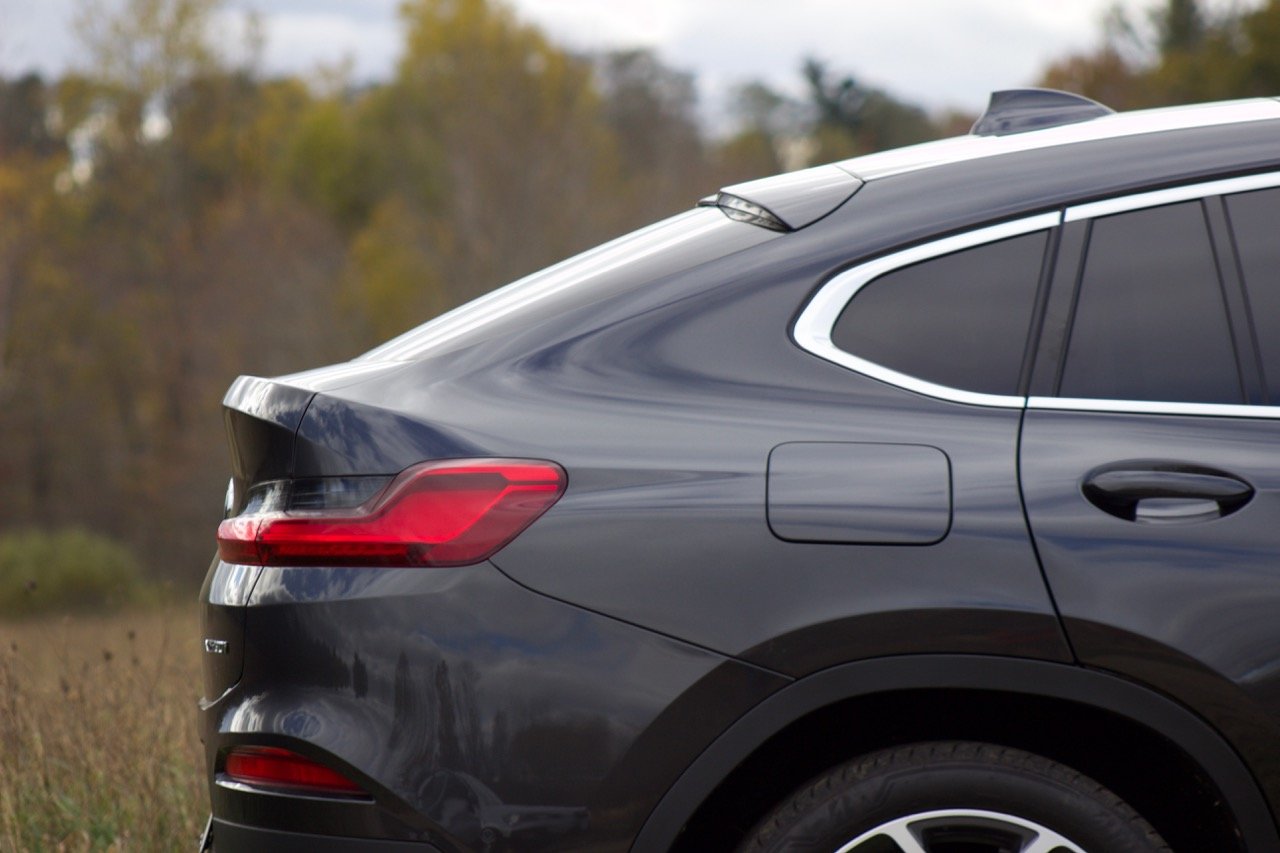 So, what about the hunchback profile? Honestly, it's the best of all the changes from the first-generation X4 to this one. The taller hunch provides decent backseat space and more cargo volume. Front headroom is plentiful, and rear headroom makes the backseat actually usable for adults. It’s not like a 6-plus-foot person can stretch all the way out, but it’s a serviceable place to sit for trips up to an hour.

The X4 also makes good use of the space it has, with compartments on either side of the rear cargo area. The load floor to the cargo area lifts completely and has a support arm to keep it up, a nice upgrade from the norm, where you have to hold that flap open while trying to access under-floor storage. 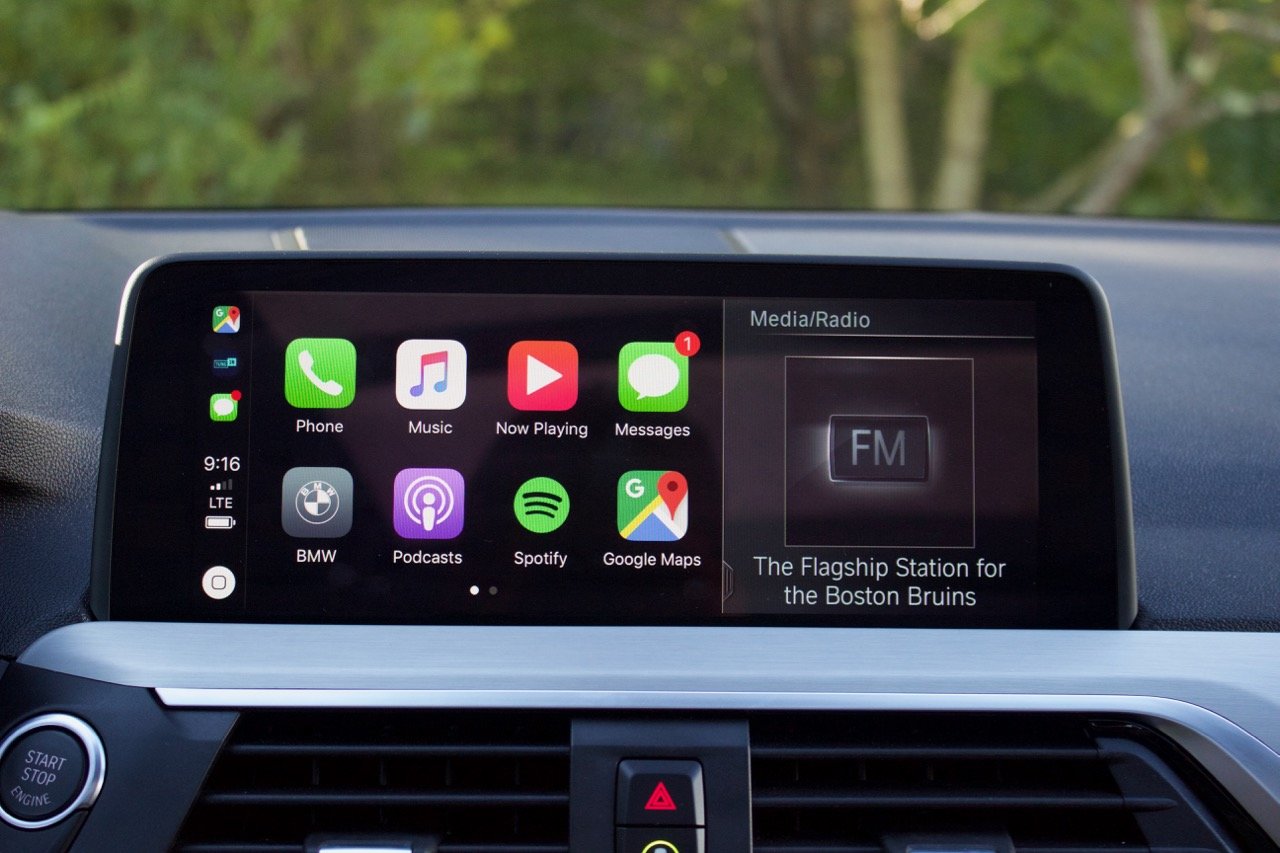 As mentioned already, the X4 comes standard with a 10.25-inch iDrive infotainment system. This new form of iDrive features sensible menu layouts, but the best aspect of the update is that it’s actually a touchscreen. In the past, BMW forced you to use its proprietary dial control in the center console. While the dial eventually became easy to use, it was never very intuitive. Besides, there’s no comparing it to the ease-of-use that comes from a simple touchscreen.

The available Premium Package on our test model added the aforementioned heated seats and heated steering wheel, but also one of the best head-up displays we’ve used this year. It’s a color display and can project everything from vehicle speed to posted speed limit to radio station. It provides all this information in the driver’s line of sight on the windshield without being overly distracting.

The Premium Package also features gesture control, which is exactly what it sounds like. You can wave your finger in a circle like a wizard to turn the volume up or down. Waving two fingers can change the radio station, and many more functions can be customized within the iDrive menus.

Our test model also featured wireless smartphone charging (a $400 option) and standard Apple CarPlay. With the latest iOS update, CarPlay now includes Google Maps, and the employment of the touchscreen in iDrive finally makes it as easy to use as Apple engineers originally intended. 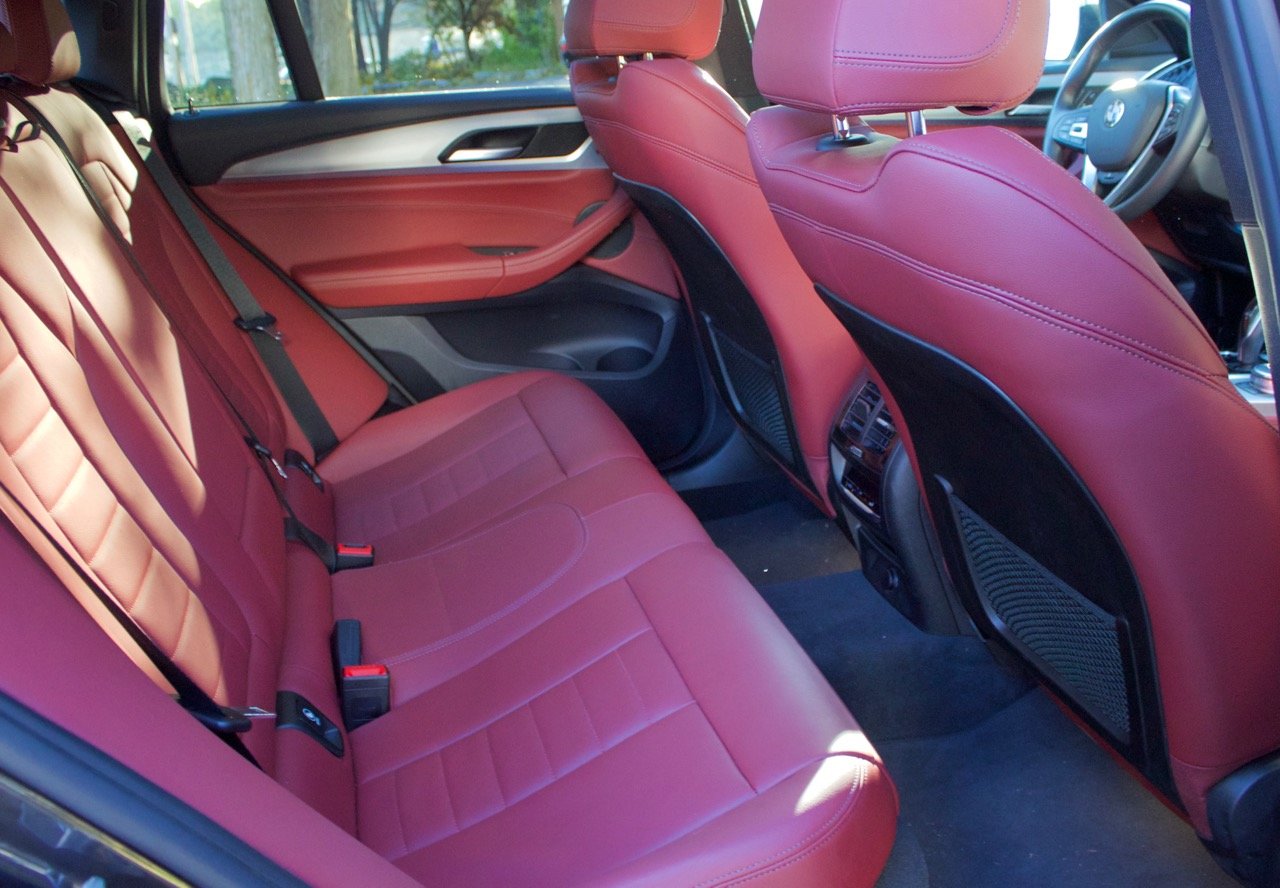 Standard safety features include a reversing camera, front and rear parking sensors, and a full array of front- and side-impact airbags.

Finally, our test model included the Parking Assistance Package, which provides a 360-degree camera, self-parking function, and the very cool 3D camera system. This actually projects the images of the surround-view cameras in three dimensions and inserts a little digitally constructed X4 in the middle. Rotating the iDrive dial spins the mini X4 and the world around it. I'm not quite sure how functional it is as a safety feature, but it certainly has some novelty value. 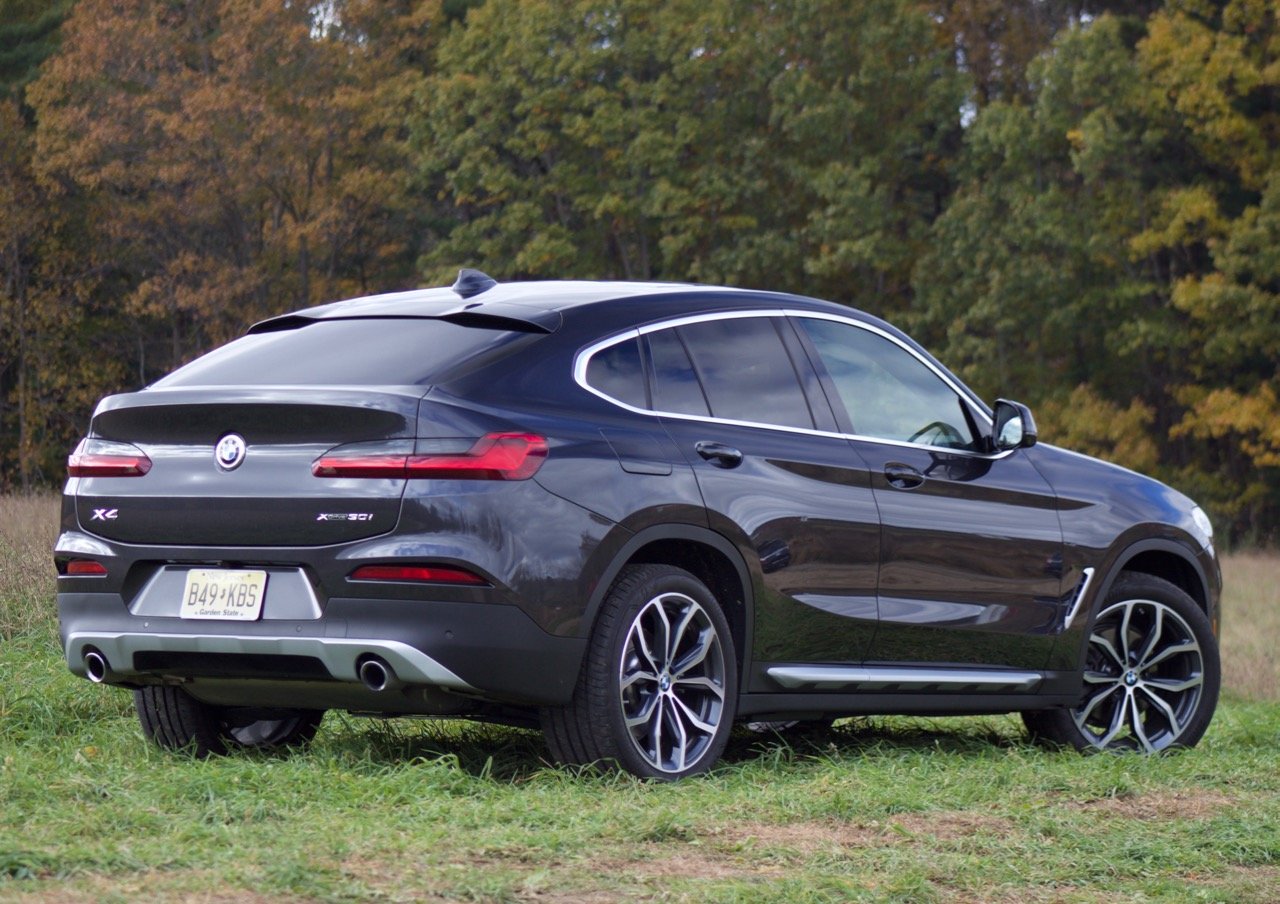 That's even more than the base MSRP of the X4 M40i, which starts at $60,450. And of course, just like the xDrive30i, the M40i can be outfitted with plenty of options and packages, which can add thousands to the final price.

But if you're shopping compact luxury SUVs, such pricing will not be a shock. The fact is, BMW introduced the second generation of the X4 for a reason; the first one sold well.

No one is forcing people to buy these coupe/SUV mashups, and no one is being tricked by their branding. Buyers know how much they cost and what their pros and cons are. The public has spoken with its collective wallet.

So why choose an X4 over an X3? While the X3 might have more cargo space, the X4 has standard all-wheel drive and respectable performance. It might be more helpful to think of the X4 as an alternative to a performance sedan. In that way, the X4 is ideal for the commuter who wants some space and ground clearance and actually cares about driving.