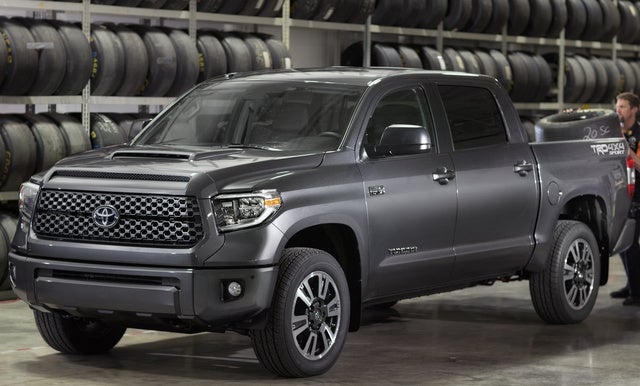 Average user score
4.9 ⁄ 5 stars
Based on 18 reviews
Review by Grodriguez323 — It’s a great truck for me personally wasn’t missing anything it was pretty good explained the features for the truck, compare to similar pick trucks with the same miles I believe it was a awesome deal... Read more
Review by Bnjmnc75 — I am a Toyota fan and I have owned several Tundras these trucks are great no complaints just compliments Read more
Review by Anthony — Love my vehicle . Been waiting for the right time and it finally showed up. WOOHOO!!!! Read more

The current Toyota Tundra debuted in 2014, although the basic design of this version of the full-size pickup has been around since 2007. For 2018, the Tundra gets some styling updates as well as an exciting new TRD Sport trim that adds both styling cues and performance upgrades. Certain trims receive updated mesh grilles, while a new billet-style grille will grace the Limited trim as well as the 1794 Edition—a Western-themed trim named after the founding year of the oldest cattle ranch in Texas, from which Toyota purchased land for the Tundra assembly plant. Limited, Platinum, and 1794 Edition trims also now come with LED headlights, daytime running lights, and fog lights.

Base Tundras will be equipped with the 4.6-liter V8 engine with an output of 310 hp and 327 lb-ft of torque, while upper trims (including the new TRD Sport) get the 5.7-liter iForce V8, rated at 381 hp and 401 lb-ft. The Tundra is available in both rear-wheel (RWD) and 4-wheel drive (4WD). Depending on engine, cab size, bed length, and drivetrain choice, the Tundra can haul between 1,400 and 2,080 pounds of payload or tow between 6,400 and 10,500 pounds. For comparison, rivals from the Big Three American manufacturers offer up to 12,000 pounds of towing capacity. It’s also worth noting that the Big Three also offer base V6s in their big pickups with similar performance and better fuel economy than the Tundra’s smaller V8.

In addition to the engine and drivetrain options, Tundra buyers can select from several body styles—the Regular Cab with a long 8.1-ft bed, the Double Cab with rear-hinged doors and either a 6.5-ft or 8.1-ft bed, and the CrewMax with a 5.5-ft bed. Available trims include the SR, SR5, Limited, Platinum, 1795 Edition, TRD Pro, and the all-new TRD Sport. The CrewMax configuration comes standard on the Platinum and 1794 Edition trims.

On the interior, the controls for the Tundra are well laid out and easy to operate, and the higher trim levels offer a truly premium-feeling space. The center console is large enough to hold a laptop, and some Tundra models get extra storage space under the seats. The base SR trim comes with smartphone connectivity, a 6.1-inch touchscreen, a USB port, Bluetooth capability, and voice-recognition functions. Next up, the SR5 trim adds a 7.0-inch touchscreen and is available with a TRD Off Road package, while the Limited trim gets leather upholstery, heated power-adjustable front seats, navigation, and dual-zone climate control. The Platinum trim receives parking sensors, front-seat ventilation, a 12-speaker sound system, a moonroof, and blind-spot monitoring with rear cross-traffic alert. The Western-themed 1794 Edition adds mainly appearance upgrades such as wood-style trim, and the TRD Pro trim gets performance items like a dual exhaust and Bilstein shocks as well as unique interior and exterior styling.

Toyota has added the Toyota Safety Sense-P suite of convenience and safety features as standard equipment for the 2018 Tundra, featuring lane-departure warning, a pre-collision system with pedestrian detection, automatic high beams, and radar-based adaptive cruise control. The 2017 model received a 4-star overall rating from the National Highway Traffic Safety Administration (NHTSA), while the Insurance Institute for Highway Safety (IIHS) gave it top Good scores for most tests and an Acceptable rating in the tough small-overlap test.

The Tundra is vastly outsold by its American rivals, and it’s likely going to be the same story with this only slightly revised 2018 model. Trucks from the Big Three outperform the Tundra in most areas that really count for pickup buyers, but the styling changes and the new TRD Sport trim should at least keep the Tundra a relevant choice until it can get a more significant refresh.

Have you driven a 2018 Toyota Tundra?
Rank This Car

My Truck Has A Lien What Are My Options When Selling?

I want to purchase a diesel truck; I have a lien on my truck, what are my options when I want to sell my truck and purchase another?

Are the guys that advertise the price, what you see is what you pay? Is it the same old bull @!#$. Hidden fees and taxes? Simple yes or no.

What Does Cpo Stand For?

How big of truck would get the job done, and how much weight can it pull