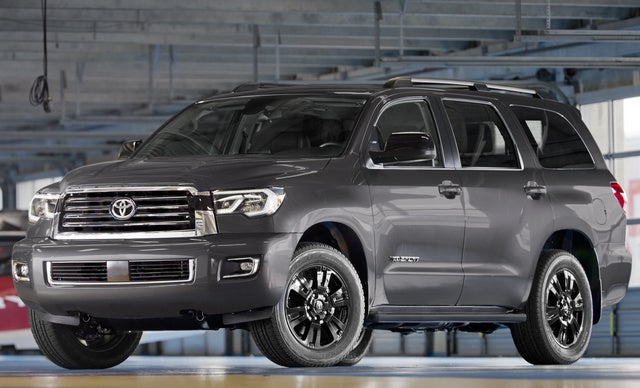 The current Toyota Sequoia full-size SUV hasn’t seen much in the way of updates since it first launched in 2008, unlike the related Tundra pickup that got a noticeable update for 2014. For 2018, however, the Sequoia receives a welcome refresh that adds standard LED headlights, LED daytime running lights, and LED fog lights across the lineup. Each trim level also comes with a unique grille insert, although the biggest news for 2018 is the introduction of a TRD Sport trim. In addition to the TRD Sport trim, the Sequoia remains available in SR5, Limited, and Platinum trims.

Under the hood of the 2018 Sequoia is the familiar 5.7-liter iForce V8 engine, also seen in the Tundra pickup, which is coupled with a 6-speed automatic transmission for an output of 381 hp and 401 lb-ft of torque. The Sequoia comes in rear-wheel-drive (RWD) or four-wheel-drive (4WD) configurations and gets fuel-economy figures of 13 mpg city, 17 highway, and 15 combined with RWD and 13, 17, and 14 with 4WD. It can tow up to 7,400 pounds and claims a 0-to-60 time of 6.7 seconds, which is quite impressive for a vehicle this massive.

The Sequoia comes with an independent double-wishbone suspension at both the front and the rear, which the range-topping Platinum trim upgrades to an active variable air suspension. While the new TRD Sport trim doesn’t add anything in the power department, it’s hardly just a flashy trim package, boasting TRD-tuned Bilstein shocks and beefy anti-roll bars at both front and rear.

2018 updates for the Sequoia’s interior include a revised gauge cluster, a 4.2-inch instrument-panel display, and a new center console. In general, the cabin is heavy on plastic but is fairly roomy, and the second row can slide up or back several inches for either more legroom or more cargo space. Limited and Platinum trims come standard with power-folding third-row seats and a power liftgate, and second-row captain’s chairs are available. The base SR5 trim receives a 6.1-inch touchscreen, Toyota’s Entune infotainment system, a power-adjustable driver’s seat, and Bluetooth streaming audio. Moving up to the Limited trim adds leather seats and heated front seats, while the Platinum trim gets a new wood-like interior trim, navigation, a rear-seat entertainment system with a 9.0-inch screen, and ventilated front seats.

Based largely on the older Tundra model, the Sequoia has a fairly narrow appeal. It has serious towing capability, but its fuel economy is pretty poor and there are cheaper and more practical vehicles even in Toyota’s own model lineup that will do a better job of hauling your family and belongings. Even so, the 2018 styling updates and the addition of the new TRD Sport trim should at least keep the Sequoia relevant enough until it undergoes a more comprehensive refresh.

What's your take on the 2018 Toyota Sequoia?

Users ranked 2018 Toyota Sequoia against other cars which they drove/owned. Each ranking was based on 9 categories. Here is the summary of top rankings.

Have you driven a 2018 Toyota Sequoia?
Rank This Car