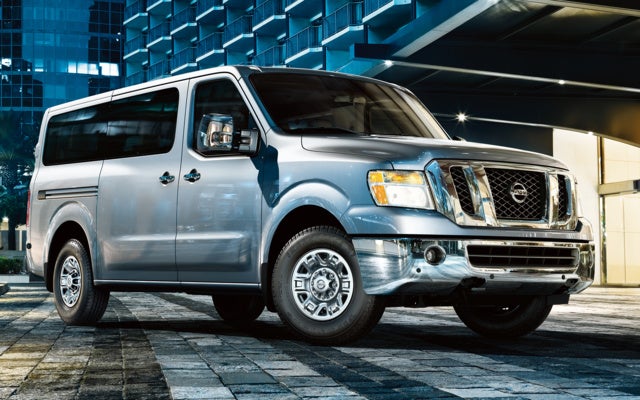 The Nissan NV Passenger is built upon the brand’s NV-series of vans as an answer to a quintessential American need: a large, 10+ passenger vehicle capable of large groups places in reasonable comfort. A dying breed, it adopts the traditional body-on-frame layout of the Chevrolet Express and GMC Savana rather than the newer unibody construction of the Ford Transit or Mercedes-Benz Sprinter. And the short roof and long hood—the latter of which is a real rarity in the van market—probably make the NV Passenger natural to anyone used to driving a large SUV. The long hood also helps with serviceability.

Competitors make vans with varying wheelbases to accommodate different numbers of passengers — up to 15 — but Nissan hits the meat of the market with a single NV Passenger variant that holds up to 12 passengers across four rows on its 3500 HD chassis. For easy access, passengers enter and exit via a large sliding door on the right side of the vehicle, as opposed to the dual hinged doors seen on the GM offerings. There are still barn doors at the rear, and Nissan says the one on the left is slightly shorter to allow for less intrusion into traffic during curbside loading and unloading. The last row, which seats four-across, is split into two sections that can be individually removed, and even the front passenger seat folds down to create a flat workspace.

The NV Passenger comes in three basic trims. 3500 HD S starts with the V6 engine, cloth upholstery with vinyl wear panels on the sides of the front seats, a 12-volt power outlet up front, four speakers, and 4-way manual front seats. And for 2018, there’s a standard 5.0-inch infotainment system with Bluetooth, a text-messaging assistant, and USB connectivity.

The NV Passenger is built to be a workhorse in terms of ferrying people back and forth. It is probably the best incarnation of the traditional van on the market, backed by Nissan’s full 5-year, 60,000-mile warranty.

What's your take on the 2018 Nissan NV Passenger?

pickles69 We have the 2014 tall roof V8 Version of the NV2500. Some things steered us towards this over a Sprinter and a Promaster. First, legit, leg room. Your outer legs have all the stretch out room you want, unlike most other vans. Second, the warranty is fantastic. Third, the equipment.. we got nav (meh) backup cam (YEAH), power drivers seat (which is as good as a Volvo seat). The handling is solid, definitely truck-ish compared to the Transit which feels more car-nimble. Overall, ours has been nearly flawless with one issue with the sliding door- but otherwise, a very capable van.

Have you driven a 2018 Nissan NV Passenger?
Rank This Car