The Nissan Kicks is a crossover for shoppers who know they don’t need a car to drive off-road… or even be that sporty. But despite this, the Kicks is a pretty useful vehicle. 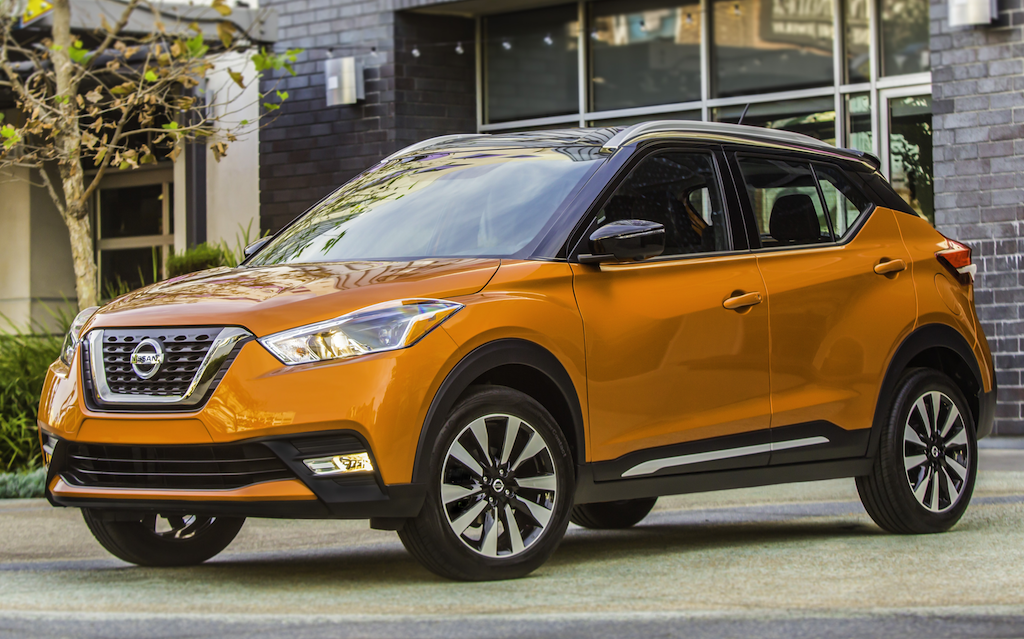 With the all-new 2018 Kicks, Nissan doesn't just stick to the formula, it steers headlong into it. And that makes it a more useful car than the Juke. The Kicks is less athletic, and it doesn’t even offer an all-wheel drive option. So how is it more useful? Because Nissan includes features that accommodate the daily commuter. 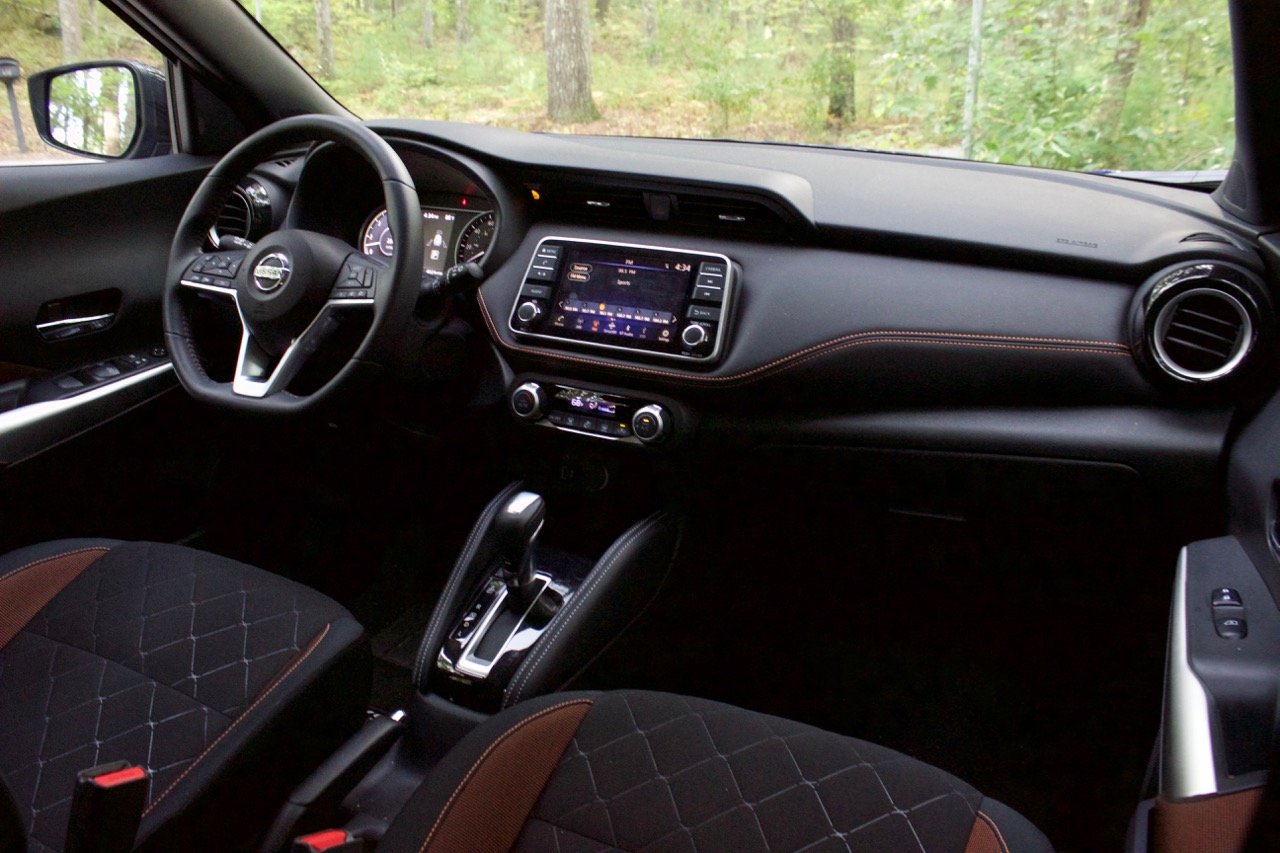 The Kicks features a few modern automotive design trends. There's the contrasting white roof, something that’s been around for a while (original Mini Cooper and Toyota FJ40), but is just starting to pick up steam. Another is the Kicks' blacked-out C-pillar. Nissan has incorporated this on vehicles like the Murano and Maxima, too, but I'm not a fan.

If I had to guess, Nissan's trying to copy the blacked-out C-pillars on Land Rover's Range Rover vehicles. But unlike the Range Rover’s column-like pillars, Nissan's cars and crossovers have massive C-pillars. So when they're blacked out, it looks like the designer is trying to feign a rear corner window. The result is awkward.

Luckily, the contrasting-color roof gives this car an upscale presence, even if its overall silhouette resembles a simple daily driver. In some ways, this is how small crossovers should look. Other new crossovers have long hoods that cover tiny engines, too-big fender flares, or oversize front-end design elements. These are all attempts to make a car-based crossover look more off-road capable than it really is. The cabin, however, is the emphasis for the Kicks.

Trims for the Kicks are S, SV, and SR. The base S comes standard with 16-inch steel wheels with covers, roof rails, a rear window wiper, and automatic headlights.

A big interior trend among automakers is a “floating” touchscreen. Automakers claim this is to help keep drivers’ eyes closer to the road, but the Kicks bucks this trend. The touchscreen in the Kicks is located down in the center of the dash, which is more visually appealing.

Moving up from the base S to the SV adds 17-inch aluminum-alloy wheels, push-button start, and a partially digital instrument panel. The speedometer on the right side of the panel is analog, but the center and left dials are actually a digital screen. This screen can be configured using the directional pad on the left side of the steering wheel.

Our test vehicle was the range-topping SR. On top of the S and SV’s features, the SR adds fog lights, LED low beams, a rear spoiler, and a dark satin chrome accent in the grille. Inside, the SR adds a leather-wrapped steering wheel and a helpful surround-view camera.

Shoppers looking to add a bit more content to the SR can pick up the SR Premium Package for $1,000. It upgrades the stereo to a Bose sound system with 8 speakers and an amplifier. This package also adds heated front seats, a security system, and Prima-Tex leatherette-appointed seats. 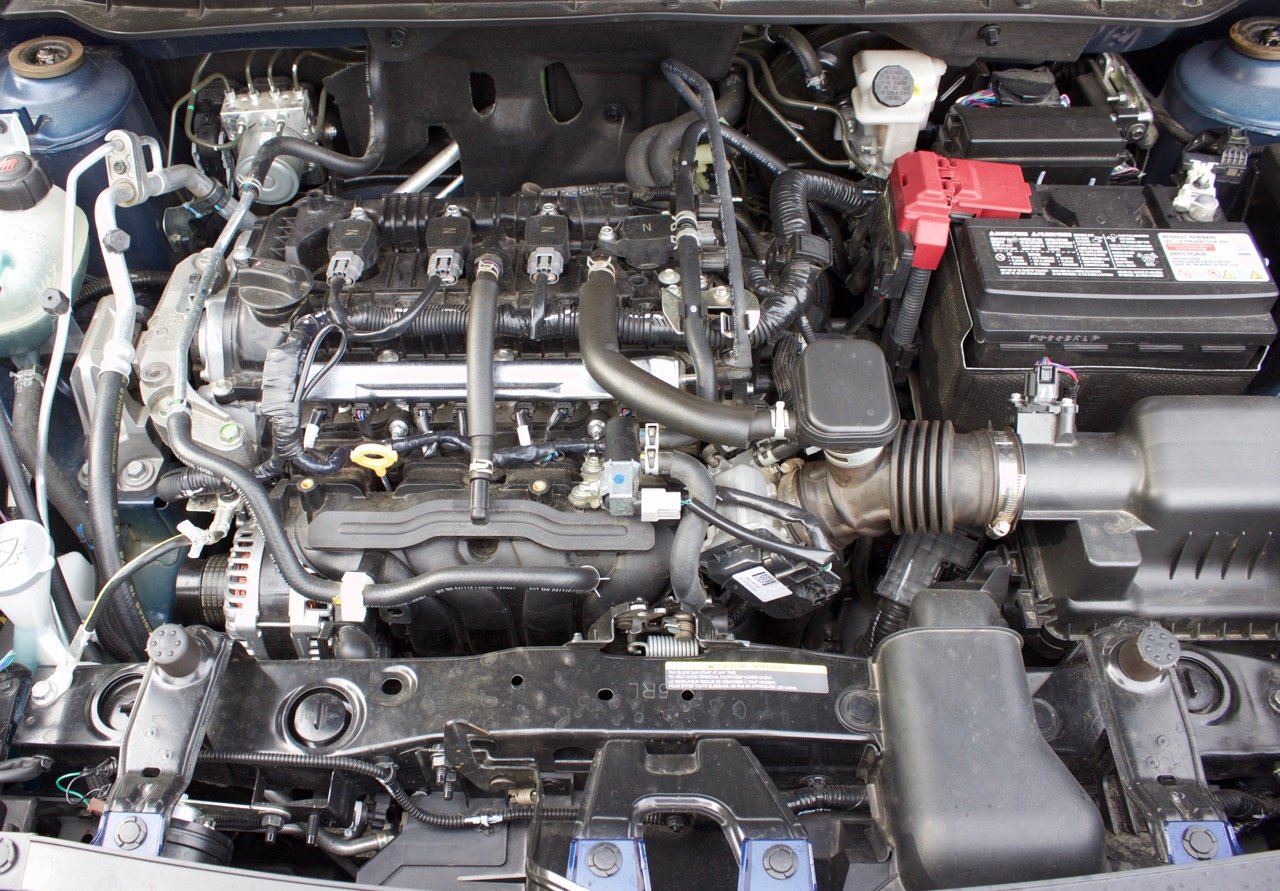 Under the appropriately sized hood resides a 1.6-liter 4-cylinder engine. It makes just 125 horsepower and 115 pound-feet of torque. From where we stand, that makes the Kicks quite underpowered. Consider some of the vehicles on the market with less power, like the Chevy Spark and the Mitsubishi Mirage. Considering Nissan calls the Kicks a crossover, that's not great company.

Power gets routed through a continuously variable transmission (CVT) to standard front-wheel drive. Full-stop. There is no all-wheel-drive option. This is just the latest in an alarming trend among hatchbacks posing as crossovers. The Kia Niro and Toyota CH-R are also part of this no-AWD trend.

As alarming as it is, it was also inevitable. Think about what crossovers really are: They’re high-riding hatchbacks. These vehicles have always been car-based, but with a bit more visibility on the road. They don’t offer anything in the way of added safety and very little in terms of space and capability, but it’s the idea that they do that has fueled the crossover craze.

Automakers recognize how superficial the crossover trend has been, so FWD-only mini-utility vehicles were always going to be the outcome.

But if you live in a tightly packed city or suburb, where it doesn't snow much, this formula is fine. Without the added weight and diminished efficiency of an AWD system, the Kicks’ little engine has decent acceleration off the line. This jump is great for navigating city blocks and jetting from stop light to stop light. The weight of the steering feels good around town, too, and it's complemented by the flat-bottom sport steering wheel.

But get out of that block-to-block city driving and the Kicks starts to show some weaknesses. The main one is its open-road acceleration. If you’re already moving and you step on the accelerator, nothing much happens except a lot of noise. Whether you're getting up to highway speeds or trying to overtake another car, performance is underwhelming and delayed. And while there’s an “S” (or “Sport”) button at the base of the shift knob, all it really does is turn off the overdrive, resulting in—you guessed it—more noise.

Depending on where you live, cornering could be an issue as well. Despite the weight of the wheel, turn-in is delayed, and the steering feel is rather numb once the car is cruising. There’s plenty of body roll, and driving down a curvy road quickly is a bit unnerving.

Yet somehow the Kicks pulls off the seemingly impossible double-sin of poor cornering ability and being harsh over bumps. Its steering might feel like a floaty old full-size sedan's, but at least you wouldn’t feel those massive potholes while driving an old Buick.

Of course, the endgame for the anemic engine and all that noise is decent fuel economy. EPA estimates for the 2018 Kicks are 31 mpg city, 36 highway, 33 combined. In a week of combined city and highway driving, our test car returned 33.6 mpg. 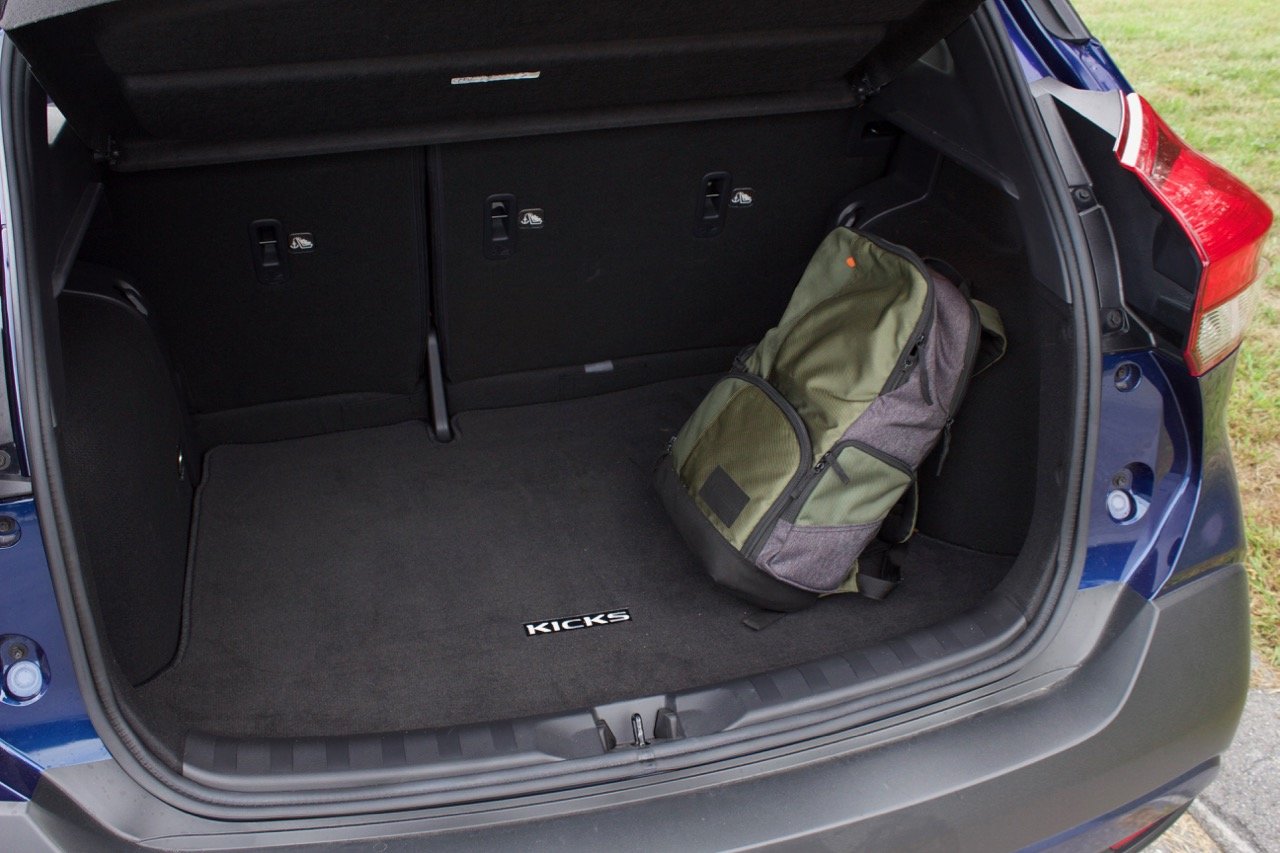 The benefit of the Kicks’ upright layout is plenty of head and shoulder room for the driver and front passenger. Sadly, there are modern SUVs that feel tighter behind the wheel than a sports car (such as the Lexus NX), but the front seats of the Kicks are spacious. And because the seating layout allows the driver to sit more upright, there’s enough legroom in the rear seats for another actual full-size human. I fit fine, and I’m 6 foot 3.

You'll find 25 cubic feet of cargo space behind the 60/40 split-fold rear seats. Drop those to access up to 53 cubic feet, which is on par with competitors like the Honda HR-V and Subaru Crosstrek. The Kicks doesn’t try for a flush load floor, either. The trunk's cargo area sits a few inches below the folded rear seats, which extracts maybe another cubic foot or two. Those numbers matter to people shopping for a new car.

The center cubbies are a little shallow in the Kicks, so Nissan also provides deep bottle holders in the doors. Even the rear doors get bottle holders, meaning Nissan didn’t have to squeeze one into the center of the rear seat. 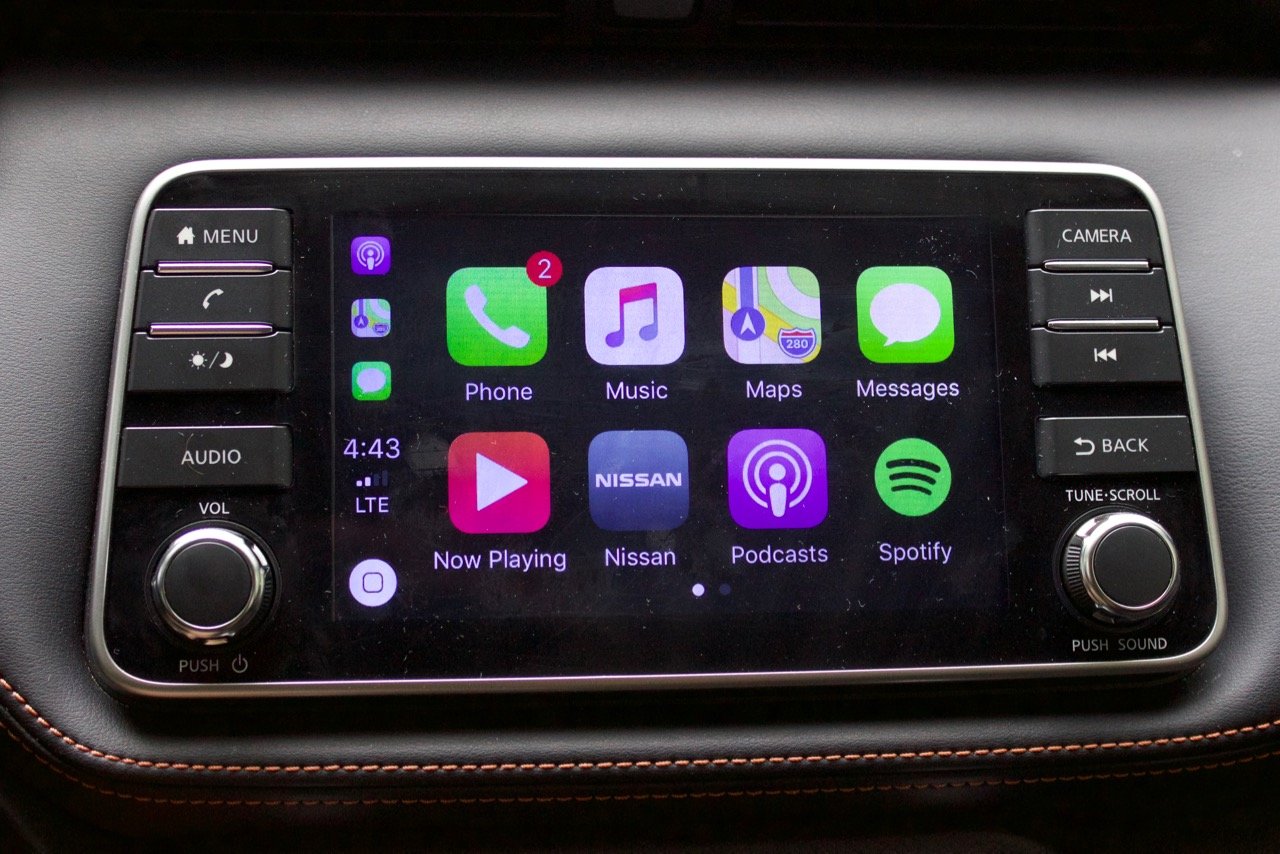 Not only is the Kicks’ touchscreen in an attractive location, but the standard infotainment system is straightforward and easy to use. Nissan has a solid menu layout, aided by traditional buttons on either side of the screen for the home screen, radio, phone, and more. No matter how clever automakers get, having tactile buttons makes using an infotainment system that much easier.

The infotainment system comes standard with Siri Eyes Free for iPhone users, and moving up to the SV or SR trim adds Apple CarPlay and Android Auto. For iPhone users running iOS 12, Apple updated CarPlay in September of 2018, so it now allows third-party maps apps—meaning Google Maps and Waze.

Unfortunately, I found that CarPlay became very buggy in daily use. I would plug it in and get the CarPlay menu for a few minutes, but once I opened my phone to use an app other than CarPlay, the system would kick my phone out. We’d be curious to hear if owners have this issue.

Nissan blended functionality and tech with its USB port placement. There’s the port in the center stack for connecting smartphone data (streaming audio, CarPlay/Android Auto, etc), but there are also dual USB ports for powering up devices in the center console, almost behind the driver’s right elbow. This clever placement allows front and rear passengers access. 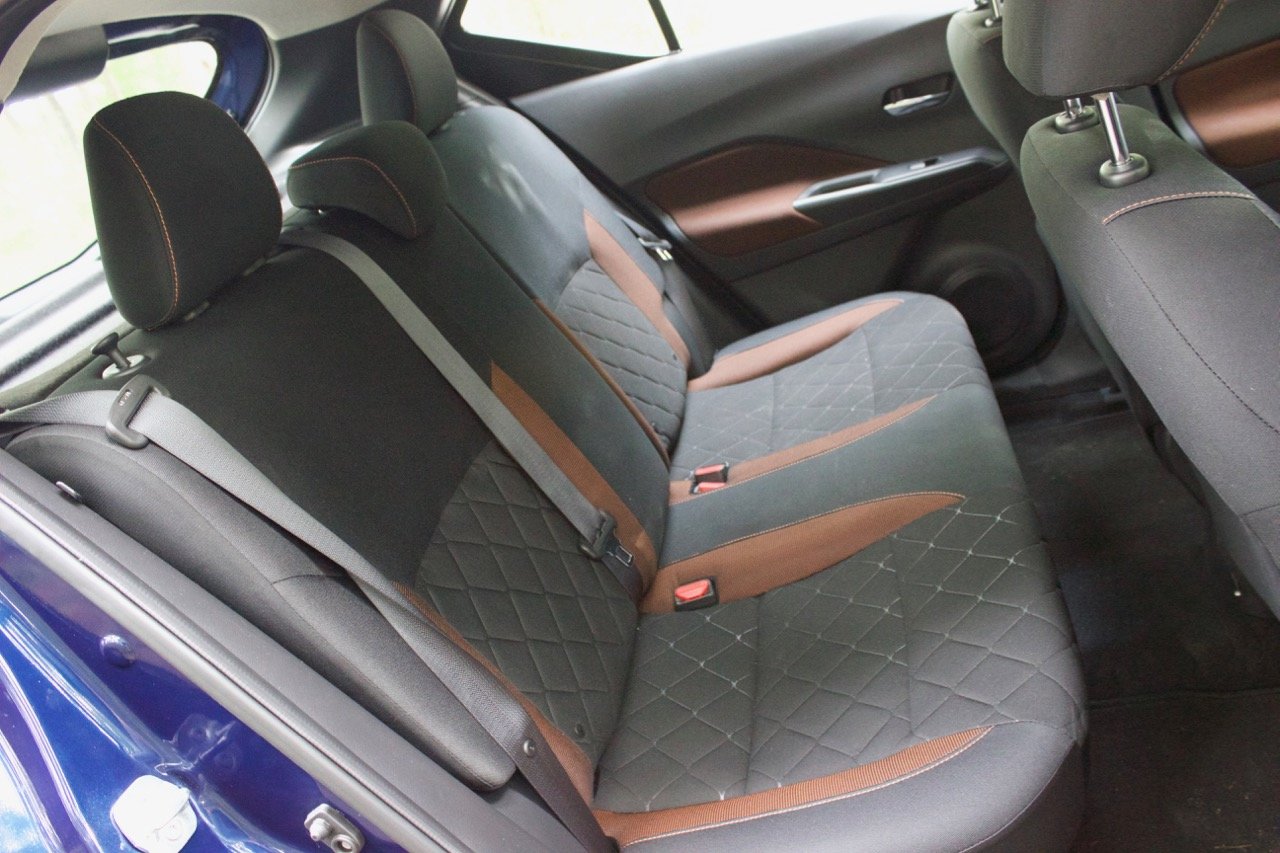 The Kicks comes standard with front and side airbags, a reversing camera, and the Easy-Fill Tire Alert system. Not many people carry around a tire pressure gauge with them. But the Easy-Fill system lets you know when the tires are at the correct pressure by honking the horn. It’s a quick and easy solution that eliminates the guesswork in filling up tires.

The Kicks also comes standard with automatic emergency braking, regardless of trim. Moving up to SV trim adds blind-spot monitoring and rear cross-traffic alert, while our SR adds the surround-view camera. With surround-view, you can press the camera button on the dash to activate various views, which is helpful for parking in tight spaces. 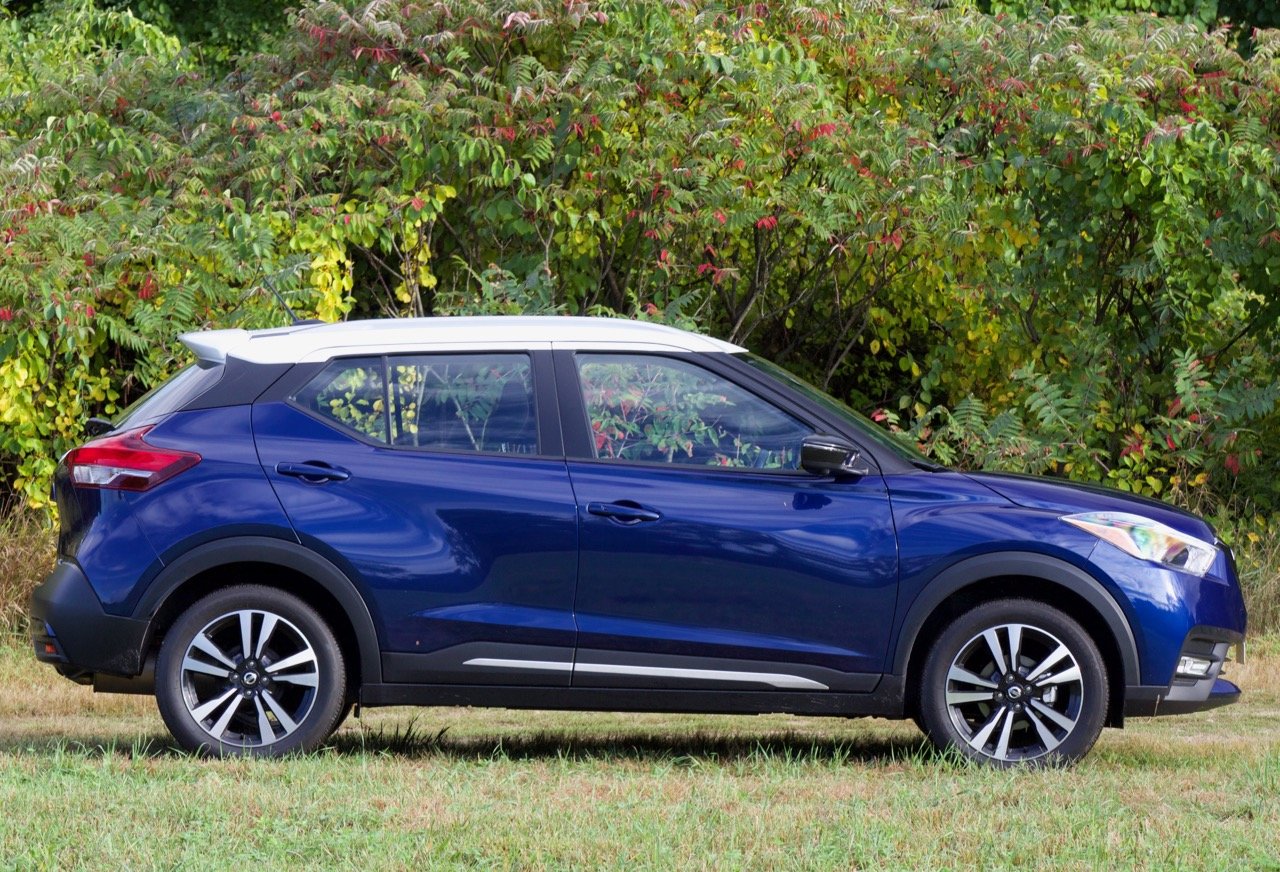 The 2018 Nissan Kicks starts at $17,990. Technically, that makes it the least expensive subcompact SUV available in the U.S. right now.

Our SR test model did not have the Premium Package, but it did have $215 floormats and the two-tone roof, which added $150 (and if you care about style, was worth it). With those options and a $975 destination charge, our SR test model came to $21,630.

Considering our test car came nearly fully loaded, that’s pretty darned affordable. Whether you need a crossover for the ‘burbs or the city, if your biggest priorities are price and functionality, the Kicks is a solid option. Driving dynamics are not that great, and the lack of AWD will limit its deep winter capabilities. But this is a crossover that knows what it is… and what it isn’t. For daily commuting on the cheap with a bit of extra space, the Kicks delivers.

Dean Looks interesting.. BUt I have a 2011 Nissan Cube and still cannot find a car with the room, hauling and headroom it offers along with 30MPG.. Wish Nissan had put the Juke drivetrain in the Cube... Would have been a great combo!!

GuruXBD45 Had they kept this car on par with the Juke I'd own one, instead a just ended up buying a newer Juke before they were discontinued. Shame really...I hope they either give this thing some balls or bring the Juke back before it's time for me to replace my car again.

Albert For improved safety, Nissan should have provided all 4 wheels with ABS disc breaks and not 2 drum and 2 disc brakes. I’m sure that helped to keep costs down. As far looks in and out hard to beat the Kicks. For practicality and more safety look elsewhere.

Guru2NQRR feels like driving a larger luxury vehicle with all the small features (gas mileage !!). great back hauling room, and even better leg room for my 6 ft husband.

Have you driven a 2018 Nissan Kicks?
Rank This Car