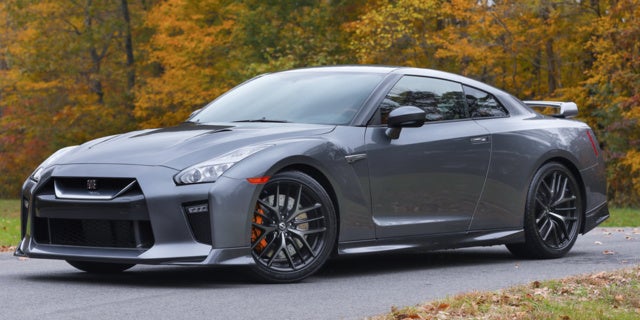 The Nissan GT-R has always offered maximum performance per dollar. The big change for 2018 is the new “Pure” model that does away with a handful of features to push the base price under the $100,000 mark. Otherwise, there are Premium, Track, and NISMO GT-Rs to choose from, the latter of which costs over $175,000 but is still a serious performance bargain given its capabilities. Other small changes for 2018 include standard Apple CarPlay and a new black interior trim package.

At the heart of the GT-R is its monster of an engine that maintains the car’s nickname of “Godzilla.” The hand-built 3.8-liter twin-turbo V-6 makes 565 horsepower and 467 pound-feet of torque in its base trim and up to 600hp in NISMO-specs. The highly advanced all-wheel-drive system and 6-speed dual-clutch semi-automatic gearbox very effectively put all that power to the pavement, and the GT-R will do 0-60 in under three seconds and go on to nearly 200 mph. The GT-R is a big, heavy car with a big, powerful engine, so it’s quite thirsty at an EPA-rated 16 mpg city, 22 highway, and 18 combined.

The GT-R is a technical tour de force - not just because of its incredible straight-line performance but also because of how it goes around corners. The all-wheel-drive system can vary the torque input greatly depending on the situation with up to 100 percent of it going to the rear or even a 50/50 split. The transmission timing, suspension, and stability control settings are all adjustable. Enthusiasts can drive a GT-R quickly without losing control and they will look good doing it. That said, the GT-R has also been criticized for feeling a bit detached when it comes to driving. Time behind the wheel of a GT-R has frequently been compared to playing a video game.

Last year, Nissan gave the GT-R a new dashboard with a larger display screen and fewer buttons, as well as new seats and new leather on the instrument panel. The Premium model comes with a Bose stereo, active noise cancellation, and titanium exhaust. These used to be standard features, but the new Pure model does without them in order for Nissan to be able to offer a sub-six-figure GT-R. The Pure model still has heated leather front seats, navigation, and Bluetooth capability. Track and NISMO GT-Rs add carbon fiber trim to the interior as well as sportier Recaro seats. The NISMO deletes the rear seats in the interest of weight savings.

Cars at this price point don’t get crash tested, but the GT-R comes standard with a reversing camera and drivers can take solace in the fact that it has all-wheel-drive, sticky tires and stability control system. The most exciting news from the GT-R lately is the Pure model. The GT-R is a car that has always offered heaps of performance for the money, and this new model essentially offers all the performance but for a few grand less.