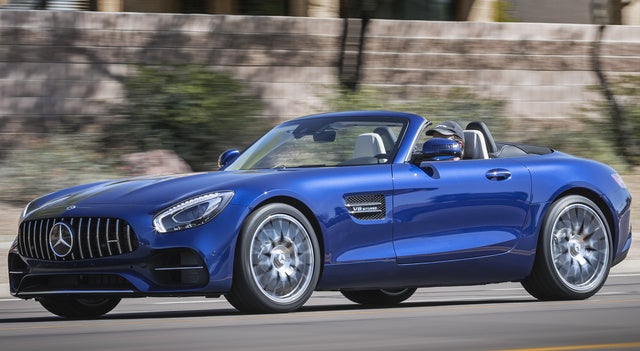 Average user score
5 ⁄ 5 stars
Based on 2 reviews
Review by Roberto — The owner is super friendly, helpful and the store have a nice inventory Read more
Review by Guru59932 — no comment is the best exotic car i love it Read more

Within the ranks of Mercedes-Benz sedans, coupes, convertibles, and crossovers, a select few wear the letters “AMG.” As Mercedes-Benz’s in-house performance division, AMG is the height of driving purism for the automaker, and the AMG GT sports car is its centerpiece. Introduced for the 2015 model year, the AMG GT followed up the SLS-AMG supercar sold from 2010 to 2015, with styling derived from the SLS and the SL-Class convertible. For 2018, the AMG GT gets an all-new look to celebrate AMG’s 50-year anniversary.

The AMG GT’s exterior is simple and elegant—its long hood gives way to a curving cockpit area and a sloping fastback that finishes clean. For 2018, the most notable design update is a new Panamericana grille borrowed from the AMG GT3 racecar, which was in turn inspired by the original 300SL that raced in the Carrera Panamericana. The new grille displays 15 large silver slats and a massive Mercedes-Benz emblem.

The AMG GT would be an impressive supercar alone, but its multiple available trim levels and body styles make it even more appealing. Although initially only available in coupe form, 2018 sees the introduction of a convertible AMG GT, with a top that can open and close in just 11 seconds at speeds up to 31 mph. The coupe variant comes in base GT coupe, GT S, GT C, and GT R trims, and the new convertible comes in GT Roadster and GT C Roadster trims. Each trim is paired with a different modified version of the twin-turbocharged 4.0-liter AMG V8 engine, which features a front-mid layout and a transaxle at the rear axle (rather than a transmission at the front) for optimal weight distribution.

The AMG GT R is also new this year and is the most hardcore of the bunch, its turbo V8 pumping out an impressive 577 hp and 516 lb-ft. Unsurprisingly, it’s also the quickest of the bunch, hitting 60 mph from a standstill in just 3.5 seconds on its way to a top speed of 198 mph.

A near-200 mph sports car requires composed handling and braking to live up to its reputation, and the AMG GT delivers on that promise with a double-wishbone AMG sports suspension at all 4 corners. The GT S, GT C, GT C Roadster, and GT R trims all feature Mercedes’ AMG Ride Control suspension with adaptive adjustable damping, which responds to road conditions and adjusts in real-time.

The AMG GT features a limited-slip rear differential for maximum traction and performance. In the base GT coupe and Roadster, the differential is mechanical, while the GT S, GT C, GT C Roadster, and GT R all receive an electronically controlled system. The AMG GT comes with a 3-stage stability program with ESP On (full function), Sport Handling (limited intervention), and ESP Off (fully off) settings. You can also customize your ride with AMG Dynamic Select, which offers Comfort, Sport, Sport+, and Individual drive modes. Operated via a small dial in the center console, each mode features unique tuning for the throttle and shift mapping, suspension feel, and steering response.

Some sports cars prioritize form over function in the cockpit but the AMG GT celebrates both, with a driver-focused layout that is as visually stunning as it is ergonomic. Key driver controls line the center console, while the small tray at the bottom of the center stack will hold your wallet and keys while you focus on the road. The center console comes with Mercedes-Benz’ Comand infotainment system and touch-sensitive controller, a touch pad that allows you to “draw” letters to enter a contact for the phone or address for the navigation system. Sophisticated and technologically advanced, the AMG GT’s cockpit is a perfect complement to its finely tuned and potent engine lineup.

What's your take on the 2018 Mercedes-Benz AMG GT?

Have you driven a 2018 Mercedes-Benz AMG GT?
Rank This Car

I Have A Car I Am Interesting In. How Can I Negotiate The Price?

Hello, Friends! My name is Ilya Starr. I have a car I am interesting in. How can I negotiate the price on cargurus if seller is not responding to my messages? You can email me at ilyastarr@gmail.com ...

106 views with 3 answers (last answer about a year ago)