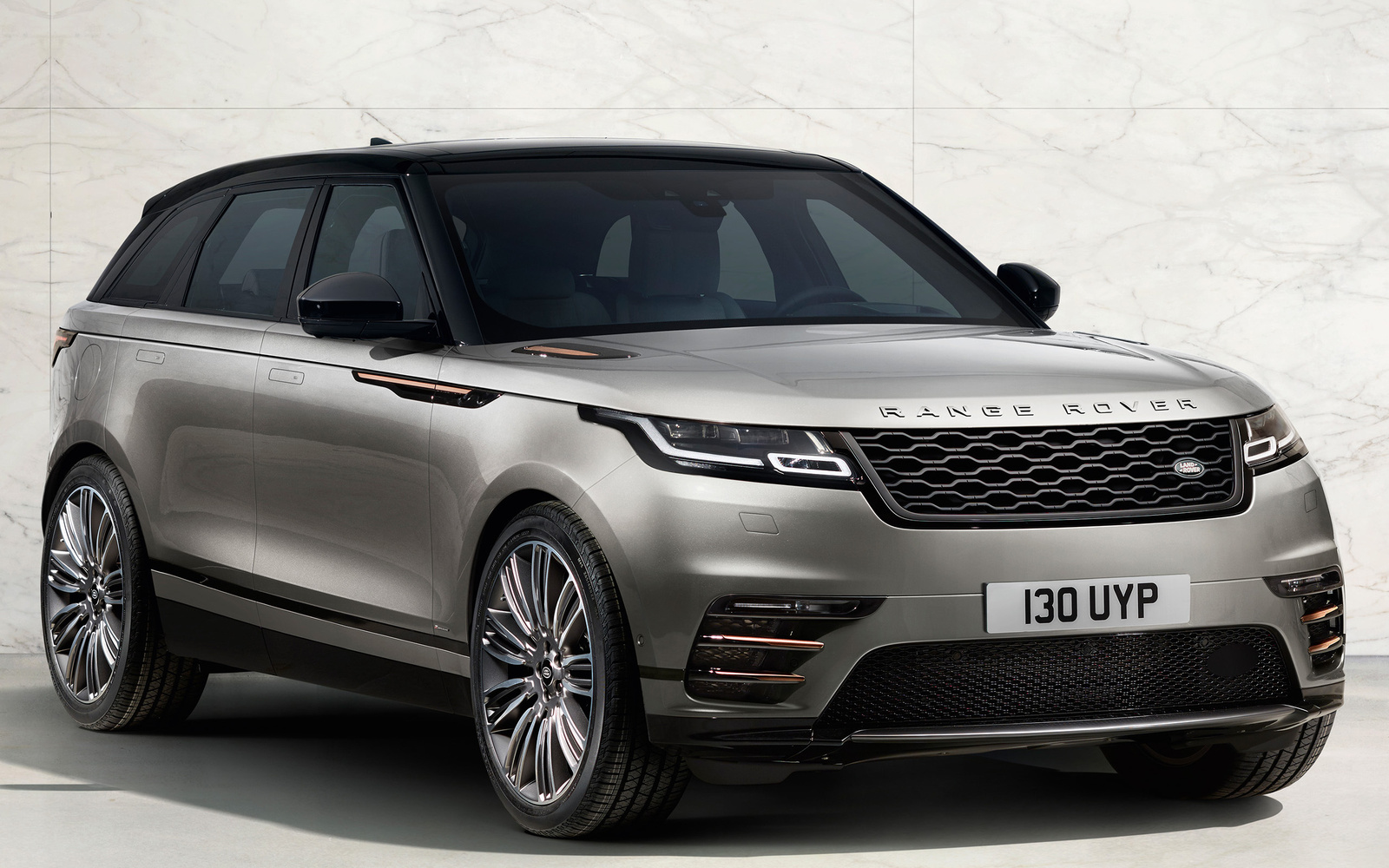 Most Land Rover owners have enough income and free time to spend a week and $10,000 off-roading in Colorado. That isn’t sarcasm—it’s a pleasant reality for this luxury SUV brand. Cash-rich buyers will enjoy the new Velar, the fourth and certainly not the last new model in the growing Range Rover family. Why buy one of these over a larger Sport or the smaller Evoque? That's the burning, leather seat-massaging question we’re here to answer. 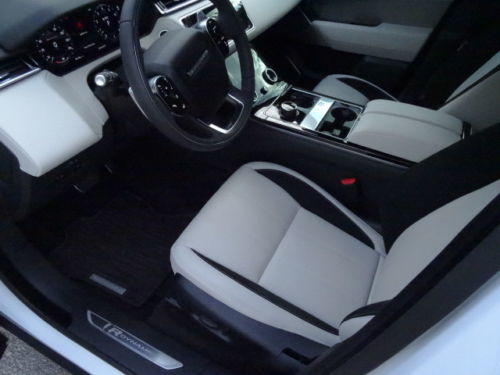 The Velar is a Range Rover that sits lower to the ground. Walk up to it, and an average-height man will stare directly at the roof. In the larger Rovers, the driver’s seat towers over the steering wheel like that of a city bus. The Velar trades that all-commanding perch for a garden-level apartment view. It’s more like a tall sedan than a large truck, and that makes entering and exiting the Velar much easier. But it’s not a little trucklet like the Evoque. Like the Jaguar F-Pace upon which it’s based, the Velar straddles the compact and midsize crossover segments. It’s larger than a Porsche Macan, yet tighter than a BMW X5. But no one will mistake the Velar--with its boxy yet sweptback profile--as anything but a Range Rover.

The car’s designers had fun with the Velar’s power-retracting door handles. They keep flush with the body when the car is locked and deploy a couple inches after unlocking. Unlike the pivoting deployable door handles in a Jaguar F-Type, Land Rover claims that if frozen, its handles can punch through a sheet of ice. Mirrors inside the wide LED taillights create a 3D effect. Our Velar added polished black trim that contrasted with grayish Byron Blue paint and a white-and-black leather interior. The sloping, glossy center stack is blacked-out with the instrument panel until the driver pushes the Start button, and then everything illuminates with bright, high-resolution graphics. There are details everywhere, from the pillow-top headrests to the Velar’s profile sketched and stamped on the B-pillars and projected by the puddle lamps underneath the mirrors. Although base versions aren’t as well-appointed as our fully loaded example, the quality is high. Every surface is soft, stitched, and unique. Consider the Velar a boutique luxury hotel as opposed to an upgraded suite at the Sheraton. 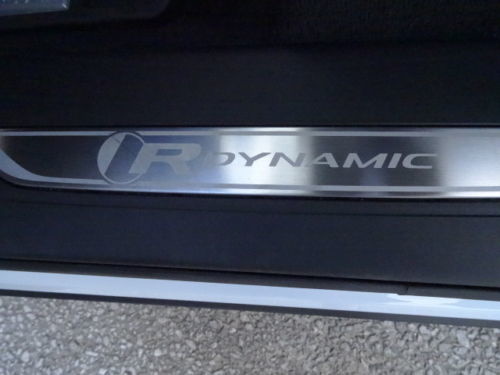 With a steel spring suspension and without a low-range transfer case, most Velars won’t be any better equipped on hardcore trails than a Subaru Forester. Like the Evoque, the Velar deletes heavy-grade off-road hardware for a street-tuned composure that doesn’t lean and dive like the larger Rovers. Opt for the air suspension, and you’re afforded nearly 10 inches of ground clearance that lets the Velar cross a moving stream more than two feet deep. A torque-vectoring rear axle that brakes the inside rear wheel around turns, a simplified version of the Terrain Response 4x4 system, and hill descent control come standard. That’s more than enough for most drivers who’ll never hop a curb. Loaded trims like our P380 HSE R-Dynamic have an active locking rear differential that varies the distribution of torque between the left and right wheels, along with Terrain Response 2, which can automatically select driving modes and stiffen the suspension and steering effort. Our Velar took curved highway on-ramps at surprisingly high speeds without the tires protesting or the stability control intervening. You couldn’t do that with a traditional Range Rover unless you like looking upside down. The ride never becomes harsh or brittle, and the brakes have a Jaguar-like feel in that they bite hard without a significant dead zone in the pedal. Don’t get the wrong impression here: The Velar is still very much a traditional, laid-back Land Rover, but it’s far more agile than it appears.

We’ll save you the trouble of picking out engines. Get the gasoline V6 on the P380 version. It’s a supercharged 3.0-liter engine with 380 horsepower and 332 pound-feet of torque that delivers muscle and pleasing intake sounds. The P250 models have a 2.0-liter turbocharged inline 4-cylinder with 247 hp and 269 lb-ft of torque. But if you’re demoting to four cylinders, we’d recommend the P180’s turbodiesel engine and its 317 lb-ft of torque that's strong and arrives right off idle. Its meager 180 hp won’t win a top-speed contest, but in midrange acceleration and around town, this engine is plenty strong and smooth. Fuel efficiency climbs to an EPA-estimated 26 mpg city, 30 highway, whereas our V6 trim musters only 18 city and 24 highway. The gasoline four slots at 21 city, 27 highway. We averaged a rather disappointing 19 mpg over mixed driving with the V6. All engines mount to an 8-speed automatic and 4-wheel drive, although the base Velar trim is available only with the gasoline four. 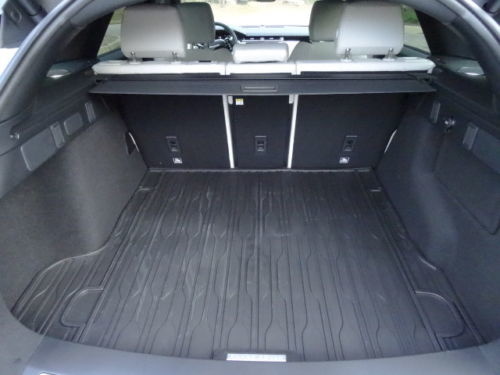 Four adults sit comfortably in the Velar, despite an angled roofline that cuts rear headroom ever so slightly. There’s no question the Velar is a beautiful piece, prettier still than the new quarter-million-dollar Bentley SUV, and appointed like one of Her Majesty’s many powder rooms. The angled, rectilinear dashboard is classic Rover, but not the new double touchscreens. For the first time, there are no physical switches anywhere on the center stack. The bottom screen handles important secondary functions--the seat temperature and massage, climate, and driving modes--separately from the top, which shows navigation and allows the driver to fine-tune settings for the stereo, phone, and more. A small motor pivots the top screen up or down to reduce glare. More touch-sensitive buttons sit on the black panel beneath the bottom screen. Most everything is quick, high-resolution, and easy to use.

But some features, like adjusting the fan speed, are not simple. They’re also distracting at times. If you wish to activate the seat heater and you’re looking at the driving mode screen, you’ll need to swipe, tap, and twist. There is no physical feedback beyond the two rotary dials, which change function depending on the selected menu. Cool and slick when parked? Sure, but this system isn’t as intuitive on the move. The digital instrument panel is a work of art. You can choose well over a dozen layouts, including a screen that overlays an image of an empty road for monitoring the lane-departure warnings and cruise control. But the menus are complex and not as organized as in Audi models. Complexity seems to be the taste du jour among all automakers, and while the Velar is covered in fancy screens, it’s no worse than competitors. 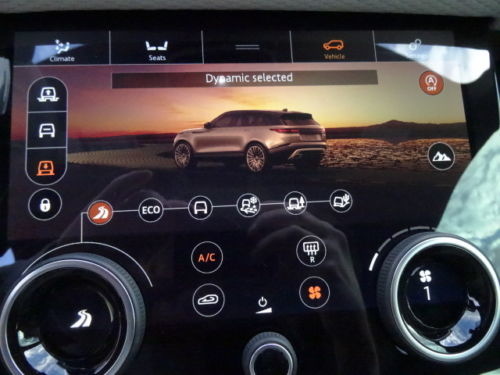 But the Velar sometimes trips over its own software. Constant bugs and frustrating errors have plagued every single Jaguar Land Rover vehicle I’ve driven with the company’s latest InControl Touch Pro system. At first it was operating perfectly, then days later, the backup camera would freeze its image on the main display. When I was parked, I was wondering how on earth I could be in front of a house that wasn’t actually in my mirrors. On another occasion, the main screen froze entirely and required a complete restart--engine off, open door, lock, unlock, start--to function properly. On another occasion the seat massage failed to activate in the secondary bottom screen. Thankfully the instrument panel didn’t go dark. This is unacceptable in any car, let alone a vehicle costing upward of $90,000.

Unfortunately, those snags cost the Velar an otherwise stellar review of its technology. Onboard Wi-Fi, live weather, news, sports scores, traffic--it’s all easy to connect, read, and browse information in this system. If everything worked all the time, the slight loss of those physical dials and switches could be forgiven.

But there are other features that deserve honorable mentions, like the rear seats that can be remotely folded from a smartphone app. When loading items into the cargo area or attaching a trailer, two buttons can raise or lower the air suspension even if the car is shut off. An automatic guidance system can steer the Velar all by itself to perfectly park a trailer in a desired spot. Land Rover has some fantastic technology wrapped in gorgeous surroundings. The problem is, it just isn’t executed well enough to score higher in this category. 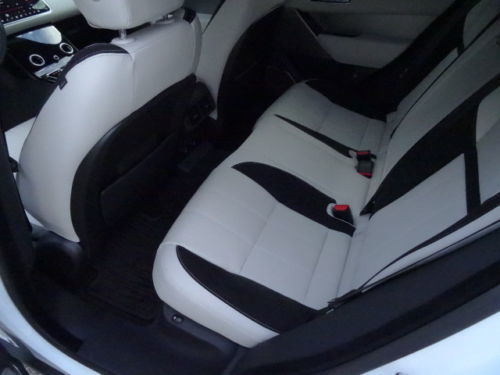 The Velar has not been rated by the National Highway Traffic Safety Administration (NHTSA) or the Insurance Institute for Highway Safety (IIHS). That said, its rigid aluminum-intensive structure should perform exceptionally well in a crash. The overall feeling when you get inside a Velar is one of utter solidity. A standard Low Traction Launch system can help the Velar unearth itself from wet grass and snow. Also standard are auto braking with pedestrian detection, forward-collision alert, and lane-departure warning. Land Rover has not introduced semi-autonomous capability, and the lane-keep assist does not actively steer the vehicle. However, the vehicle’s blind-spot monitoring will display alerts on the instrument panel and flash if another vehicle is overtaking at high speed. 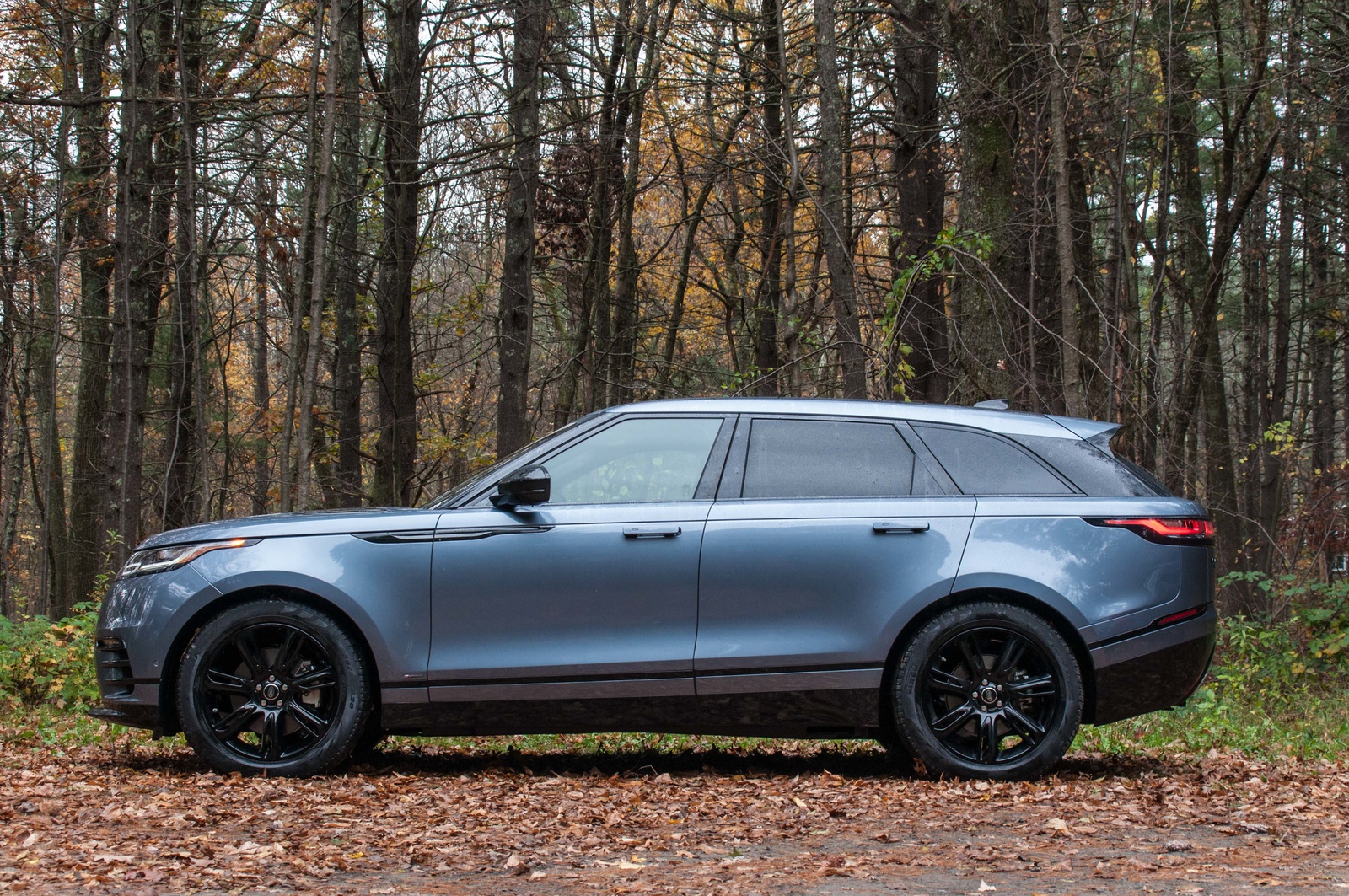 The Velar starts at just under $50,000 for the base P250 and surpasses what a well-equipped Range Rover Sport might cost when equipped like our $90,170 P380. Porsche, BMW, and Mercedes-Benz have no shame in asking similar sums. At this level, you’re committed to buying an expensive, lavish SUV that pulls no punches on style, dynamics, and technology. Not everything is perfect, but the Velar is one of the hottest SUVs on sale, if not the hottest Range Rover in the Land Rover lineup.

What's your take on the 2018 Land Rover Range Rover Velar?

GuruZ2NH2 I am buying one real soon. Land Rover is Sharp nice looking to Drive.But is it go on (GAS) ?

Have you driven a 2018 Land Rover Range Rover Velar?
Rank This Car

Can I Sell A Leased Vehicle Through Your Service?

My vehicle is a lease, can I sell it through you? What steps do I need to take?

34 views with 3 answers (last answer about a year ago)

I Have Made An Offer And It Has Been Accepted.Price Negotiation You Have A...

I have made an offer on a vehicle and it was accepted. You have accepted this offer! $59,500 The owner has NOT contacted me or emailed me with a response. What do I do from here?

My Velar comes with air suspension but the car is missing the rear height adjust buttons in the trunk. Talked to the dealer, he claimed that this feature is not available in western Canada even if I...