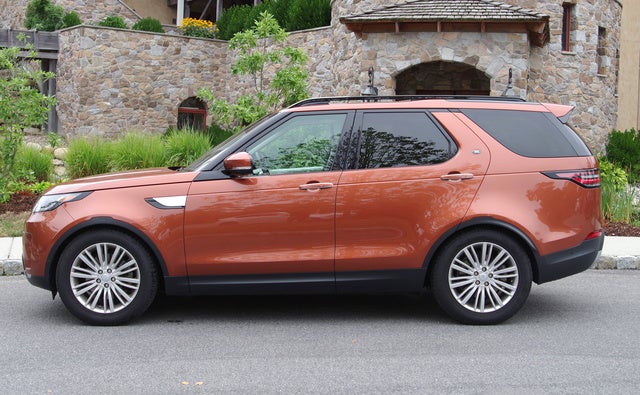 The Land Rover Discovery, affectionately known as the “Disco”, has been around for nearly 30 years and is now in its fifth generation, introduced last year. The latest Discovery is based around an aluminum chassis and offers better fuel economy than its predecessor without losing any of its rugged capability. Because the fifth generation-updated design is still fresh, the midsize SUV carries over into 2018 largely unchanged. It is available with one of two engines and in either SE or HSE trim. Any Land Rover is a status symbol, and the Discovery is no exception. A base SE model runs over $50,000, and fully optioned models can push past $70,000.

Behind the Discovery’s unmistakable grille is a turbocharged 3.0-liter V-6 that makes 340 horsepower and 332 pound-feet of torque driving all four wheels through an 8-speed automatic transmission. Despite weighing nearly 5,000 pounds, the Discovery’s 6-cylinder is still enough to push it to 60 miles per hour in under seven seconds. An optional turbodiesel 6-cylinder offers increased low-end torque—443 lb-ft in this case. It also offers slightly better fuel economy, with 21 mpg city, 26 highway, and 23 combined compared to the gas engine’s 16, 21, and 18. The diesel is only available in the top two HSE and HSE Luxury trims.

Although typically spied in the suburbs, the Discovery is a capable off-roader. It’s available with either traditional coil spring suspension or optional air suspension, the latter adding to ground clearance for 11 inches total. Also available is Land Rover’s Terrain Response 2 package that includes an active locking rear differential and different driving modes for sand, snow, or rocks. The HSE Luxury model adds a low-range transfer case.

Inside, the new Discovery features wood accents, leather, dual-pane sunroof, dual-zone automatic climate control, and an 8.0-inch infotainment screen. Three-row seating is optional, but it cuts rear cargo area down to just 9.1 cubic feet. Without the third row, however, the Discovery has 42 cubic feet of space or a cavernous 77 cubic feet with the second row seats folded. There are numerous storage cubbies throughout.

What's your take on the 2018 Land Rover Discovery?

Have you driven a 2018 Land Rover Discovery?
Rank This Car

Where Can I Find Reliable Land Rover Mechanics In VA Other Than The Dealers...

I am looking for a reliable mechanic for my LR in around Fairfax VA area,