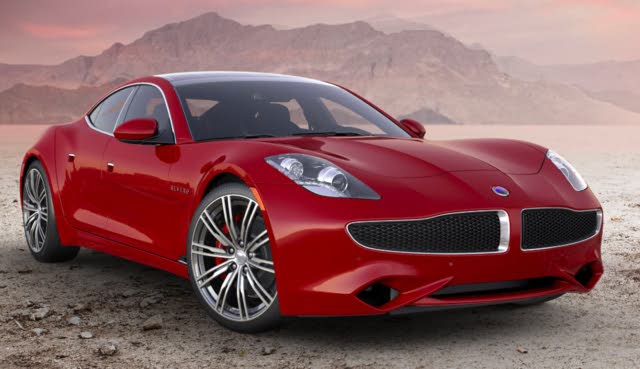 If the 2018 Karma Revero looks familiar to you, that’s because it’s a second act. In 2012, a car called the Fisker Karma debuted, fresh off the heels of an energy crisis. It promised a luxurious experience inside of a sporty, electrically-powered package, with an on-board gasoline generator and plug-in capabilities. The Fisker Karma was only produced in 2012 and shortly after, the company went bankrupt. For 2018, the Fisker Karma returns for its hiatus, this time as the Karma Revero.

The Revero’s design is mostly identical to that of its forebearer, with the same long, low, and wide profile, the split-wing grille, the flush door handles, and the exaggerated rear haunches. The interior looks about the same, too; even six years later, it still looks fresh and modern. With the Revero, Karma put a renewed focus on craftsmanship. Take, for instance, the car’s badges: each one is painstakingly painted by hand. Even the standard solar roof looks great, with white strakes painted between the individual panels for a windswept look. Everything else adds up to a product that’s as much a work of art as it is a vehicle.

The Revero uses both gasoline and electric power, making it a hybrid. The car can be plugged in, taking 24 minutes to bring it to an 80% charge on a 40 kW connection, and the solar roof provides up to 200 W of power. Total horsepower hits 403 and torque reaches 981 pound-feet. Karma provides the Revero with three modes: Stealth, Sustain, and Sport mode. Stealth mode is a pure electric mode, while Sustain relies on the generator to maintain the battery’s charge state and Sport utilizes both the electric motors and gasoline engines to provide the best performance. There’s up to 50 miles of all electric range, and up to 300 miles of total range once the generator kicks in. The Revero is rated for 60 miles-per-gallon equivalent (MPGe) combined in electric-only mode, but only 20 miles per gallon (MPG) on premium gasoline.

There are six handsome finishes available for the Revero’s interior, each with its own unique use of leather, suede and reclaimed wood or carbon fiber. But commonalities include a dual-layer dashboard with color-contrasting sections, a tall, wide middle console that stretches all the way to the rear (making the Revero a four-seater), and digital interfaces that look like they belong in a spaceship. Of note are the 12.3-inch instrument cluster interface and 10.2-inch touchscreen infotainment system. They’re both completely different from the systems in the old Fisker Karma. Other features include keyless access and start, USB connectivity, Bluetooth, navigation, automatic dual-zone climate control, a 7-speaker audio system, and over-the-air update capabilities via a built-in 4G LTE connection. Despite the car’s size, don’t look for limousine-like space for any of its four occupants. It’s cramped enough to be considered subcompact by the Environmental Protection Agency (EPA).

Karma has made sure the Revero meets all structural and protective regulations. Safety features are limited to eight airbags, a reversing camera, front and rear parking sensors, and lane-departure warning. Since it’s such a niche vehicle, the Insurance Institute for Highway Safety (IIHS) hasn’t yet tested the Revero.

The Karma Revero’s reincarnation is mostly the result of a buyout and a name change. While improvements were made in key areas, targets and consumer expectations of both electric and luxury vehicles have changed, and the Revero finds itself amid a sea of competitors that outperform it in nearly every metric. Still, on a design and novelty basis, there’s nothing like it.

Have you driven a 2018 Karma Revero?
Rank This Car

Where Can I Get Basic Service