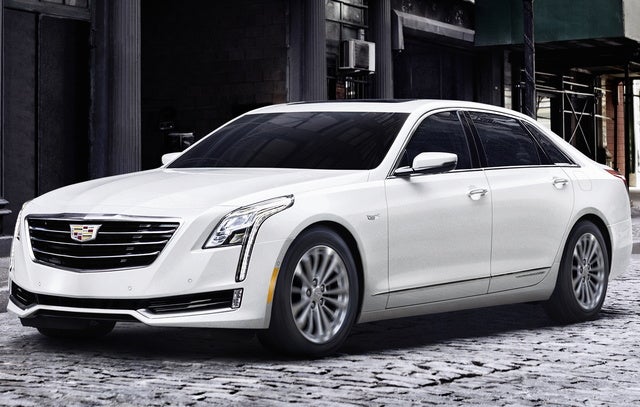 For 2017, Cadillac expanded its CT6 lineup to include a plug-in hybrid version. The standard CT6 was only introduced for 2016, so its overall design is still fairly fresh, and the CT6 Plug-In in particular is a step towards further breaking into the Chinese market. The CT6 Plug-In is even assembled in China, but it does hold an appeal for drivers in the United States, especially in areas like Southern California. Not much changes for the 2018 model, although a newly available SuperCruise adaptive cruise control will allow for hands-off driving, and the optional Park Assist feature now includes gas- and brake-pedal operation. There's also a new exterior paint color, Cocoa Bronze Metallic.

Visually, the CT6 Plug-In is nearly identical to the standard CT6 sedan, apart from a 2.0E badge on the trunk and an extra filler cap for the electric plug. The CT6 Plug-In also comes standard with many of the features that are optional on more conventional models.

The CT6 Plug-In pairs 2 electric motors with a revised version of the turbocharged 2.0-liter 4-cylinder engine from the base CT6 to form a 2-mode hybrid system with an output of 335 hp and 432 lb-ft of torque. The 2 electric motors are backed by a 17.6kWh battery pack and work together through a planetary gear set, putting power to the road via a 4-speed automatic transmission. The 2.0-liter gas engine also has a higher idle than normal, in order to generate electricity while the car is stationary. The CT6 Plug-In is rated at 62 MPGe combined with an all-electric range of 31 miles, and charging the batteries via a 240-volt outlet should take about 4.5 hours.

The CT6 Plug-In platform is impressively light for a car of its size, in large part thanks to the high-strength steel and aluminum used throughout. Cadillac claims this results in a lighter overall weight than if the car was made entirely of aluminum, since steel is more sound-absorbent, which eliminates the need for extra sound-deadening material. Steering is by electric power assist and is reportedly well weighted, and the CT6 Plug-In model offers several driving modes to switch between gas and electric-only power. The regenerative braking force can be adjusted using a paddle to the left of the steering wheel.

The one significant drawback of the CT6 Plug-In is one that’s common to most vehicles in the plug-in hybrid category—its trunk space. While the regular CT6 comes with an unexceptional but decent 15.3 cubic feet of cargo space, the CT6 Plug-In offers just 10.6 cubic feet due to the location of the battery pack. Otherwise, the Plug-In features the same impressive amount of interior room—especially for the rear passengers—as the rest of the CT6 range.

The CT6 Plug-In gets Cadillac’s CUE infotainment system centered on a 10.2-inch touchscreen with a touchpad that features handwriting recognition. The spacious rear seats offer 2 USB ports, a 12-volt socket, and a 120-volt outlet, and wireless device charging is also included. The Plug-In comes standard with the Rear Seat Infotainment package, in part because back-seat comfort and convenience are highly important in the Chinese market. Up front are heated and ventilated seats, dual-zone climate control, a power-adjustable steering wheel, a panoramic sunroof, and a Wi-Fi hotspot.

Users ranked 2018 Cadillac CT6 Hybrid Plug-In against other cars which they drove/owned. Each ranking was based on 9 categories. Here is the summary of top rankings.

Have you driven a 2018 Cadillac CT6 Hybrid Plug-In ?
Rank This Car

Do Have A Ph Number We We You Ca Be Contacted