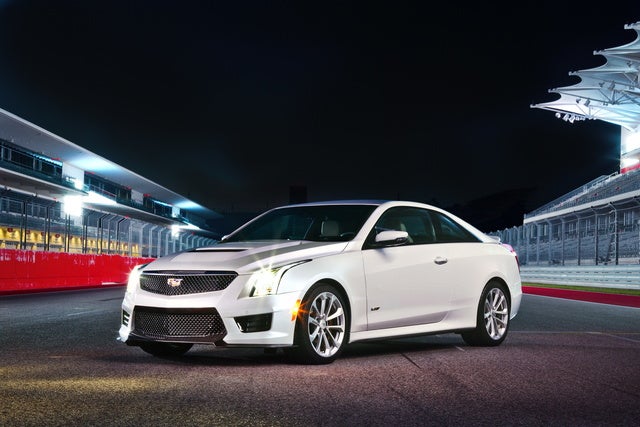 German automakers have ruled the roost when it comes to compact sport sedans, especially in the high-performance area. But Cadillac has been giving them a run for their money with the first generation CTS-V and the current ATS-V. Offered in both a sedan and coupe, the V builds upon the excellent bones of the standard ATS with tweaks to the suspension, upgraded engine, and design that make it stand out in a crowded parking lot.

A new front fascia comes with a narrow mesh grille, larger air ducts, and a domed hood. The side profile shows a set of low-profile tires with a set of 18-inch wheels. Around back is a small lip spoiler and twin exhaust tips. A carbon fiber package brings forth a more aggressive front splitter, rear diffuser, rocker extension panels, and a larger rear spoiler. 2018 sees Satin Steel Metallic added to the color palate.

Inside, the ATS-V offers some clever touches, such as carbon-fiber accents and a set of optional Recaro sport seats that hold you in during enthusiastic driving. This year will see the ATS-V getting the all-new Cadillac user experience (CUE) infotainment system. The new system hopes to fix many of the issues that plagued the previous CUE system. It begins with an all-new interface that has taken some idea from smartphones with large touch buttons and shortcut buttons to common functions. Cadillac has also worked on cutting down the number of steps to complete simple tasks, such as adjusting the fan speed. The new system also comes with the ability for various drivers to set up their own profile of the system. This profile will transfer to other Cadillac models via a cloud computing system.

Under the carbon fiber hood is a twin-turbo 3.6-liter V6 packing 464 horsepower and 445 pound-feet of torque. Power goes to the rear wheels via a 6-speed manual or 8-speed automatic. Activate launch control and drivers can hit 60 mph in just a hair over 4 seconds with either transmission. While the turbo-6 engine lacks the rousing sounds expected in a high-performance model, it doesn’t lack thrust. The 6-speed manual delivers crisp shifts and features an automatic rev-matching system when downshifting. If it's quickness you want, then the 8-speed automatic is the way to go. EPA fuel economy figures for the ATS-V stand at 16 city, 23 highway, 19 combined for the manual and 17, 25, and 20 for the automatic.

Many consider the standard ATS to be one of the best handling models in the class thanks to the finely-tuned chassis that was tested extensively at the Nurburgring in Germany. The ATS-V builds upon this with the optional Magnetic Ride Control (MRC) system. The MRC system uses special shocks filled with magnetic fluid that automatically adjust the firmness within milliseconds. This allows the ATS-V to show off its sharp reflexes when cornering. You can adjust the firmness of the shocks to provide a track-ready ride to something a bit comfortable for the daily drive. A set of Brembo brakes bring the ATS-V to a quick stop.

Cadillac will also offer the Performance Data Recorder for the ATS-V. Carried over from the Chevrolet Corvette, this system uses various sensors around the vehicle and a camera in the rearview mirror to capture video of a track day. Various bits of data such as speed, a map of the track, and g-forces can be overlaid onto the video.

Standard safety equipment for the ATS-V includes a full set of airbags, traction control, stability control, reversing camera, OnStar, and the Teen Driver system that allows a parent to create a key with limits on speed and audio volume. An optional Safety and Security Package brings automatic high beams, automatic wipers, heads-up display, lane-departure warning and intervention, forward-collision alert, and blind-spot monitoring with rear-cross traffic alert. The National Highway Traffic Safety Administration is the only group to the crash test the ATS-V where it earned a 5-Star overall rating.

All ATS-Vs come with complimentary 2-day course at V-Performance Academy in Nevada. This course will teach you high-performance driving techniques that will let you extract the most from your ATS-V along with making you a safer driver. The academy includes two nights of lodging, a Cadillac courtesy vehicle, transportation to and from the airport, and breakfast and lunch. The only thing you need to provide is a flight to get there and back.

Have you driven a 2018 Cadillac ATS-V?
Rank This Car