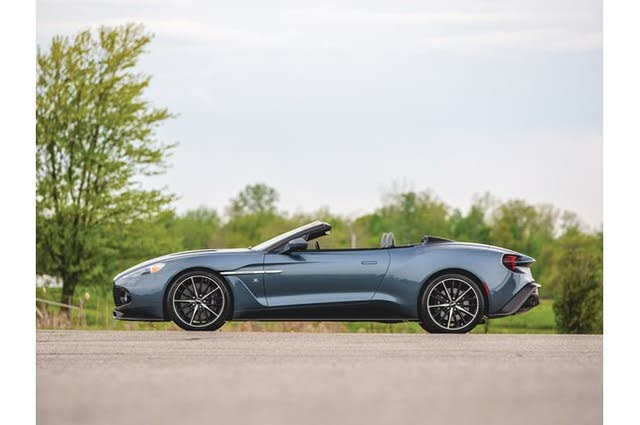 The current Aston Martin Vanquish is in its last year of production, and it’s not going away quietly. The first Vanquish dates back to 2001 as a replacement for the old Virage, and a new version came out in 2012. However, while some might see the Vanquish as a hangover from the dark years when Aston Martin was owned by Ford, the brand thoroughly reworked the car for 2017 with an updated Vanquish S model with more power and new aero bits. The standard Vanquish S coupe starts at $295,000, and the convertible “Volante” version starts at $312,950. For 2018, Aston Martin offers a special send-off model called the Vanquish S Ultimate.

Under the hood of the Ultimate is the same 5.9-liter naturally aspirated V-12 engine, which is a bit old-fashioned in the time of smaller turbocharged engines - but in a good way. Aston Martin re-tuned the V-12 last year to give 580 horsepower with torque remaining at 465 lb-ft. This engine is still mated to a rear-mounted 8-speed paddle-shifted gearbox. Aston Martin claims a top speed of 201 mph and a 0-60 time of 3.5 seconds. Being a large V-12, the Vanquish is quite thirsty, so fuel economy falls at a dismal 13 mpg city/21 highway/16 combined.

Of the original models, the Vanquish S received stiffer suspension and revised steering without sacrificing a comfortable ride, and new aero bits reduced front-end lift at speed significantly. Most Aston Martins are fairly heavy cars, and the Vanquish continues the trend. Although it features carbon fiber body panels, the Vanquish tips the scales at over 3,800 pounds.

On the inside, the Vanquish feels like a premium car, but there are more compromises in design than the fresh new DB11 model. The instrumentation isn’t particularly easy to read, and the central display screen on the dash has pretty low resolution for an expensive car. However, the Vanquish’s fit and finish is impressive, and it offers a wide choice of interior color schemes. Buyers can personalize their car to a significant degree through the “Q by Aston Martin” program, nodding to the character who came up with all the gadgets for James Bond.

The 2018 Vanquish S doesn’t come with much in the way of safety features, but this car is on its way out. It’s undeniably sexy, it sounds great, and it’s very fast. It notably has one of the last big naturally aspirated V-12 engines, so it’s almost a shame that its successor will likely turn to turbos.

What's your take on the 2018 Aston Martin Vanquish?

GuruC8N73 I have a Vanquish ultimate in gold white with copper accents. It looks, sounds, and drives like a dream, and turns heads in a nice kind of way.

Have you driven a 2018 Aston Martin Vanquish?
Rank This Car