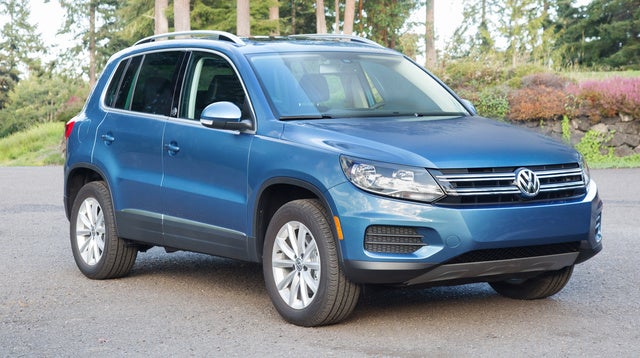 Need a compact crossover that’s long on features and performance? Check out the 5-passenger, 5-door 2017 Volkswagen Tiguan. Sure, it’s small and not particularly versatile, but it does boast sporty lines and handling, with interior appointments that are a distinct cut above those of most mini-utes in its class. Be advised, however, that even though VW touts this little crossover’s family value, the Tiguan’s base MSRP isn’t exactly budget-friendly.

For 2017, the Tiguan lineup sports a couple of changes: the lower-midlevel R-Line is replaced by the new Wolfsburg Edition, and the SE is deleted in favor of the upper-midlevel Sport trim. The 2017 stable now includes the base S, the Wolfsburg Edition, the Sport, and the flagship SEL. All trims are delivered with standard front-wheel drive (FWD), while Volkswagen’s winter-taming 4Motion permanent all-wheel-drive (AWD) system remains available. Keep in mind 4Motion-equipped trims are fine on snowy roads and mildly muddy lanes, but less so for more rugged off-road adventures.

Further upgrades for the 2017 Tiguan lineup include a number of newly standard features on the S trim, including VW’s Bluetooth-integrated Composition Media system with a 6.3-inch touchscreen, Car-Net mobile apps, HD Radio, and satellite radio. There had been some hints that the Tiguan would be a bit larger this upcoming year, but there’s no indication from VW that such is the case, so look for the Tiguan’s current measurements to carry over: a 102.5-inch wheelbase and 174.5 inches of overall length.

The Tiguan’s peppy 2.0-liter turbocharged inline 4-cylinder powerplant returns for 2017 boasting 200 hp and 207 lb-ft of torque. That grunt is managed by a 6-speed shiftable automatic transmission to the tune of 21 mpg city/26 highway/23 combined in FWD versions and 20/26/23 in AWD trims, using the recommended premium gasoline. One track test had the current Tiguan scooting from 0-60 mph in an impressive 7.5 seconds.

As for returning options, all trims are eligible for a trailer hitch and wiring, with higher trims offering a Helix subwoofer with a dedicated 5-channel amp. An additional option to be introduced for the 2017 Tiguan Sport is a Leather package that includes Vienna leather upholstery, power-adjustable front seats, memory for driver settings, and power-folding outside mirrors.

The National Highway Traffic Safety Administration (NHTSA) gives the Current Tiguan 4 out of 5 stars for overall crashworthiness, with 3 stars awarded in frontal impact tests and 5 stars in side-impact testing. The Insurance Institute for Highway Safety (IIHS) gives the 2016 Tiguan lineup its best score of Good in side-impact, moderate-overlap frontal-offset, and roof-strength testing. In the small-overlap frontal-offset portion, however, the current Tiguan received a second-worst score of Marginal.

Introduced for the 2009 model year and garnering only modest sales since, the Tiguan will try to make a bigger market splash in 2017 against such traditional competitors as the Ford Escape, Hyundai Tucson, and Mazda CX-5.

What's your take on the 2017 Volkswagen Tiguan?

Users ranked 2017 Volkswagen Tiguan against other cars which they drove/owned. Each ranking was based on 9 categories. Here is the summary of top rankings.

Have you driven a 2017 Volkswagen Tiguan?
Rank This Car

My daughter owns a 2017 VW Tiguan. She purchased it in Quebec. She is now living in Saskatchewan and needs to “plug it in”. It’s -30 something with the windchill. And we can’t find a block heater...

How Does The Back Window On A 2017 Vw Tiguan Open?

Why Is A Car Offered For Sale, If It Is Not Available?

I have asked several times to test drive a 2017 Tiguan at a specific commercial outfit. Every time, I hear that the car is about to be returned to the lot, being at the dealer. Southern Auto Imports...

My touchscreen will not respond. I did the reboot several times and no response. Is there anything else I can try?