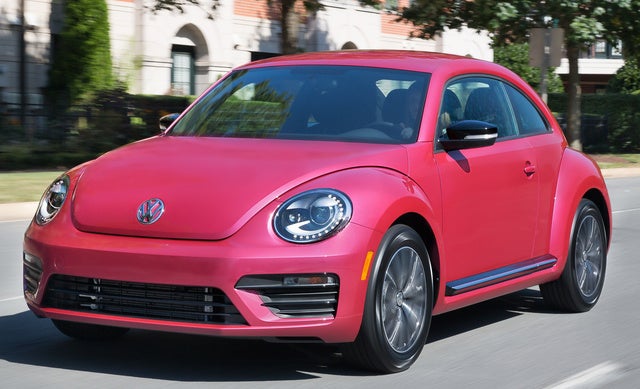 The Volkswagen Beetle is arguably one of the most iconic vehicles ever produced. Many see it as a symbol of the peace-and-love movement of the ‘60s, but the Beetle was an engineering marvel of its time as well. Here was a small car that could carry 4 people comfortably with excellent fuel economy. The current Beetle follows in those footsteps, but with a more distinctive look.

Volkswagen hasn’t made many changes to the Beetle since the present model was introduced back in 2011. Unlike its predecessor the New Beetle, the current Beetle is more in line with the original model with its long, rounded front end and short, fastback-shaped rear. The Beetle’s front receives a minor facelift for 2017, with a revised bumper design and optional bi-xenon headlights. The convertible version is still available, with a power soft top that can be raised or lowered in under 30 seconds. One downside to the convertible, however, is that the top doesn’t fold into the trunk, instead sitting on top of the back end and hindering visibility. There is a cover available to clean up the look, but it’s difficult to use.

For 2017, Volkswagen introduces two new Beetle trims. First is the Dune, which evokes the classic Baja Bug’s trimmed body work, meaty tires, and high ride height. The Dune trim offers a slightly raised ride height, new bumpers with faux skid plates, and dark gold wheels. Unlike the Baja Bug, however, off-roading is not advised, since all-wheel drive (AWD) is not available and the ride-height increase is minimal. The other new trim is the #PinkBeetle, which, as the name suggests, comes with a pink exterior and pink plaid seats, bi-xenon headlights, and a set of 17-inch wheels for the coupe or 18-inchers for the convertible.

The Beetle’s interior resembles that of the original, with a similar dashboard design and panels that match the exterior color. All 4 seats provide ample headroom, although the back seats are best reserved for small kids who won’t mind the lack of legroom. Cargo space measures 15.4 cubic feet in the coupe, and the rear seats can be folded to increase that space to 29.9 cubic feet. The convertible offers 7.1 cubic feet of cargo room and new split-folding rear seats. The standard infotainment system features a 5-inch touchscreen, and higher trims come with a 6.3-inch screen and Android Auto, Apple CarPlay, and MirrorLink capability. Options include navigation and a Fender audio system.

The 2017 Beetle is available with two engines, although most will come equipped with a turbocharged 1.8-liter 4-cylinder engine mated to a 6-speed automatic transmission to produce 170 hp and 184 lb-ft of torque. The Beetle R-Line gets a punchier turbocharged 2.0-liter 4-cylinder that is paired with Volkswagen’s DSG 6-speed dual-clutch transmission for an output of 210 hp and 207 lb-ft. EPA fuel-economy figures stand at 25 mpg city, 33 highway, and 28 combined with the 1.8-liter turbo (all trims except the Dune and R-Line SEL); 24, 31, and 27 with the Dune trim; and 23, 29, and 26 with the 2.0-liter turbo (R-Line SEL trim only).

When it comes to safety, the Beetle receives mostly high marks. The National Highway Traffic Safety Administration (NHTSA) gave the 2017 model a 5-star overall rating. The 2016 Beetle earned a Good rating in most Insurance Institute for Highway Safety (IIHS) test categories, although it scored a Marginal in the recently introduced small-overlap frontal-offset test. All Beetles come with a full set of airbags, traction and stability control, antilock brakes (ABS), and a reversing camera. Classic, SE, and SEL trims get Volkswagen’s Car-Net telematics suite, which will notify emergency services in the event of a crash, locate your stolen vehicle, unlock your vehicle, or call for roadside assistance. Blind-spot monitoring comes standard only on the SEL and R-Line SEL trims.

What's your take on the 2017 Volkswagen Beetle?

TheHorror Time to let this antediluvian handbag pass on, VW.

Users ranked 2017 Volkswagen Beetle against other cars which they drove/owned. Each ranking was based on 9 categories. Here is the summary of top rankings.

Have you driven a 2017 Volkswagen Beetle?
Rank This Car

Looking for a reputable auto transporter

I have emailed a seller twice for info on car that is for sale. There has been no response. Can carguru advise if the vehicle is still for sale and if so, how do I get private seller's telephone n...

HOW CAN I MAKE Advertising

HOW CAN I MAKE AD FOR MY CAR?

Did you have a listing for a VW Beetle convertible in January ? from Palmetto57 VW?