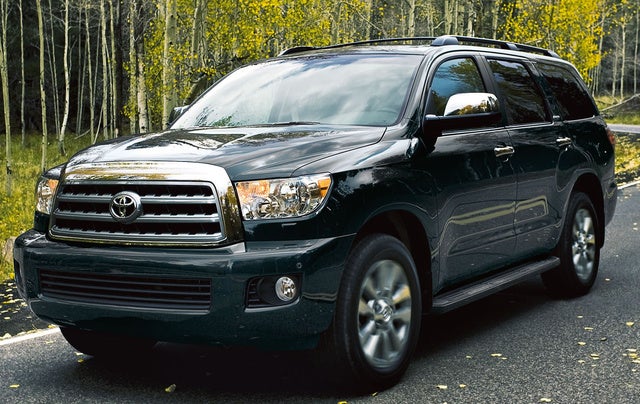 When your midsize 3-row crossover just isn’t enough, Toyota’s full-size Sequoia SUV is worth a closer look. The Sequoia has 3 rows of seating for up to 8 passengers, a V8 powertrain, and off-road capability, along with all the creature comforts and techno-toys demanded by today’s active families. How much potential buyers are willing to overlook the Sequoia’s aging profile and poor gas mileage, though, remains to be seen.

The Sequoia was introduced for the 2001 model year, when full-size SUVs still dominated the highway, and it was refreshed for 2008 with some sheet metal tweaks and technological upgrades. With the declining popularity of the hulking sport ute in favor of the more utilitarian full-size pickup, however, Toyota has made little effort to comprehensively refresh the Sequoia’s looks, performance, or creature comforts.

No changes are scheduled for the 2017 Sequoia, which continues to be offered in three trims: SR5, Limited, and Platinum, with all trims also available in ethanol-friendly Flex-Fuel (FFV) 4-wheel-drive (4WD) sub-trims. The Sequoia is delivered with standard rear-wheel drive (RWD) or an optional part-time 4WD system that sports low-range gearing, a Torsen locking limited-slip center differential, and a rotary knob. Combined with the car’s ride height and off-road-ready suspension, the available 4WD allows this tough Toyota to go where crossovers fear to tread.

Compared with truck-like full-size SUVs like the Chevrolet Tahoe or Ford Expedition, the Sequoia offers a comparatively smooth ride, especially with the Platinum trim’s upgraded shock absorbers. The standard 4-wheel independent suspension gives a surprisingly sure feel to cornering, considering the Sequoia’s Tundra-based underpinnings. Maneuvering this oversize Toyota in tight quarters, though, will be a challenge.

The Sequoia’s cargo area is 120.1 cubic feet with all rear seats folded. For those with passenger concerns, stowage area with the second row up is 66.6 cubic feet, and with both rows up it’s 18.9 cubic feet. Its total cargo-acreage numbers beat the Tahoe’s 94.7 cubic feet and the Expedition’s 108.3 cubic feet, but aren’t quite up to the Chevrolet Suburban’s 121.7 cubic feet or the Expedition EL’s 130.8 cubic feet.

The only powerplant for the Sequoia lineup is a 5.7-liter V8 that puts out 381 hp and 401 lb-ft of torque under the management of a 6-speed shiftable automatic transmission. Mileage estimates are expected to run 13 mpg city, 17 highway, and 15 combined with RWD and 13, 17, and 14 with 4WD, numbers that aren’t exactly budget friendly. Even worse, the estimated fuel-efficiency numbers for FFV Sequoias running on E85 ethanol fuel drop to a pretty terrible 9, 13, and 10. Towing capacity maxes out at 7,400 pounds, and one track test timed the Sequoia Premium sprinting from 0-to-60 in 6.9 seconds, which is about average for its class.

What's your take on the 2017 Toyota Sequoia?

Have you driven a 2017 Toyota Sequoia?
Rank This Car

I want to purchase my car online. The dealership is giving me two options, Cash or Financing, but fill out their financing application. I've already done that thru Capital One and like the terms. ...