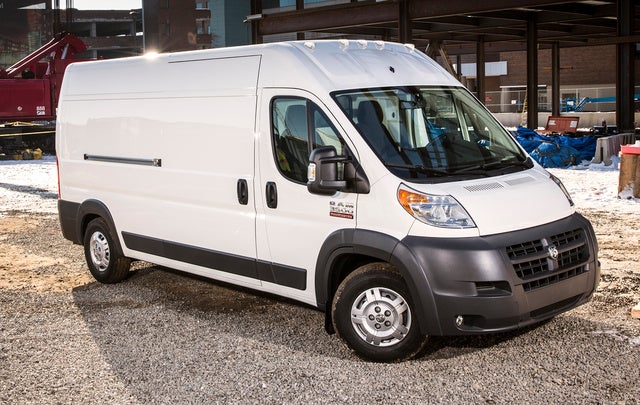 The full-size van, designed and built with the dedicated tradesperson or delivery-service owner in mind, is a fixture on American roadways, and Ram’s 2-passenger ProMaster vans have made an indisputable impact on the segment. Though a bit less versatile and well-equipped than, say, Ford’s Transit, the ProMaster’s attractive pricing and available options would seem to assure it a healthy share of the segment's sales for the foreseeable future.

The ProMaster is currently available in the half-ton 1500, three-quarter-ton 2500, and 1-ton 3500 trims, and 4 trim variations, the Cargo Van, Window Van, Chassis Cab, and Cutaway. The ProMaster Cargo Van is pretty much self explanatory; the Window Van, which features full-length side windows, can be converted into a passenger van with the purchase of separately sold rear seats. All Promasters are available with a low or high roof; the high roof is able to comfortably accommodate folks over 6 feet tall. The ProMaster Chassis Cab and Cutaway each offer an exposed rear frame and heavy-duty rear suspension ready for either a box or dump configuration.

Though Chrysler subsidiary Ram has hinted at some significant upgrades to its lineup of trucks, vans, and SUVs for the 2017 model year, there is currently no indication of what these upgrades will entail or which vehicles might be affected. The capable ProMaster has had a solid sales record since its introduction for the 2014 model year, and no changes have been officially announced for 2017. But Ram does have a template for future changes in the popular Fiat Ducato, Europe’s version of the ProMaster. The current Ducato offers slimmer headlights, available LED interior lighting, enhanced seating options, and a fold-down writing surface with the optional front bench seating configuration.

What the Ducato doesn’t offer is the 3.6-liter V6 powerplant that comes standard aboard the ProMaster. Look for 280 hp and 260 lb-ft of torque from this V6, managed by a 6-speed automatic transmission and with a max towing capacity of 5,100 pounds with the proper equipment installed. An optional 3.0-liter turbodiesel inline 4-cylinder (I4) powertrain can also be selected for all ProMaster iterations. Available with a slightly tweaked version of the 6-speed automatic, the diesel will put out 174 hp and 295 lb-ft of torque, but towing is still maxed out at 5,100 pounds. Because this Ram workhorse is commercially oriented, EPA mileage estimates are not available for either engine.

All current ProMaster iterations are similarly unexciting in both looks and features, as you’d expect from a fleet-oriented van. But the efficient use of space, low step-in height, and user-friendly cabin features all make up for any obvious lack of style.

The ProMaster can be equipped with such options as alloy wheels, power-folding mirrors, a driver-side sliding door, a rear-view camera, rear parking sensors, and cruise control. Heated swiveling seats, upfitter switches, satellite radio, and Bluetooth hands-free communications are also available, as is Chrysler’s Uconnect infotainment, with a 5-inch display and voice texting/voice command features. Uconnect is generally counted among the most reliable and easy-to-use voice-activated infotainment systems available.

There are three options packages for 2017, including a Premium Appearance package with a chrome grille and front fog/driving lights, a Class IV towing package with a trailer hitch and wiring harness, and a handy Cargo Convenience group, which includes a cargo net and wall-mounted tie-down rings.

Keeping the ProMaster and its occupants safe are 4-wheel antilock brakes (ABS), traction and stability control, side-mounted airbags, and head curtain airbags, along with safety options like daytime running lights and a remote antitheft alarm.

Though there’s no definitive word on when the 2017 ProMaster will go on sale, expect it to once again rival the Ford Transit, Nissan NV, and Mercedes-Benz Sprinter during the upcoming model year (the Transit and the Sprinter are more refined, and the NV offers a V8 powerplant).

Ron It needs the updated hood/headlight treatment the European Ducato has. It gets rid of the seriously ugly front end and improves it look a lot! Also add a telescoping and tilt steering wheel.

Have you driven a 2017 RAM ProMaster?
Rank This Car

Are Your Prices Just A Come On To Sucker The General Public Into A Dealers...

i went to one of your dealers and they would not sell me the van for listed price. They told me there was a $1,999 Car Care Service Fee. Are your prices just a come on to sucker the general public i...

67 views with 4 answers (last answer about a year ago)

What Class Hitch Can Be Fitted To This Beast?