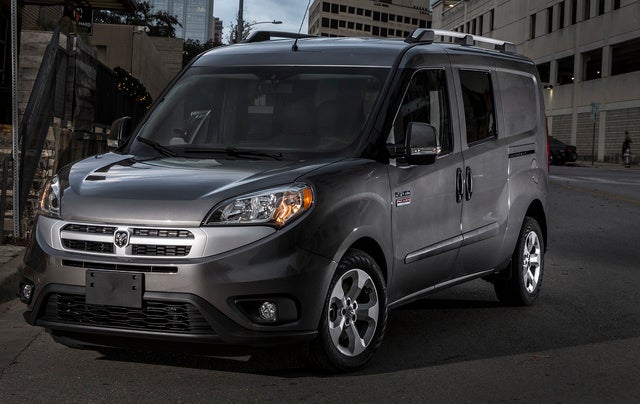 Since the 2015 model year, Ram’s ProMaster City has offered the urban-based tradesman a compact, fuel-efficient work van that boasts some hefty payload capability, a cavernous cargo bay, decent power, and a livable MSRP. The 2017 ProMaster City is expected to continue this tradition virtually unchanged.

That said, several upgrades currently appear on its European counterpart, the Opel Combo, (aka the Fiat Doblo), including restyled headlights, LED interior lighting, and an available front bench seat with a fold-down writing surface. We hope these changes will appear on the ProMaster City soon.

At present, look for the ProMaster City to return in Cargo Van and 5-passenger Wagon variations, with the Cargo Van offered in entry-level Tradesman and up-featured Tradesman SLT trim levels, and the passenger version available in base Wagon and Wagon SLT variants.

All trims are available only with front-wheel drive (FWD), which shouldn’t be a problem on well-plowed urban roads. Payload capacity is expected to mirror the current 1,900 pounds, among the highest in its class.

The 2-seat Tradesman Cargo Van boasts 131.7 cubic feet of total cargo space, while the Wagon sports 74.1 cubic feet behind the second row of seats and 101.7 cubic feet of total hauling capacity with the rear seats folded. A set of 60/40-split rear barn doors ordinarily swing open to 90 degrees, but the release of a hinge-pin allows these portals to open a full 180 degrees.

Standard grunt aboard the 2017 ProMaster City lineup is expected to be a 2.4-liter inline 4-cylinder (I4) powerplant that puts out 178 hp. Under the management of the standard 9-speed automatic transmission, this surprisingly peppy I4 will once again generate 174 lb-ft of torque, with mileage numbers estimated at 21 mpg city/29 highway/24 combined. When properly equipped, the ProMaster City boasts a 2,000-pound towing capacity.

Creature comforts are decidedly low on the typical fleet owner’s list of priorities when selecting a work van, and the ProMaster City is no exception. The usual steel wheels, cloth upholstery, and manual air conditioning are supplemented only by an AM/FM radio with 4 speakers. The ProMaster City SLT adds such standard upgrades as premium cloth upholstery, cruise control, steering-wheel-mounted audio and cruise control buttons, and Bluetooth hands-free calling.

What this Ram seems to lack are the enhanced safety features found on many of its rivals, and there’s still no crash-test data from either the government or the Insurance Institute for Highway Safety for the current ProMaster City model.

In any case, there is not yet any word on when the 2017 ProMaster City will begin showing up in dealerships. Competing models include the Ford Transit Connect, Mercedes-Benz Metris, Chevrolet City Express, and Nissan NV200.

What's your take on the 2017 RAM ProMaster City?

Have you driven a 2017 RAM ProMaster City?
Rank This Car

What Is That Spot In The Middle Of The Floor For? (Ram Promaster City)

Hello all, What's that spot in the middle of the floor for that is in the cargo area of the Ram Promaster City? If the floor is all white and bare metal, then the spot in question is black.

603 views with 6 answers (last answer about a year ago)

This is a service vehicle with 21,000 miles and has stalled 3 times this week within 2-3 minutes after first start in morning. I can restart the engine but have no power for a few minutes. Then I...