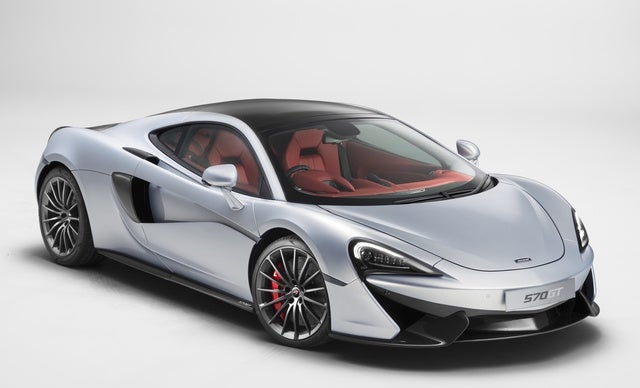 Looking for a Used 570GT in your area?

We’ve all been there. Ready to pull the trigger on a supercar only to realize there’s not quite enough storage space for a weekend getaway. Or that it might make the daily commute faster, but also less comfortable. Or that it’s just too darn noisy.

Okay, so most of us have’t had those concerns. But if you have, the 2017 McLaren 570GT appears to have the answers. The 2-door is based on the 570S coupe and will serve as the grand touring model in the Sports Series lineup, adding, as the McLaren marketing material tells us, “extra comfort and practicality to breathtaking performance.” It will sell for $198,950, about 10% more than its 570S sibling.

Let’s start with the breathtaking and work our way to the practical. The 570GT has that unmistakable McClaren mix of sensually curving lines and a hyper-aggressive, low-slung stance. It’s space art on wheels - 20-inchers in the back and 19 up front, to be precise. There are also the signature dihedral doors that swing upwards to open before closing with an extra-soft touch.

The engine will be a familiar one to McLaren aficionados - the 3.8-liter V8 that also powers the 570S and produces 562 hp and 443 lb-ft of torque. This mid-mounted engine (the only way to truly balance your supercar) sends its power to the rear wheels via a 7-speed seamless-shift gearbox that can be controlled with steering-wheel-mounted rocker-shift paddles.

Normally, all that speed would ride on super-tight suspension under the control of an ultra-sensitive steering setup. But the suspension has been adjusted to act appropriately in everyday situations (spring rates reduced by 15% in the front and 10% in the rear). Same with the steering, which will help smooth driver input instead of overreacting to it.

The brakes have also been toned down, from carbon-ceramic to iron discs, which provide optimum feel and tend not to squeal like the ceramic variety. McLaren has further reduced noise in the 570GT by lowering the volume on the exhaust and swapping extra grippy (and extra loud) tires for Pirelli P-Zero tires, which minimize road noise with special foam technology.

The change McLaren seems most excited about is the addition of a rear cargo space the company is calling a “touring deck.” This area is upholstered with leather and provides an additional 7.8 cubic feet of cargo space for a total of 12 cubic feet in combination with the front trunk. The touring deck is behind the seats and can be accessed from either the cabin or a rear side-opening glass hatch. Yes, this McLaren is a hatchback.

There’s more smart use of glass with a standard panoramic sunroof. Not only does this make the cabin feel airier and roomier, it actually does increase headroom over the 570S. The sunroof and touring deck also mean a less aerodynamic profile than the 570S, so the GT has a higher lip rear spoiler to provide more downforce and stability.

The interior maintains a race-car feel, but with enough comforts to keep it from feeling stark. There are power-adjustable and heated seats, an electronic steering column, high-grade leather trim, a 7-inch touchscreen for the infotainment systems, and an available 1,280-watt 12-speaker Bower & Wilkins sound system specially designed for the 570GT.

Users ranked 2017 McLaren 570GT against other cars which they drove/owned. Each ranking was based on 9 categories. Here is the summary of top rankings.

Looking for a Used 570GT in your area?