None of the 2017 Mazda MX-5 Miata’s rivals offer the option of coupe or power retractable hardtop. Not the Subaru BRZ or Toyota 86. Not the MINI Cooper S or even the Miata’s cousin, the Fiat 124 Spider. 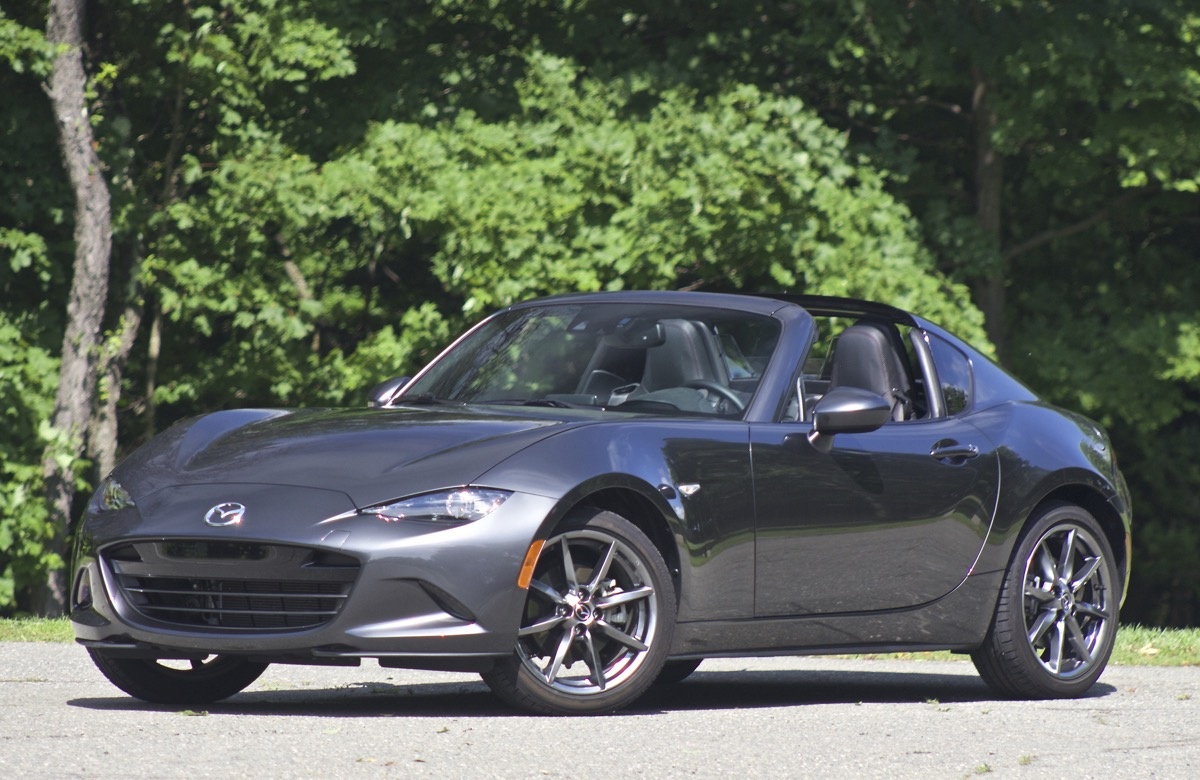 You may have heard that we’re in a Golden Age of Muscle Cars, but while you weren’t looking, we also entered an amazing time to be a fan of affordable performance. And the Mazda MX-5 Miata embodies the spirit of this genre.

The Miata competes with some seriously fun cars, including the Fiat 124 Spider, MINI Cooper, Subaru BRZ, and Toyota 86. All offer plenty of corner-carving abilities at the same price as a well-equipped commuter car. One of the best examples is the hard-driving Subaru BRZ, but the MX-5 Miata has a level of interior and driving refinement that Subaru can’t match.

In this batch of fun, small cars, the Miata has a new trick up its sleeve, called the Miata RF or “Retractable Fastback.” It is a retractable hardtop, but it’s also so much more than that. 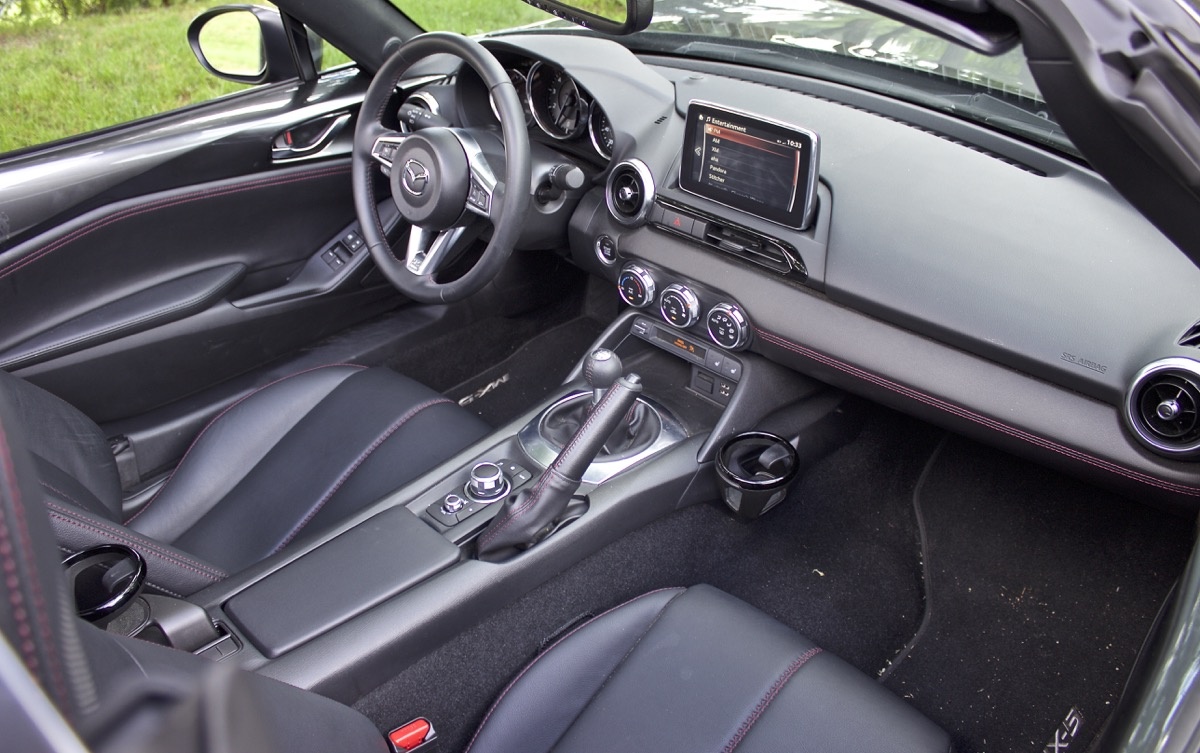 Mazda has offered a removable hardtop as far back as the first-generation Miata. It was a clunky, solid unit that didn’t fit in the Miata’s trunk. Owners needed a place to store the top when not using it, which seriously impeded on the car's usability to anyone trying to drive the Miata as a fun city car.

With the third-generation NC Miata (generations are named NA, NB, NC, and ND), Mazda finally offered a power retractable hardtop. Despite conventional wisdom, it added just 79 pounds to the roadster. That’s well worth it for all-season protection. The only setback was that with the top up, the Miata had an ungainly bubble roof and wasn’t as elegant as the soft-top roadster.

That is not the case for the all-new Miata RF. It features a gorgeous flowing design that at first glance looks like an actual fastback. In reality, it's more of a targa top, and only the roof panel stows out of sight. The rear quarter windows are really just black plastic, and the rear glass is mostly vertical, rather than following the silhouette of the buttresses.

Inside, the cabin is identical to that of the soft-top Miata, save for the switch operating the power top. The soft-top Miata is fully manual, with no power gear, and a large release lever atop the windshield, above the rear-view mirror. The layout is a blend of form and function and features a good amount of plastic, which makes sense for a cabin that will be exposed to the elements.

Trims for the Miata roadster are Sport, Club, and Grand Touring. The RF skips the base Sport trim and is instead offered in Club, Grand Touring, and Launch Edition versions.

The entry-level Sport trim is offered only on the roadster. It provides push-button start, a leather-wrapped steering wheel and shifter knob, a USB port, and Bluetooth hands-free calling and streaming music all as standard equipment.

The Club trim adds everything from the Sport, plus the 7-inch Mazda Connect infotainment screen, a 9-speaker Bose audio system, dual USB ports, and blind-spot monitoring with rear cross-traffic alert.

For 2017, there’s also a Launch Edition for the Miata RF. It features everything from the Grand Touring as well as an exclusive hand-painted black roof, Machine Grey Metallic paint, and Auburn Nappa leather interior. Mazda will produce only 1,000 Launch Editions. 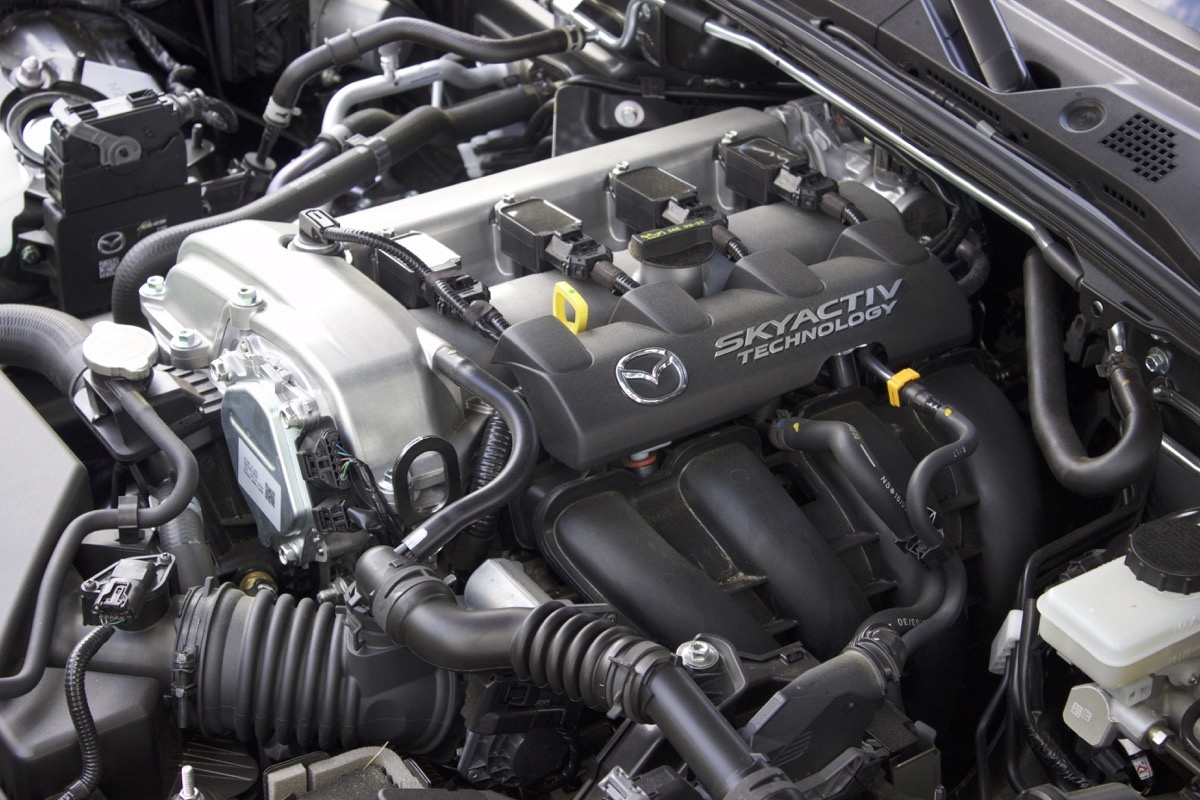 Regardless of trim or model selected, the Miata is fitted with a 2.0-liter inline 4-cylinder, developing 155 horsepower and 148 pound-feet of torque. That might seem light in the output department, but the Miata roadster’s curb weight is just a little over 2,300 pounds, so 155 hp is more than enough. Like the NC Miata, the power hardtop incurs a minimal weight penalty. The mechanism and added body panels add only about 113 pounds to RF trims.

The 4-cylinder engine sends power to the rear wheels through one of the best manual transmissions available in a car today. It’s incredibly smooth, yet direct, and shifts from one gear to the next with impossible ease.

A 6-speed automatic transmission is also available, but that means missing out on the essence of the Miata. There’s nothing like being able to row your own gears as you accelerate up a highway onramp or downshift as you enter a corner.

One reason to opt for the automatic would be its fuel economy. Both transmissions get 26 miles per gallon city and 29 combined, but the automatic gets 35 mpg on the highway, while the manual gets only 33.

The cornering and handling of the Miata has been highly praised, but it leaves something to be desired for hardcore performance drivers. The Miata is made for empty nesters as much as it is for drivers, so it does have a bit of body roll.

Once the MX-5 makes that lean, the cornering is fantastic. In any position, the steering is direct and responsive. Some driving enthusiasts would enjoy this car more with stiffer aftermarket shocks and springs. Those drivers could also get a Subaru BRZ, which is set up for hard cornering straight from the dealer. 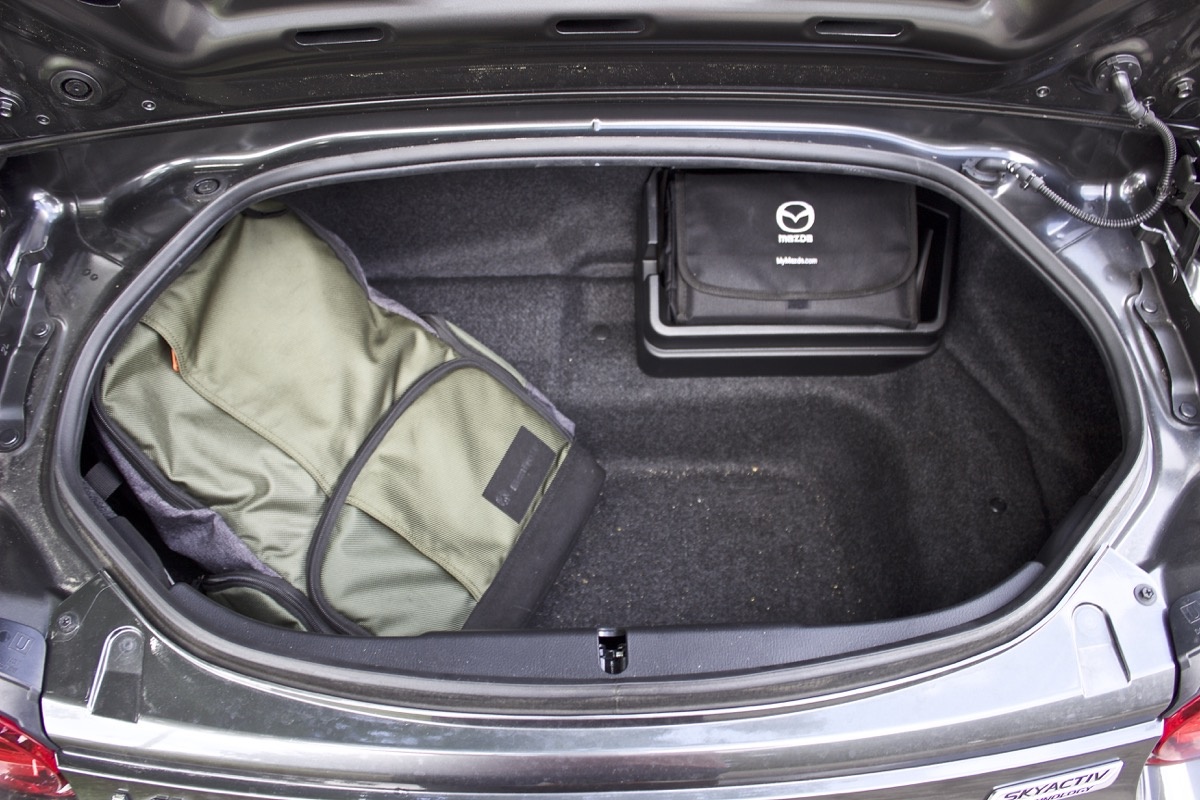 Taller drivers, consider this: The roof of the RF is less than a half-inch taller than that of the roadster. It’s a tight fit with the top up, but that extra fraction of an inch means the head of some taller drivers won’t bang into the hardtop roof. You’ll want to set up your seat so you are low enough first. Otherwise, you will have to tilt your head as the top fits into place.

When you want to lower the roof, a switch in the center stack raises the buttresses, the front half of the decklid, and the crossmember all into the air. The roof panel and rear window stow down behind the rear seats, and the remaining moving parts settle back to their original positions.

It’s a complicated-looking process that seamlessly transpires in all of 12 seconds. You can drop or raise the roof at speeds up to 6 mph, so basically only when you’re sitting in traffic.

Inside the cabin, the Miata has a terrific cockpit design and driver controls. The largest dials are the climate controls—crucial when driving in summer heat. It is all about basics, and that makes controls and switchgear very easy to use.

The trunk of the Miata roadster has just 4.95 cubic feet of cargo space. The RF has even less, at 4.48 cubic feet.

The Miata has only a minuscule glovebox and an even smaller center console. The center console might be large enough for a wallet or keys, but not both. There is a cubby between the seats near your shoulder. This is the largest in-car storage area and offers a solid spot for a purse or small bag.

If you care about things like cupholders, the Miata has two, with three places for them. These are modular cupholders that can reside in one of two slots between the seats, or a passenger-side slot near the center stack. Space is tight, but Mazda makes the most of it. 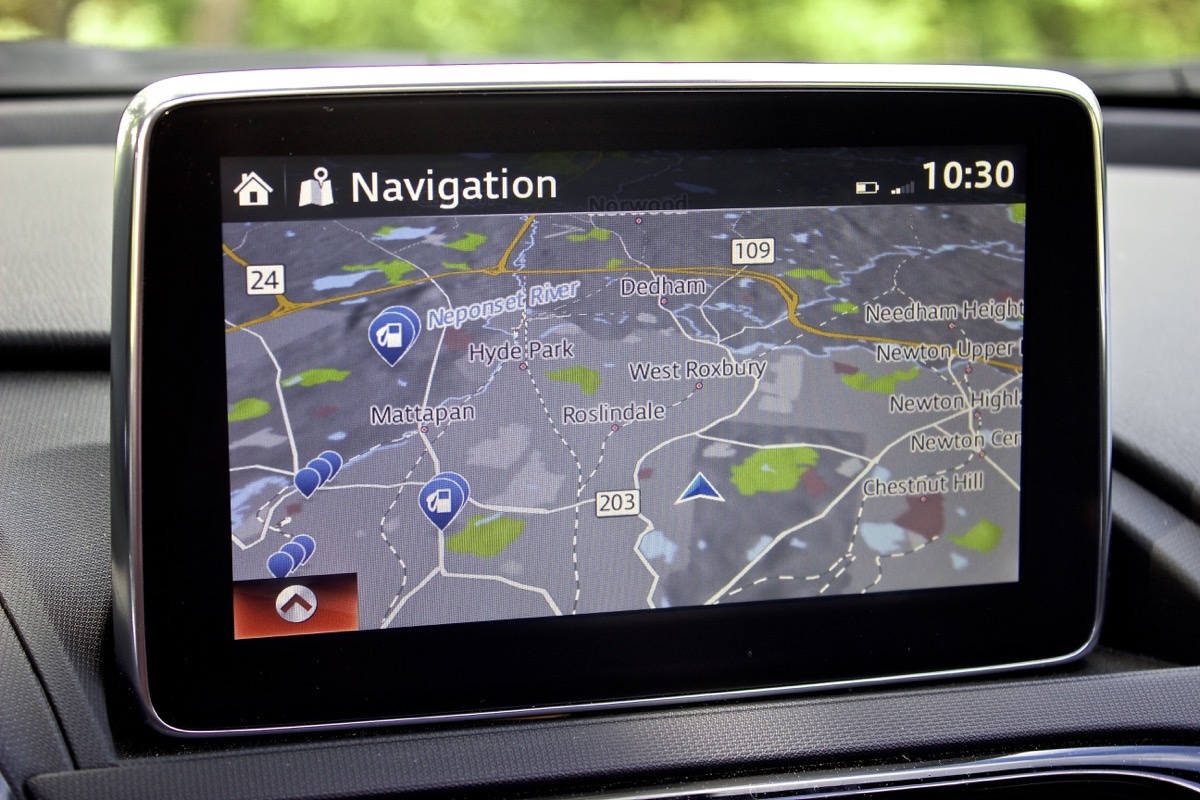 Everything else in the cockpit aside from the climate controls is operated via the Mazda Connect controller. That includes the stereo, Bluetooth, and available features like Mazda’s navigation system. The dial is incredibly easy to use, and features a Home button and large icons for each of the main systems. When you come to a complete stop, the Mazda Connect screen turns into a touchscreen.

You’ll want to save all your presets under the “Favorites” menu and do it before you embark on a drive. Then you can simply cycle through them using the Mazda Connect dial or toggles on the steering-wheel-mounted audio controls.

The dial works, but it would be a lot better if you could use both the touchscreen and the dial at all times. Because of that lockout feature, the Miata loses points. 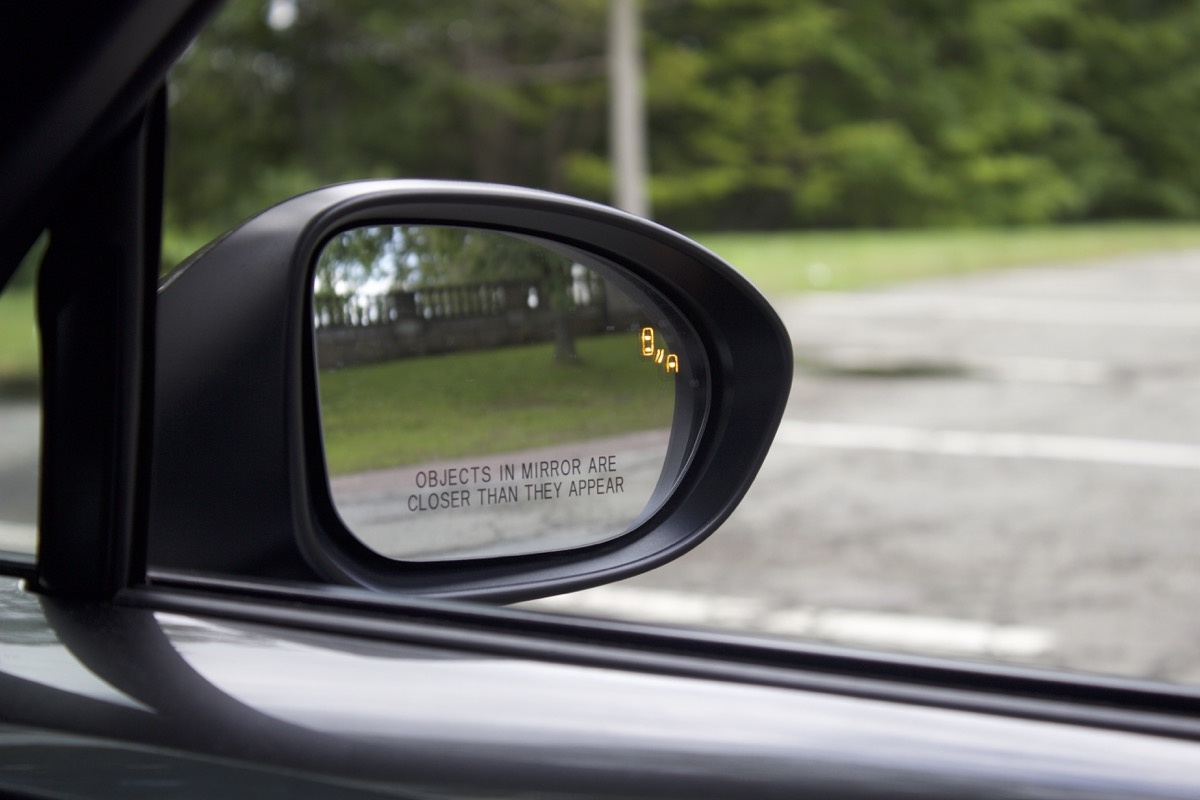 Standard features on all Miatas include a full array of front- and side-impact airbags, rollover bar construction, and a tire pressure monitoring system.

The Miata Roadster Club and RF Club come with blind-spot monitoring and rear cross-traffic monitoring. These features are helpful, because the rear quarter windows are actually fake plastic. They don’t obstruct a ton, but they do create a small blind spot that isn’t there when you drop the top on the roadster.

Our Grand Touring test version also came with lane-departure warning and adaptive front headlights that turn with the steering wheel. Still, it has no reversing camera, which is kind of a big deal. Even with the sight lines of the roadster, you can’t see below the trunk, and reversing cameras are offered on many new compact and economy cars. This is a glaring omission from a safety standpoint. 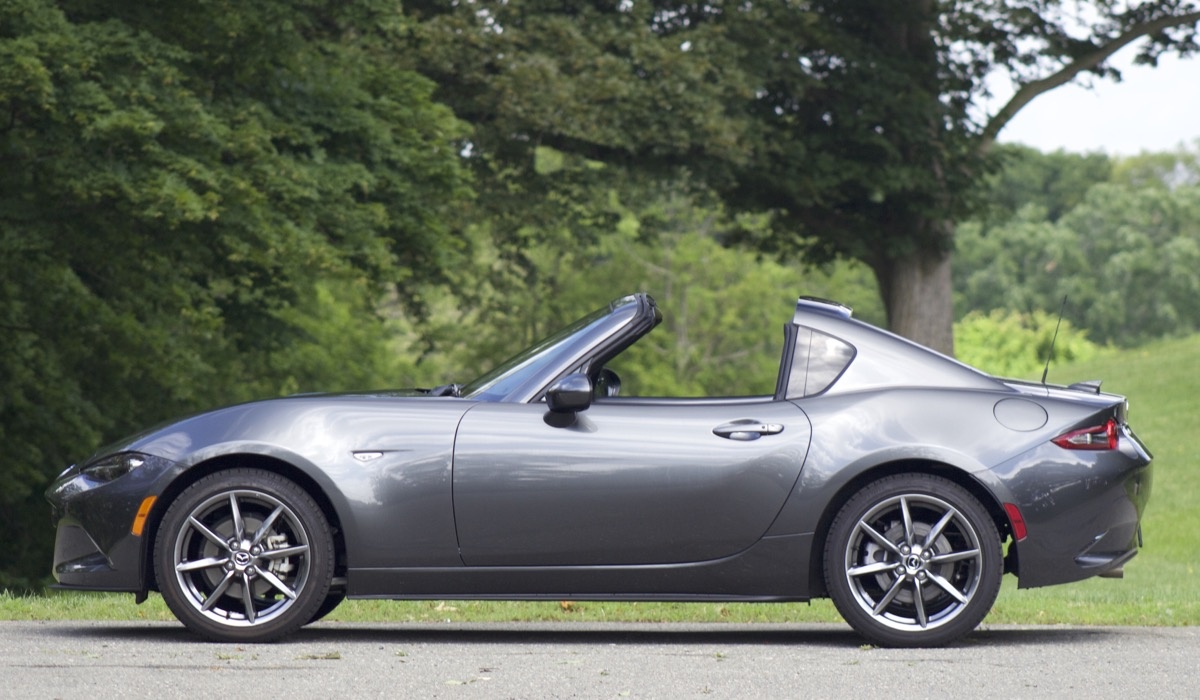 Our Grand Touring test model, with destination and options like the Machine Gray Metallic paint and keyless entry, comes in at $33,925. That price doesn’t even include a reversing camera, which might be cause to wait for 2018, when that will be mandatory on all cars.

For a Grand Touring, you really have to love the creature comforts to justify the price. But if you just want a purist driving experience, the sub-$25,000 price of the Miata roadster is the ideal performance bargain. That leaves higher trims and the RF as aspirational versions.

Mazda has done something quite clever with the Miata RF. Its past hardtop offered practicality for a price. But now, with its amazing silhouette, the RF bakes in style, too. It’s not just the added protection from the elements, but a design statement all its own.

GuruWP9QY No way no HP and very little torque,

Users ranked 2017 Mazda MX-5 Miata against other cars which they drove/owned. Each ranking was based on 9 categories. Here is the summary of top rankings.

What Is A Reasonable "Processing" Fee From A Dealership On A Pre-owned Car?...

I have had an ongoing problem with my 2017 MX-5 RF. whereby it loses its charge after only a week or two (max) of non use. This is my 4th Miata (having owned one of each previous generation) and never...

My 2017 MX5 RF comes with a jack lever -- even though there is no jack included with this model. What is it supposed to be used for? I've found no reference in the owner's manual and the dealer's ...

Are the standard rims on a Miata silver or black? I have seen pictures that look like both colors, but I see no options available or clear descriptions on Mazda's website. Can you help?