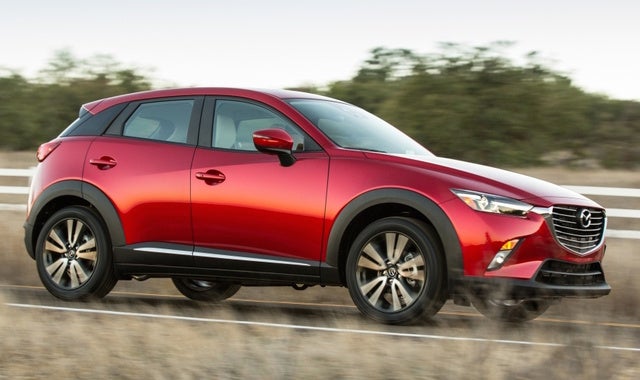 The Mazda CX-3 has had quite a coming-out year since it was introduced for 2016, going so far as to become a top-three finalist for the 2016 World Car Design of the Year award (a fellow Mazda, the MX-5 Miata, took the top prize). Praised for its looks, its handling, its practicality, its value—it’s as if Mazda put its larger (and now discontinued) CX-7 crossover through a reducing process, paring away impracticality and bulk to leave a smaller, purer concept of what a pragmatic driver’s car should be. Now, the CX-3 enters its second model year with the same base pricing—so you don’t have to miss out on a great deal—and a lower starting cost for Mazda’s optional suite of safety technology.

Somewhere between a hatchback and a crossover, the CX-3 competes with other “subcompact crossovers” such as the Fiat 500X, Buick Encore, Jeep Renegade, Chevrolet Trax, and Nissan Juke. This category represents a newer take on the wildly popular crossover segment, as automakers seek to apply a successful formula to other parts of their lineups. Think of it this way: crossovers could be seen as an attempt to downsize unwieldy, gas-guzzling SUVs; subcompact crossovers are more an attempt to beef up everyday hatchbacks and sedans, make them roomier and a little more capable (or a little “cooler”).

The CX-3 stands out in the subcompact crossover segment thanks first and foremost to its remarkable styling. This styling has grown out of Mazda’s “KODO: Soul of Motion” design philosophy, which seeks to depict energy turning into motion, meaning flowing body lines combined with powerful, muscular stances. Essentially, the vehicles are meant to be taken as works of dynamic art in themselves. KODO is an interesting approach, revealing as it does a seriousness of design one doesn’t always expect from a mainstream automaker. But it has paid off for Mazda nevertheless, with the CX-3 and Miata outdoing finalists from the likes of BMW, Cadillac, and Mercedes-Benz in the above-mentioned design awards. Rest assured that with the CX-3 you’re getting an extremely good-looking car.

The 2017 CX-3 comes in three trims, the Sport, Touring, and Grand Touring. Mazda’s predictive i-Activ all-wheel-drive (AWD) system is available on all trims for an extra cost. Thanks in large part to the i-Activ system, the CX-3 actually won the “Best Compact Utility Vehicle” award at the Northwest Automotive Press Association’s annual Mudfest testing event. This is especially impressive seeing as the CX-3 has only 6.22 inches of ground clearance (serious off-road vehicles generally have closer to 10). The i-Activ system is predictive, able to sense changes in driving conditions and adjust accordingly before the driver has to do so.

All CX-3s are powered by Mazda’s SkyActiv 2.0-liter 4-cylinder engine, mated to a 6-speed automatic transmission for 146 hp and 146 lb-ft of torque, adequate power for a non-performance-oriented vehicle of this size. There is no manual transmission available, though that’s not particularly surprising on a subcompact crossover. Fuel economy for the 2017 model is estimated at 29 mpg city/34 highway/31 combined with front-wheel drive (FWD) and 27/32/29 with AWD.

Starting under $20,000, the base Sport trim comes decently equipped with features like a 7-inch touchscreen with the Mazda Connect infotainment setup and a 6-speaker audio system. The Touring adds 18-inch alloy wheels (new for 2017), leatherette and cloth seating surfaces, and blind-spot monitoring and rear cross-traffic alert—expect to pay about $2,000 more for this trim. Then there’s the Grand Touring, which is very well equipped, especially considering it still starts under $25,000; it adds leather and Lux suede seats, adaptive LED headlights, navigation, automatic climate control, paddle shifters, and a head-up display. A Touring Premium package adds a Bose 7-speaker audio system, power moonroof, satellite radio, and a cargo cover to the Touring, though at that point it’s probably worth considering a straight upgrade to the Grand Touring.

Only available on the Grand Touring, Mazda’s i-ActivSense safety package comes cheaper this year, at $1,790 rather than $1,920. This package includes cruise control, lane-departure warning, high-beam control, rain-sensing windshield wipers, and a forward-collision prevention and mitigation system. Otherwise, the CX-3’s safety features are fairly run of the mill, though a rear-view camera comes standard on all trims (plus the blind-spot and rear cross-traffic alerts on the Touring and Grand Touring). The CX-3 also has a terrific crash-test record, garnering 5-star ratings on all but rollover tests (4 stars) with the National Highway Traffic Safety Administration and an exemplary 2016 Top Safety Pick+ rating from the Insurance Institute for Highway Safety.

Users ranked 2017 Mazda CX-3 against other cars which they drove/owned. Each ranking was based on 9 categories. Here is the summary of top rankings.

I want to search for PRIVATE SELLERS. why don't you have a button or filter for that type of search? because you are paid by dealers?