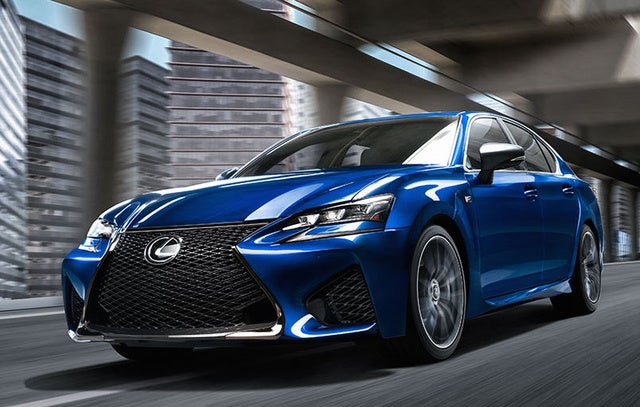 Looking for a Used GS F in your area?

The GS F is the fourth model in Lexus’ “F” performance lineup, which is in the same vein as BMW’s M cars. A significantly tweaked version of the popular GS sedan, the GS F was introduced for the 2016 model year to compete with the likes of the BMW M5, Cadillac CTS-V, Audi RS 7, and Mercedes E63 AMG. The 2017 model starts at $83,940, and since the options list isn’t too extensive, the price won’t go much higher than that.

The 2017 GS F’s exterior styling is characterized by a revised front fascia, LED lighting, wider fenders, and the nifty, diagonally placed quad exhaust tips that have become something of a Lexus F trademark. Under the hood is a 5.0-liter naturally aspirated V8 engine (also used in the 2-door RC F) that makes 467 hp and 389 lb-ft of torque and features an oil cooler. Like most V8s, the GS F’s engine sounds great at full song, and the car pipes additional exhaust sounds into the interior through front and rear speakers (though this can be turned off if desired). The engine is mated to an 8-speed paddle-shifted automatic transmission that sends power to the rear wheels, and it will get the 2-ton GS F to 60 mph in 4.5 seconds.

Those are certainly serious numbers, and the GS F is a lighter car than the equivalent M5 and CTS-V. But for the price, this Lexus is in competition with sedans that have mostly forced-induction engines and can handily best it in a race. Additionally, the GS F’s gearbox isn’t a dual-clutch unit, as is commonplace in performance cars these days, so shifting just isn’t as quick. Fuel economy is an unremarkable 16 mpg city, 24 highway, and 19 combined.

Inside the GS F, the driver can use the Drive Mode Selector to toggle between Normal, Sport S, Sport S+, and Eco modes. Compared to the standard GS, the GS F has more bracing in the chassis, a stiffer and more advanced front suspension, a multi-link rear suspension, ZF Sachs shock absorbers, and Brembo brakes with 15-inch rotors up front and 13.6-inch rotors in back. It also features an electric, clutch-actuated torque-vectoring differential system that works quite well on the track and offers Standard, Slalom, and Track settings. New for 2017 is an adaptive variable suspension, which provides better dampening and handling. Since this is a performance-oriented sedan, however, the ride is on the stiff side.

The normal GS is a solid luxury car that has been praised for its high-quality fit and finish, and the GS F adds sporty touches like aluminum pedals, a perforated-leather steering wheel and seat upholstery, and Alcantara and carbon-fiber trim. A joystick-style Remote Touch system is standard and operates the 12.3-inch infotainment screen. The Lexus Safety System+ is also included and comes with adaptive cruise control, forward-collision warning with pedestrian detection, automatic high beams, and lane-departure warning with lane-keep assist. The 2016 GS sedan received Good scores in all tests conducted by the Insurance Institute for Highway Safety (IIHS), so the GS F should be at least as safe.

Like the RC F, the GS F is hardly the leader of the luxury performance car pack—in fact, it lags fairly far behind much of the competition in several respects. But Lexus’ build quality and reliability are overall top notch, and the GS F offers enough luxury and speed to satisfy just about anyone.

Looking for a Used GS F in your area?

How To Install A Dash Cam

Has anyone installed a dash cam on the Lexus GS F?

I am a current BMW owner, ready to go to Lexus based upon reported level of trim and reliability. However, I do not know how to interpret the model designations. I am mostly interested in relia...