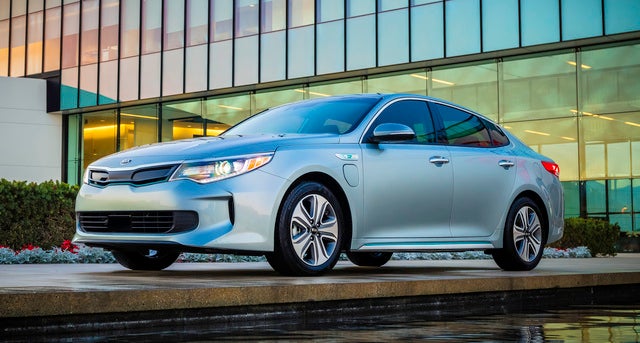 Looking for a Used Optima Hybrid Plug-In in your area?

Just unveiled at the Chicago Auto Show, Kia’s all-new Optima Plug-in Hybrid goes on sale for the 2017 model year. This means Kia has now joined its corporate sibling, Hyundai, along with Toyota, Chevrolet, Ford, BMW, and others, in offering plug-in technology in part of its lineup. The Optima Plug-in Hybrid was unveiled alongside the all-new Niro Hybrid and a new version of the normal Optima Hybrid.

As with the regular Optima, the Plug-in Hybrid's wheelbase and overall length have been increased by almost half an inch, but its exterior will now sport unique trim pieces and badges and special alloy wheels. Whereas the Optima is normally built in Kia’s Georgia factory, the Plug-in Hybrid is assembled in South Korea, and for now it is only available in one trim, the EX.

Under the hood, the old 2.4-liter 4-cylinder (I4) has been replaced by a 2.0-liter 4-cylinder with direct injection, coupled to a 6-speed automatic gearbox. The I4 is good for 154 hp on its own, but added electric power boosts its total output to 193 hp. The electric power is transmitted through a 50 kW motor mounted on the transmission, reportedly 42% more powerful than the electric motor in the previous Optima Hybrid. Other changes to the powertrain (in addition to the plug-in system) include a new electric oil pump and water cooling for the transmission. The battery pack also makes 60% more energy than the old Optima Hybrid, allowing the car to travel an impressive 27 miles in full EV mode. Thanks to all this attention to efficiency, including a sleek shape that has the same drag coefficient as a Tesla Model S, the Optima Plug-in Hybrid can go a full 600 miles on a full charge. Fuel economy figures haven’t yet been released, but the outgoing regular Optima Hybrid could do 38 mpg combined, so expect the Plug-in Hybrid to do even better.

The Optima Plug-in Hybrid can also fully charge in less than three hours with a 240V charger, and a little less than nine hours with a 120V charger. After setting off down the road, the driver can choose between All-Electric Mode, Hybrid Mode, and Charging Mode--this last mode directs more energy to the battery than normal so that it charges faster. The car also features a system that uses a blinking icon and audible alert to coach the driver on when to coast and brake (and which sounds, frankly, a little distracting).

Other technology in the cabin includes Android Auto and Apple CarPlay capability, as well as a Verizon connectivity system and smartphone app with LTE wireless that features remote start/stop and remote cabin temperature setting, not to mention the ability to help you locate nearby charging stations. The sound system is a Harman Kardon 10-speaker setup with a 630-watt digital amplifier. There's also significantly more usable cargo space than in the old Optima Hybrid, thanks to a relocated battery pack and 60/40 split-folding rear seats.

While the Optima Plug-in Hybrid packs a lot of technology into its powertrain and convenience features, it also brings a lot of modern safety wizardry, including autonomous emergency braking, blind-spot detection, lane-departure warning, front-collision warning, and advanced smart cruise control. As a new car, it hasn’t yet been crash tested, but last year’s Optima got top marks from the Insurance Institute for Highway Safety, so we can assume the Plug-in Hybrid version will do just as well.

The Optima Plug-in Hybrid is a big step for Kia, and an important part of the company's commitment to increasing fuel efficiency across its entire range--the stated goal is to be 25% more fuel-efficient across all models by 2020. While a little bit late to the game, Kia's new plug-in hybrid might very well tempt some buyers away from its Japanese rivals. Kia has stepped up its game in a huge way over the past several years, moving away from cheap basic cars and towards well-equipped, genuinely good vehicles that attract a wider variety of buyers. The Optima has arguably most boosted Kia’s image, and the Optima Plug-in Hybrid just boosted it a little more.

Have you driven a 2017 Kia Optima Hybrid Plug-In ?
Rank This Car

Looking for a Used Optima Hybrid Plug-In in your area?