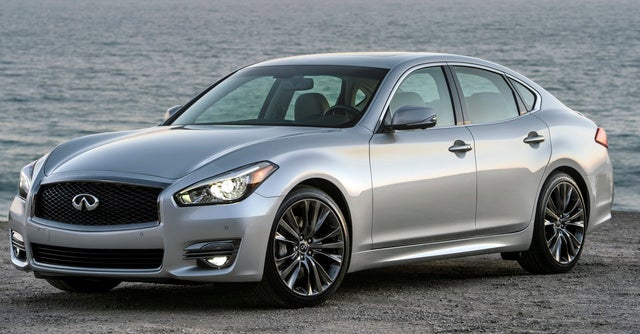 Known as the M before 2014, when Infiniti made name changes throughout its model range, the Q70 sedan is not the freshest design in comparison to competition like the BMW 5 Series and Jaguar XF, and 2017 brings very little in the way of change. The Q70 is also not nearly as popular as its best-selling smaller cousin, the Q50. That said, the Q70 is an aesthetically pleasing and enticingly priced entry into midsize luxury. It's actually available as three separate models, including the standard Q70, the long-wheelbase Q70L, and the Q70 Hybrid.

Small turbocharged fours have been sweeping the market for a few years now, but it is not so with the Q70, which still employs a chunky, torque-y V6 even in its base trim. Base-equipped Q70s come with a 3.7-liter V6 that makes 330 hp and 270 lb-ft of torque, while higher-range trims get a big 5.6-liter V8 that makes a whopping 420 hp and 417 lb-ft of torque. Nissan’s 6-cylinder engines generally sound glorious, and the Q70's V6 has a crisp exhaust note even if it's a bit quieted down for its luxury-car application. The V8 is also a lot quieter than it could be, but has a nice snarl to it under hard acceleration. The standard transmission is a 7-speed automatic with optional paddle shifters. The Q70’s performance doesn’t exactly set it far above much else in its price range, but it has more than enough power for a little fun. The V6 car will do 0-60 mph in about 5.7 seconds, while the V8 will do it in about half a second less.

As for fuel economy, the Q70 can be appropriately described as thirsty. Even the hybrid’s 29 mpg city/34 highway figures aren’t exactly stupendous, but they look great next to the standard 3.7-liter V6’s 18/26 and the 5.6-liter V8’s 16/24. These figures even drop a point or two when you opt for all-wheel drive (AWD) instead of the standard rear-wheel drive (RWD).

The Q70 has been praised for sharp handling that doesn’t compromise on comfort, especially with RWD, and another bit of its increasingly old-fashioned technology is the hydraulic (rather than electronically assisted) power steering. Many drivers, however, actually prefer a hydraulic system. An available sport package adds 20-inch wheels, enhanced cooling, 4-wheel steering, a sport steering wheel and sport seats, and aluminum pedal trim.

The Q70 is a step up in terms of size, performance, and price from the popular Q50, so the interior is naturally a step up as well. The front seats are 10-way power adjustable, and there is active noise cancellation and a refreshed infotainment system with Apple CarPlay. Trims with the 5.6-liter engine add the otherwise-optional Premium package, which includes navigation, voice controls, leather seats, cooled front seats, rear parking sensors, a heated steering wheel, and a 10-speaker Bose audio system. A Deluxe Touring package, meanwhile, adds a 16-speaker Bose system as well as a power rear sunshade and wood trim.

As for safety, the Q70 has received 5 out of 5 stars in federal crash testing, as well as a commendable Top Safety Pick+ from the Insurance institute of Highway Safety. Dynamic cruise control, a rear-view camera, parking sensors, adaptive headlamps, and blind-spot and lane-departure warning systems are all available, as are a surround-view camera system, backup collision warnings, and forward collision warning with automatic braking.

The Q70 combines good looks, ample power, sharp driving dynamics, and a combination of high tech and comfort in the cockpit. In truth, though, this segment is full of cars with exactly those attributes. The established German brands have been perfecting this kind of car for years, and in most comparison tests the Q70 comes up as an also-ran. It’s not just the Germans, either, since both the Jaguar XF and Cadillac CT6 also offer fairly fresh, tempting designs. Since 2017 features minimal changes to the Q70l, it will yet again fail to stand out from the crowd. But even so, its price comes in at less than most of its rivals, and it’s comparable enough to them that it’s still a car worth considering.

Cal2k The best sedan I ever drove

Im Interested In Buying A Specific Car And I Wont Be Able To Until May, I W...

basically my money is on hold intill mid or end of may, and i would like to purchese this specific car