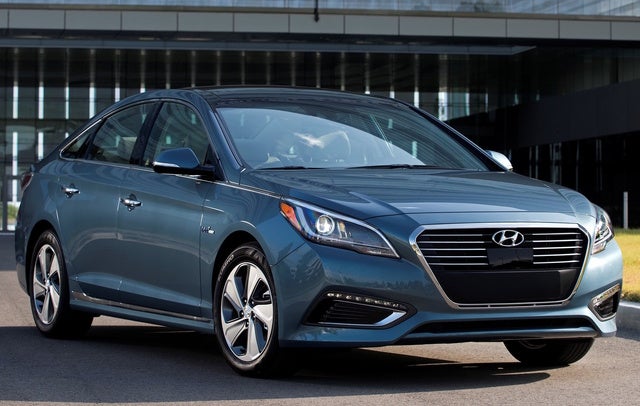 Buyers searching for ways to stretch their gasoline dollars will want to take a good look at the 2017 Hyundai Sonata Plug-In Hybrid, which combines the best attributes of a gas-powered sedan with the cutting-edge efficiency of an electric vehicle (EV). It's also a viable alternative for those thinking of going full electric but who aren't quite ready to take the plunge. Now entering its second year of production, the Sonata Plug-In Hybrid gets some new exterior colors and upgraded connectivity features for 2017.

The plug-in hybrid concept is simple and, as Spock might say, “logical.” If you're just dashing around town doing some quick errands, the Sonata Plug-In Hybrid can run on full electric power for up to 27 miles—enough to pick up the groceries, the dry cleaning, and the kids at school. If you're headed out on a longer trip, it uses both gas and electric to extend the driving range to 590 miles, so you'll be able to cruise past all those gas stations on the interstate for hours at a time. Hyundai notes that the average daily commute is less than 12 miles and the average road trip checks in at a little more than 300 miles, putting both well within the parameters of a single charge or fill-up. And on top of all that, you get all the good looks, styling, and features that come with Hyundai's popular Sonata midsize sedan.

A number of features distinguish the Sonata Plug-In Hybrid from the lower-priced (by about $8,000) Sonata Hybrid. Both are equipped with the same 2.0-liter 4-cylinder gas engine generating 154 hp and 140 lb-ft of torque. Both also come standard with a 6-speed Shiftronic automatic transmission, rather than the continuously variable transmission (CVT) typically found in hybrids, and ride on the same front-wheel-drive (FWD) platform. But while the Hybrid gets a 38-kW electric motor, good for an extra 51 hp and 151 lb-ft for a total output of 193 hp, the Plug-in Hybrid upgrades to a 50-kW electric motor producing 67 hp, which boosts the total horsepower to 202. In addition, the Plug-in Hybrid receives a larger 360-volt lithium-ion battery pack, compared to the Hybrid's 270-volt battery.

The differences between the Sonata Plug-In Hybrid and the Sonata Hybrid powertrains serve specific purposes. The Hybrid's electric motor augments the gas engine, improving fuel efficiency and pushing the mileage to 39 mpg city, 45 highway, and 42 combined. In combined gas/electric hybrid mode, the Plug-in Hybrid's fuel-economy numbers fall a little short of that, at 39 mpg combined, but when traveling on electric power alone, it shoots up to 99 mpg-e combined. Both variants can travel at speeds up to 75 mph on just electric power, although the Plug-in can go much further on electric than the Hybrid, and both revert to standard gas operation when the battery is depleted.

Like all typical hybrids, the Sonata Plug-in Hybrid uses regenerative braking to charge its battery, which assists with acceleration for short distances until the gas powerplant kicks in and adds additional muscle for passing and merging at highway speeds. Owners can charge the battery at home in less than 3 hours using a 240-volt outlet and a supplied cable or in less than 9 hours using a standard 120-volt wall outlet. The Plug-in Hybrid can also be recharged at public charging stations, and owners can use Hyundai's Blue Link app to remotely schedule in-home charge times during periods when lower electric rates apply.

Because it uses less fuel overall, the Sonata Plug-in Hybrid has a smaller gas tank than the Hybrid variant, by a little over a gallon (14.53 gallons versus the Hybrid's 15.85-gallon tank). It also has a higher curb weight (3,787 pounds compared to 3,497 pounds for the Hybrid), due in part to its larger battery. In addition, because the Plug-in Hybrid's battery is located under the floor of the trunk, cargo space drops to 9.9 cubic feet, compared to the Hybrid's 13.3 cubic feet.

Hyundai’s hybrid Sonatas provide buyers with a choice when it comes to operation and efficiency—those who want to push overall fuel-economy numbers but don't want the hassle of a plug-in will likely opt for the Hybrid, while those who prefer being able to travel longer distances on electric power will be more interested in the Plug-in Hybrid. As with all hybrids, both sacrifice some performance in favor of fuel economy. Test drivers liked the comfortable ride and noted that both sedans performed well in urban driving situations, with smooth transitions from electric- to gas-powered modes, but said the vehicles felt a little underpowered at highway speeds. The light steering feedback will likely feel better around town than on the open road. In addition, some reviewers also commented that the regenerative braking system made it feel as though the brakes were grabbing, at times.

Beyond their differences in performance and fuel economy, the Sonata Plug-in Hybrid and Sonata Hybrid closely mirror each other, offering the same basic design and features, although the Plug-in Hybrid is overall better equipped than the Hybrid. Like the Hybrid, the Plug-in Hybrid comes in Base and Limited trims, with standard interior features like heated front seats, an 8-way power-adjustable driver's seat, dual automatic temperature control, a leather-wrapped steering wheel, and an auto-dimming rear-view mirror. The Limited trim upgrades to leather upholstery, ventilated front seats, a 6-way power-adjustable passenger seat, woodgrain interior accents, and adaptive cruise control with start/stop capability.

New for 2017, the Sonata Plug-in Hybrid receives a larger 8-inch touchscreen with standard navigation, replacing the previous year's 7-inch touchscreen (which remains in the Hybrid). In addition, Hyundai adds a number of connectivity features like Apple CarPlay and Android Auto to the standard equipment list. Both trims come with HD Radio, a subwoofer for the audio system, Bluetooth, voice recognition, and a unique instrument cluster with a charge indicator and other readouts that provide important vehicle information. Standard safety features include a suite of airbags, a reversing camera, and a blind-spot detection system. The Limited trim further adds forward-collision warning, a lane-departure warning system, and rear parking sensors.

The Sonata Plug-in Hybrid gets a number of new exterior colors for 2017 that help distinguish it from the Hybrid, such as Skyline Blue, Nocturne Black, Hyper White, and Metropolis Gray. Like the Hybrid, the Plug-in Hybrid’s exterior styling is designed to reduce the drag coefficient to 0.24, the best in its class, which helps improve fuel efficiency. A chrome front grille, automatic headlights, power-folding heated side mirrors, LED taillights, a rear lip spoiler, and a hands-free trunk are among the standard exterior features. Both trims ride on 17-inch wheels, and the Limited adds high-intensity discharge (HID) headlights.

While Hyundai builds the Sonata Hybrid at its plant in Alabama, the Sonata Plug-in Hybrid comes out of the automaker's plant in Asan, South Korea. It's available in U.S. showrooms in 10 states, including California, Connecticut, Massachusetts, New Jersey, New York, and Oregon, although buyers in any state can order the vehicle from a local dealer. Federal tax credits and incentives will apply to any Sonata Plug-in Hybrid purchased, which should sweeten the deal for drivers who are ready to begin disconnecting from the pump.

What's your take on the 2017 Hyundai Sonata Hybrid Plug-In ?

sameer What is the color of this car???

Users ranked 2017 Hyundai Sonata Hybrid Plug-In against other cars which they drove/owned. Each ranking was based on 9 categories. Here is the summary of top rankings.

Have you driven a 2017 Hyundai Sonata Hybrid Plug-In ?
Rank This Car