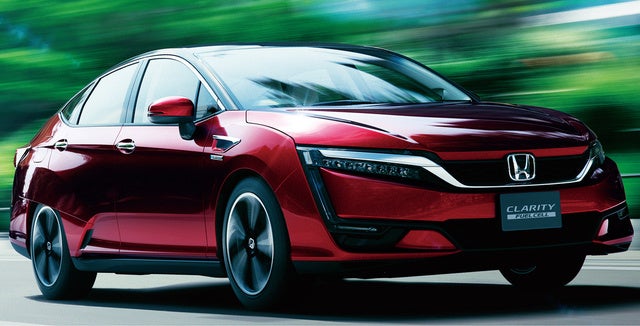 Looking for a Used Clarity Fuel Cell in your area?

For 2017, Honda gives us the Clarity—one car platform powered by three very different fuel types. The Clarity midsize sedan is the first car in the world to be offered as either a plug-in hybrid, battery electric, or hydrogen fuel-cell vehicle (FCV). This flexibility is possible thanks to its modular design and electric motor. No matter which fuel source you choose—batteries, a small gasoline engine paired with batteries, or a hydrogen-powered fuel cell—each version is essentially the same car.

The first Clarity to hit the market will be the Clarity Fuel Cell. It features a 174-hp electric motor powered by a hydrogen fuel cell, which combines hydrogen and oxygen to produce electricity. You can learn more about this technology by reading CarGuru’s guide to alternative fuels.

Although the Clarity Fuel Cell will undoubtedly get the most press, Honda expects the plug-in hybrid Clarity to be the best seller. The plug-in hybrid will be available in all 50 states and boasts a 40-mile all-electric range in addition to unlimited mileage from the gasoline engine. The all-electric Clarity will be sold alongside the hybrid and fuel-cell variants and is expected to hit U.S. markets in the summer of 2017.

The Clarity Fuel Cell will be fitted with what Honda calls “premium, environmentally-responsible materials.” The Display Audio infotainment system is compatible with Android Auto and Apple CarPlay, and the center console features a push-button shifter like that in the Acura TLX. The Clarity comes outfitted with LED head- and taillights, a head-up display, and soft-touch upholstery. The Honda Sensing active-safety suite is standard and includes lane-departure warning, collision-mitigating braking, and forward-collision warning.

What's your take on the 2017 Honda Clarity Fuel Cell?

Have you driven a 2017 Honda Clarity Fuel Cell?
Rank This Car

Looking for a Used Clarity Fuel Cell in your area?