A new brand in the luxury segment makes a splash, but is it enough for you to give up the traditional luxury names? 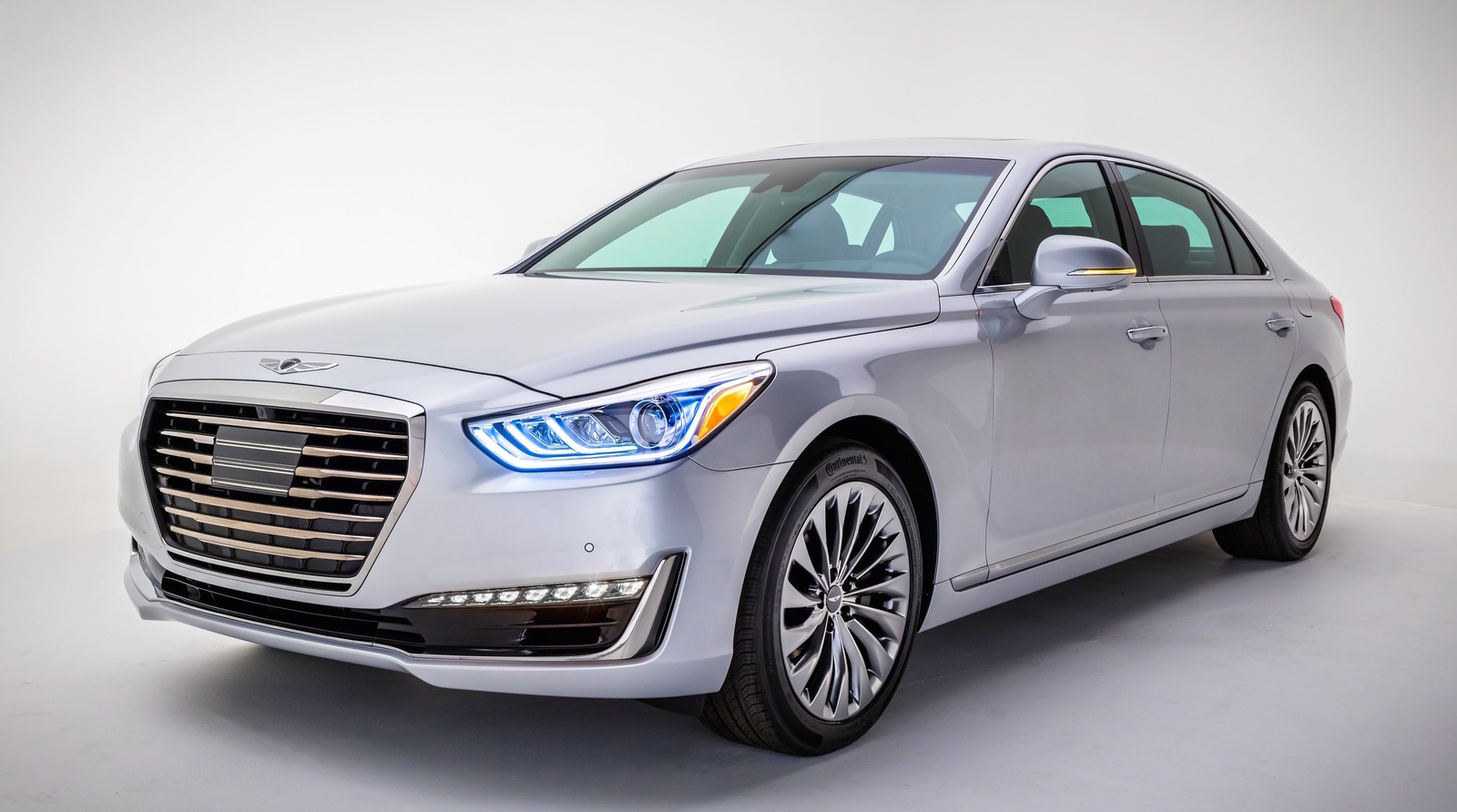 In the beginning, there was just Hyundai, but then the Korean automaker did something crazy: The bargain-oriented brand went upmarket. That move was the culmination of years of delivering more refined and competent cars. But when the Hyundai Genesis arrived in 2008, it turned heads. The larger Equus followed it, and the two were spun off from Hyundai into their own brand, like Frasier was spun off from Cheers. And just like Frasier, the Genesis brand eschews the riffraff and focuses on the finer things in life. Hyundai now calls both cars Genesis and further divvies them up with G80 (the former Genesis model) and G90 (the car formerly known as the Equus).

The G90 is the larger of the two, and it has made quite an impression, delivering the large luxury experience for $30,000 less than the base price of a Mercedes-Benz S-Class. But will that lower price be enough to convince you to ditch a BMW or Mercedes in favor of the newcomer without the luxury name? 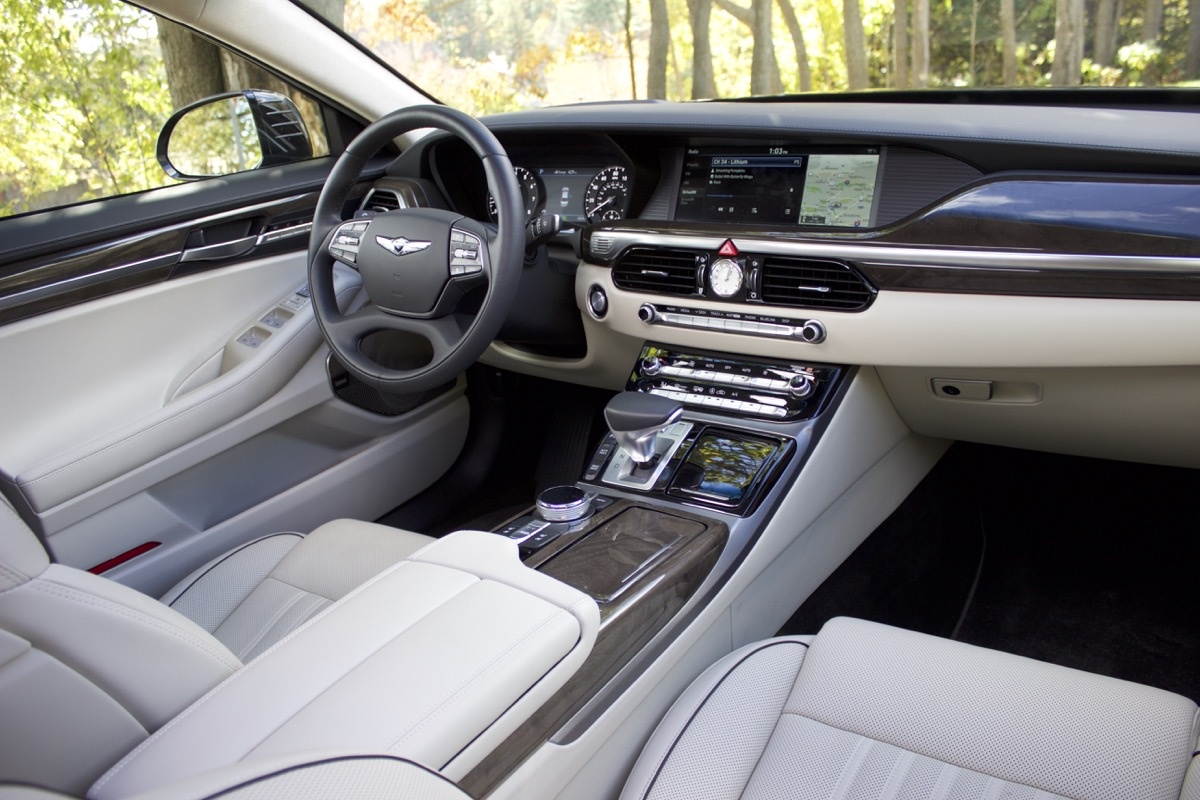 The Equus had a lot of luxury features, but its styling was anonymous, almost like a car in the background of a movie in which the producers didn’t want any name-brand cars present in the shot. That's no longer true with the G90, which takes on the styling of the Genesis G80 and upsizes it.

The G90 features a well-defined trapezoidal grille, framed by menacing headlights. Out back it has taillights similar to the Equus, but also has the look of a Mercedes S-Class if you squint hard enough. It also has an integrated dual exhaust and 19-inch alloy wheels, capping off its upscale exterior look.

Inside, the G90 features a broad, expansive interior, with clean lines that further accentuate its size. The bright leather contrasts with dark wood and stitching on the dash. The dash itself is firmer than it looks. At first glance, it looks like padded leather, but when you press it, it feels cheaper. Not a huge deal, but when the G90 is inviting comparisons to the Mercedes-Benz S-Class or even the BMW 7 Series, these details matter. The suede/alcantara headliner rights the ship immediately, as do the LED interior cabin lights.

The center console features many controls, but there is logic to its layout. The luxury credentials reveal themselves in the form of supremely comfortable seats with attractive stitching. These seats are very soft and would be a welcome place to park your derriere for a long road trip.

The same can be said for the rear seats, as the G90 delivers comfort in both rows, with impressive legroom, front and rear. Headroom was just starting to become an issue for my 6-foot-3-inch frame, but most occupants will have more than enough headroom. The rear seats also have a fold-out center console with climate and audio controls.

There are two trims of the G90, Premium and Ultimate. We drove the Premium trim, which includes automatic high beams that bend with the road, leather seating and dash, wood trim accents, a 22-way power driver's seat, 16-way power front passenger seat, heated and ventilated front seats, heated rear seats, 7-inch color instrument panel trip computer, 12.3-inch center navigation/infotainment screen, three-zone automatic climate control, power rear trunk with hands-free function, and auto-close doors (you let the door get close to closing, and it latches and secures the door on its own). The Premium also comes with a head-up display and a Lexicon 17-speaker premium audio system, which features visually stunning speakers built into the doors.

How do you top that? The Ultimate ups the ante with ventilated rear seats, power reclining rear seats, dual rear touchscreens, rear-seat illuminated vanity mirrors, and two extra cylinders under the hood. 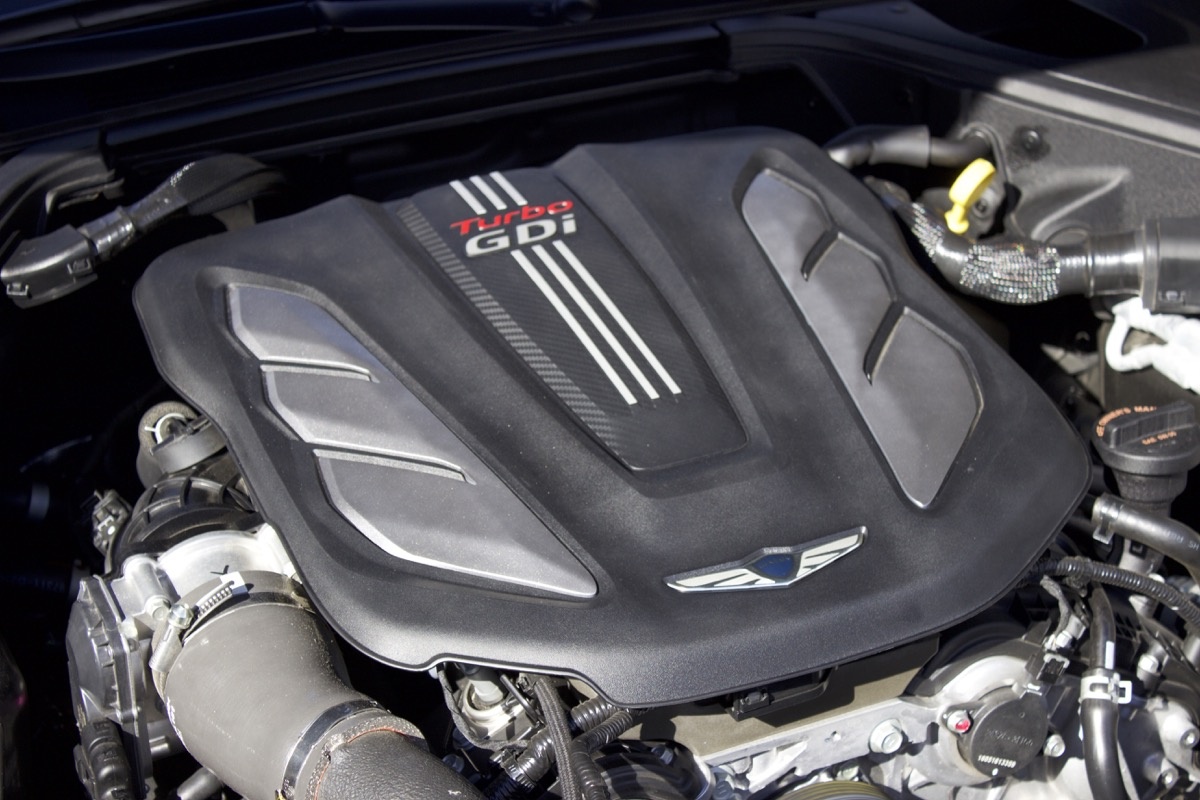 Power is sent through an 8-speed transmission to rear-wheel drive or available all-wheel drive. You put it in gear using a proprietary shifter designed for the G90. Pull for Drive, push for Reverse, and there’s a separate button for Park.

There’s been a lot of backlash against these types of shifters, and I’m on record saying all shifters should have the same exact layout and design—no matter which brand you are. Getting cute with such a crucial part of driving is irresponsible on the part of the automaker, and people have already died as a result of it. We hope future versions of the G90 will move back to a plain old shifter.

No matter what mode you're in, the G90 soaks up any bump, groove, or general imperfection in the road. Sport brings a bit less body roll to the table, but if you want more poised cornering, go for the smaller G80, which is said to compete with the BMW 5 Series and Mercedes-Benz E-Class.

The EPA rates the Genesis G90 with the V6 at 17 mpg city, 24 highway, 20 combined. Over the 1,000 miles elapsed on the trip odometer (likely other journalists driving for a week at a time over the last several months), the Genesis Premium I drove has gotten 19.3 mpg. 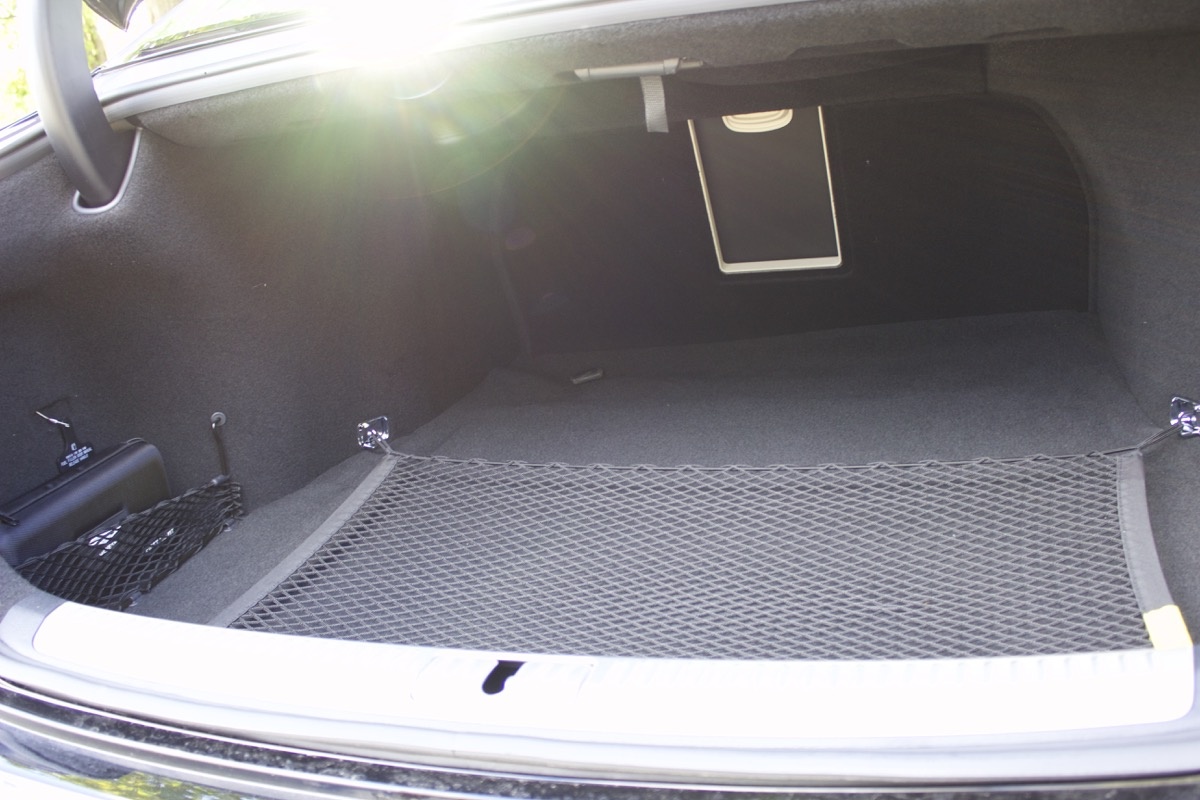 Have we told you how comfortable the G90's seats are? In addition to providing good support, they offer plenty of range in motion, and even as tall as I am, I had to move the seat forward the first time I sat in the car.

While there are no cupholders in the doors, there are two deep ones in the center console. Above those is a perfect cubby next to the shifter that's the exact size of your smartphone and has USB/auxiliary ports, and it also has a Qi wireless charging pad, if your phone is compatible.

The G90 also has traditional climate controls, and there are conventional knobs for the radio and volume. It offers easy access to the heated-seat buttons, heated-steering-wheel button, and rear window-shade button. The driver’s button pad lets you operate all the rear side shades, and on top of that, both rear passenger seats feature a window/shade button for both sides. That means you won’t have to reach over if the sun gets in your eyes from the far side.

One note: The rear seats are comfy, but that means they do not fold flat for large items. A hatch that opens between the rear seats won’t accommodate large items, but you can fit skis or a rolled-up carpet through the portal. 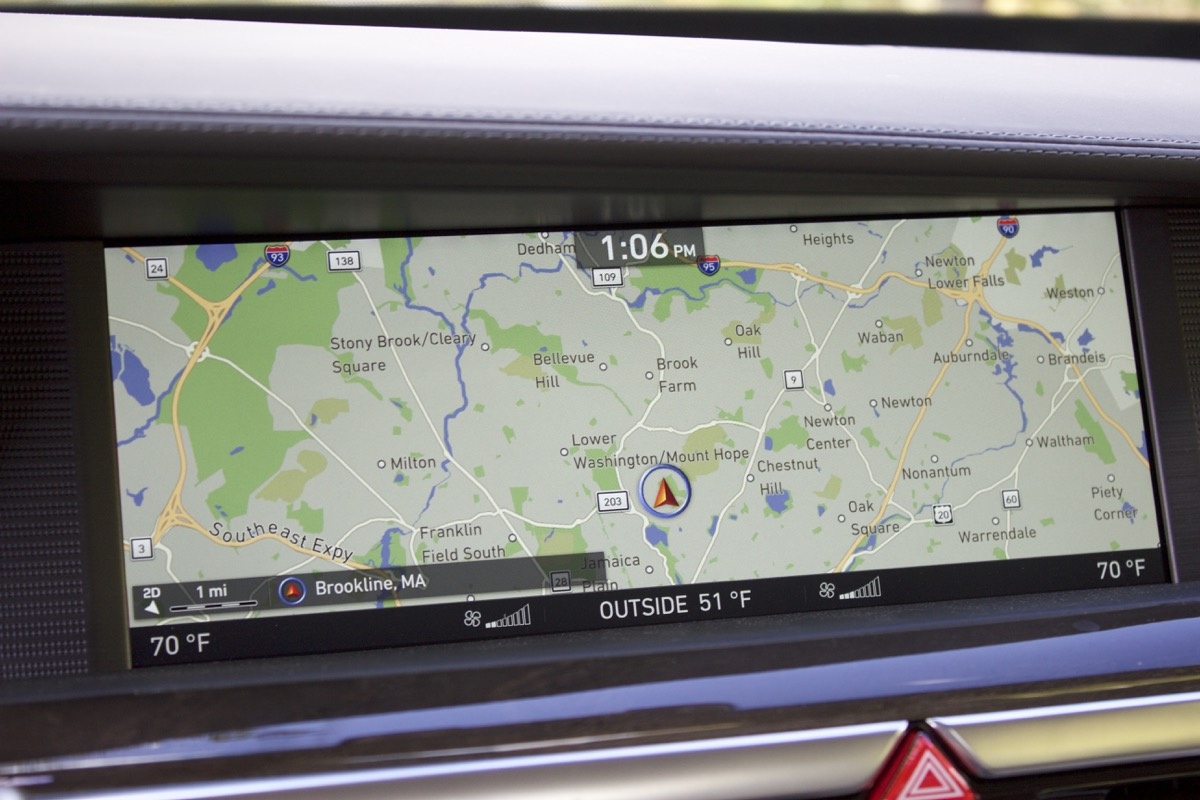 Hyundai's infotainment systems are among the best in the business, but for the Genesis the automaker took away one of the best attributes of its infotainment system—the touchscreen. In Hyundai's defense, the screen is massive and has vivid graphics, but if you hit the OK button when the car starts, nothing happens. Instead, you use the large rotary controller in the center console. But that used to be a redundant controller. At least some redundant button controls are left, including knobs for audio-system volume and channel.

The menu layout is very well thought out, and Home and Back buttons make navigation easier. For entering an address or more complex controls, the voice-control system is very comprehensive and can understand long addresses.

In a clever move, when you put the G90 in reverse, the surround-view camera comes on, but the rear sunshade also lowers for better visibility. Combined with the head-up display, the G90 goes to great lengths to provide the driver with maximum information and minimum distraction. 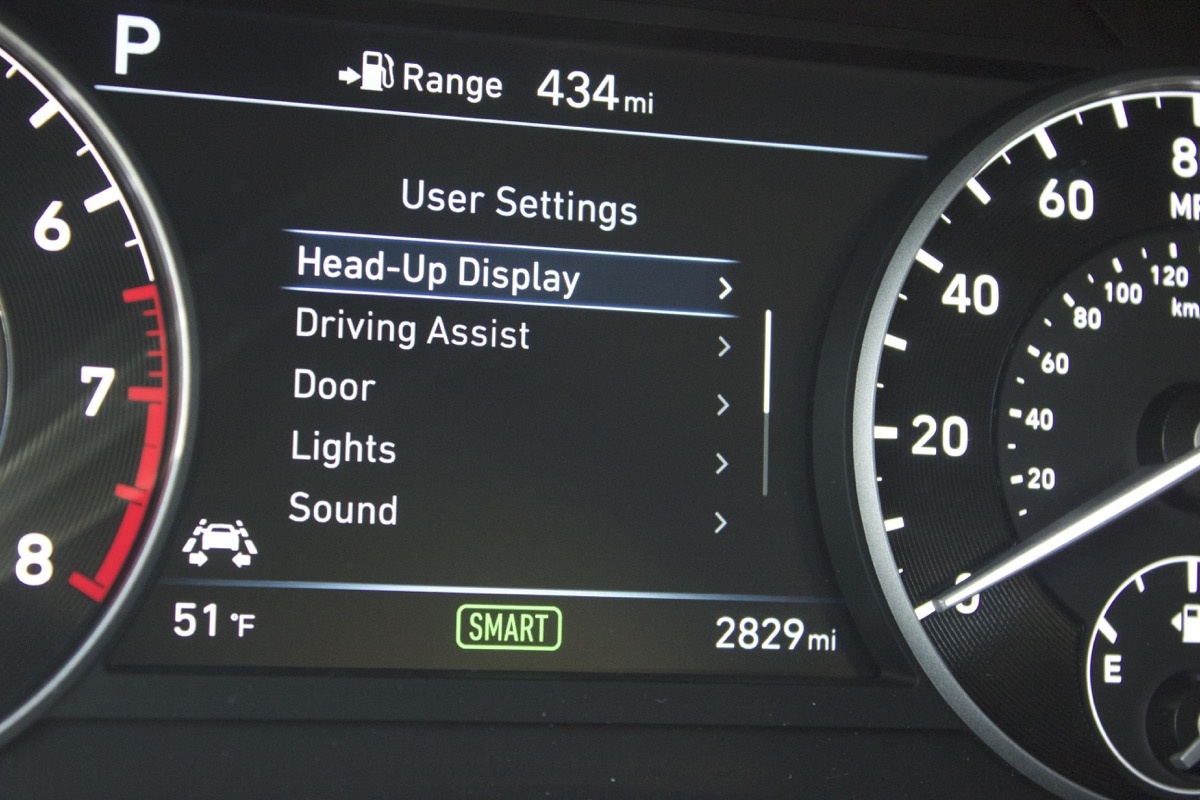 The G90 comes standard with 9 airbags, automatic emergency braking with pedestrian detection, a blind-spot detection system with rear cross-traffic alert, lane-departure warning, and lane-keeping assist. When you combine the lane-keeping assist with the standard automatic cruise control, the G90 can almost drive itself down the highway, though you'll need to keep one hand on the wheel for it to work. That’s probably for the best.

And rest assured that you won’t zone out when in this driving mode. The G90 has driver-attention alerts, which, through some combination of sensors and driver input, can sense when you are becoming sleepy or distracted and suggest you pull over. 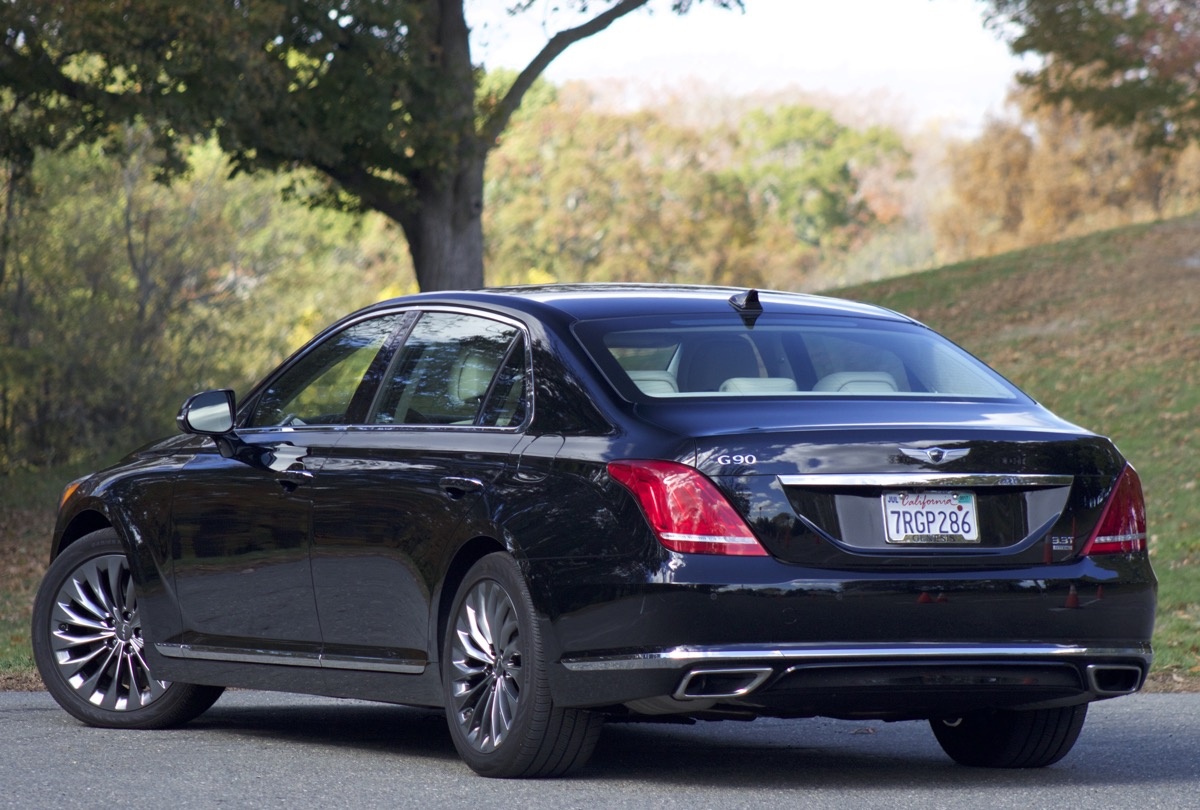 Compare that to the BMW 7 Series, which starts at $81,500, and the Mercedes-Benz S-Class, which starts at $96,600. Add a few options and pricing clears $100,000. The 7 Series is more of a driver’s car, and the S-Class is the gold standard in luxury. Genesis can’t beat either at those exact attributes, but if you care about the name and think large sedan pricing is getting out of control, the Genesis G90 is a legitimate alternative and would make for a great luxury livery or black car.

If you want luxury without the price and don’t need a traditional name on your car, the Genesis G90 is a newcomer we're happy to welcome to the luxury segment.

mailjunker22 I find that not having massage seat in the rear and backseat video is ridiculous when their clear intention is to make the g90 a chauffer car for executives.

Users ranked 2017 Genesis G90 against other cars which they drove/owned. Each ranking was based on 9 categories. Here is the summary of top rankings.

How Reliable Is 2010 Hyundia Genesis ?