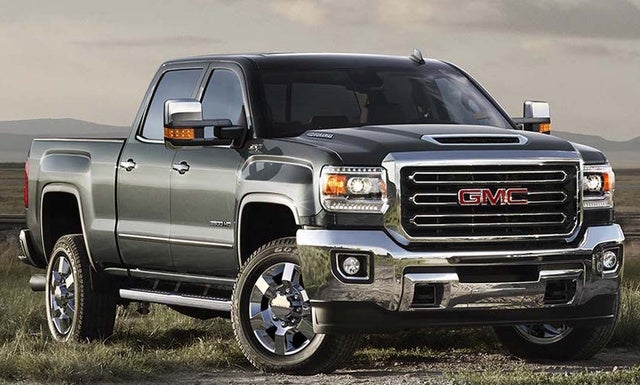 Looking for a Used Sierra 3500HD in your area?

Got a full-size fifth-wheel trailer to haul around? The GMC Sierra 3500HD will tow it with no problem. And once you set that trailer on its pad, this full-size heavy-duty pickup will be ready to take you off-roading in the mountains, on a sightseeing tour, or even to the theatre without seeming out of place. Since its 2007 debut, the Sierra 3500HD, with its hefty payload capacity and multiple cab configurations, has schlepped countless crews and their equipment around American construction sites. Its increasingly luxurious appointments now make it an appealing option for the site foreman’s family, as well.

For 2017 the Sierra 3500HD is available in four trim levels: Base, SLE, SLT, and Denali. It offers three cabs sizes and two bed lengths: a 2-door, 3-passenger regular cab; a 4-door, 5/6-passenger double cab; and an even roomier 4-door, 5/6-passenger crew cab, with either an 8.2-ft long bed or a 6.6-ft standard bed (available only to single rear-wheel crew cabs). Optional dual rear wheels (DRW) can be added for some extra payload muscle.

A Flex-Fuel (FFV) gasoline-fired 6.0-liter V8 engine is standard on the Sierra 3500HD and combines with a light-duty 6-speed Hydra-Matic 6L90 shiftable automatic transmission to throw down 360 hp and 380 lb-ft of torque. Towing capacity maxes out at 14,600 pounds, and payload maxes at 7,153. This V8 can also be converted to burn compressed natural gas (CNG), but power will drop to 301 hp and 333 lb-ft.

An optional and heavily reworked 6.6-liter V8 turbodiesel powerplant mated with a heavy-duty 6-speed Allison 1000 shiftable automatic transmission tops the list of available upgrades for the 2017 Sierra 3500HD. This V8 puts out 445 hp and 910 lb-ft of torque, which is 48 hp and 145 lb-ft more than the current turbodiesel, and reworked internal parts allow the new mill to run much more quietly, too. Towing capacity with the new engine maxes out at 23,200 pounds and payload at 5,518. A new hood scoop combines with a duct below the front fender to force-feed cool outside air into the turbocharger. This system results in significantly more-efficient performance than the previous engine setup, in which the blower receives tepid air already warmed by the engine compartment. The new intakes are also engineered to more effectively deal with the fine mist kicked up on wet roads that often degrades turbocharger performance. The upgraded air-induction system was tested extensively through the Eisenhower Tunnel, which is perched at 11,153 feet above sea level just outside Denver, Colorado.

GuruV6R12 For night time driving it has the poorest headlight and fog lights I have ever experienced. Owner will have to spend money on up-graded aftermarket lighting to see where you are going during the night.

Users ranked 2017 GMC Sierra 3500HD against other cars which they drove/owned. Each ranking was based on 9 categories. Here is the summary of top rankings.

Looking for a Used Sierra 3500HD in your area?

The lower ball joint on my truck needs to be replaced, how feasible is that to do myself. Does anybody have any advice or tips?

37 views with 4 answers (last answer about a year ago)

I’m over this as well.. add me to the lawsuit. I use my truck to work and I don’t get paid if it won’t run... I’ve had the same problem along with other stuff that as left me with no way to afford...

Why Is There Such A Large Difference In Max Towing Potential Between GM And...