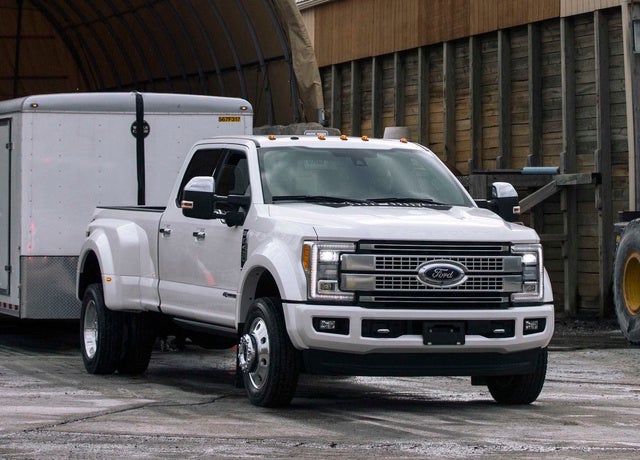 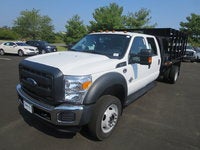 Getting some adult-sized grunt work done means getting serious about your truck, and you can’t get much more serious than the 2017 Ford F-450 Super Duty. This full-size one-and-a-half ton behemoth boasts some prodigious towing and payload numbers by way of its standard V8 turbodiesel power. It also accommodates the whole crew in its roomy and well-appointed cabin, and boasts standard shift-on-the-fly 4-wheel drive (4WD). Of course, finding a garage or parking space to fit this jumbo-sized pickup remains a challenge.

In any case the 2017 F-450 Super Duty is expected to remain available in only the 5/6-passenger, 4-door Crew Cab configuration, while again offering the choice of either a 6.6-foot standard bed or an 8-foot long bed riding atop standard dual rear wheels (DRW). Trims include the XL, XLT, Lariat, King Ranch, and Platinum.

Of the upgrades slated for the 2017 F-450 Super Duty, doubtless the most noteworthy is the debut of a military-grade aluminum body that will save approximately 300 pounds in vehicle weight. The entire Super Duty lineup receives the aluminum body for the 2017 model year, finalizing a highly successful trend that started with Ford’s light-duty 2015 F-150. The Super Duty editions actually gain 14% more aluminum than the top-selling F-150.

Another change for the 2017 Super Duty stable is a frame constructed of 95% high-strength steel, making it 24 times stiffer than the current version. This combination of aluminum body panels and a high-strength steel frame marks the most significant upgrade in the Super Duty brand’s 18-year history.

But wait, there’s more! Further upgrades for 2017 are expected to include a rear-view camera that mounts on the back of a trailer, adaptive cruise control with collision mitigation, an LED bed light, LED spotlights mounted beneath the outside mirrors, and an enhanced version of Ford’s Sync 3 infotainment system. There are also an available surround-view camera, larger brakes and axles, some tweaks to the badges and graphics, and new quad-beam LED headlights and taillights.

The F-450 Super Duty’s standard 6.7-liter turbodiesel V8 powerplant and 6-speed TorqShift automatic transmission might also see improvements, but details for these are not yet available. The V8 currently puts out 440 hp and an impressive 860 lb-ft of torque, good enough to tow 19,000 pounds with the standard tow hitch and over 31,000 pounds with either a fifth-wheel or gooseneck rig installed. The standard part-time 4WD system includes low-range gearing, auto-locking hubs, and an electronic locking rear differential. No EPA mileage estimates are available for this titanic turbodiesel, of course, but rest assured that it will again be delivered with a standard exhaust braking system.

Outside, the 2017 F-450 Super Duty is slated to retain essentially the same styling details as the current version, except done in aluminum instead of steel. Depending on the trim selected, look for 19.5- or 20-inch wheels, a trailer hitch and wiring, heated power telescoping and folding mirrors, the new LED bedlight and mirror-mounted spotlights, and step running boards. All F-450 iterations will also feature auxiliary transmission cooling.

As mentioned, an upgraded version of Ford’s Bluetooth-interfaced Sync 3 infotainment system is slated to come standard aboard the XLT and higher. It's rumored the improved Sync 3 will support both Apple CarPlay audio integration and Android Auto smartphone apps on the 2017 Lariat and Platinum. The King Ranch and Platinum are again expected to add standard GPS navigation.

As for entertainment, look for the entry-level F-450 Super Duty XL to come with an AM/FM radio with 2 speakers, while the XLT adds 2 more speakers, a CD/MP3 player, satellite radio, and an auxiliary audio input. The King Ranch and Platinum sport a 9-speaker Sony premium audio setup with a video monitor and a memory-card slot.

Some of the upcoming year’s F-450 Super Duty editions will offer adaptive cruise control with forward collision mitigation braking. Also slated to debut for 2017 is an optional trailer-mounted rear-view camera, plus the surround-view camera system.

Because of its sheer size, the F-450 Super Duty is not crash tested by either the government or the insurance industry.

Why Are Dealers Allowed To Lie About What Engine Is In A Vehicle On Carguru...