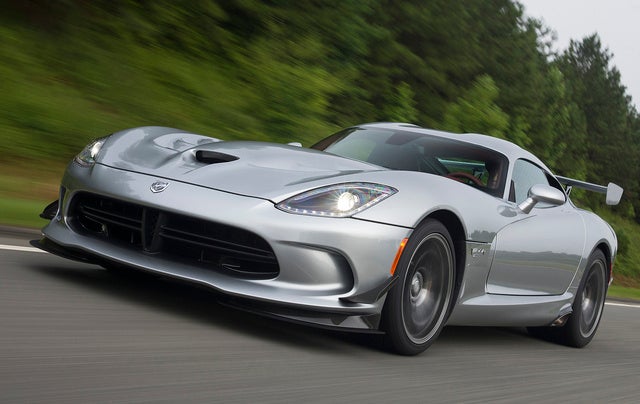 The modern supercar landscape is a space dominated by exotic materials, efficient yet powerful hybrid powertrains, and advanced traction management that can make any driver a hero. But supercars used to be dangerous and could be successfully piloted only by seasoned drivers. That’s the world from which the Dodge Viper first emerged.

The Viper arrived in 1992 and delivered mad power from a V10 engine in a brutish chassis until 2010. At that point it was phased out, only to be revived in 2012 as a whole new snake under the SRT brand, which was then moved back under the Dodge nameplate. That 2012 model in all its glory carries over to this year.

The 2017 Dodge Viper will be the last edition of the Snake, and to commemorate the end of the run, Dodge is offering five special editions and plenty of customization options.

No matter the trim or special edition, you are guaranteed of one thing: The Viper looks like nothing else on the road. And while there have been multiple versions, this last Snake is instantly recognizable as a Viper. Its look is defined by a menacing front end, with mean-looking headlights above Dodge's crosshair grille. That front clip gives way to a hood that seems to go on forever and features all manner of vents and scoops for engine induction and cooling.

Like the Vipers that came before it, the cockpit canopy is rounded, and the roof features a “double bubble" design, giving way to a rounded fastback window and abruptly ending rear with a large spoiler. Ask a 12-year-old to draw a sports car, and this is the shape you might get.

Trims for the Viper are SRT, GT, GTC, GTS, TA, and ACR. The base (if you can call it that) SRT comes with 4-piston Brembo performance brakes, a lightweight performance suspension, 18-inch wheels, and Bluetooth hands-free smartphone connectivity. The GT adds the two-mode performance suspension and five-mode electronic stability control program from the uprated GTS. It also features Nappa leather seats with contrast-color piping, stitching, and alcantara inserts.

Above all else is the American Club Racer model, or ACR. You can tell it from the rest of the lineup by its unique offset racing stripe and massive front splitter and rear spoiler, which you are able to tune to your downforce-craving needs. The ACR also features massive carbon ceramic brake discs that allow for maximum track-day punishment.

Inside, the ACR features a unique Alcantara hand-crafted interior to assist driver stability under high-G loads and an iconic “ACR” dash badge and accent stitching. All other models feature a very driver-centric cockpit, with push-button start and plenty of easter eggs, namely the outlines of the tracks where the Viper holds a record. And if you’re wondering how many that is, the Viper has 13 course records certified by the SCCA—more records than any other car.

The 1:28 Edition ACR is to commemorate the track record of 1 minute and 28 seconds around Laguna Seca Raceway in California. The GTS-R Commemorative Edition ACR recalls the 1998 Viper GTS-R GT2 Championship Edition. The Snakeskin Edition GTC is inspired by the 2010 Snakeskin ACR and features a unique reptilian pattern. The Voodoo Edition ACR calls up the 2010 Voodoo and features a unique visual and aero package. Finally, the Dodge Dealer Edition ACR commemorates some of the highest volume Viper dealers in the country.

For this final year, Dodge is offering the “1 of 1” Customization program. With 16,000 color options, 24,000 custom stripe options, 11 wheel options, and 16 different interior trim options, you can literally get the Viper in 50 million different unique style combinations.

The ACR is also available with an optional ACR Extreme Aero Package. It delivers nearly one ton of downforce at top speed through massive adjustable aero bits, including a carbon fiber rear wing, rear carbon fiber diffuser, and unique hood with removable louvers.

The heart of the Viper is an 8.4-liter V10. It makes 645 horsepower and 600 pound-feet of torque. According to Dodge, that’s the highest torque output of any naturally aspirated sports-car engine in the world. Most modern supercars have Formula-One-style gearboxes with paddle shifters, and manual transmissions are becoming an endangered species, but for the Viper, that’s the only transmission—a 6-speed manual gearbox sending power to the rear wheels.

The Viper's unique track-inspired suspension features 10-setting adjustable Bilstein racing shocks and the ability to adjust up to 3 inches of suspension height for customized cornering ability.

The Viper may be slithering off into the sunset, but that makes the V10 machine no less special. In fact, this final year makes the prospect of owning one rather interesting. You’d own a complete send-up of modern sports cars—a brutish machine from another time that's still sold by dealers… for now.

Chuck_Tela No talk of performance; no convertible; manuel T unique: ONLY Reasons to own a sports car.

Have you driven a 2017 Dodge Viper?
Rank This Car

What Is The Fuel Efficiency For This Car